Aggregate Is an Academic Collective Rewriting the Rules of Architectural Scholarship

What are the challenges of making architectural history and research a collective pursuit? Dissolving disciplinary conventions, Aggregate Architectural History Collaborative is preparing the grounds for a new generation of scholars.

Aggregate is a new approach to architectural scholarship. With representatives from universities all over North America, including Harvard, Pratt Institute, and the University of Toronto, the group emphasizes collaborative research and work.

“I have to minimize you guys for a second,” Meredith TenHoor says, interrupting a Skype conference underway with Timothy Hyde and Michael Osman, architecture historians at MIT and UCLA, in her office at Pratt Institute’s architecture school. Academia’s occupational hazards being known to include astringent rivalries, it’s tempting to interpret “to minimize” as a professor-to-professor put-down. But TenHoor isn’t speaking euphemistically—it’s pertinent that she quote from a colleague’s e-mail and add more voices to the discussion. Hyde and Osman reappear moments later, unperturbed if pixelated. They wanted more ideas mixing too. The conversation recommenced.

The three partners understand the intricacies of on- and offline scholarly communication well. For much of the past decade, together with a small band of rising architectural historians, they’ve led Aggregate Architectural History Collaborative, a forum for collective research devised to overcome the most alienating and intellectually restrictive features of their discipline.

From the start, Aggregate was a social and intellectual project. In 2006, Arindam Dutta, a professor at MIT, convened a group of architectural historians whose work related to processes of what the philosopher Michel Foucault termed “governmentality”—the feedback set of processes that determined societal conduct. Some of the participants were junior professors readying first books, others were completing dissertations; a few had tenure. All sensed a need for different kinds of conversations between historians. “We really wanted community, to engage with people who could push us to new conclusions,” TenHoor recalls. 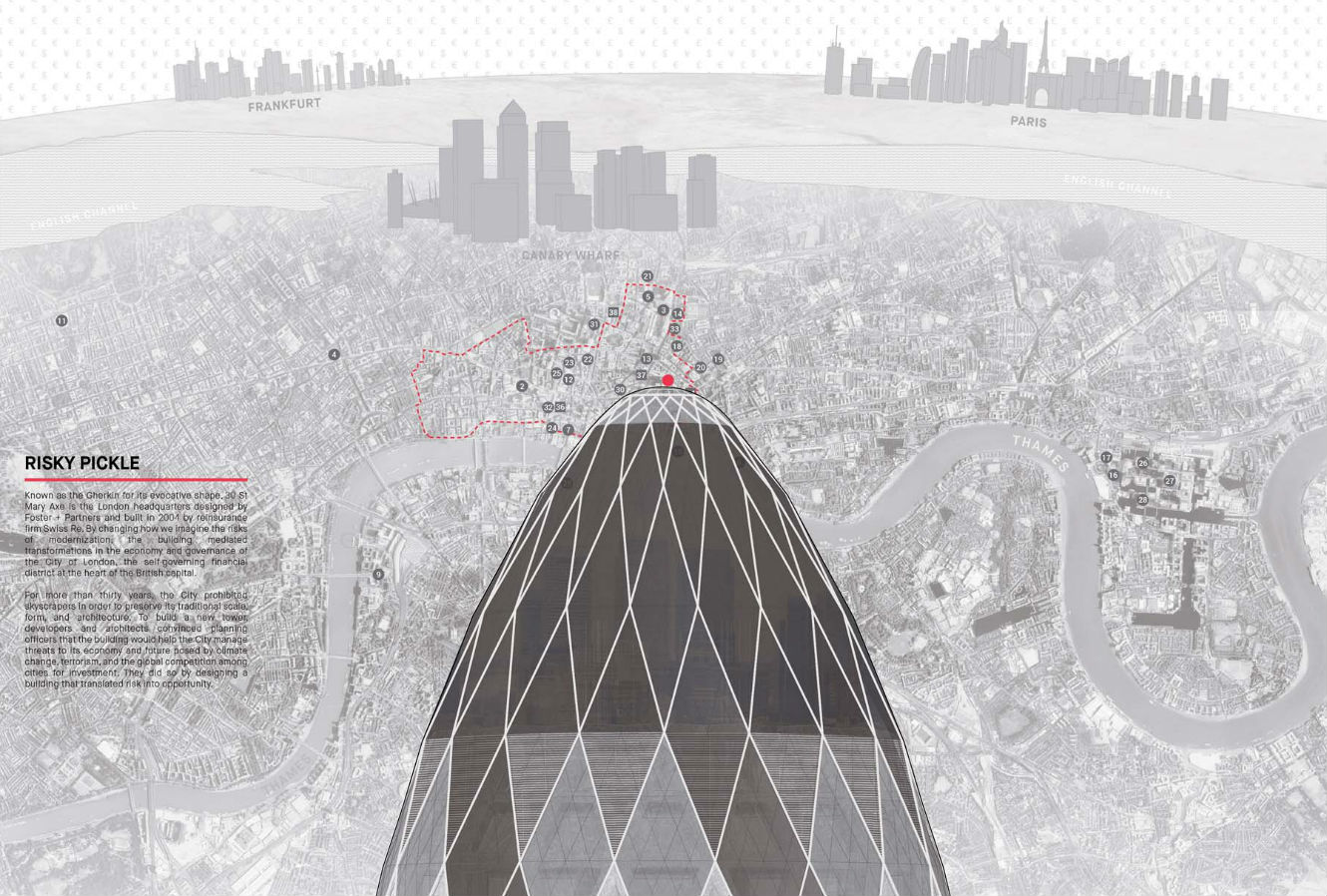 The group’s output is diverse, ranging from academic papers and presentations to analytical drawings, such as Jonathan Massey and Andrew Weigand’s “Risk Design” diagram of London’s Gherkin shown here. (Click for full size.)

And so they began to meet twice a year. They met in places like Syracuse, Cambridge, New York, Los Angeles, and Oberlin, Ohio. They developed a workshop model and transformed the “blind” peer review—that notorious academic gatekeeper—into a more constructive face-to-face process. They argued and laughed and debated and concurred. A book was spawned. Published in 2012, Governing by Design: Architecture, Economy, and Politics in the Twentieth Century (University of Pittsburgh Press) is a collection of ten essays on concerns ranging from ergonomics and urban obsolescence to postwar–France food markets and refugee housing in 1950s Pakistan. Global in outlook and attentive to architecture’s intersection with law, human rights, and financial systems (among lots of other things), the book is Aggregate’s most comprehensive statement thus far. But interpret it as a sharp-edged position cautiously.

“I think it’s a symptom of our field that people want to see Aggregate as a collective with a set theoretical position,” TenHoor responds when asked whom the group’s pushing back against. Hyde, insistent, adds: “We’re not a project of resistance.”

Is the tendency to define a cohort of theorists and historians by adversaries claimed and positions staked really so strange, though? After all, Aggregate does work in a field shaped in lasting, if contentious, ways by an American journal called Oppositions, the theory–heavy house organ of the Institute for Architecture and Urban Studies during the 1970s and early 1980s.

Against these divisive backdrops, however, Aggregate finally gets thrown into relief. The collaborative’s impact isn’t a measure of firm lines drawn or thick walls erected; it’s a matter of the group opting out of the us-versus-them posture altogether. This antipathy for division is less an absolute principle than a prerequisite for the subtler kinds of critique and expanded forms of scholarship Aggregate wants to facilitate. “Before thinking of Aggregate as a position, or a project, you really have to think of it as a process,” Hyde explains. “It is about developing ways to work and write collaboratively, and to engage in critique and review that allow for the unfolding of different kinds of work.” 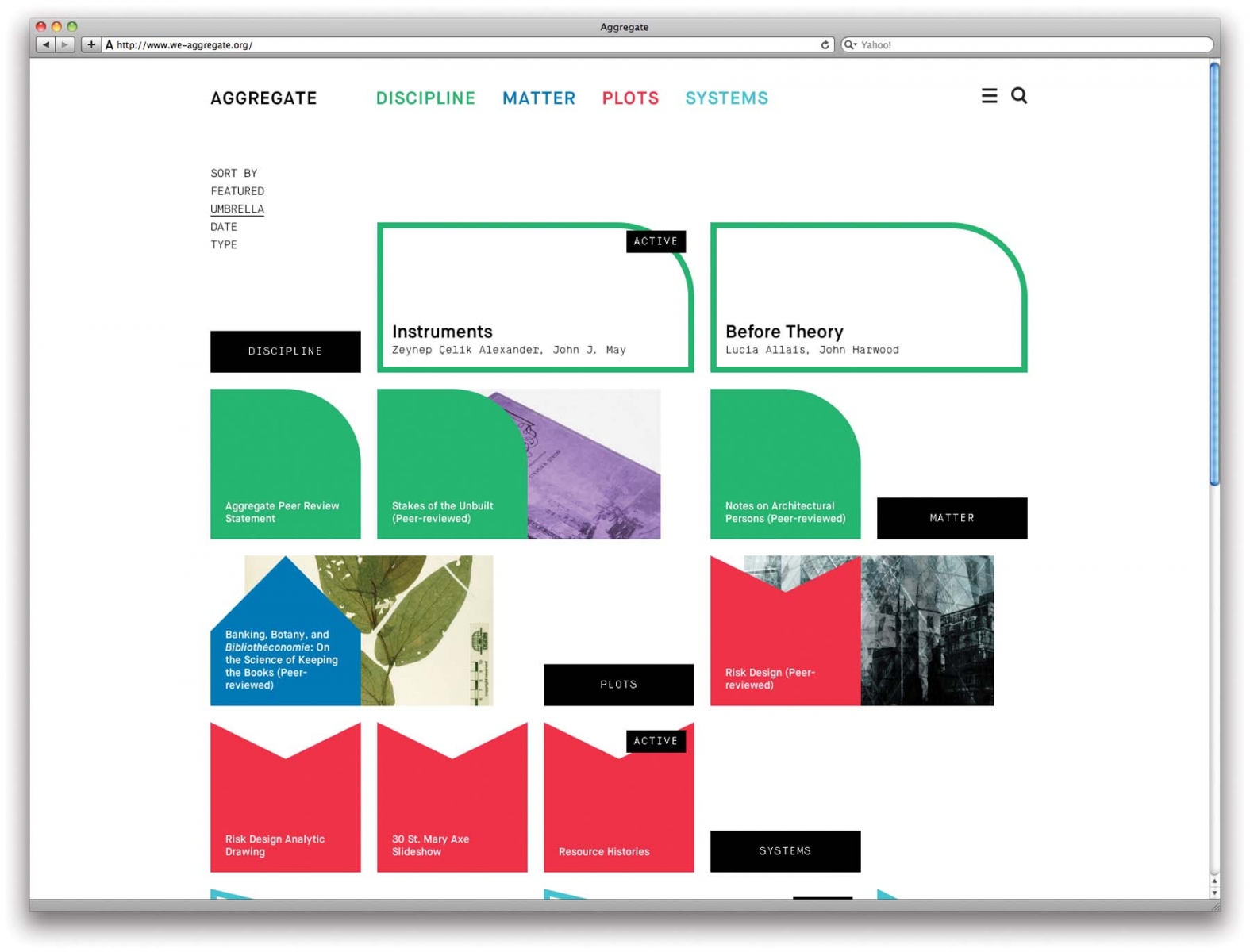 Aggregate’s Web platform, instructively named we-aggregate.org, is vital to these ambitions. Designed by Project Projects and realized through a Graham Foundation grant, the site is organized around four thematic “umbrellas” (Discipline, Matter, Plots, Systems) directed by separate groups of editors. Currently, the published material consists mostly of single-author articles—with the exception of a couple of slide shows and Jonathan Massey and Andrew Weigand’s enormous “Risk Design Analytical Drawing” of London’s Gherkin—but it’s easy to imagine the range of media formats not possible in conventional academic books or journals.

More significantly, the platform operates at a tempo in sync with Aggregate’s open-ended and discussion-centered outlook. As an archive that accrues over time rather than is published all at once, the site accommodates response and invites further participation. It’s perfect, really—so long as it stays shy of perfection. “We don’t know what Aggregate will be,” Osman insists. “And it’s a really important part of it, that level of unpredictable future-ness.”