The famed Pritzker laureate died this morning of a heart attack.

Dame Zaha Hadid, the most important female architect of the 21st century, passed away early this morning. She was being treated for bronchitis in a hospital in Miami, Florida when she suffered a sudden heart attack.

The sixty-five year old, Iraqi-British architect was renowned for her architecture’s daring, sinuous forms. After attending the Architectural Association in London, Hadid established her own practice in London in 1979, Zaha Hadid Architects. She gained recognition in 1983 for The Peak in Hong Kong and, ten years later, for the Vitra Fire Station in Weil Am Rhein, Germany. In 2004, she became the first woman to be awarded the Pritzker Architecture Prize. 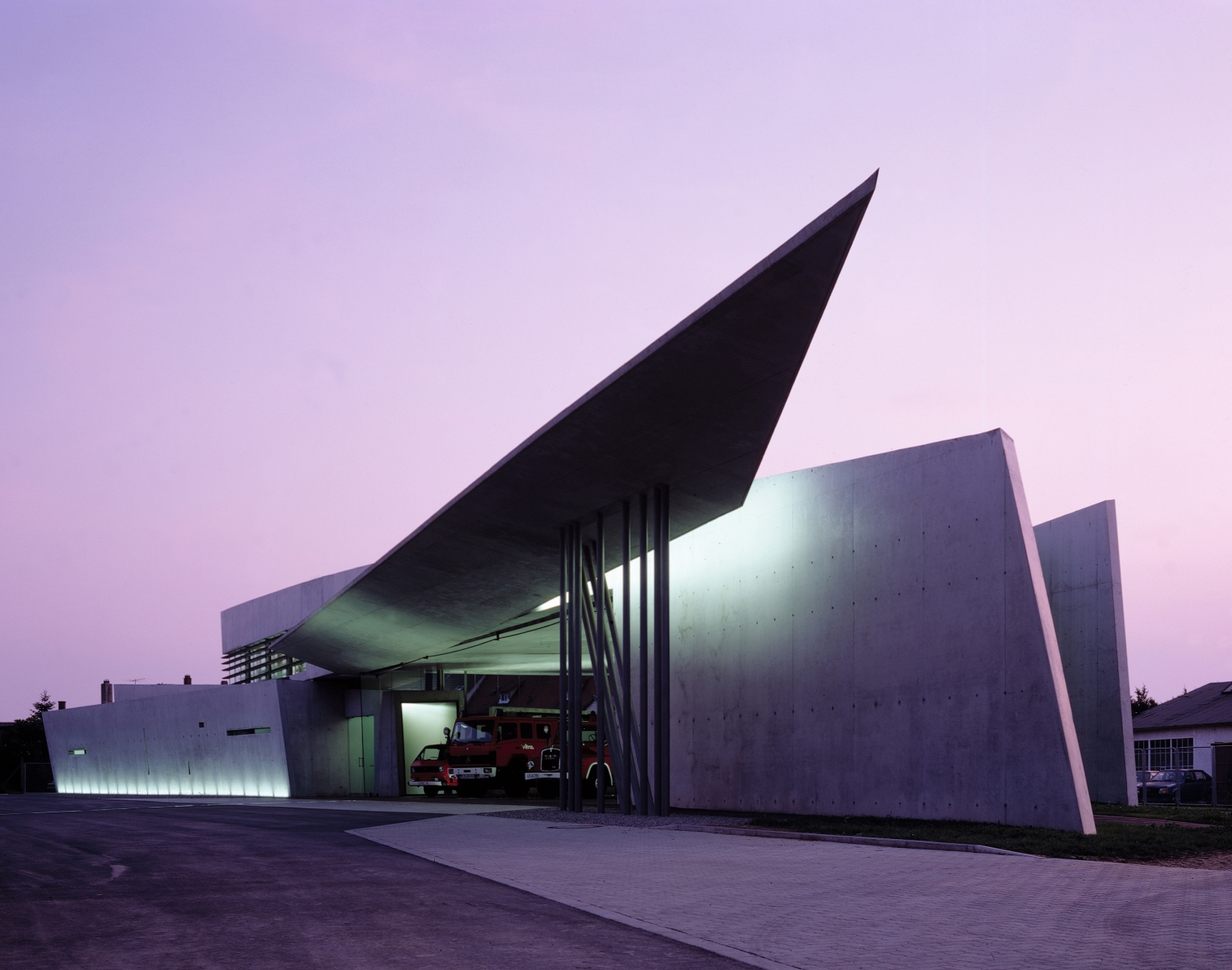 As Hadid began to experiment with innovative technologies and embrace parametric design, along with her office partner Patrik Schumacher, her projects became less angular and more fluid. Some of her most notable projects include the MAXXI: Italian National Museum of 21st Century Arts in Rome (2009), the London Aquatics Centre for the 2012 Olympic Games (2011), and the Heydar Aliyev Centre in Baku (2013). (Scroll down for a selection of her projects from our archives).

In 2016, Hadid won the RIBA’s Royal Gold Medal, the first woman to be awarded the honor. Sir Peter Cook presented a speech to celebrate Hadid’s remarkable life and work. To commemorate this influential architect, here is an excerpt from that speech:

“For three decades now, she has ventured where few would dare: if Paul Klee took a line for a walk, then Zaha took the surfaces that were driven by that line out for a virtual dance and then deftly folded them over and then took them out for a journey into space. In her earlier, ‘spiky’ period there was already a sense of vigour that she shared with her admired Russian Suprematists and Constructivists – attempting with them to capture that elusive dynamic of movement at the end of the machine age. Necessarily having to disperse effort through a studio production, rather than being a lone artist, she cottoned–on to the potential of the computer to turn space upon itself. Indeed there is an Urban Myth that suggests that the very early Apple Mac ‘boxes’ were still crude enough to plot the mathematically unlikely – and so Zaha with her mathematics background seized upon this and made those flying machine projections of the Hong Kong Peak project and the like.

Meanwhile, with paintings and special small drawings Zaha continued to lead from the front. She has also been smart enough to pull in some formidable computational talent without being phased by its ways. Thus the evolution of the ‘flowing’ rather than spikey architecture crept up upon us in stages, as did the scale of her commissions, but in most cases, they remained clear in identity and control. When you entered the Fire Station at Vitra, you were conscious of being inside one of those early drawings and yes, it could be done. Yet at perhaps its highest, those of us lucky enough to see the Heydar Aliyev Center in Baku in the flesh, can surely never have been in such a dream-like space, with its totality, its enormous internal ramp and dart-like lights seeming to have come from a vocabulary that lies so far beyond the normal architecture that we assess or rationalize.

So we are presenting her with this Medal as a British Institution: and as a Dame Commander of the Order of the British Empire: thus she might seem to be a member of our British Establishment. Yet in reality, many of our chattering classes and not a few fellow architects have treated her with characteristic faint praise, and when she heroically won the Cardiff Opera House competition, blocking the scheme. Or when we awarded her the RIBA Stirling Prize for the school in South London – her second win in a row – we, the jury, were loudly derided by a number of distinguished architects. Of course, in our culture of circumspection and modesty her work is certainly not modest, and she herself is the opposite of modest. Indeed her vociferous criticism of poor work or stupidity recalls the line-side comments of the tennis player John McEnroe. Yet this is surely characteristic of the seriousness with which she takes the whole business: sloppiness and waywardness pain her and she cannot play the comfy British game of platitudinous waffle that is the preferred cushion adopted by many people of achievement or power. Her methods and perhaps much of her psychology remain Mesopotamian and not a little scary: but certainly clear. As a result, it is perhaps a little lonely there up at the top, surrounded now by some very considerable talent in the office, but feared somewhat and distanced from the young.

Yet in private Zaha is gossipy and amusing, genuinely interested in the work of talented colleagues who do very different architecture such as Steven Holl, and she was the first to bring to London talent such as Lebbeus Woods or Stanley Saiotowitz. She is exceptionally loyal to her old friends: many of whom came from the Alvin Boyarsky period of the Architectural Association:  which seems to remain as her comfort zone and golden period of friendship. Encouraged and promoted at an early age by Boyarsky, she has rewarded the AA with an unremitting loyalty and fondness for it. The history of the Gold Medal must surely include many major figures who commanded a big ship and one ponders upon the operation involved that gets such strong concepts as the MAXXI in Rome – in which the power of organization is so clear – or the Bergisel Ski Jump in Innsbruck where dynamic is at last captured – or the Aquatics Centre for the London Olympics where the lines diving boards were as fluid as the motion of the divers – made into reality. And she has done it time and time again in Vienna, Marseilles, Beijing and Guangzhou. Never has she been so prolific, so consistent. We realize that Kenzo Tange and Frank Lloyd Wright could not have drawn every line or checked every joint, yet Zaha shares with them the precious role of towering, distinctive and relentless influence upon all around her that sets the results apart from the norm. Such self-confidence is easily accepted in film-makers and football managers, but causes some architects to feel uncomfortable, maybe they’re secretly jealous of her unquestionable talent. Let’s face it, we might have awarded the medal to a worthy, comfortable character. We didn’t, we awarded it to Zaha: larger than life, bold as brass and certainly on the case. Our Heroine.”

We are all shocked and devastated that we lost Zaha today, a most beautiful individual, talent, leader and friend … many thanks to all of you who express their sympathy and share this moment of grief with me!

Of the many prescient things Rem Koolhaas has written, few are as spot on as this transcript from his days Zaha’s tutor…

We mourn the loss of Zaha Hadid, a member of the Vitra family. pic.twitter.com/ehvPSavu9w

RIP Zaha Hadid. For the Peak drawings alone she would have been famous. That she went on to build was truly amazing: pic.twitter.com/fkSwuFEQ9z 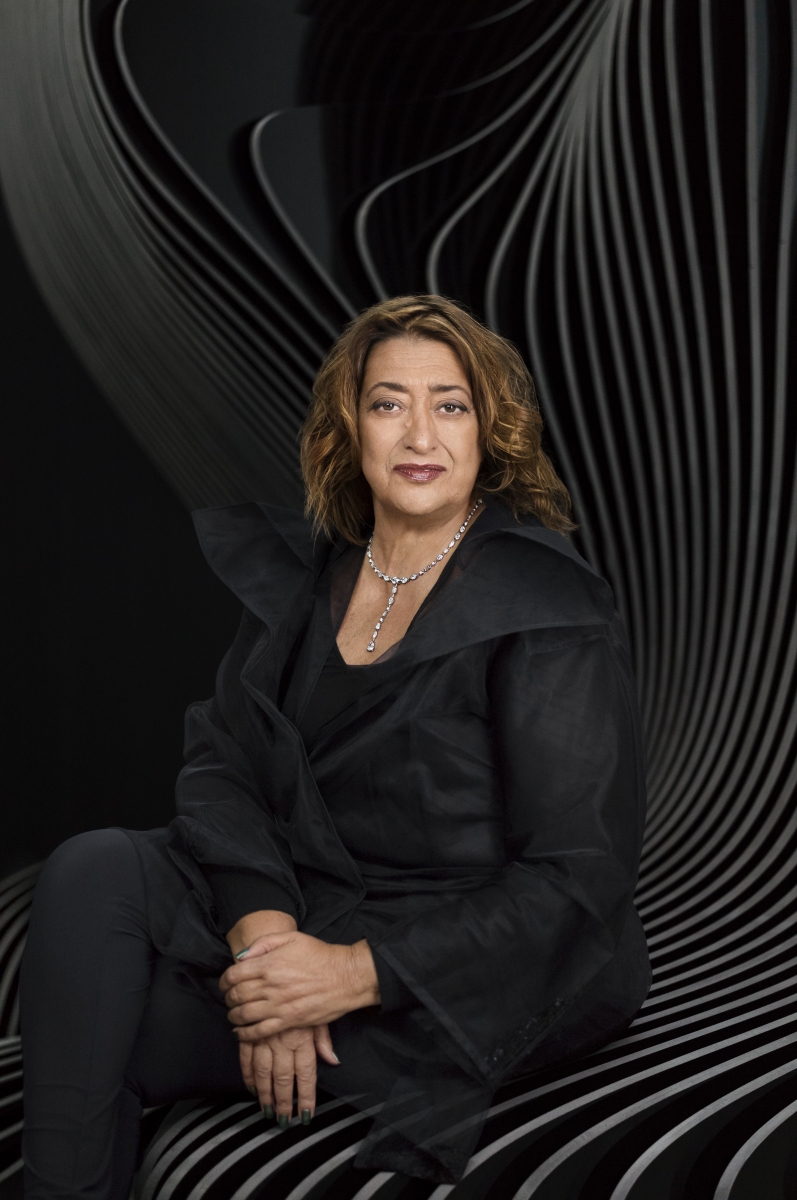 Read more on Zaha Hadid in our archives:

Paul Goldberger’s review of Hadid’s Guggenheim exhibit, in which he compares her to Frank Lloyd Wright.

“Hadid, like Wright, is a brilliant designer who has encouraged a cult of personality so great that it sometimes gets in the way of seeing her work on its own terms. Like Wright, she has a compelling physical presence, and people tend to think she is bigger than she actually is. She also sees herself as a thinker as well as an artist who creates bold new forms. And she appears to crave renown as much as he did—Wright was, after all, the original starchitect.”

“From some angles, the building, by Zaha Hadid Architects (ZHA), resembles a billowing sail or a coiled mollusk shell. At others, especially from the main facade, the lithe, sinuous walls swoosh like a flying carpet. Frozen in place, yet still something dynamic.” 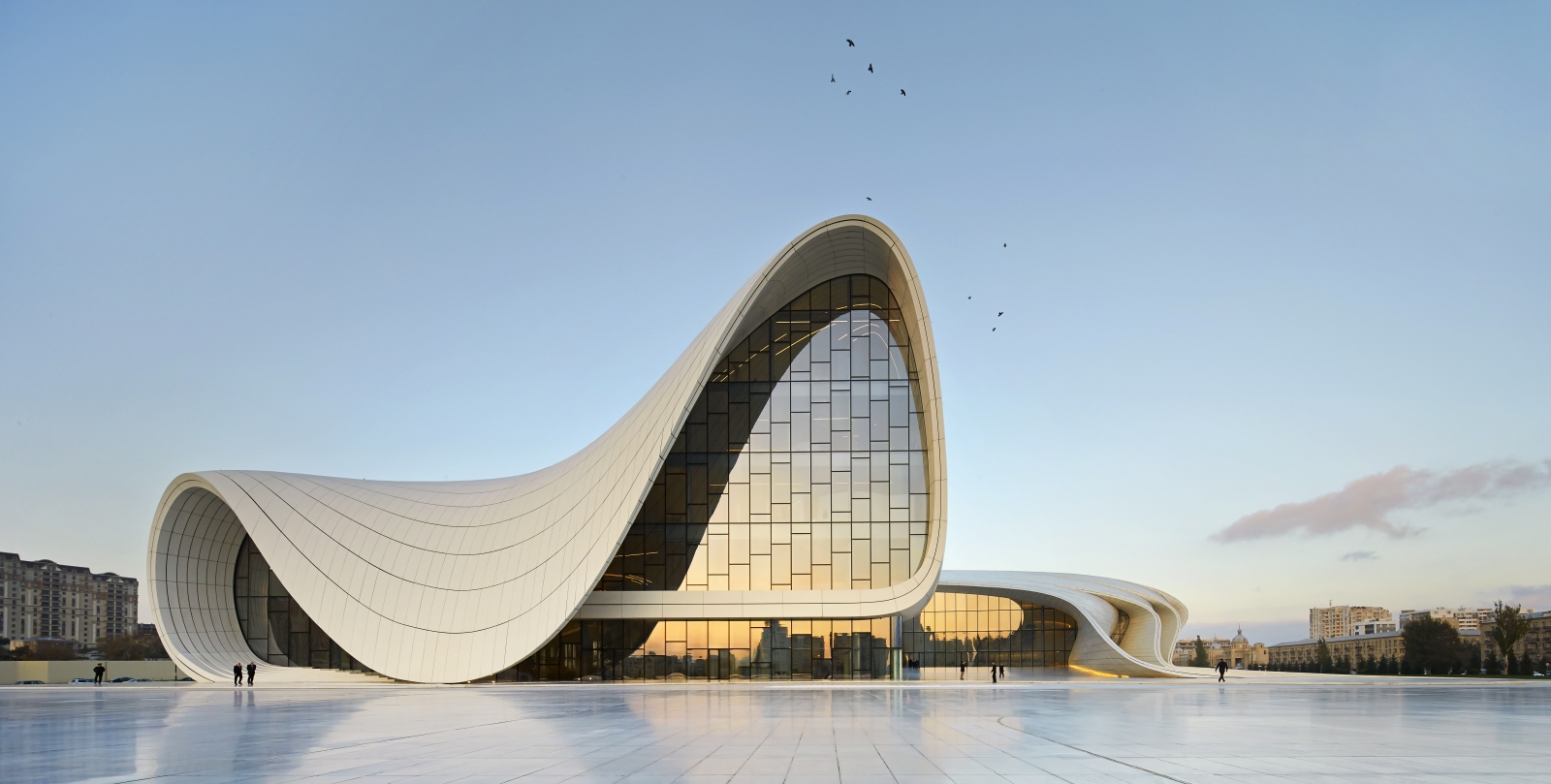 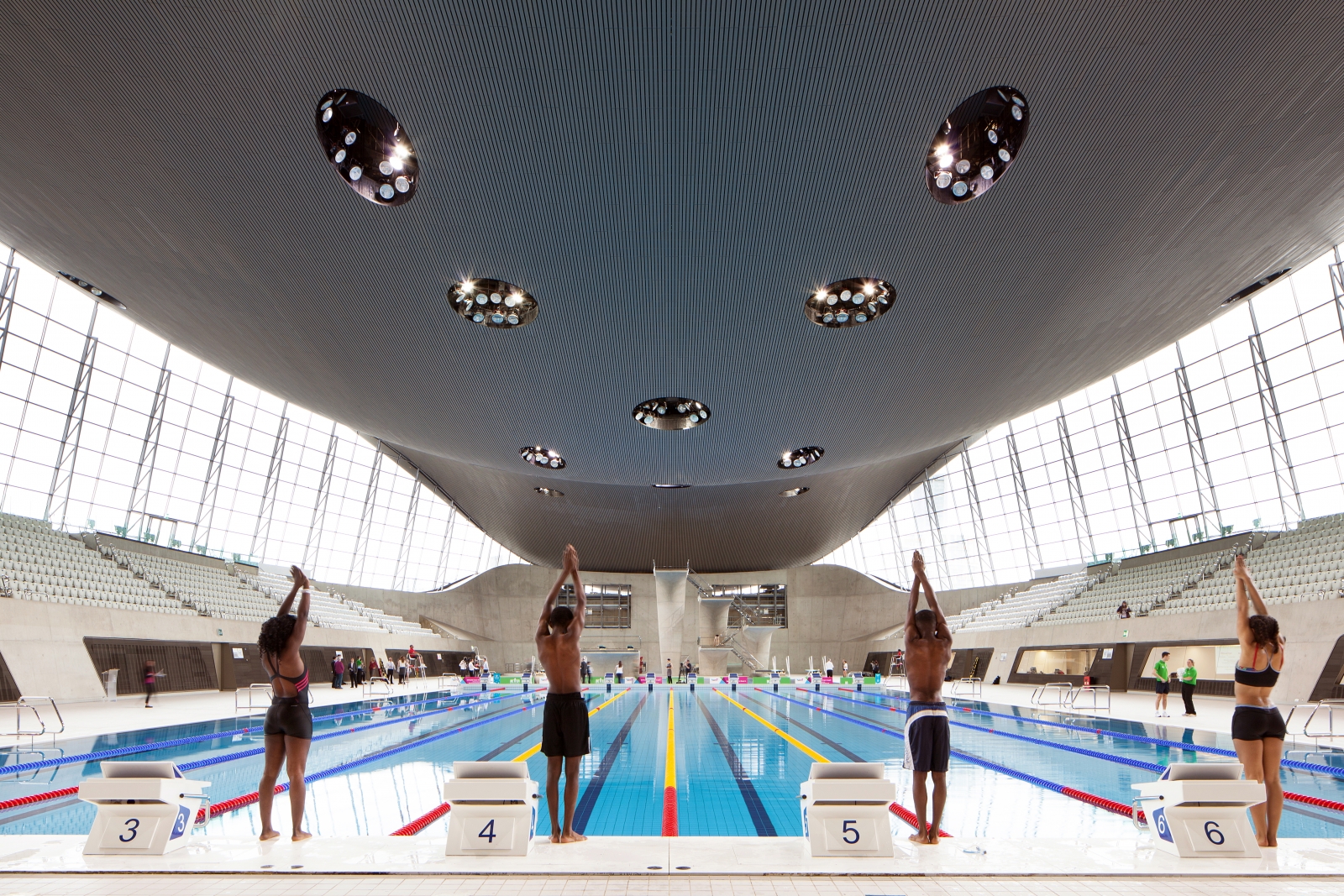 “Some 140,000 cubic feet of earth and rock was dug out of the mountain and deposited atop and along the sides of the museum, giving the impression of a UFO crash-landing. The concrete innards, cast in-situ, echo the surrounding landscape with its fragmented rocks and ice.” 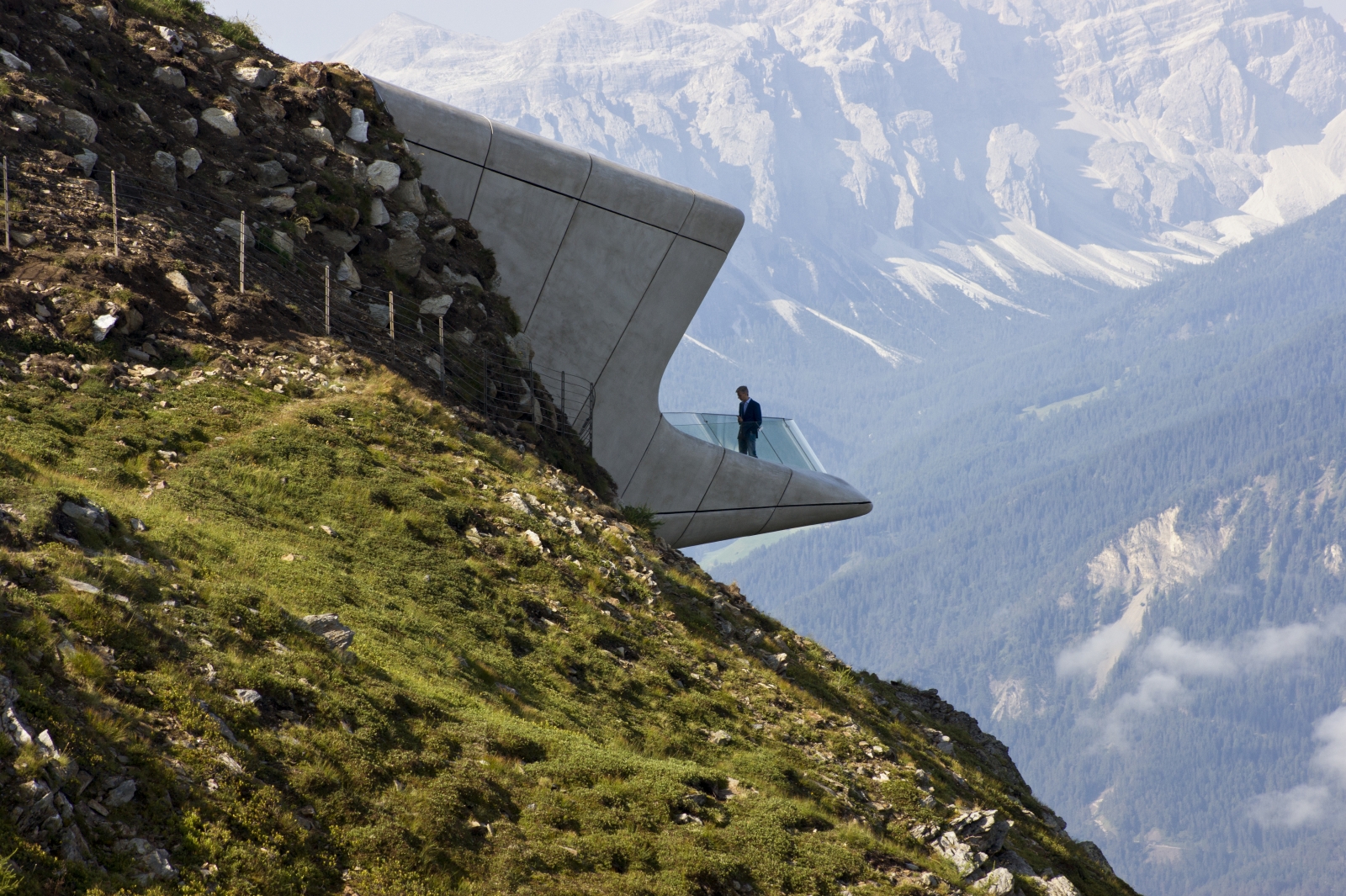 “The exuberant 323,000-square-foot structure, Italy’s first national museum of contemporary art, is more like a world unto itself than a mere building. It is massive in scale and has drunken, fragmented spaces: slanted walls, dizzying elevations, unevenly staggered staircases, steep skateboard-worthy ramps, and extreme cantilevers with precipitous views.” 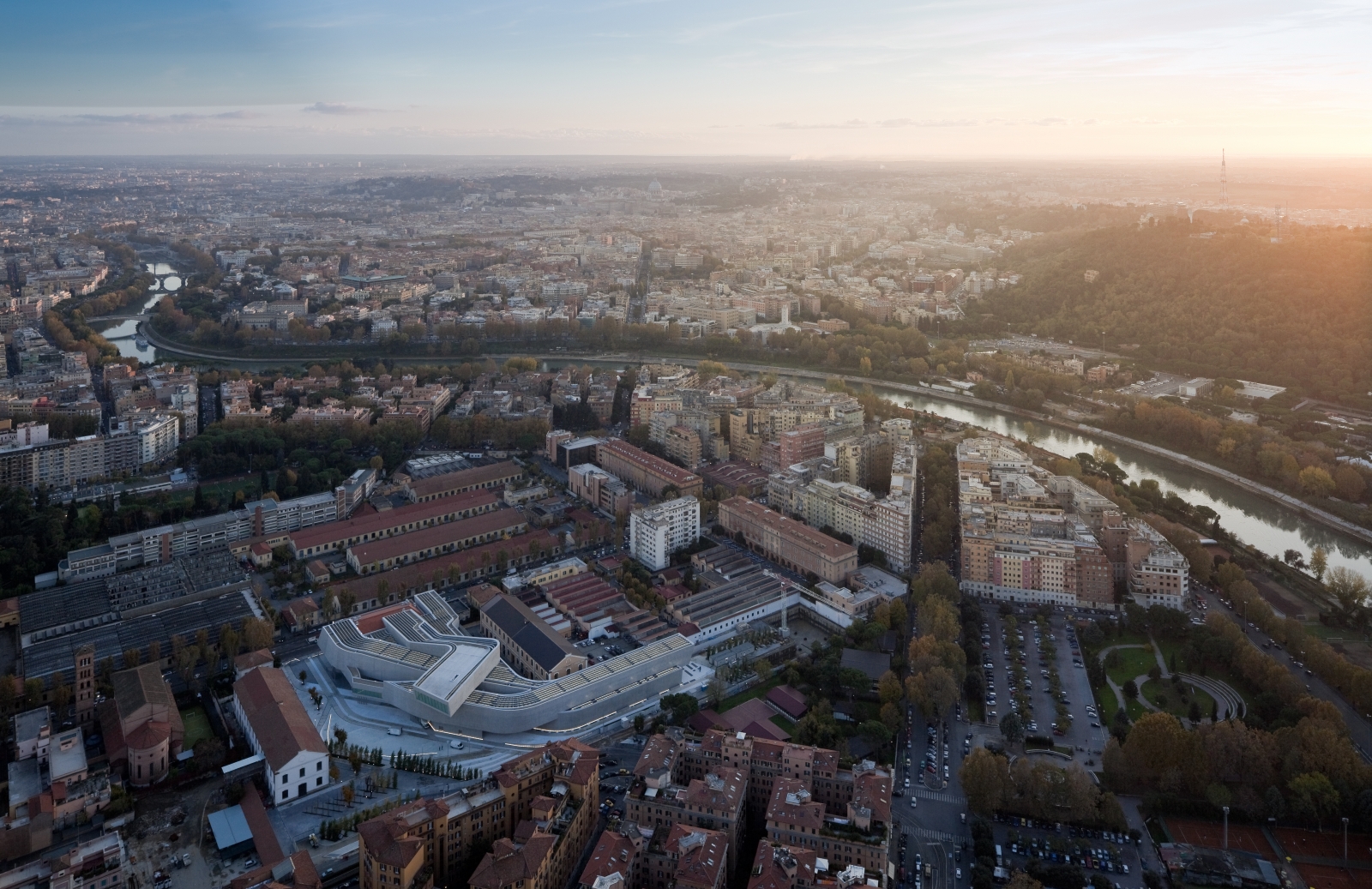 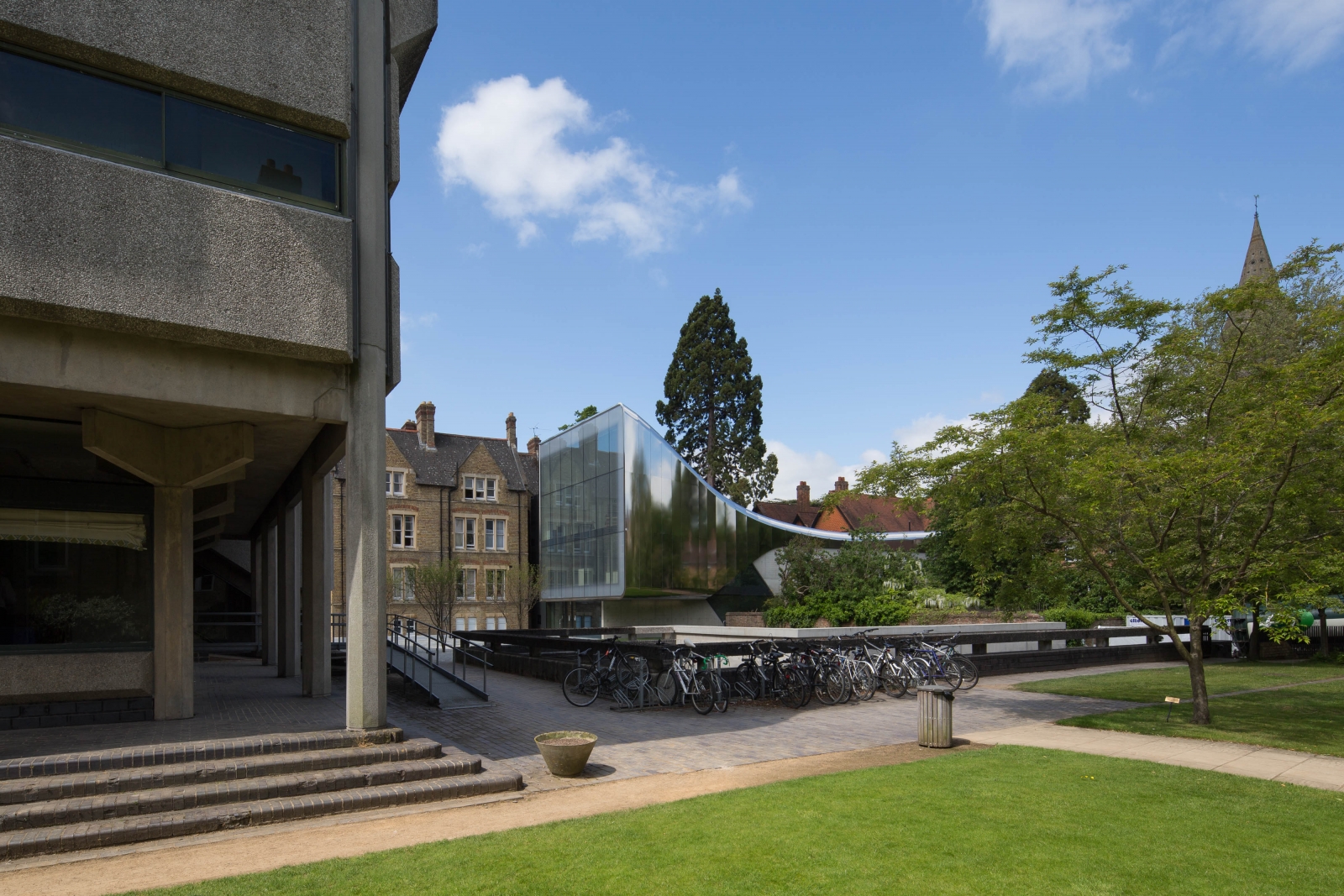 “Unless new research reveals that the Pyramids were designed by Cleopatra—excuse the implicit sexism, it’s just polemical—Zaha Hadid is the most important female architect in history. Yet here I was, not getting any younger as her buildings proliferated around the world, and I admit through veils of shame, I had yet to see one. So it was with great glee and anticipation that I set off to visit her newest work just days before it opened last summer.”