A Park with a Purpose (and Room to Grow)

The latest addition to Lincoln Center provides something the campus has always sorely lacked: a place to sit.

The other day I checked out the latest phase of Diller Scofidio + Renfro’s ongoing facelift of Lincoln Center, a new outdoor-seating area called Barclays Capital Grove (catchy name!) located just north of the Metropolitan Opera House. Although its official opening isn’t until August, the grove has been available for use since May—thankfully, since it offers more of what the Lincoln Center campus has always sorely lacked: public places to sit and meet. The Met’s small lobby is consumed by stairs, and there are only a few benches on the upper floors of Avery Fisher Hall and the David A. Koch Theatre (and none in their lobbies). Outdoors, the limited seating at Damrosch Park means visitors have traditionally had to stand or perch awkwardly on the ledge of a travertine planter. 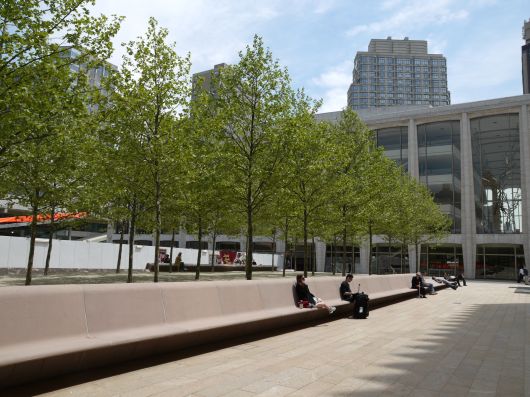 Barclays Capital Grove’s benches are thus a welcome addition—and the chairs and tables coming soon to its now-barren patch of gravel will be an ever bigger improvement. But for now the “grove” itself is a bit anticlimactic. The 30 London Plane trees planted there have yet to grow tall and thick enough for a planned canopy, which will create a natural roof that will be illuminated at night by in-ground lights. 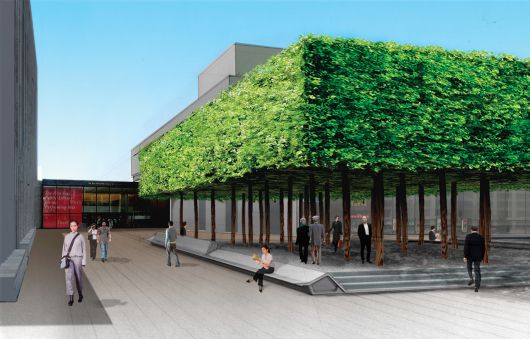 Lincoln Center’s press office couldn’t say how long it will be until the trees will be ready for this next phase. I’m guessing they won’t fill out until next spring at the earliest, by which time this natural roof may be outshone by its an even wilder one sprouting nearby—a new hanging green roof to be built over a glass restaurant on the north part of the campus. 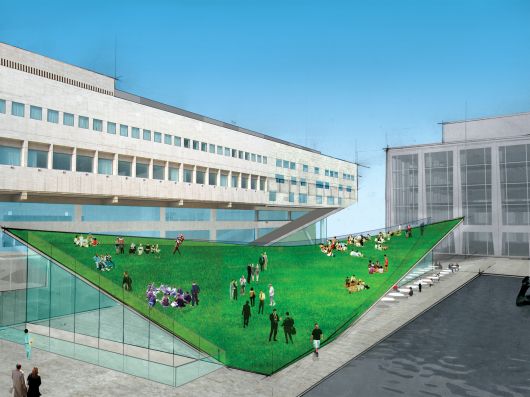