A Walk in the Park(s)

Exploring design and development in the Motor City (minus the motor).

A view of Detroit from the Windsor, Ontario riverfront. Photo by Kristin Palm.

Five years ago, Metropolis sent me back to Detroit, my former hometown, to see where the city was headed amidst a wealth of new development. I had only been gone for a year at that time, yet I was surprised by all the projects underway—a new stadium complex, an inviting software company headquarters, the restoration of two historic downtown hotels. More importantly, though, I was impressed by the uncharacteristically coordinated approach city officials, planners, and developers appeared to be taking, even as several projects were fast-tracked so they might be completed before the 2006 Super Bowl.

“Is long-suffering Detroit on the rebound for real?” the tagline to my article read. I wasn’t ready to answer a resounding “yes,” but I did offer a less-committal “quite possibly.” A recent visit back indicates that my caution was well placed, but so was my optimism. There is a tremendous amount of thoughtful development still continuing apace in Detroit, despite the faltering economy. And in true Motor City style, there is no shortage of planning and design conundrums either.

The first place I headed was the Detroit RiverWalk. This amenity, only in its first phase at this point, did not exist during the entire decade I lived in Detroit, and every time I walked or biked the riverside paths across the way in Windsor, Ontario, I would curse the parking garages and cement silos lining the water on the American side. Today, the silos (though not the garages) have been removed, and Detroiters in all their amazing diversity can be seen enjoying the waterway for which their city was named. As welcome as this project is, its design so far feels somewhat sterile. Where Windsor’s dirt and paved paths wind and diverge amid wildflowers and tall grass, the all-brick RiverWalk is completely linear, making it feel a bit like a back patio for the many buildings it abuts. Of course, the RiverWalk must be integrated with existing development, a challenge not present in Windsor, where the city long ago purchased three contiguous miles of rail yards and other riverfront property and converted it to green space. Perhaps as the RiverWalk extends past downtown—west to the Ambassador Bridge and east to Belle Isle Park—there will finally be opportunities to look to the city’s progressive neighbor for ideas. 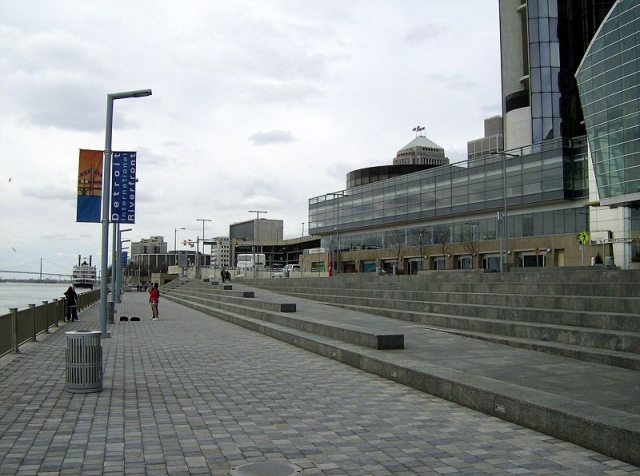 One additional problem with the RiverWalk must be remedied immediately, however: the ’80s rock that blares incessantly from speakers in the much-touted new General Motors Plaza behind the Renaissance Center. I can’t think of anytime that hearing “Harden My Heart” or “Eminence Front” might enhance my enjoyment of an international waterway, but I know 6 a.m. on a Sunday is certainly not it. But that is when I sat on the Windsor side of the river watching a brilliant sunrise as fishermen cast their lines from small motorboats and seagulls plucked mud puppies from the water. A thoroughly peaceful experience, save for the tinny strains of “In the Air Tonight” wafting upstream and across the currents. Someone needs to rip those speakers from their moorings, and soon.

A few blocks off the river lies a more tranquil outdoor space. Despite being situated in the center of busy Woodward Avenue, Campus Martius Park is a small urban oasis. Featuring an array of gardens, patio seating, an ice rink and, less majestically, an Au Bon Pain, this new gathering place seems to draw foot traffic no matter the season. And for a city as auto-centric as Detroit, this is no small feat. Less inspired are the miles of stadium parking to the north of the park. From downtown to the Cultural Center, nearly every vacant parcel along Woodward has been put into service. Abandoned property is no treat to look at either, but if the city really is trying to become more pedestrian friendly, allowing its main thoroughfare to be converted into a giant parking lot every game day seems somewhat antithetical to that effort. 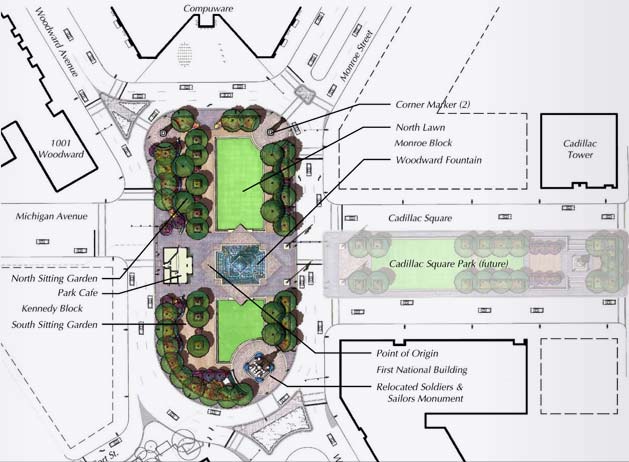 Two of the most exciting developments I saw in Detroit also embrace the city’s grit, but in much more intriguing ways. The Dequindre Cut is a one-mile remnant of a commuter rail line that ran from the suburbs into downtown until the early 1980s. With its network of concrete-anchored overpasses, the sunken, overgrown path became a mecca for graffiti artists and urban spelunkers. This August, the Cut will open to the public as an official link between the riverfront and the city’s beloved Eastern Market. While the path will be paved, a large swath of natural grass will run alongside it for the length of the trail. The best part, though, is that the city has elected to celebrate, rather than sandblast, the Cut’s most interesting feature: The graffiti will remain. 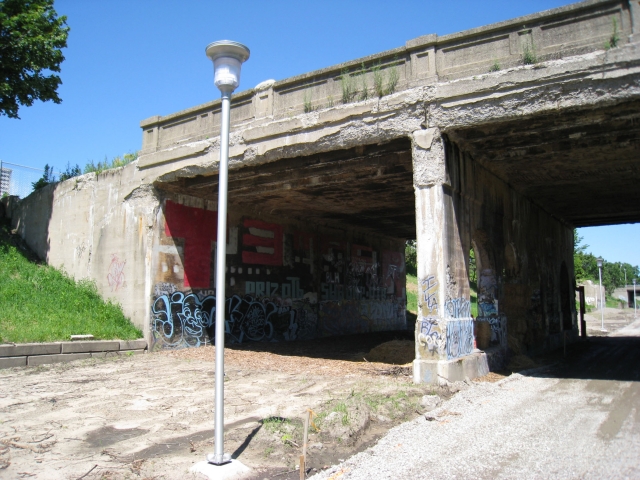 Graffiti along The Dequindre Cut. Photo by Ken Taylor.

Up the road is the Museum of Contemporary Art Detroit (MOCAD). Located in an old automobile dealership, MOCAD sports a few requisite art gallery trappings—funky doors, sans serif signage, an organic cafe—but architect Andrew Zago eschewed any major renovations of the cavernous space. (It is reported that this was due to budgetary, as well as aesthetic, concerns). The New York Times’ Nicolai Ouroussoff praised Zago’s “intentionally raw aesthetic”—the exposed pipes, the open floor plan, the scuffed original flooring, the flaking white paint. I agree with Ouroussoff, but what I love most about MOCAD is Zago’s unselfconscious approach. MOCAD feels like many other places I love in Detroit—buildings bought on the cheap by friends and converted into studios or galleries or performance spaces. Zago didn’t keep MOCAD’s space “raw” because that was the hip thing to do. He did it because it’s the Detroit thing to do. And that’s way cool.

The MOCAD building includes a mural by artist Barry McGee and a neon piece by Martin Creed. Photo by Corine Smith, from the MOCAD Web site.