A few days ago, I wrote from Denver to recap the first day of the FORUM, the annual conference of the American Institute of Architecture Students. The AIAS collectively serves as the voice of students to the profession of architecture and design in North America and beyond. Continuing on for an additional three days, students […]

A few days ago, I wrote from Denver to recap the first day of the FORUM, the annual conference of the American Institute of Architecture Students. The AIAS collectively serves as the voice of students to the profession of architecture and design in North America and beyond. Continuing on for an additional three days, students from around the world came together to not only celebrate architecture but to consider the role of energy and sustainable practices in the built environment.

The event, hosted by University of Colorado Denver and Boulder was two years in the making. Denver’s election to host the 2008 convention in Boston in 2006, just one week after Denver’s airport 45-hour blizzard-borne shutdown, began a long process of planning for 650 students from across North America and the world. The message of sustainability was not lost in consideration of so many students traveling to get to the Mile High City as both the AIAS and the Hyatt Regency worked hard to promote sustainable practices and moved toward a carbon-neutral meeting.

In addition to the urban laboratory presented by the city, speakers from around the world considered the theme of the conference. Paul Polak, the keynote was presented in the recap of the first day. On the second night Alfred von Bachmayr, founder of the World Hands Project, presented his practice, which evolved from a sustainable architectural practice to one that builds low-income straw bale homes along the US-Mexican border. 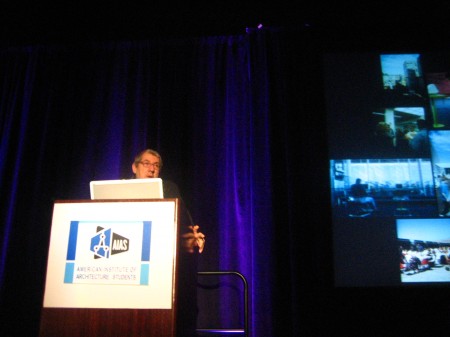 Will Bruder, whose presentation more lyrical than most and often spoke of “people and place” and “poetry and pragmatism” created great excitement. It seemed like looking into a family scrap book, and rather than object, attendees intently listened to his recollections of thoughts, emotions, and ideas. For Bruder, his role as an educator emerged as he told the audience, “At no point in the AIA contract is there a blank for how much creativity you’re going to give. No one asks for just 48% of your creativity.”

In sharp contrast to Bruder’s talk was Mexico City’s Michel Rojkind—the rock n’ roll to Bruder’s jazz (the analogy helped by the fact that Rojkind was in a rock band for 12 years and produced 4 albums). Where Bruder spoke of the conventions theme of “energy” as a function of our place on the planet, Rojkind represented the energy of the next generation of architects and designers. Rojkind’s generation is one that is experimenting with the limits of digital designed, built work, and one where the computer has always been at hand in the production of architecture. 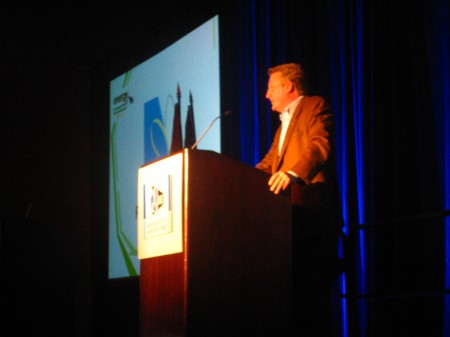 By coincidence, the AIAS would return to the city where its service program Freedom by Design was started on its fifth anniversary. Freedom by Design utilizes the talents of architecture students to resolve accessibility issues for elderly and impoverished members of their community through modest design and construction solutions. Founder Brad Buchanan, FAIA, described the program as one that sought “radical impact in people’s lives with modest changes.” When asked why Buchanan started the program, he said that it started as a way to excite the staff at his firm. “People thrive when there is an opportunity to change people’s lives.” AIAS has since adopted the program as its custodian and has 47 participating chapters across the United States, something Buchanan “never believed would happened in a million years, and yet it has.” 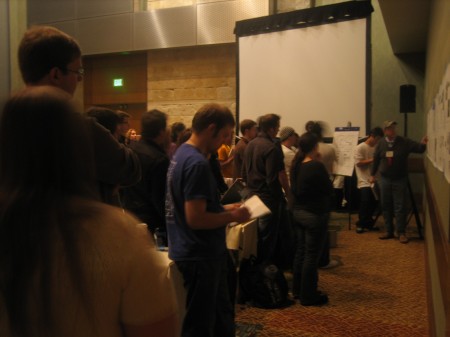 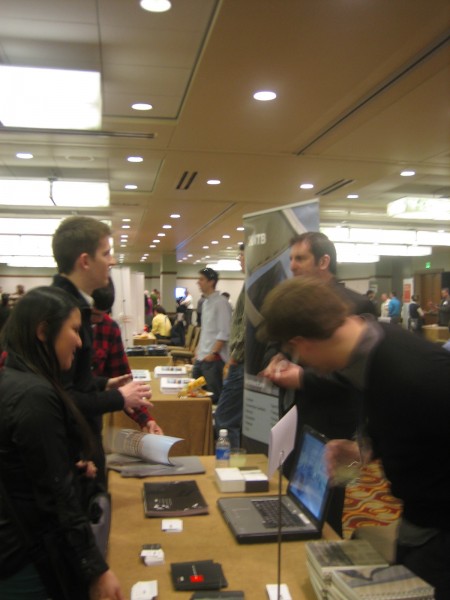 At the College + Career Expo

With the uncertainty of the economy, a large number of students sought to hone employable skills-from hand rendering to portfolio design and architectural photography. In addition, several software companies provided workshops to not only demonstrate their wares, but also for students to gain additional skills to set them and their resumes apart. The same sentiment could be felt at the annual College and Career Expo that connects students, architectural firms, graduate schools, and product manufacturers together.

There were a larger number of people who attended these workshops compared to years past (forgoing valuable individual sightseeing time, to sit in front of an all-too-familiar monitor). One attendee from California put it best, “Anything I can add to my resume may be the one thing that gets me hired right now.”

Others sought to head outside of the hotel, braving the unseasonably mild weather to explore the offerings of Denver on tours from a planned ski trip or exploring the National Renewable Energy Laboratory and even a rare chance to stand on the dome of the Colorado state capitol. 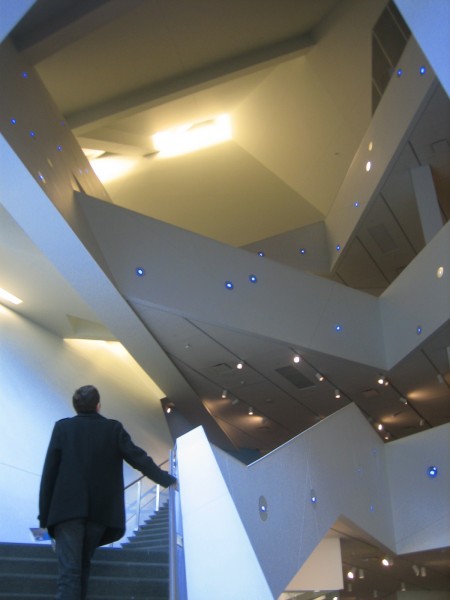 The Denver Art Museum was perhaps the most photographed building, and most visited attraction, as conference-goers sought to experience Daniel Libeskind’s vertigo-inducing exuberance for themselves. While not advised for those experiencing a post-New Years hangover, no state of mind could refrain Libeskind-bashing and questioning if the building detracted from the art (to be fair, most lobbed similar statements about the neighboring fortress-like Gio Ponti wing). 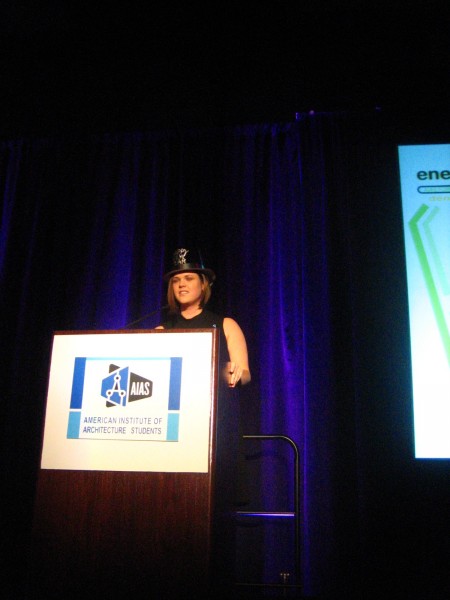 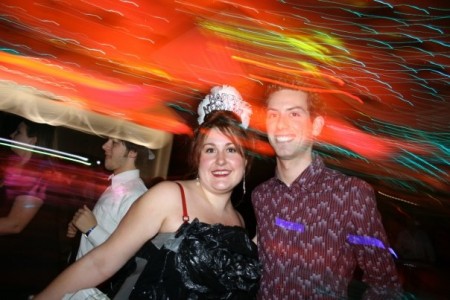 The challenge, but fun, of having a conference over New Years is that the moment must be celebrated properly away from many other friends and family. Per FORUM and architectural tradition, a costumed Beaux Arts ball is held on the eve of the New Year. While many wore conventional suits and ties, the theme of “The Recycled Ball”, asked daring partiers to make recycled costumes. Some recycled costume ideas from years past to others who scavenged thrift stores and hotel recycling bins while the 40-odd attendees University of Minnesota coordinated ahead to bring their favorite holiday sweaters (sadly, I could not get a photograph of the Minnesotan Christmas couture). While the Donald R. Seawell Grand Ballroom was a wonderful backdrop, Denver itself provided the best scenery as the fireworks above the 16th Street Pedestrian Mall lit up the sky and the ballroom in a majestic start to 2009. 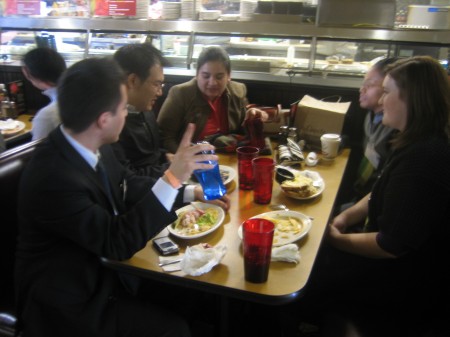 Lunch with the presidential candidates

Among the other events, the AIAS holds its elections for its board members and the location of the FORUM two years later. I had the opportunity to have lunch with the candidates for president about their thoughts about the event. For Anna McCorvey, the best part was the “Oh, I remember you” moments. “Being on the east coast, so far from some schools, this is the only chance you get to meet people from the west coast, or to see them again.”

“There’s a reason why we’re here talking about energy,” said Erike deVeyra. “Some things we’re not going to solve alone, and it’s only when we get together is there that spark, that catalyst for change. I think that’s why a lot of us keep coming back.” 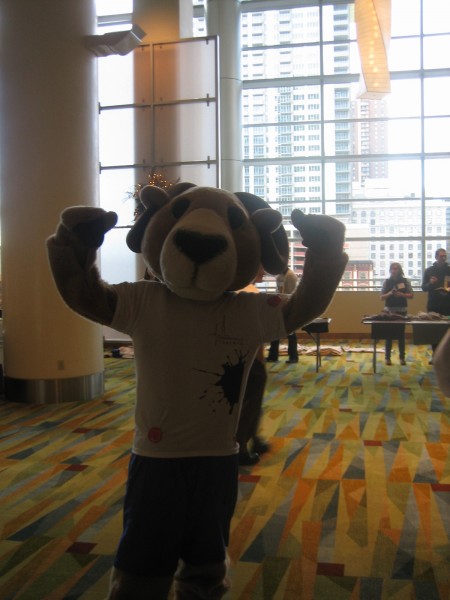 Ryerson University’s mascot even made an appearance at the conference

FORUM, as mentioned previously, is an annual ritual for many students, coming for three, four, or even five New Years in a row. It seems appropriate that the next FORUM, in Minneapolis within view of the new I-35W Mississippi River bridge has a theme of Connections.

As Je’Nen Chastain said at our lunch, “FORUM, is about connecting, collaborating, and working together—let alone the lifelong friendships.”