America to World: Brand This!

How does a logo fare on the Olympic runway?

Official outfitter of the 2008 U.S. Olympic team, Ralph Lauren dropped a navy blazer bomb on last Friday’s opening ceremonies in Beijing. While the design choice was meant to reflect, in the words of U.S. Olympic Committee’s chief operating officer Norm Bellingham, “a timeless and quintessentially American look,” more than a few voices have piped up to criticize the blatant branding of the oversized PoloTM logo. One particularly creative skewering came from Jeff Koopersmith, a political consultant and policy analyst at the American Politics Journal. Koopersmith methodically eviscerates the poor design choice and, as only a master chef bent on destruction can, rapidly fillets, dices, and then torches every self-advertising, consumeristic, and, yes, “tastless Neocon” value for which he believes the hefty logo stands. Take for instance this clever nominal switch in which Koopersmith gleefully mocks (and plays) the revisionist historian:

Norm Bellingham, the U.S. Olympic Committee’s chief operating officer, said, “Ralph Lauren was a ‘perfect fit’ for us, as, not only do they present a timeless and quintessentially American look, but they also have a great understanding of the importance of this moment …

I might paraphrase Bellingham this way: “Ralph Lauren is perfect for us. Not only do they represent a timeless and quintessentially colonial British look… 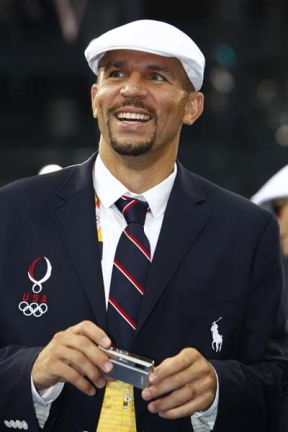 Well played, Koopersmithsonian! We wonder what he’ll do when he spies the meteor-sized logo on former President Bush’s navy blazer.

Unfortunately for Koopersmith, word is that Lauren’s design is a hot seller. Indeed, after waiting for the inspirational movie on the company’s website to finish telling me “it kind of comes down to how bad I want it, how badly I’m willing to keep fighting”-while panning conspicuously over U.S. Archer Joy Fahrenkrog’s generously logo-ed breast-I was told that the Men’s Opening Ceremony blazer has already sold out. Later, from a series of “Budweiser videos” posted on Ms. Fahrenkrog’s website, in which she skillfully spears the cans from various impressive distances, I found it difficult to orient myself in this tricky logo-ed configuration. Is the athlete promoting Budweiser, is Budweiser supporting the Olympics, or do the Olympics endorse Budweiser?

But time to wrap up the logo fiasco. I smelled a marketing ploy up this polo sleeve, so I called Ralph Lauren’s flagship store on New York’s Madison Avenue. A senior sales associate there told me that, while nearly all of the men’s items sold out in less than 24 hours, (Dickensian newsboy caps included), a few navy blazers remain to be snatched up. It seems there was another shipment.

And so marches on the world of branding and design, straight through the Beijing Olympics. It’s a messy, noisy love triangle indeed: while 15 percent of the world’s population cheers on their nations’ athletes, consumer branding strikes dissonant chords, and retail sales continue their decrescendo. But thanks to an oversized logo, just this once on an unrivalled global stage, one retail company’s cashiers can still ring loudly.