Another Modernist Battle in New Orleans

Preservation groups are sending out an S.O.S. (Save Our Schools)

The plight of public schools in New Orleans have been a hot topic lately. This past Monday the School Facilities Master Plan for Orleans Parish was released; it calls for a large-scale rehabilitation of the city’s educational infrastructure. This news falls in the larger context of a shift toward privatized education which, depending on how you look at it, is either a welcome solution to an entrenched problem of low-performance (as portrayed in this week’s New York Times Magazine), or a sinister example of “disaster capitalism” (as per Naomi Klein). In either case, something important gets lost in the conversation; that is the impending threat to New Orleans’s modernist architecture.

The Phillis Wheatley Elementary School was built in 1955 by architect Charles R. Colbert. The building is raised in such a way that helped it survive Hurricane Katrina. The original intent of elevating the structure was to create a sheltered play area underneath as well as to allow air flow that helped keep the interior cool.
(Photo by Frank Lotz Miller-courtesy The Estate of Charles Colbert, architect)

It’s becoming a common story: In an era before air conditioning regional modernists built airy, light-filled schools suited to their geographic environments. Then came years of band aid renovations that diluted those principles beyond recognition, leaving uncomfortable, poorly performing buildings that school boards prefer to knock down. In New Orleans the enormous building boom of the 1950’s and ‘60s created many such schools in the spirit of passive comfort, which as of Monday are pretty much all lined up to be knocked down.

There are greater and lesser degrees to the significance of each of these buildings, but the plan for their wholesale destruction is troubling. “Essentially all 30 schools built in the 1950s are slated for demolition,” says Francine Stock, who is the Visual Resource Curator at the Tulane School of Architecture where she also teaches architectural history. “It’s totally overwhelming,” she laments. Stock has been working with students to document New Orleans’s heritage of regional modernism before it’s gone (Check out their Flickr page). 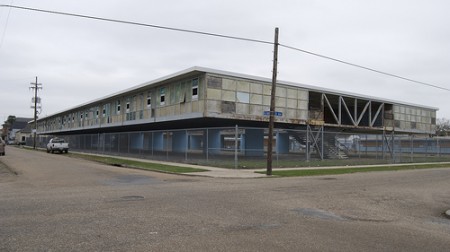 Today, the Phillis Wheatley Elementary School is on the list to be torn down. Clearly it is not as it was in its prime-the original glass was replaced by cheap, opaque plexi-glass panels and it could use some fresh paint-but structurally it is sound.
(Photo by Francine Stock)

It’s not quite the end of the rope for these schools yet. There is now a 60 day response period to the master plan and groups including Docomomo, the Tulane School of Architecture, and the AIA are working to raise awareness. In June, mid-century modern public schools as a group were included on the Louisiana Landmarks Society’s 2008 list of the city’s nine most endangered sites.

The New Orleans’s public school system is notoriously bad and deserves improvement. But is it necessary for the city’s architectural heritage to take such a beating in the process? “It’s always more challenging to retrofit,” says Stock, “but in a case where you have a significant and innovative structure there’s great value there.” Add to the mix environmental considerations, such as the master plan’s recommendation that new schools aim for LEED Silver certification or the ever growing detritus of the old New Orleans piling up in the city’s landfills, and preserving the embodied energy and materials of these schools takes on yet another level of significance. This is a unique time to start fresh with the New Orleans school system, but the city’s architectural history should not have to be erased wholesale to achieve new goals.