London’s ugliest icon will be gilded if the English squad takes home the tournament trophy.

While the world watches the 2014 Fifa World Cup tournament with baited breath, one country in particular has a lot of incentive to make it to the top. Beyond the title and trophy, Team England will be motivated by another gold totem. The owners of the ArcelorMittal Orbit tower have tentative plans to give the structure a new, blingy coat of paint in the event that the Three Lions emerges triumphant.

The 377-foot-tall tower, a sculpture piece and observation tower by Anish Kapoor, sits just outside Olympic Stadium in Stratford and offers panoramic views of the London area. Renderings show the tower changed from the current red (meant to signify luck) to a gleaming gold, a flashy and somewhat bizarre tribute to a hoped-for English victory. The tower itself was panned by critics (with descriptions ranging from “overgrown maypole” to a “contorted mass of entrails”) and isn’t exactly a symbol of national pride. 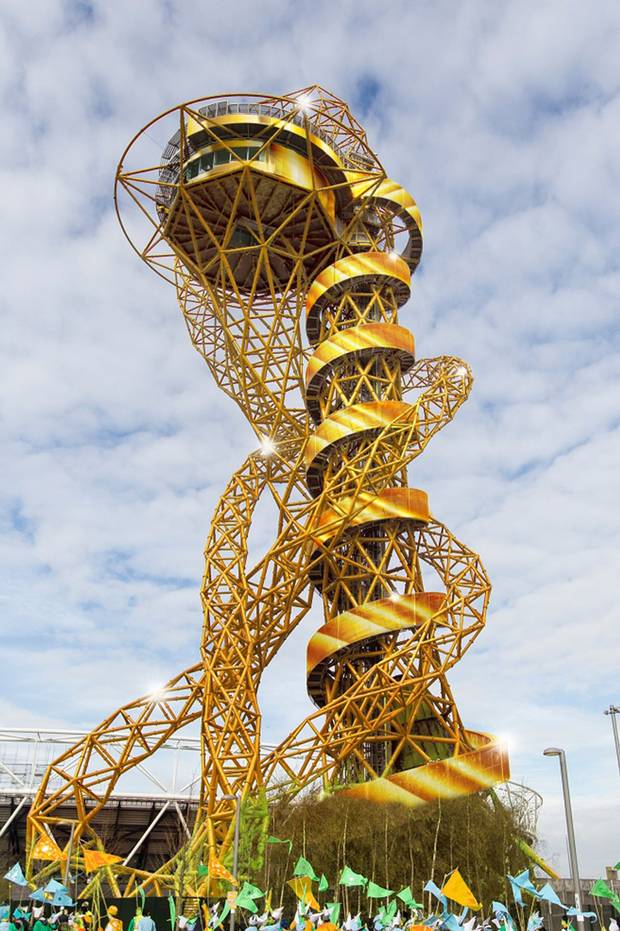 A rendering of the ArcelorMittal Orbit painted gold, in the unlikely event that England wins the 2014 World Cup.

This may not matter. The renderings, released last week by Orbit’s PR firm, don’t seem to be an indicator of actual plans as much as someone’s felicitous foray into Photoshop. Orbit officials have remained cagey about the planned alterations and England isn’t exactly favored to win, leading many to think this is more of a marketing stunt.

After all, it isn’t the first time England has pulled out the paint to thank its athletes. As the Independent notes, top medalists from Team Great Britain had their mailboxes painted gold following their victories in the 2012 Olympics.

But while people back home don’t seem too convinced, the lure of a reward like this might be just the push the English players need after their lackluster start in Brazil.