Prior to moving to New York nine months ago, I knew and cared very little about architecture. Or at least I thought it would never be a subject that would interest me. But it was hard to stay ignorant to the built environment in this densely structured city, when it holds such a variety of […]

Prior to moving to New York nine months ago, I knew and cared very little about architecture. Or at least I thought it would never be a subject that would interest me. But it was hard to stay ignorant to the built environment in this densely structured city, when it holds such a variety of architectural expressions. From neoclassical to Art Deco to high modern aesthetic, the distinguishing styles of the surrounding buildings define each distinct neighborhood in Manhattan, teaching its inhabitants to be aware of architecture.

Last Friday, I joined a group of 200 architecture-enthusiasts on the first day of their Archiprix International study program. Developed and sponsored by Hunter Douglas since 2001, the biennial architectural tour takes a large group of architects, manufacturers, landscape and urban designers to architectural landmarks in vibrant global destinations. The successful program has traveled to Rotterdam, Istanbul, Glasgow, Shanghai, and Montevideo in the past, and this year Archiprix brings its tour across the Atlantic to examine American architectural history and recent developments. 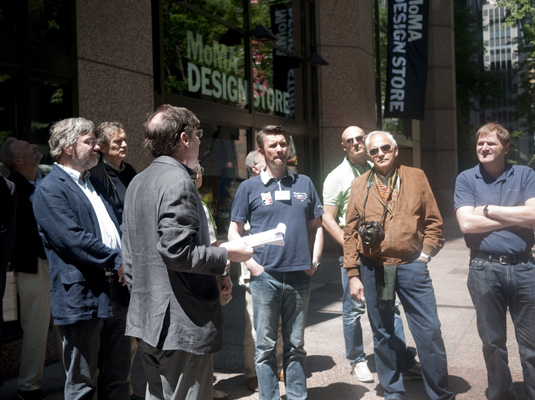 The 2011 program kicked off on June 3rd, with a keynote presentation by New York’s chief urban designer, Alex Washburn, in the brightly-lit auditorium of the New York Times Building designed by Renzo Piano. Washburn covered a brief history of Manhattan, and shared the influential ideas of Frederick Law Olmsted, Jane Jacobs, and Robert Moses, all who shaped the city’s approach to planning. He explained the city’s efforts to prepare, with design solutions, for climate change. Washburn’s presentation was an informative introduction to the day’s activities, providing a foreign audience with the background and context for New York’s urban planning. We, members of the audience, discussed our fascination with the co-inhabitation of the High Line’s greenway alongside flashy new buildings by noted architects in the grungy Meatpacking district of former slaughterhouses.

After dividing into smaller collectives–my group included visitors from Austria, Switzerland, Germany, and the Netherlands—with representatives from Europe, Russia, and the Middle East. Guided by two knowledgeable New Yorkers, we navigated through the city on a small coach, observing the contrast between our back-to-back visits with a relaxing lunch in Little Italy in between. 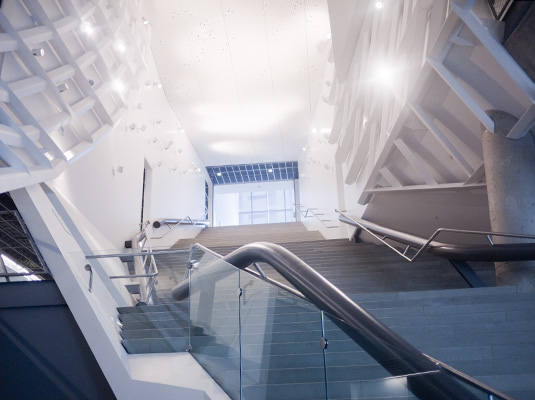 In the Cooper Union Building.

While I’ve been to all the locations on this New York itinerary (and have even heard the same Washburn presentation before), Archiprix’s tour provided a sharp focus on the city’s most notable structures, all in one day. The tour is the difference between seeing a single design object in a magazine or retail store, and experiencing it through a curated exhibition. The intensive schedule included the Museum of Modern Art, with reference to the newly acquired American Folk Art Museum and neighboring CBS Building by Eero Saarinen; Thom Mayne’s eccentric Cooper Union Academic Center, and SANAA’s New Museum among the eclectic neighborhood of the Lower East Side; a presentation of the World Trade Center Redevelopment site from the top of 7 World Trade Center, adorned with Jeff Koons’s Balloon Flower in the fountain area and a podium wall on springs, designed to bounce back car bomb threats while disguised as a Jenny Holzer installation; the Urban Garden Room by Margie Ruddick in the lobby of Manhattan’s second tallest building, One Bryant Park; Norman Foster’s diagrid Hearst Tower; the controversial Museum of Art and Design at 2 Columbus Circle; and a drive up Park Avenue to pay homage to Mies Van der Rohe’s bronze-hued Seagram Building and the iconic Modernist Lever House by Gordon Bunshaft. Despite jetlag, my fellow group members were still keen and inquisitive, eager to experience each architectural stop with the aid of a strong espresso. 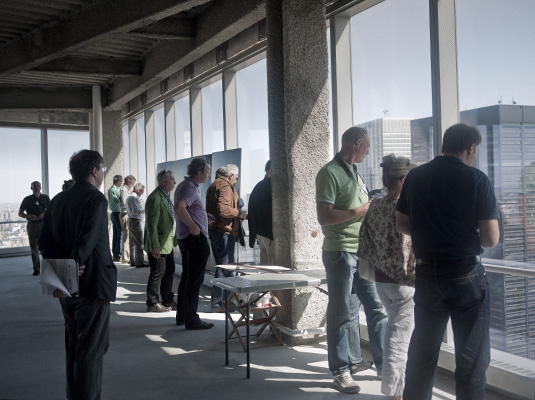 The Archiprix tour is a well-organized and timely affair, coinciding with Phase II in the High Line’s opening of its most recent expansion this week, and a space housing large-scale models of the eight major on-site projects, on the 10th floor of the David Childs-designed World Trade Center building. Overlooking the World Trade Center redevelopment with a panoramic and aerial view from 7 World Trade Center was the breath-taking highlight of the day. While many of the other site visits on the agenda are easily accessible to pedestrians, this special presentation was a rare opportunity for visitors and locals alike. The open space on the 48th floor is still unfurnished, but has acted as a working studio for the last few years to four artists in residence. The creators retain ownership of their artwork; and the workspace is offered for free, simply providing a chance for artists to reflect on and document the development of the historical World Trade Center site below. 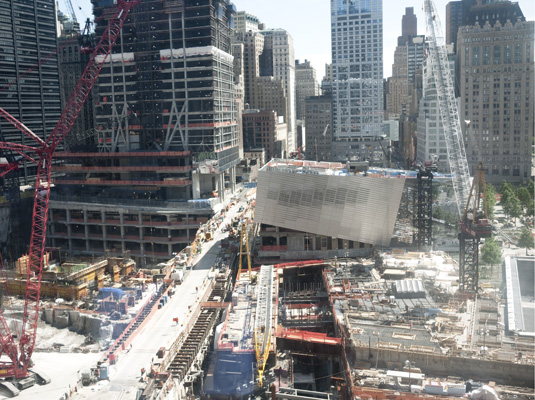 Archiprix participants were presented with a private tour, introducing the collection of skyscraper proposals by Santiago Calatrava, David Childs, Norman Foster, Frank Gehry, Fumihiko Maki, and Richard Rogers, while peering over Reflecting Absence, the waterfall-lined memorial in construction. Designed by Michael Arad and Peter Walker, the memorials mark the footprints of the lost buildings, and are due to be completed by the tenth anniversary of September 11th this year. Even as the room was filled with foreigners unable to recall the direct impact of the tragedy (myself included), there was a stillness and quiet understanding of this development’s significance as we examined the models and construction site designed to rebuild lower Manhattan. 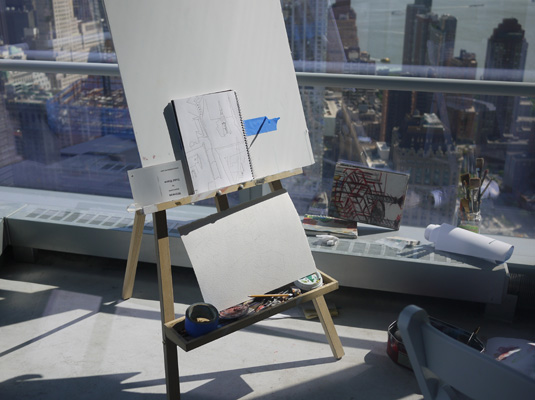 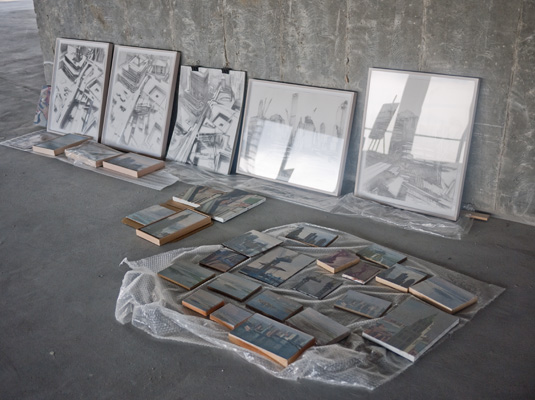 Over the next week, the program will continue in New Haven, Boston, and Chicago, before returning to New York for the conclusion of the tour with the Archiprix International Hunter Douglas Awards ceremony held at the Guggenheim on June 9th. Groups will visit works such as Steven Holl’s dormitory for MIT, the Gropius House, Boston City Hall, and Carpenter Center at Harvard, before proceeding to Chicago to see Frank Lloyd Wright’s Oak Park home and studio, the McCormick Tribune Campus Center by Rem Koolhaas, Mies van der Rohe’s 1941 IIT campus, and Renzo Piano’s Modern Wing and Millennium Park at the Art Institute of Chicago. Yes, the tour favors the work of historical figures and world-renowned starchitects only, but given the short duration of a six-day overseas tour, Archiprix does a fine job of refining a selection of American landmarks worth seeing. 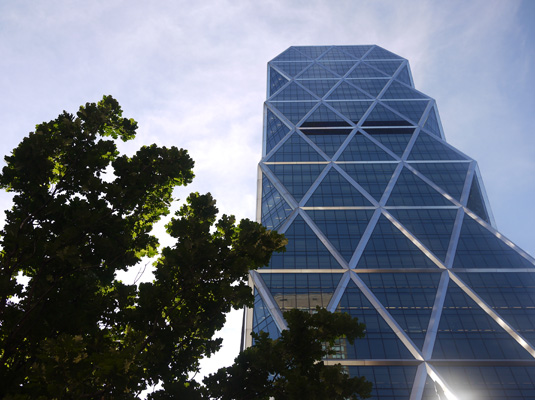 At the Hearst Tower.

After a full day with Archiprix, I found myself more informed about the architecture in the city where I live now. This is the tour I wish I took when I first arrived in New York; if I had, I would have learned to appreciate my surroundings much sooner. Though less elaborate and not as vast as the AIA Guide, Archipix provided a way to become acquainted with a city through an architectural lens, and the tour was a chance for dialogue and interaction between like-minded professionals from around the world.