Behavior, Bicycles, and the Best Intentions

I was riding my bike home from the office on a Sunday. The downtown San Francisco traffic was eerily quiet. I picked up speed on a slight downhill section of my standard route from the Financial District to the Marina, when I was suddenly pitched off my bike and into the street. I had a […]

I was riding my bike home from the office on a Sunday. The downtown San Francisco traffic was eerily quiet. I picked up speed on a slight downhill section of my standard route from the Financial District to the Marina, when I was suddenly pitched off my bike and into the street.

I had a few scrapes and bruises, but nothing serious.  The panicked driver, who had opened his door into me as I rode by, apologized and implored if I was okay, but I couldn’t focus on anything he said because I was laughing so hard.

It is strangely hilarious that I had just completed more than 1,000 miles on an unassisted bike ride from Beijing to Shanghai without a single scrape, but couldn’t last more than 48 hours back on US soil before getting into some kind of accident.

The goal of my trek was to gain a firsthand, in-depth understanding of the bicycle’s role in Chinese life, and to investigate how the cycling culture and bike infrastructure can be integrated into efficient and sustainable transportation design.

Before I left for my three-week journey, I spent hours on the Internet looking at gridlocked traffic in Beijing and Shanghai with cars and bikes pointing in every direction. My family, colleagues, and friends were convinced a car would hit me. I couldn’t help but take on some of their anxiety.

On the third day of my trek, I expressed these concerns to Xiaodi Zheng, a landscape architecture teacher at Beijing’s Tsinghua University, after giving a presentation about the role of the bicycle in China to her students. We talked about the apparent chaos I observed riding through the streets of Beijing. Why did no one wear a helmet?  Were people that reckless with their lives?  Didn’t they realize the potential for serious injury in such a mad environment?

This video was taken near a Beijing train and bus hub. Bikes, pedestrian, and cars travel in close proximity and often weave together.  I had to let go of any pre-planned paths and just flow with the movement around me, embracing the chaos, in order to safely come out the other side.

According to Ms. Zheng, bike accidents in Beijing are lower than one would expect for such a dense urban area. As soon as I got out of Beijing, I realized that China is made for bicycles. For nearly two centuries, bikes have been China’s primary mode of transportation. People grew up in this environment and intuitively know how and when to go through traffic. It’s the foreigners trying to analyze it who get into serious collisions.

I was given an invaluable piece of advice by a graduate student living and studying in Beijing, “Embrace the chaos.”  This became my mantra as I entered difficult traffic patterns. I cautiously surrendered to my environment and simply went with the flow. I stopped worrying, kept moving, visualized my path for the next 20 feet in front of me, and adapted when necessary. This was the only way I survived. 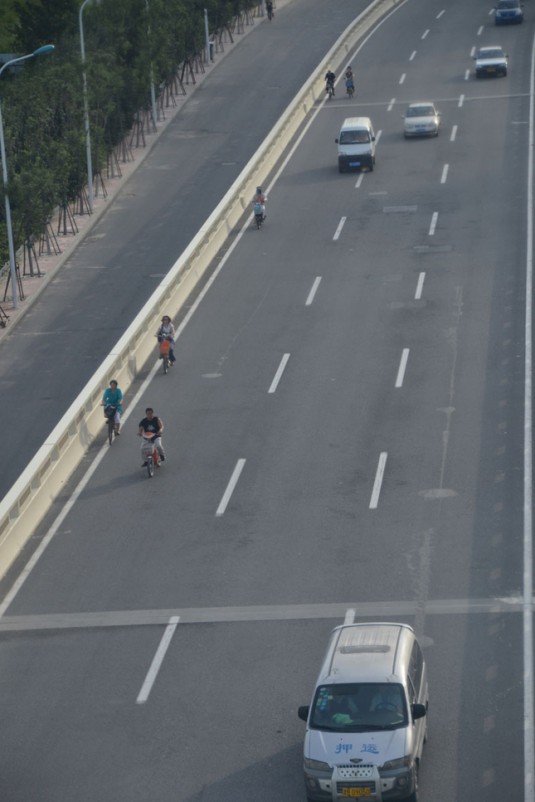 Bikes and cars share a highway going into the urban center of Tianjen.  There are no bike lanes separating cyclists from the cars travelling at more then 60 mph past them.

Bikes in the American urban environment are relatively new. New movements promoting dense pedestrian and transit-oriented communities have contributed to the commuter bike’s growing popularity in the United States.  New York City has doubled its bike lanes to 400 miles in the last five years. Ninety-five percent of Boulder, Colorado, is “bike-friendly.” Chicago has 12,000 public bike racks. Bicycle commuters in Portland, Oregon, are offered free coffee and donuts in the morning. And Phoenix, Arizona, has a policy that requires bike stripes to be included on any new street construction or resurface projects. But it takes more than infrastructure to establish a bike culture.

The California drivers licensing test states that bikes have the same rights to the road as cars and that bike lanes should be treated the same as any other traffic lane. However, behavioral and traffic rules specific to bikes are not mentioned beyond these vague statements. 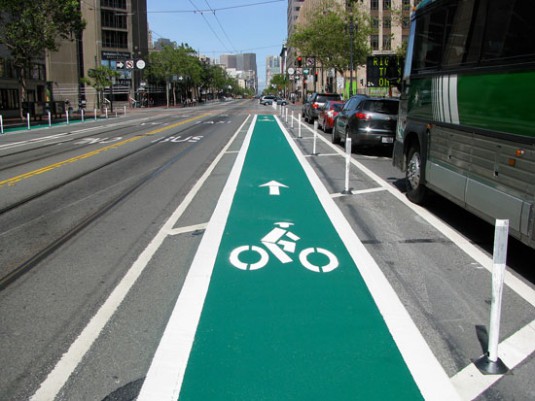 In San Francisco bike lanes are painted green to give more of an obvious visual indication of the bikes’ right to the road.

This is a stark contrast to the behavior and habits taught in older bike cultures in Europe that have integrated cycling infrastructure into its urban design from the very beginning. Danes are taught, from a very young age, to exit a vehicle by opening the door with the hand farthest from it. This requires one to look over their shoulder, making it possible to see oncoming bicycles, and reducing the chance of ‘dooring’ someone as they ride by. By the time one is of driving age, this is already an ingrained habit keeping both car and cyclist safe. 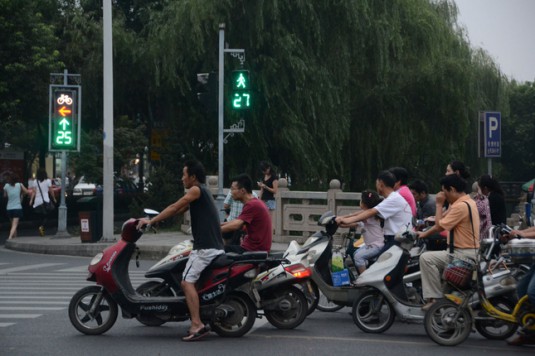 Bicycling in China isn’t all chaos. Cities like Suzhou have integrated bike-specific traffic lights into its infrastructure to help cars and bikes coexist safely.

As designers, we like to think we have the ability to influence behavior by modifying the environment, but at some level societal conditions are even more essential. Conditioned behavior can actually override the intention of the design form. They don’t need bike lanes in China, because cyclists have always had a place on the road. While our gains in infrastructure are important for a safe coexistence between bikes and cars, new habits and ways of thinking, for both the cyclist and the driver, are just as important in maintaining a safe and healthy biking population.