Buckminster Fuller with the Fly’s Eye dome and the Dymaxion Car in Snowmass Colorado, 1980. Technologically complex yet sculpturally elegant, Buckminster Fuller’s Fly’s Eye dome was an iconic, mid-20th-century solution for mass-produced, low-cost housing. As the last dome scheme Fuller proposed in his lifetime, the prototype, fabricated in 1967, has been traveling around the nation […]

Buckminster Fuller with the Fly’s Eye dome and the Dymaxion Car in Snowmass Colorado, 1980.

Technologically complex yet sculpturally elegant, Buckminster Fuller’s Fly’s Eye dome was an iconic, mid-20th-century solution for mass-produced, low-cost housing. As the last dome scheme Fuller proposed in his lifetime, the prototype, fabricated in 1967, has been traveling around the nation for more than four decades. Over that time the fiberglass construction has suffered wear and tear. This Wednesday, May 25, will mark the unveiling of a historic restoration of the original 24-foot dome, completed by a high tech composite building company, Goetz Composites.

The dome house, which looks very much like an over-sized soccer ball, was designed to be an open house with 7 ft. circular holes, providing structure for doors, glass windows or solar collectors and wind-driven turbines. Constructed by hardware of the same shape, the inward curves in the dome’s exterior were intended to guide rainwater into its cistern system. Fuller envisioned a housing solution that would be highly efficient in energy and material usage but also capable of harvesting collected light and wind energy. 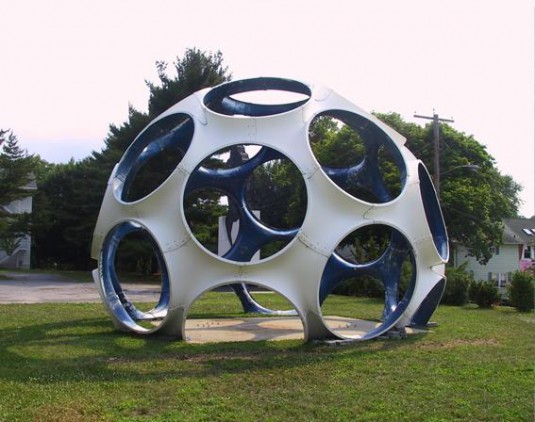 Also known as Monohex, the spherical building consists of 50 fiberglass pieces, hand-assembled and held together by 1,050 stainless steel bolts. While it weighs 3,500 lbs, Fuller’s bulbous design was patented in 1965 for its ability to reduce structural weight and therefore cost for materials. The renowned inventor’s work focused holistically on serving humanity in the most energy- and cost-efficient way he could imagine using technological experimentation, and the Fly’s Eye pre-fabricated design captures this ideology completely. Aside from the 24-foot prototype, Fuller created a 50-foot version of this geodesic design and supervised its construction throughout the process. 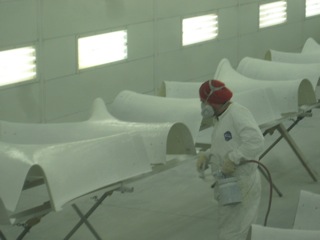 “Applying our expertise with composites in the world of architecture is exciting and the possibilities are enormous,” said Eric Goetz, an expert in carbon fiber technology since 1975, who lead the Goetz Composite team on this project. “We are just seeing the tip of the iceberg of composites in the architectural space.” To tackle this museum-class restoration that demanded meticulous attention, Goetz worked collaboratively with the Buckminster Fuller Institute, as well as Daniel J. Reiser and John Warren, both whom fabricated the original structure in California with Fuller himself. The 24-foot version of the dome is the only one in existence, and has been kept in Bristol, Rhode Island since the repair began. Goetz Composite will present the renewed Fuller masterpiece to the public at the company’s grounds this week in Bristol.

The new Fly’s Eye dome will provide an opportunity to revisit and rethink Fuller’s influential utopian ideas and complex philosophies. Elizabeth Thompson, executive director of the Buckminster Fuller Institute describes it as “a convergence of Fuller’s most advanced thinking with regard to synergetic geometry, advanced structural systems, and the very contemporary notion of a dwelling machine.” The completed artifact is due for installation at Art Basel Miami Beach and Design Miami in December 2011 and will be included in the contemporary art and design collection at DCRA, Miami.