On the edge of extinction. Architectural criticism can be a productive and a creative literary practice. Its best practitioners challenge architects to examine their work while, at the same time, help them evolve their profession. Architecture and architectural criticism can be bound together in a mutually constructive association, each contributing to the other in reactive […]

On the edge of extinction. Architectural criticism can be a productive and a creative literary practice. Its best practitioners challenge architects to examine their work while, at the same time, help them evolve their profession. Architecture and architectural criticism can be bound together in a mutually constructive association, each contributing to the other in reactive and proactive ways. Established as an ambassador of the built environment, the architectural critic began life as an exalted figure, revered by most practitioners and read by a relatively minor segment of society. With the advent of the more wide reaching design journals, architects breathlessly anticipated the next issue of their favorite magazine, looking forward to biting criticisms of other architects’ projects. Then came the Internet, and an even wider public had access to national newspapers, websites, and blogs. On a parallel but inverse evolutionary track, some would argue that the architecture community has become too specific, self-contained, and defined internally by specialty practices: architect, urban designer, interior architect, planner, community developer, design builder, academic, graphic designer.

This broad new world of content-hungry media and a constricted design profession co-exist at a time when complex social issues demand thoughtful design solutions, a time when architects have the opportunity to make substantive contributions to some of the world’s most pressing issues. Catastrophe is the new normal. An onslaught of recent disasters around world and a chronic economic downturn have begun to compel the design community to prioritize empathy, compassion, and perhaps, selflessness—but, unfortunately only a small portion of the profession have lent their talents to these pressing issues. These challenges are all the more apparent in post-industrial cities like Detroit, where years of rapid disinvestment and racial turmoil have led to conditions which require a much broader definition of architectural practice and a more comprehensive responsibility for the architectural critic. 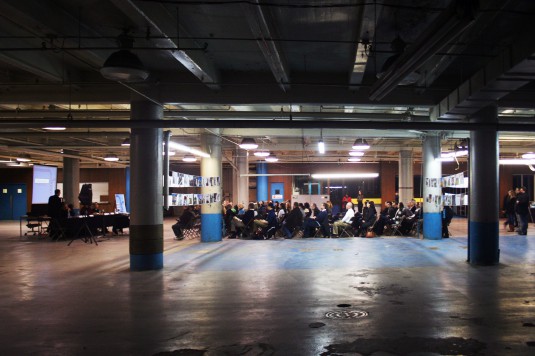 Confronted with these initial questions, each of the six panelists, Frank X. Arvan, president, AIA Detroit; Jennifer Conlin, contributor, New York Times; Sarah F. Cox, editor, Curbed Detroit; Michael Hodges, fine arts columnist, Detroit News; Karrie Jacobs, writer, architectural critic, and editor, Metropolis Magazine; and Reed Kroloff, director, Cranbrook Academy of Art and Art Museum presented their five minute interpretations and influences on current architectural criticism trends. The panel was deliberately diverse, composed of designers/educators/practitioners/entrepreneurs/critics, each of whom offered a unique approach and skill set to the creative landscape of the Detroit region. Their presentations ranged in scope, scale, brand, and opinion. But they were unanimous in their support of a new socially-conscious relationship between architect, critic, and public. As Reed Kroloff eloquently stated, critics need to explore the development of public space, focusing on aggregation and not isolation. As shown in his work with post-Katrina New Orleans, the need was (is) for real world design solutions, where architecture as we grew to understand it in the 20th century no longer matters.

Role of the (re)public. The panelists agreed that an alternative mode of practice is on the horizon.  Current moods are shifting towards a more aggressive “public”, one that passionately argues or fights for what it wants, for what it believes in. Instead of waiting for a catalytic trigger to better their environment, communities are demanding to be heard, and forcing the architects’ hands. 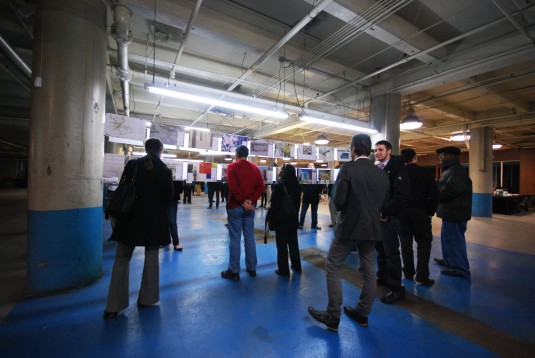 To give voice to the increasingly demanding public, Jennifer Conlin has proposed the “Critic Car”, a mobile design criticism vehicle that brings multiple voices media outlets to the public. Sarah F. Cox, editor of Curbed Detroit, funnels development, design, and real estate tips through her blog, creating a fast paced resource for design information. Most panelists emphasized that the role of the architectural critic has evolved from a previous passive stance on the analysis of the built environment to the more active role facilitating public discourse. This sentiment resulted in a poignant question by one astute audience member: “Who is your public? There are multiple publics here in Detroit, not just the white, artistic pioneer as marketed in many of your articles. How can the architectural and criticism communities make good on their commitment to all publics?”

Detroit’s (re)public. Part of the challenge facing the architectural critic, and the profession in general, is the language used to convey spatial and architectural ideas. In many ways the critic acts as an interpreter of the profession, framing the design rhetoric to a larger audience. However, often the goals and objectives of the architectural community are not aligned with the community at large. The priorities and interests that matter to the multiple definitions of ‘public’ described here aren’t the topics addressed in design discourse. This misalignment is exacerbated by the lack of a common language by which to discuss these issues. 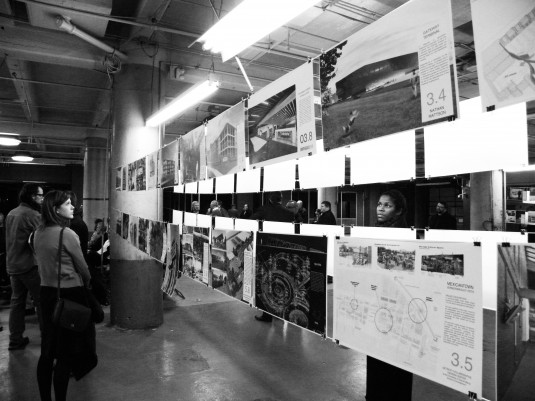 It falls on both the architectural community and critics to educate and engage the public through multiple and diverse avenues. It is not enough to continue to target a narrow socioeconomic segment involved in the process of architecture. Nor is it appropriate to target only those projects considered ‘capital A’ architecture. Communicating with the greater public about architecture means encouraging everyone to take a more vested and informed interest in the built environment in all its manifestations. From big box retail to urban infill, an informed public is an active public regardless of anyone’s personal aesthetics.

In Detroit, where issues of race and wealth distribution have historically plagued the planning and development sector, there is a need for broader involvement and more balanced participation in the city’s growth. Imagine a society where you can as easily discuss the latest architectural development in as precise terms as you do the latest music or sports or zombie television program. 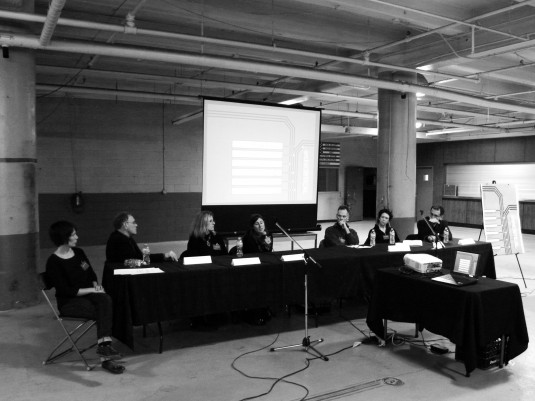 This is not to say that architectural critics should abandon the theoretical underpinnings that govern designers’ decisions; but it’s important to make such information accessible too. To make a comparison drawn by the panelists Michael Hodges noted that the medical profession is fraught with very specific and obtuse language that is difficult for average Americans to understand. However, a good doctor is able to communicate this to her patient when necessary. For architects to succeed, they need to develop a better bedside manner.

(R)evolution. While the presentations, the panel discussion, and audience-driven question and answer session generated insightful and poignant commentary on the status of architectural journalism, it became clear that there is a need for action in Detroit’s design culture. As one concerned audience member asked, “Is Detroit’s design community ready to meet the people in the streets through a more democratic process? If not, then all of this discourse is inconsequential.” If the event offered a benchmark for the current state of the profession it also exposed the extent to which Detroit’s design community must continue to evolve. It should be more active in the ‘design’ of Detroit’s environment – socially, economically, politically, and creatively. And while as a professional group, we do not have the luxury to move at the speed of digital or print media, we need to learn to become more flexible and proactive within our positions. We need to move beyond our proud baby steps and award ceremonies and seek to take gigantic evolutionary leaps. Otherwise, we WILL become obsolete and inconsequential. 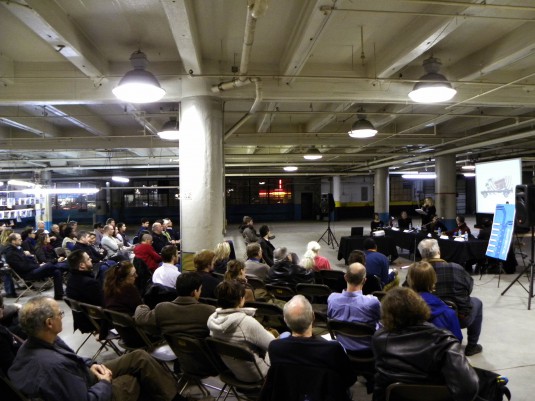 rogueHAA is a volunteer architectural, design, and urban advocacy collaborative based in HAA’s Detroit office. While HAA focuses on the thoughtful design and construction of buildings and landscapes, rogueHAA operates outside the boundaries of traditional professional design practice. The group’s primary goal is to serve as both a catalyst and forum for thoughtful design discourse through a series of initiatives including publications, competitions, installations, their collaborative design blog www.roguehaa.com , and their free multi-topic speaker series.

Melissa Dittmer is a design architect and associate at Hamilton Anderson Associates (HAA) a multidisciplinary design firm based in Detroit. She is the co-creator and director of rogueHAA, a volunteer architectural, design, and urban advocacy collaborative based in HAA’s Detroit office. While HAA focuses on the thoughtful design and construction of buildings and landscapes, rogueHAA operates outside the boundaries of traditional professional design practice.Melissa has been working on the Detroit Works Project, a multi-disciplinary, international effort to define the future of a depopulated, post-industrial city; she can be contacted at [email protected].

James Witherspoon is a designer at Hamilton Anderson Associates in downtown Detroit. He received an Americorp Award for a collaborative program he developed with Young Detroit Builders to design and build sustainable homes in Detroit. His work was selected for the AIA Descours 2010 Exhibition in New Orleans, and he is currently designing a high school for the Recovery School District and Orleans Parish School Board school construction program. James lives and works in Detroit. He can be contacted at [email protected]