We visit the Dallas offices of Gensler to discuss the role of the corporation in reversing urban sprawl. 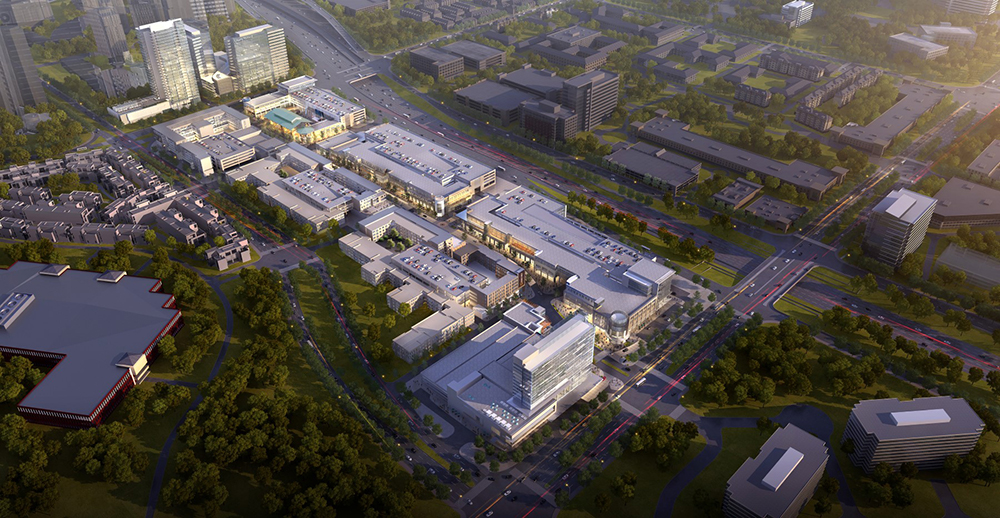 For the past three years Metropolis’s publisher and editor in chief Susan S. Szenasy has been leading a series of discussions with industry leaders on key issues surrounding human-centered design. On July 13, 2016 she talked to architects at Gensler’s Dallas studio and representatives from Hines Development, Hilti Construction, and the City of Plano about the role of the corporation in reversing urban sprawl. What follows is an edited transcript of the conversation.

Susan S. Szenasy, publisher & editor in chief, Metropolis (SSS): Interestingly, Dallas invented itself in the late 20th century, and now the city is reinventing itself once more in response to issues shaping 21st century living. Today we’re asking if corporations can reverse urban sprawl. The city of Plano is doing some interesting things within the Dallas-Fort Worth metropolitan area. How is Plano contributing to less sprawl and more urbanized development?

Peter Braster, director of special projects, City of Plano (PB): Anybody who knows Plano will probably agree that Plano is the product of sprawl, but that was 20 years ago and now the city is having to reinvent itself. This is Plano 3.0, and we are constantly working to react to our citizens’ needs and wants. One of the things we are working on is a new, $3 billion mixed-use development called Legacy West, home to three corporate campuses plus a lot of restaurants and different housing options in a space of 255 acres. I was explaining the concept of density and mixed-use developments to residents of a stereotypical suburb once, and I described it as the way our grandparents used to live, in that they likely lived above a store and walked everywhere. This doesn’t mean you have to live in Manhattan to experience density, but the idea of these market towns where you knew everybody and were connected is something we’re going back to. Cities like Plano aren’t afraid of density. 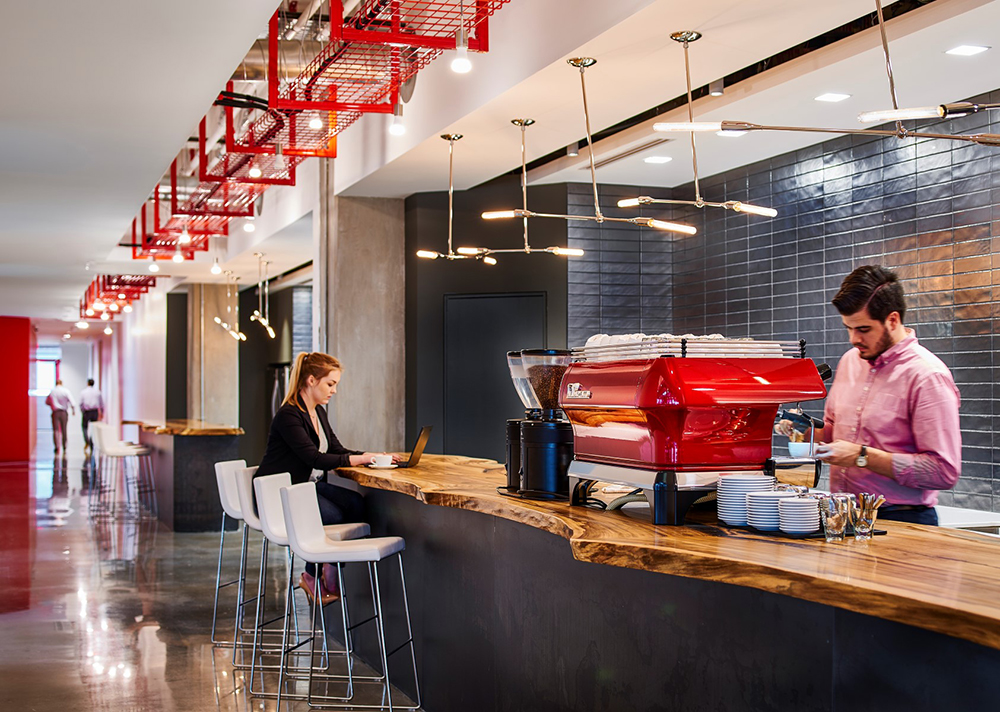 SSS: This sounds like a yearning for more connectivity than what is currently experienced in the suburbs. This doesn’t mean everyone is peering into each other’s backyards, it’s about being able to connect to others when you need to. But connectivity has many different phases—how does a developer view it?

Drew Steffen, managing director, Hines Dallas, (DS): The way that we’re looking at the world now is through a mixed-use, layered view. We are trying to make places where people want to live, work, eat, play, etc. Gensler has done a great job of walking us through ideas about making places a gradient of experience. We aim to create a locus of opportunity for people to have relationships, whether it’s an office, hotel, retail environment, or different types of housing.

Ross Conway, principal & design director, Gensler Dallas (RC): Then the strategy becomes one of how to tie all those elements together. Legacy West wouldn’t have happened without the corporate interest there. Corporations supply the people who serve the retail and restaurant business, but they also have brought people who want to live in housing near that, and their employees want these amenities too, so it’s a symbiotic relationship. Human resource departments know that in order to retain people, companies need to integrate these other uses rather than be isolated.

SSS: Let’s dig into the point of view of a corporate client,  Hilti, whose headquarters in Plano was designed by Gensler.

Leah Kelso, director, communications & brand development, Hilti (LK): Hilti is a construction company that originated in Liechtenstein and came to Tulsa, Oklahoma in 1979. That was where our US distribution operations were located, but we were having a problem recruiting young professionals, so we decided to move our headquarters to a place that would attract more of them while being in a top construction market. We decided on Plano because of the community. Our team members have this great opportunity to be surrounded by everything they need, and many of our team members have chosen to live in an area where they can walk to work and grab milk on the way home. Now that we’re in the right place from a community perspective, how do we design this space so that it represents who we are as a brand? This is important because the workplace is a recruiting tool. It tells the story of the company in an entirely different way. That’s why we hired Gensler. 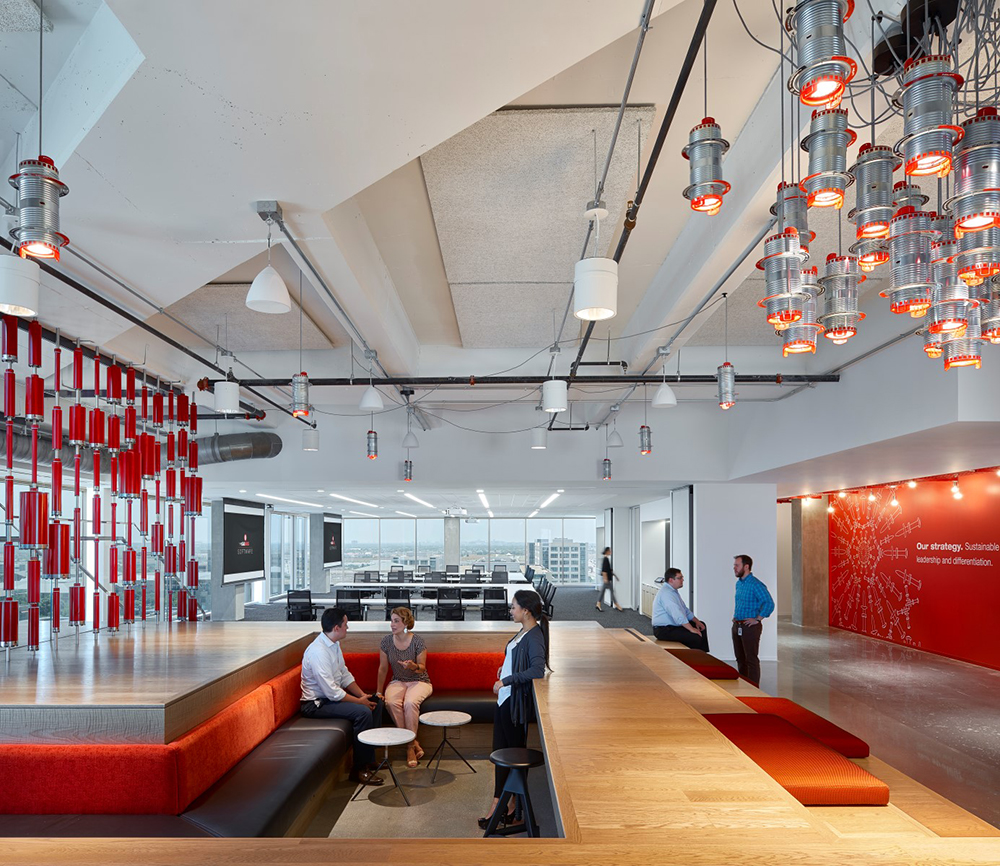 SSS: How did Gensler begin to create a design scheme for Hilti specifically?

Paul Manno, principal, design director, Gensler Dallas (PM): There was a collective vision about this project, and Hilti hired us because they really wanted to hear what we think makes great environments. Our process of communicating ideas back to them through renderings and touring other spaces enabled them to understand the changes that we were trying to create. Sometimes the best way to get an explanation is to see somebody else’s work. They may not like all the parts, but if they can see it, they can react to it, and we can understand that reaction in turn. The other advantage is that Hilti already has an amazing brand—the question is how you reflect it onto the space. Designers are supposed to spend time understanding a client’s products and how they have evolved over time in order to have it be reflected in the architecture.

SSS: Hilti went from being in an isolated corporate campus to suddenly being in a lively area. What had to change?

LK: Gensler came and looked at our space in Tulsa. That was our baseline. Then we came over to Dallas and saw Gensler’s and were able to decide that we wanted a little more of what they have. Looking at the environment and our primary goal of attracting a younger workforce, it was clear that Gensler would design for where we wanted to be in 18 months.

PM: Taking this into account, we designed Hilti’s new corporate offices into a legacy development. This meant less amenity space. If a company is isolated on a corporate campus, we need to build a cafeteria, some sort of retail space, and outdoor space to accompany the workspace, but moving to a denser urban location actually makes the work area more productive because we don’t have to create all these other kinds of amenities like gyms or terraces because they’re already there.

SSS: When you put 300 people and their families into a condensed area, a lot of services are needed to support them.  How do you deal with authenticity when assimilating into an area?

DS: There is no one formula to make a development authentic, but one way to look at it is to make it comfortable for people to be at their best. Rather than being in a LEED-certified building and claiming authenticity in that respect, we found that what tenants really want is to be able to control their environment and to be in buildings that cater to their wellness. Mixed use and walkable connectivity between buildings leads to more authentic opportunities for experiences and interaction. 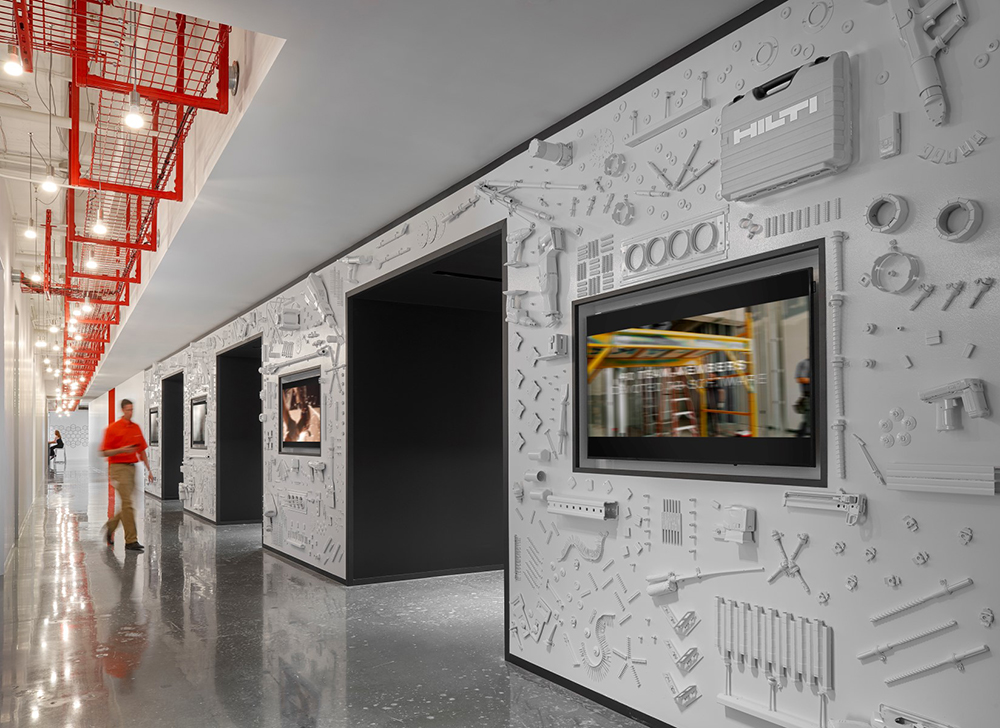 SSS: Drew, you are an architect by training and a developer by profession who really wants to make things that sell. Do you think that people notice that something really interesting was happening in your buildings if you figured out how to relate them more to the natural environment?

DS: I certainly don’t think it works for us to put down a glass office tower in the middle of nowhere and expect people to come. We engage with companies and adjacent neighborhoods to ask, “What should this area be and why?” Ultimately, it does come down to a capitalistic endeavor, but we aim to find that sweet spot by working with the right partners and design firms like Gensler. You need to push the envelope, then take a step back and see if it meets the goals to better the lives of people who spend time there.

PB: There is an interesting case of this building owner in Plano, who, for years, was very much against the idea of the city building a bike and hiking trail on his strip of land. Now, he has actually approached us to put one in because he is using the trail as a selling point for his office space. Time has changed, and now he sees the market.

PM: The other thing is just being more socially responsible with your space. This idea of building community has really impacted the workplace because clients are asking for this, and developers have to react to it in the types of spaces they offer.

RC: I think these types of interactions within the community are part of a larger wellness plan, where the idea of wellness is less about fitness and more about reducing stress through more opportunities to interact with people and the environment inside and outside.

SSS: The concept of wellness is really interesting to me because it’s much more accessible than some vague idea of sustainability, which everybody might not understand in the same way.

RC: When I first started using the word “sustainability” in the community work that I do, nobody knew what it meant. We started using other words such as authenticity and connectivity in order to express the idea, which more people were able to understand. The idea of wellness is the same concept, just another way of defining it. 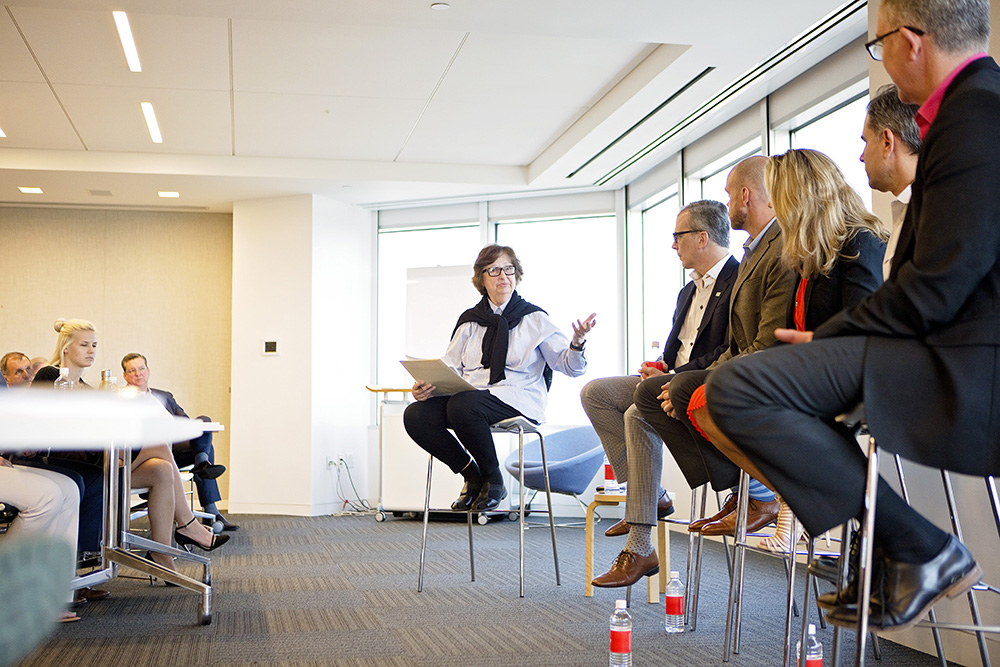 SSS: The other part of all of this is the switch to digital technology and communication changing our ideas of connectivity to a much more global perspective. Will we see some dramatic shifts in the built environment that reflect a more 21st century attitude towards all of these forces?

RC: In a sense, you can’t design for technology because the form is going to be absolutely different, but there is one massive technology change that will affect the way we design cities, and that’s the changes that will happen to the automobile—whether its driverless cars or more car services. I think it’s good, but it’s going to reduce the need for parking lots and make a lot of the stuff we are building right now become obsolete. The changes will be slow at first, but I think it will grow over time and change the way we commute.

DS: We are thinking about this constantly in the new buildings we are working on in terms of how we can develop them so that parking can be converted back into office spaces or other uses if needed.

SSS: I really love that idea of making buildings for many different uses and rethinking what to do with them rather than throwing them away. How do you see Dallas and its metropolitan area contributing to this kind of tighter development?

PB: Mind you, we’re still building further and further out, and I don’t know how far out you’re going to go from the core of Dallas and still be successful, but I think that’s why cities like Plano are really trying to look to become the leaders in how to respond to urban sprawl.

DS: We’re a relatively young city. We are not Manhattan, but we can be an incubator for these ideas. I’ve met some people from Plano or Frisco, who told me that they have never been to Dallas-proper because they don’t need to go there anymore, everything they need is in Plano or Frisco or wherever they live. We are creating places in Dallas-Fort Worth that give people everything they need right there to make it a great place to live, work, eat, and play. 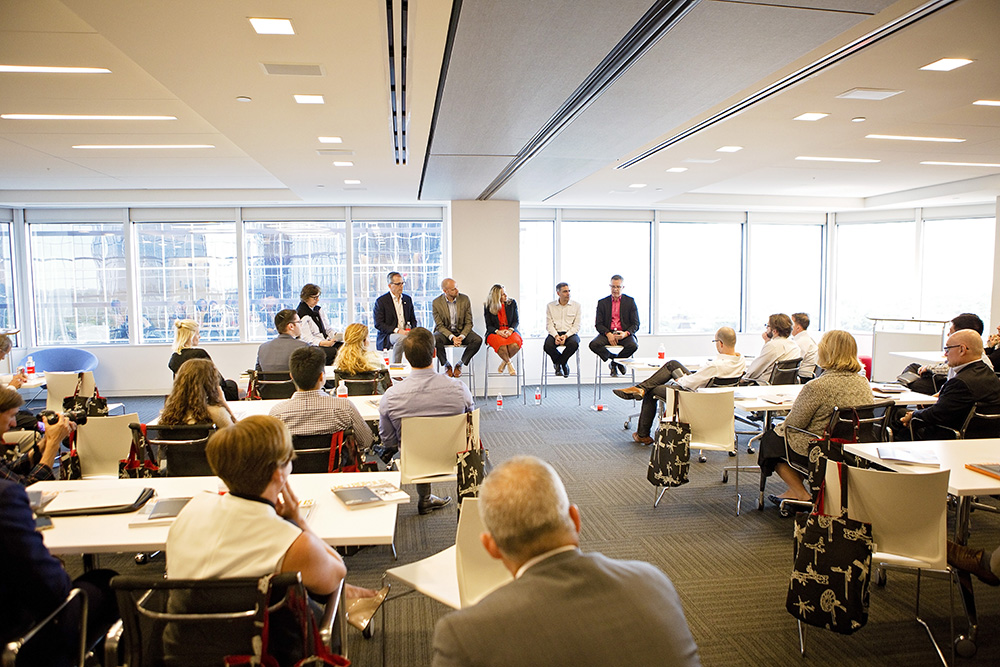