Can the Outdoors Help Kids Learn?

In the February issue of Metropolis, our cover feature poses the question, “Can Design Help Kids Learn?” The article “Open-Ended Learning” features schools from all over including Canada, Qatar, and India. In Alaska (a little more local to home, and, as I’ve learned from Ms. Palin, Russia), an academic advisory board in Fairbanks is of the opinion that going outside can help children learn.

The new charter, Watershed School, is currently in search of students for next year’s launch. The K-8 school’s mission is to use the outdoors as its classroom, in fact the 120 minutes doubles the local district’s requirements. All the while the students learn the 3 R’s (reading, ‘riting, and ‘rithmetic) and become more acquainted with the ecology of their community. The Daily News Miner  also points out future lesson programming could include “developing schoolyard wildlife habitats, school gardening, [and] monitoring the water of the Chena River.”  Here’s to hoping the board builds a new school that’s easy on the environment from which they plan to teach.

In “Open-Ended Learning“, I write about Adlai E. Stevenson High School, another school that hopes to utilize the outdoors. This school in the Bronx wants to retrofit a large portion of the roof (with the help of Rafael Vinoly Architects) with a green roof; and their curriculum would include the new outdoor addition. Both schools’ plans for the use of the outdoors are visionary and hands-on approaches to school work. I would think the community would embrace getting their children involved with the added bonus of a little exercise (Note the disgruntled Alaskan residents’ reponses at the base of the article—”How about some good old education and cut the BS out of this and all the public schools,” says James. And, to be fair, the stall in the Bronx school’s plans is due to a funding problem). 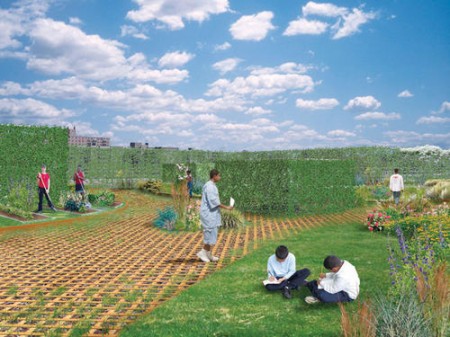 I think back to my own education and remember a class called “Outdoor Education.” Easily 99% of the class was spent indoors with the final test—lighting your own campfire with found wood and one match—was conducted in a patch of woods just beyond our asphalt parking lot. With a little more classtime outside then, I might know a bit more about trees today.

Of note, I learned of the Watershed School on the Green Charters Schools Network blog. It’s a rich source of like-minded school authorities united in the idea to take the class outside.