In 1883, architect Frank Furness, whose busy office once nurtured a young Louis Sullivan, had just completed the Undine Barge Club, the finest rowing clubhouse on Boathouse Row, a winding pearl string of boathouses along the Schuylkill River of Philadelphia. His precisely crafted stone building exhibited the crisp shadow definition, color, pattern, texture and bold ornament of his best work.

Ever the outdoorsman, Furness, fishing buddy of Teddy Roosevelt, was a natural choice for a rowing club design commission. Undine stands there now, sited just upriver from neighboring PennAC, the club of fabled rowers Jack Kelly, Sr. and Joe Burke.

Famously irascible, swearing a blue streak while drawing like an angel, Frank Furness once expressed a desire to gather all his clients from across his long-spanning, successful career in one room…and shoot ’em!

Did I mention that the guy was a colorful character? It’s hard to separate Furness, the sword wielding, horse riding Civil War Medal of Honor vet with his muttonchops and intentionally loud plaid suits from the distinctly animated, richly patterned buildings he produced. And why should we?

Yet with the notable exception of the Furness Library at the University of Pennsylvania (detailed restoration by Robert Venturi), the Pennsylvania Academy of Fine Arts (PAFA) and a few others, Philadelphians rode roughshod over much of Furness’ virtuosic built legacy. It was, perhaps, more a matter of public ignorance than resentment of his flamboyant personality and architecture that sent the wrecking ball swinging blithely from pillar to post through many of his finest works. 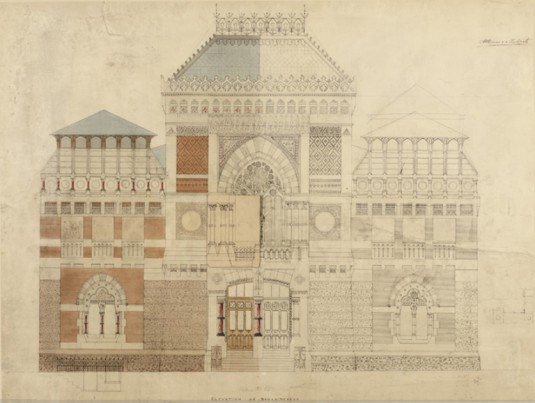 Our focus is 2012, the Frank Furness Centenary year to be celebrated at the Pennsylvania Academy of Fine Arts (PAFA) in a major exhibition opening this coming September. The show will highlight the original Academy building and will be part of a constellation of tightly coordinated exhibits, now in planning between various museums and libraries throughout the city.

New PAFA director, Harry Philbrick, is “obsessed with architecture” and realizes this centenary celebration will be the perfect catalyst for an ambitious restoration program that he envisions. A symposium with a broad array of experts is also in the works, just to kick off the discussion of how to tackle this architectural gem. Philbrick wants to convert glaring energy liabilities into assets. Architectural and lighting potential still to be mined would be a dream project for the likes of architect Renzo Piano. 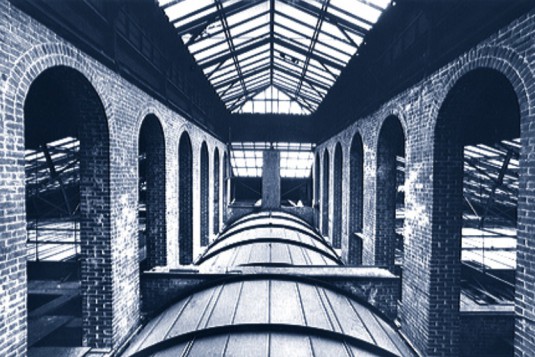 Attic of the Academy (vintage view) – Furness’ greenhouse for daylighting the art galleries below is now an almost impassable forest of hulking 20th century ductwork, woefully inadequate to the task of conditioning temperatures and conserving energy.

When PAFA recently opened its vast hold of new gallery and office spaces across the street in a converted automobile factory it took certain pressures off the original Academy building. Now office space and conservation lab functions can move out so the original building can, finally, sing. Opportunities for tucking in new uses have already presented themselves in director Philbrick’s estimation, including the possibility of an intimate, light-controlled drawing exhibit room and an art education space for children.

It’s a process similar to conservators removing darkened layers of soot and varnish from an old painting to bring it alive as if the artist has just applied fresh paint. The difference is that the PAFA building itself appears to be in perfectly fine shape to the casual observer. But consider the unfortunate, early 1950’s H2L2 renovation of PAFA that removed ventilators capping the main façade and original entrance vestibule resulting in a distortion of Furness’ exacting study in proportions. That agenda item alone holds the exciting prospect of restoring their visual aspect along with a modern re-engineering of those same stacks to substantially reduce energy loads on the building.

Overall, conservation or restoration goals are now about re-thinking function; space and energy systems to simultaneously bring the building closer to Furness’ original intentions, sensitively extract new uses and propel it into the new century as a sustainable cultural institution.

Cultural historian and author George E. Thomas declares, “The Academy is a profoundly revolutionary building. Furness was a brilliant logician in terms of how people use a building.”

Need to move a live horse into your museum building so art students can study comparative anatomy? Furness anticipated that with a huge, arched loading entry door that could accommodate most anything the museum would need.

Need your art studios to capture a steady, glowing north light to enhance the study of classical plaster casts? Furness, in discussions with painter and teacher Thomas Eakins, worked out a spectacular, massive, wrought iron truss resting on a series of perpendicular brick bearing walls to create an outrigger space. Daylight pours in with a high, running wall affording simultaneous privacy to the street. Characteristically, the exterior interstices of the truss are in-filled with ornamental brick patterning by Furness, subsuming his technical feat into an overall, rhythmic composition. 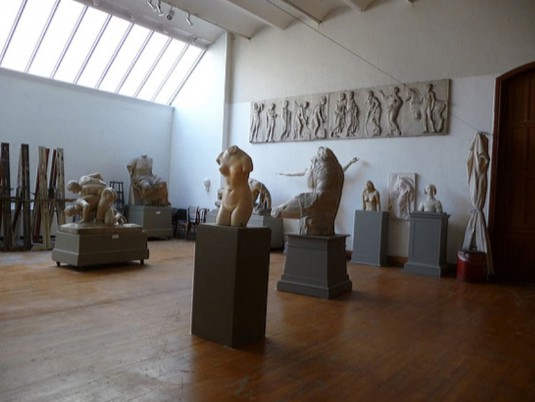 Sneak Preview of Cast Hall — Museum visitors do not even have visual access to these daylight studios with classical plaster study models where painter Thomas Eakins once reigned. Museum Director Harry Philbrick wants that to change and has a better idea.

Need glorious lighting to bring out the rich detailing of your 19th century masterpieces? Furness supplied ample gallery skylight. He simultaneously introduced a passive-cooling system with a louvered greenhouse rooftop, drawing cooler air from street level through and out of the building. Heating vents are concealed or integrated with ornamental screens set into decorative column bases.

The list goes on. As the expression goes, Furness generated a surprisingly flexible building with “good bones,” and note to contemporary architects, he left room for creativity within his creation.

Furness was, emphatically, not just about the bravura ornamental display that still entertains people from the main Broad street facade. Frank Furness could not have completed literally thousands of building commissions if he had been some kind of fool, unable to satisfy client’s wishes. Furness knew how to solve problems. He also knew how to find poetry in the prose of life, a philosophy that emanated from the teachings of Ralph Waldo Emerson, a life-long friend of his preacher father’s. He drew from life rather than from European history. 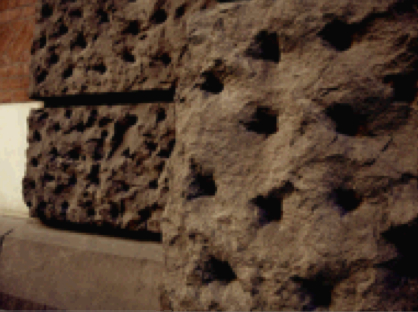 “I FINALLY FIGURED THE BASTARD OUT!”

George E. Thomas is rightly pleased, exulting in his recent discovery. He had a lot of time to think about his subject before it all, finally, snapped into place.

In 1973, he wrote and researched for the catalog on a major Furness show at the Philadelphia Museum of Art. He was the lead author of “The Complete Works of Frank Furness” that nearly doubled the canon of known Furness buildings. Later, an addendum of fifty or so works, “More Complete Works of Frank Furness,” was included with a wink. His co-authors were Michael J. Lewis and Jeffrey Cohen with Robert Venturi.

Thomas is now wading into a new book on Furness (working title – “Frank Furness: Architecture and the Age of the Great Machines”) due out for publication in a year or so, but was generously willing to share some of the insights he has gained in the interim. I can assure you I found them nothing short of revelatory.

To set the stage let’s just agree that the Academy is a masterpiece. You’ll have to experience for yourself the cumulative power of Furness’ assembled cut stone, raw textures, the eccentric, cast brass balustrade, the rush of space sweeping you up cascading stone stairs to a polychrome symphony of interior spaces to believe it, though. 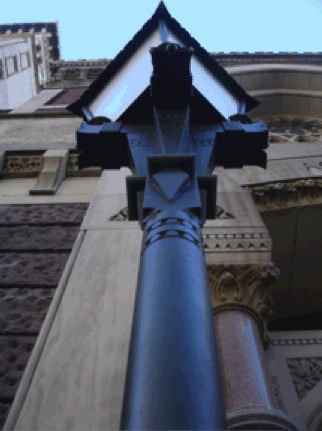 Grabbing hold of a deep, gold-green brass lamppost standing out front of the Academy on Broad Street, Thomas says we have to look closer and place all these swirling design elements into context.

Philadelphia was a major industrial center. The huge (eight city blocks long) Baldwin Locomotive Works was just up the street from the museum site. According to additional research by Thomas, the Academy board at the time of the museum’s inception was equally divided between members of the city’s famed Franklin Institute (of science), and the usual array of bankers and businessmen while, an engineer, Fairman Rogers, chaired the building committee and a majority of its members were scientists and engineers. 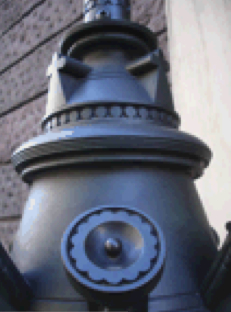 So the brass ornamentation at the Pennsylvania Academy of Fine Arts fits the character of industry? And those are drive shafts, drills and ball bearings that I’m seeing in those details? Furness’ grammar of ornament was a kind of branding “made up of industrial bits,” Thomas asserts. Furthermore, it dawned on him that Philadelphia was an engineering city and its engineers were Furness’ clients. They understood him — and that’s the rub!

All that said, Furness was not alone in his Industrial Expressionism. Joseph Wilson of the Wilson Brothers, the unsung architect of the cavernous, highly textured, stone Reading Train Terminal planted just blocks from PAFA, is another example.

But that’s another book, says Thomas. 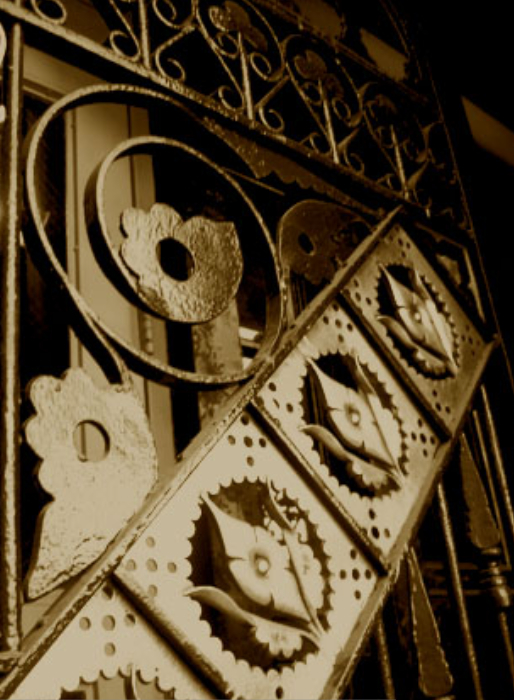 When it comes to Furness, though, George E. Thomas pulls out all the stops, trumpeting his achievements as a great colorist and master of light. As is true of exemplary architects orchestrating sensual movement through space, Thomas exclaims, “He just won’t let you alone! What is powerful is that he engages us with light. [His buildings] have the energy of a big steam engine and that’s what’s exciting.”

Director Harry Philbrick enthusiastically concurs, describing Furness’ Pennsylvania Academy of Fine Arts as a “factory for art that expresses the value and act of making art.” As its grand, stone staircase ascends from street level to galleries in skylit heaven he asks rhetorically, “What’s in heaven? Beautiful paintings.”