For the second year in a row, Metropolis publisher and editor in chief Susan S. Szenasy has been leading a series of discussions with architecture and design leaders on key issues surrounding human-centered design. On March 16, she talked to associates from the Chicago office of Skidmore, Owings & Merrill LLP (SOM) about the importance of interdisciplinary partnerships and ways of fostering collaboration that can effect lasting change. What follows is an edited transcript of the conversation.

Susan S. Szenasy, Metropolis (SSS): Let’s begin with your timber skyscrapers. What’s your process that gets you to the point where timber skyscrapers are a reality? The first thing everyone asks is “Will they burn down?” What does your research reveal about materials?

Benton Johnson, structural engineering associate, SOM (BJ): If you think about what the first skyscrapers were and how big they were, you’re really thinking about the Home Insurance Building in Chicago, from 1884. About 20 years later, the Butler Brothers Building was built in Minneapolis. It’s nine stories tall—140 feet—and it’s lasted for 108 years so far. Timber was right at the forefront of high-rise construction because heavy timbers were available, and that kind of construction was trusted at the time. There was the Ingalls Building in Cincinnati, Ohio, which was the first concrete skyscraper. It was said at the time that there’s no way concrete can support its own weight. It will collapse. It’s 16 stories tall and still standing. The story goes that when they built Ingalls, they built the entire thing on shores before they removed a single one of them. There were photographers on the street ready to catch the photo of the building’s collapse. They pulled the shores at three in the morning, and of course, nothing happened. Part of thinking about what is a skyscraper in our time is  looking back at our past. New materials are always met with skepticism. Now, the tallest buildings in the world are generally made out of concrete or have a large part of concrete associated with them. No one thinks twice about it. Pushing the bounds of timber technology and creating successful projects is what’s going to be key to changing that perception of the material.

SSS: Can you describe the most sought-after material to build wood high-rises today?

BJ: At this point we should talk about trees in general, and what they’re good at and not so good at. It’s also important to distinguish between wood and timber. If you have a light-framed wooden building, it has a very small or nonexistent fire rating. As a result, you’re required to build much smaller structures out of wood. A heavy timber building is large and dense and has the ability to char and be fire-resistant. The code rewards you with additional height and area because it’s more fire-resistant. The only problem with constructing heavy timber buildings today is that we ran out of heavy timbers. So we’re overcoming that with a technology called mass timber. These are things like cross-laminated timber, glulam [glued laminated timber], nail-laminated timber, laminated veneer lumber; the list goes on. The key is that these mass timber elements are actually built with softwoods, things that grow quickly and sustainably. So smaller pieces are glued together to give you the structural and fire performance of a heavy timber, but this is all done with very quickly growing softwoods.

SSS: On the other side of the innovation spectrum, there’s a lot of talk about 3D printing of all kinds of objects, including  houses and cars. What are you looking for in building-material performance, and how does that get discovered within the group that you have put together in Oak Ridge?

Roderick Jackson, PhD, group leader, buildings envelope systems research, Oak Ridge National Laboratory (RJ): Some of it needs to be exploration. You can’t design until you get that first stake in the ground. That’s the first step. Some of our partnerships utilize the expertise of structural engineers, so that we can say, “Let’s take our best guess, or take what we know, and establish a safety factor.” At the lab, we have expertise in material science, helping us to figure out the process. Based on what we’re finding out, we can go back and say, “Maybe using ABS with carbon fiber is not the way to go.” We go back and ask the architects, “What kind of material properties do we need?” We can then move on to ask, “How do we develop those materials?”

SSS: Architecture and engineering are basically optimistic professions. You’re building the future. Your buildings will be there for your grandkids. How do you feel about this shift in architecture when it comes to who does the work and what kind of work needs to be done, as opposed to just hanging on to what we know?

BJ: For rigorous architects and engineers, it’s about finding processes and solutions to the problems we’re presented with. The solution that comes out on the back end shouldn’t be driven by your preconceptions about what the solution should be. It should be driven by the existing demands and the problems that show up at your door. You’re not imposing a solution on the material. You’re letting the material speak for itself. In terms of how we go forward and try to find new solutions in the future, I would say it’s about bringing it back to what the profession ought to be in the first place, which is finding solutions based on the demands that are presented to you. If that means changing the way we’re thinking about architecture and manufacturing, so be it. That’s the hallmark of a good designer. It’s about having the problems you’re solving become evident in the design. There’s nothing worse than application and decoration just for the sake of the aesthetic. If you can’t provide a structural benefit or an energy benefit or something else, then it’s really not worth pursuing.

Luke Leung, PE, LEED fellow, director of sustainable engineering, SOM (LL): One of the most important innovations in the future will be to reacquaint human beings with nature and learn how we can thrive together with nature, but a lot of the discussion so far has been centered on technology. 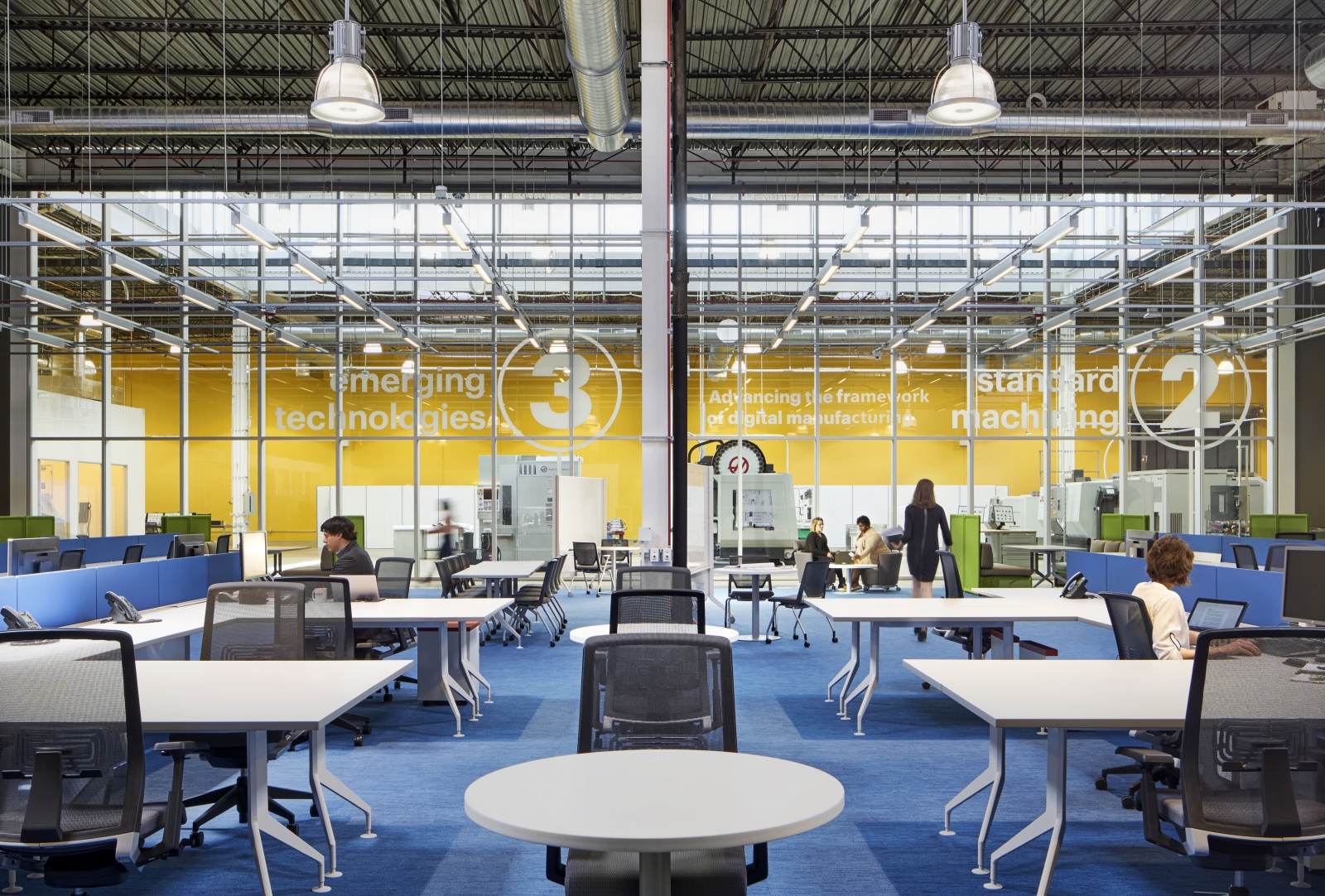 SSS: We were just at another firm that talked about building an early childhood development center on the University of Chicago’s campus. Those children are not only active indoors, they’re experiencing the outdoors. They go around with magnifying glasses, notebooks, pencils, and paper to record their observations. This idea of connecting with the natural world is very much part of the current preschool pedagogy, and it can be found in high schools, and at universities as well. You’d be happy to know that the connection to nature is happening in a big way. Let’s go up the scale now and learn about UI Labs in Chicago.

Steve Fifita, executive director, UI Labs (SF): UI Labs is focused on collaborative innovation and the belief that in order to tackle large opportunities for change at the industry level, you really need to bring in large groups for collaboration. When we think about collaboration, there are basically three main bodies. There’s the policy piece, from a lawmaking and a regulatory standpoint. There’s the academic piece and then the practitioner space. Our conversation has mostly been focused on the convergence of the digital and the physical. That is our playing field. We are built on the premise that collaborative innovation drives accelerated success. While we are interested in new materials, we’re much more interested in what we can do about being smart about the process itself. Another thing that’s very important to us is this notion of demonstrating technology. What’s difficult, especially if you’re driving transformation at a city or an industry level, is how you get those who will eventually adopt the technology to understand the concept. How do you demonstrate digital manufacturing? You have to experience it.

SSS: Can you describe one of those points of interest where you’re actually testing some of your ideas?

SF: The city of Chicago, for instance, owns and manages about 60 percent of the rooftops in the city. Therefore, the problem statement that they start with is “I’m interested in managing buildings as a fleet.” You have to be able to manage the smartest buildings, moderately smart buildings, and less smart buildings.

SSS: How does the feedback mechanism work?

SF: The first step of this feedback from a building is the building manager. From a visionary, evolutionary standpoint we want to make buildings self-actualizing, where they actually interface with their users, but that’s down the road. At this point, it’s more tied to engineering. Those individuals who are managing, repairing, or servicing the building are setting up a series of dashboards that allow them to leverage machine-to-machine learning, so machines can talk to each other and to individuals. This way the building can let you know what needs fixing and minimizes the times that things need to be fixed. We haven’t quite gotten to the point where there are privacy challenges from a broader standpoint. The point here is that, eventually, the data needs to get to a dashboard where it is both relevant and timely and comes back to the end user.

SSS: Ben, is the kind of feedback Steve talks about game changing?

BJ: Being in an environment of tall buildings, an interesting plug-in would be one that could inform you about the approach of a windstorm. If you’re an occupant in a high-rise building, you might have some motion-perception issues, you might get seasick. By having smart data, you can potentially link your structure to weather and seismic data. So the question is “Can a structure somehow adapt itself as a result?” A lot of times, we’ll put dampers in buildings to make them more comfortable from a wind perspective, or we’ll put seismic-energy dissipating devices in order to absorb an earthquake. If you can start expanding the Internet of Things to building structures, maybe buildings can be more resilient, their service life can be extended, and ultimately the whole process can be more sustainable because you’re not replacing as many buildings in the long term.

SF: We now have feedback on buildings that we used to have only on small devices. That’s exciting. This is game changing.

SSS: We now know much more about our physical environment than we have ever known before, and we’re learning more every day. With knowledge comes responsibility. When you’re an informed citizen who understands that an action leads to a specific result, that everything has a consequence, that, at its heart, signals an ethical moment.

This Metropolis Think Tank conversation is presented in partnership with DuPont Surfaces, KI, and Sunbrella.