The largest gathering U.S. history is about to occur in our nation’s capital. Can American Cities learn to truly embrace the crowd?

Controlling the crowd at President Theodore Roosevelt’s inauguration in 1905

Saturday marks the beginning of the inaugural celebrations and as a resident of Baltimore, I am preparing for Obama’s arrival here tomorrow. He and Biden will stop at Pennsylvania Station during their train trip south and then travel a short distance via motorcade to War Memorial Plaza outside City Hall. Obama will address the crowd before continuing on to D.C. Baltimore officials are preparing for an onslaught and warning of over-capacity crowds for tomorrow’s event. The plaza where Obama will speak holds about 30,000 and modest estimates suggest crowds near 150,000, in spite of the predicted below freezing temperatures. If as many people descend on D.C. this Tuesday as anticipated, Obama’s inauguration will be the largest single gathering in U.S. history.

This whole thing has got me thinking about crowd control.

America is, let’s face it, a country wary of the crowd. We don’t do public space well. We actively design out elements of our population with things like bum proof benches. We welcome guests to our nation’s capitol with a bunker. 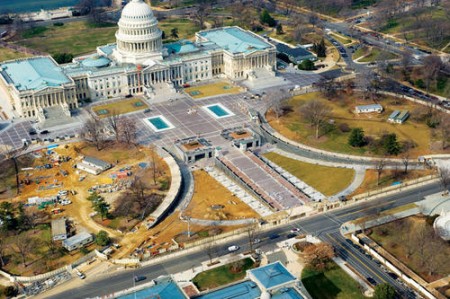 The 1960’s had a particularly damaging effect on architecture. Forty years after the MLK riots we are witnessing an historic presidency, and yet the legacy of ’68 is still very much alive. It’s remarkable to realize how many of my own experiences have been marked by crowd control design born out of the aftermath of those riots and student protests. I attended a university with a campus designed in the 1970’s at a time when crowds seemed a frightening prospect and students were not to be trusted. The student union was parceled in such a way that large groups could not form. Long corridors between buildings had doors opening in opposite directions—one opened in, the next opened out—so that if someone tried to run from security they would get tripped up. The whole place had a Panopticon feel.

In Baltimore, you can still see the shadow of  ’68. North Avenue, once a bustling urban streetscape with markets, jazz clubs, and restaurants, was hit especially hard by the rioting and it subsequently shuttered itself to the public. This is changing today, but it has been a slow turn around. 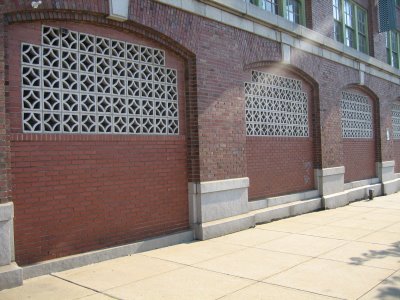 A legacy of ’68: Defensive architecture on North Avenue in Baltimore. The windows were bricked up against the pubic sidewalk.

Of course, the spirit of the gatherings in the coming days are a marked difference from the anger and frustration of forty years ago. Here we are prepping for celebration, for an administration that advocates openness and parity.  I am hoping things go well. I am hoping we can make this work without incident.  What would be even better, though, is if this spirit of openness could translate into more thoughtful public spaces and crowd design in general. Many will be left out of the festivities. In D.C., strollers are not allowed, making it near impossible for parents with toddlers to attend. The elderly and the disabled have a decided disadvantage. In Baltimore, officials are encouraging satellite parking for cars and the use of public transit, yet bicycles are not allowed inside War Memorial Plaza and bike racks are not being made available on the periphery, which is a lost opportunity in my mind. How can we start to think about designing for the crowd?

I recently came across an interesting article from 2007 that addresses modern crowd control. The author opens with a description of the ancient stadium in Pompeii.
“In many ways it felt just like modern stadiums. That’s not surprising;the design ethic of modern arenas still borrows liberally from classical Greek and Roman architecture. But at the same time, [G. Keith ] Still, a world-leading expert on crowd management who has consulted on some of the biggest crowd-­control events in the world, including the Haj pilgrimage to Mecca and the…Beijing Olympics, felt something different from today’s stadiums at Pompeii. ‘Everything seemed so much easier,’ he says. ‘There was enough space for everyone. Entrance and exit were simple, elegant. It wasn’t just a stadium, it was an integrated part of the city design.'”