If you think Thom Mayne designs buildings that stand out for the sake of standing out, you’re only partially correct. Last week, at the Center for Architecture in downtown Manhattan, Mayne gave a talk on  “performalism,” a portmanteau that describes how architectural form can influence building performance–the way, for instance, the scrim-like façade of Morphosis’s […]

If you think Thom Mayne designs buildings that stand out for the sake of standing out, you’re only partially correct.

Last week, at the Center for Architecture in downtown Manhattan, Mayne gave a talk on  “performalism,” a portmanteau that describes how architectural form can influence building performance–the way, for instance, the scrim-like façade of Morphosis’s San Francisco Federal Building effectively replaces a traditional cooling system, or the dramatic roof of the still-in-process Phare Tower that doubles as a wind farm and electricity generator, both engineering feats as much as architectural ones. The idea, according to the architect, is to use architectural skins and shape to increase environmental performance, reduce financial burden, and integrate various programmatic and mechanical systems: to create, in Mayne’s words, “layers and layers of performance.”

And, of course, to produce a building that grabs attention. Partly an explanation of Morphosis’s building process (which relies enormously on computers, even to the extent that hand-drawn concept sketches are eschewed in favor of 3-D models), partly a review of performance-based design in his own past projects, Mayne’s talk also served as a defense for his firm’s aggressive aesthetic. The architect was quick to point out that that the appearance of his buildings is never a foregone conclusion at the start of a project–when approaching clients, he explained, “I had been used to arguing aesthetics, but that’s a hopeless case”–but was equally insistent that the look of his buildings matters, and not in a superficial sense; beyond its environmental benefits, the skin provides an aesthetic that differentiates an otherwise generic building from its surroundings, conjuring the extraordinary out of the ordinary. 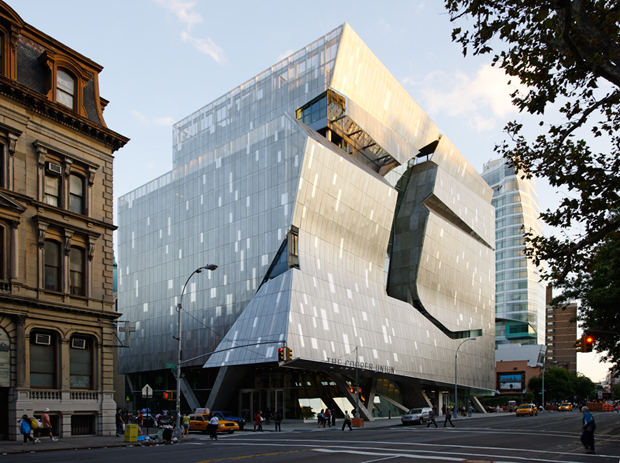 Which is not to say, however, that his projects are not contextual. Much of Morphosis’s work, including the new academic center for the Cooper Union, in New York (above), is consciously–and successfully–urbanistic. The building acknowledges its setting high and low, keeping scale with neighboring buildings and opening its lobby and swooping staircase to the street below. And in this way it’s like many Morphosis projects, which rely on a careful reading of the urban landscape before jarring that landscape with their own, extraordinary sensibilities. It’s no wonder that Morphosis tends build in dense urban areas, and no wonder Mayne claims inspiration from cities, since, whether or not you like the result, Mayne’s aim is to make buildings that don’t hide their complexity but celebrate it. The goal is the creation of a place that’s functional but unpredictable, alternatively confusing and welcoming and tough. Or as Mayne puts it, “a place like a city.”