The artists Haas&Hahn— Jeroen Koolhass (yes, there is a Rem connection) and Dre Urhahn—are heirs to the De Stijl movement, applying early 20th century Dutch principles to 21st century cities on a colossal scale. Playing with form and mass, unburdened by the restrictive tenets of De Stijl, they burst into Brazilian shanty towns, called favelas, with a riotous display of color and […]

The artists Haas&Hahn— Jeroen Koolhass (yes, there is a Rem connection) and Dre Urhahn—are heirs to the De Stijl movement, applying early 20th century Dutch principles to 21st century cities on a colossal scale. Playing with form and mass, unburdened by the restrictive tenets of De Stijl, they burst into Brazilian shanty towns, called favelas, with a riotous display of color and geometry. 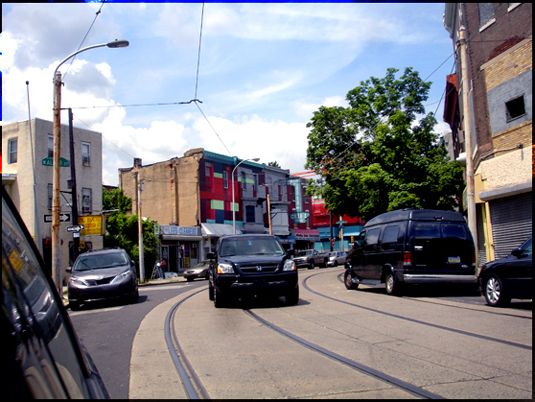 Recently, Philadelphia’s renowned Mural Arts Program (MAP) invited the two artists to set up shop in the city for a year and a half. Now living in North Philadelphia, they’ve started work on three city blocks of community-derived designs. Rounding the gray bend of Germantown Avenue, you suddenly see brilliantly colored patterns, and feel an instant sense of well-being. This neighborhood has never seen ART on this scale before. Will this favela-painting thing really work here? 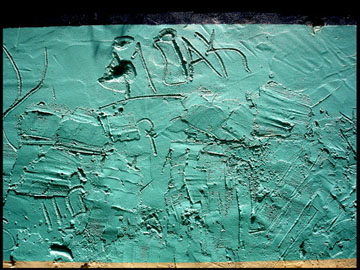 The artists consider the invitation from MAP to be “a huge honor”. “When we started we didn’t know if this idea would carry across the ocean,” Dre Urhahn confesses. Within a few months of his arrival in Philadelphia, Urhahn understood more about how the City of Philadelphia works than any of its citizens wringing their hands about urban blight. 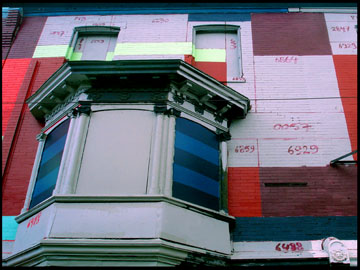 Last September, Urhahn and Koolhaas found themselves in the middle of Philadelphia’s byzantine tangle of city regulations, navigating and negotiating every step of the way to accomplish their goal. Urhahn is bemused that some of the very agencies that initially wielded red tape have since granted tacit approval, even encouragement, to the artists’ legitimized rule bending. The City of Philadelphia Commerce Department was already on board as a major partner in their painting program. 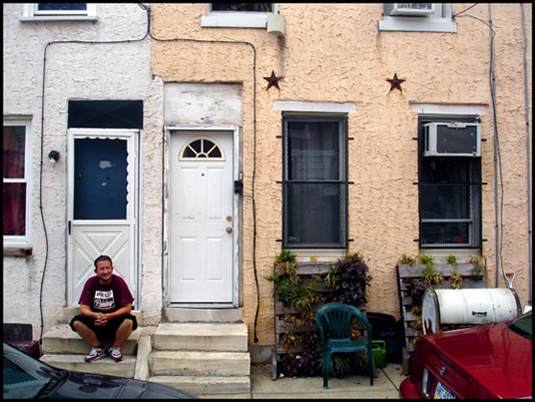 Dre Urhahn sits on the stoop of his home in North Philadelphia. El Sawyer, the director of Village of Arts and Humanities and the key neighborhood liaison for the project, lives next door. Jon Kaufman, filmmaker, who waves to us from an upper window, is paid to videoblog for the painting project. Urhahn was moved when a complete stranger came up to him recently, warning him that there had just been a shooting on his street. This break with the prevailing “no snitching” code was a sign that his team had been accepted into and cared for by the community.

Scanning the main thoroughfare with its boarded up windows, blank storefronts, and empty lots, Urhahn reveals what he sees as the fundamental difference between working in Rio, Brazil and Philadelphia, USA. “Ownership,” he tells me. In Brazil, if you build a home it’s yours. If you want to paint your home, it’s your decision.

Along this section of Germantown Avenue (and other areas in the city), there is no ownership by the community. Yet, every property in the new painting zone will be traced to its owner, whenever possible. Typically, properties held by absentee owners become derelict, abandoned and, ultimately, collapse. Vacant lots (some 40, 000 currently in Philadelphia) portend a sorry tale of lost commercial potential, social deterioration, and crime.  “It’s like a coral reef. It’s dying,” Urhahn says. 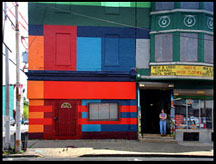 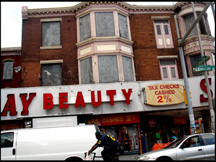 “Philly Painting,” the retro looking logo designed by the Favela favela Painters painters, is now a familiar sight in the neighborhood. All the  painters (5 base crew plus 2 team leaders, Felix St. Fort and Jared Wood) are trained and paid through the Mural Arts Program, working full time. An additional crew of youths are paid by the Philadelphia Department of Human Services (DHS). A group of eight participants from Restorative Justice paint one day a week.

Each store-owner signs off on a color scheme drawn from 35 color palettes and patterns extensively researched and photographed, locally, by the artists. In contrast to the “messy vitality” of American cities praised by architect Robert Venturi, this project is a bold social intervention, introducing an element of uniformity that will knit the commercial corridor into a harmonious, marketable entity. 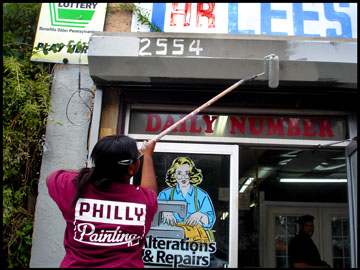 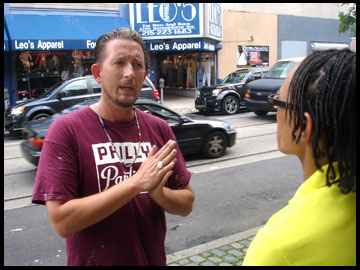 Urhahn had to reassure a Germantown Avenue merchant who wanted to know if her business will be disrupted when painting begins. Scheduling work during off-hours or on Sundays is one strategy the team employs to maintain access to stores.  Depending on location and potential hazard, they also create a safe corridor for people to walk under. 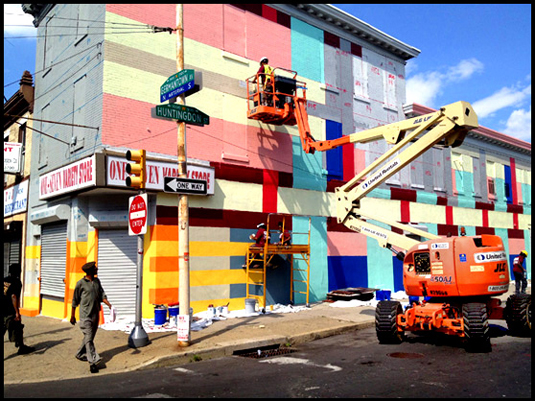 As we walk the length of the Germantown Avenue territory slated for painting, neighbors, young and old, often greet Urhahn warmly. He meets them with genuine ease, sincerity, and warmth. It does look like the first wave of favela painting has successfully crossed the ocean.

Dre Urhahn confides with a smile that the greatest compliment the Favela Painters have received for their work on this struggling commercial corridor is when people in their cars stop and shout out, “Thanks for making it look good!”