Architect Jeanne Gang on the terrace of Aqua, an 82-story skyscraper in downtown Chicago. Photo: Anna Knott. The first time we met, Tim McCormick was standing in front of the colorful community center that Jeanne Gang had designed for his thriving non-profit. The centerpiece of the ground floor was set of large steps, with dark […]

The first time we met, Tim McCormick was standing in front of the colorful community center that Jeanne Gang had designed for his thriving non-profit. The centerpiece of the ground floor was set of large steps, with dark green shag carpet cascading down the entire thing. After the usual pleasantries, I asked McCormick what he thought of the space, and he magically lit up. He couldn’t wait to show off the building. 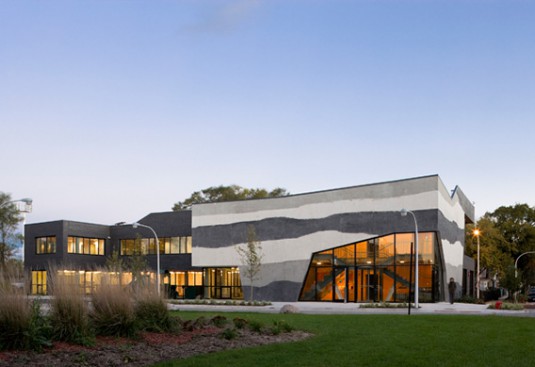 McCormick quickly came across as exactly the kind of caring leader you’d want running a community center and nonprofit focused on reuniting foster kids with their biological parents. And though he may have quietly groused about the extra money spent cleaning the abundance of windows in his prized building, he proved to be the type of client that Gang and her team needed to realize this design marvel on Chicago’s South Side.

Just like other Studio Gang clients that I’ve spoken with, McCormick exuded deep pride and gratitude for the extraordinary pro bono contributions made by Gang and her team. The moment that she was announced earlier this week as a 2011 honoree of the MacArthur Fellows Program (more commonly known as the “Genius Award,” to the chagrin of its recipients), I thought not of her acclaimed Aqua Tower or other well-published work, but instead of her roster of pro bono clients, like McCormick, and the people they help each day—and what the award might possibly mean to them. 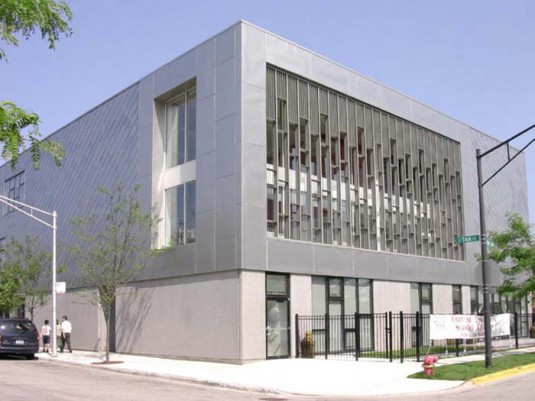 The Kam Liu Community Center, designed by Studio Gang for the for the Chinese American Service League.

While Studio Gang proudly sports a bold Bruce Mau-designed website, a stunning new monograph, projects like the Aqua Tower, and countless other accolades, none of it comes at the expense of the firm’s commitment to its community. And while Gang is clearly the driving force behind that commitment, her employees take on and treat their pro bono clients as any other firm would their most prized.

Two Studio Gang projects grace the pages of my recent book, The Power of Pro Bono, published last fall by Metropolis. (Gensler, the only other firm to have two projects featured, is upwards of 100 times larger than Studio Gang.) The first project is the Lavezzorio Community Center, home to SOS Children’s Villages of Illinois directed by McCormick; the second is a comparable center for the Chinese American Service League.

Formed from multi-tone concrete layers, the striking exterior of the Lavezzorio Community Center represents an innovation driven undeniably by the pro bono nature of the project. Studio Gang and the center originally secured a sizable donation of brick, which the firm incorporated into its design. As sometimes happens with such donations, the brick never materialized, challenging Gang to innovate with what it had and literally paving the way for the striking exposed concrete that we see today.

There’s no doubt how much Tim McCormick loves Gang’s design, windows and all. “On a day-to-day basis, it costs us more money to keep the many windows clean, but the windows echo a value of allowing people to feel safe—people who have been in very vulnerable situations,” McCormick explains. “The design gives our children a sense of emotional and physical safety through the openness the building provides. The community center towers above all the other homes in a very purposeful manner so that someone is always looking over the children. It is the eye of the village.”

While there have been 850  MacArthur Fellows since the establishment of the program in 1981, only a handful have been architects. One of 21 recipients this year, Gang can do anything she sees fit with the $500,000 prize, “no strings attached,” as the foundation says. No matter how she invests it personally, philanthropically, or into her practice (as she’s already indicated), it will ultimately support her community work and commitment to good design—everything does. and that’s the real genius of Jeanne Gang. She knows pro bono work is good for business, good for the community, and good for the soul.

John Cary is the editor of PublicInterestDesign.org and author of The Power of Pro Bono: 40 Stories about Design for the Public Good by Architects and Their Clients. He speaks widely on architecture, design, public service, and social justice.