David Sokol sits on one of the planters that run along Broadway between 35th and 34th Streets, a block recently closed to automobile traffic.

I’ll admit I was dubious when the gravelly painted areas popped up overnight around Broadway and 23rd Street last year. I was happy that the eight lanes of traffic that I frequently had to cross (but could never manage in one traffic light) were now down to five. But I had doubts about anyone wanting to sit in the middle of traffic. I was wrong. All summer long people gathered around the café tables, lounging just a planter away from speeding cars. So when I heard about the DOT closing sections of Broadway around Times Square and Herald Square, I was ready to celebrate. In fact, I asked writer David Sokol if we could meet in Herald Square so I could take it all in for myself. I had, prematurely, visions of Broadway as a grand pedestrian boulevard running the length of the city. But despite the weekend celebration with movies and beach chairs in Times Square, what we found at 35th Street today was just a road blocked off by traffic barrels. Instead we grabbed a spot in the preexisting pocket park, beneath a clock monument to James Gordon Bennett, where we could at least watch the activity, or what there was of it, on Broadway. Here’s the extent of the dialogue that the project inspired in its current incarnation:

Kristi: “Right now, it’s just about redirecting traffic. There’s no reason for people to be in the street. But first you have to claim the space, then you can convert it. People are at least using it to cross.”

David: “How people are walking in the street right now is exactly how they walk across the street here every day!” 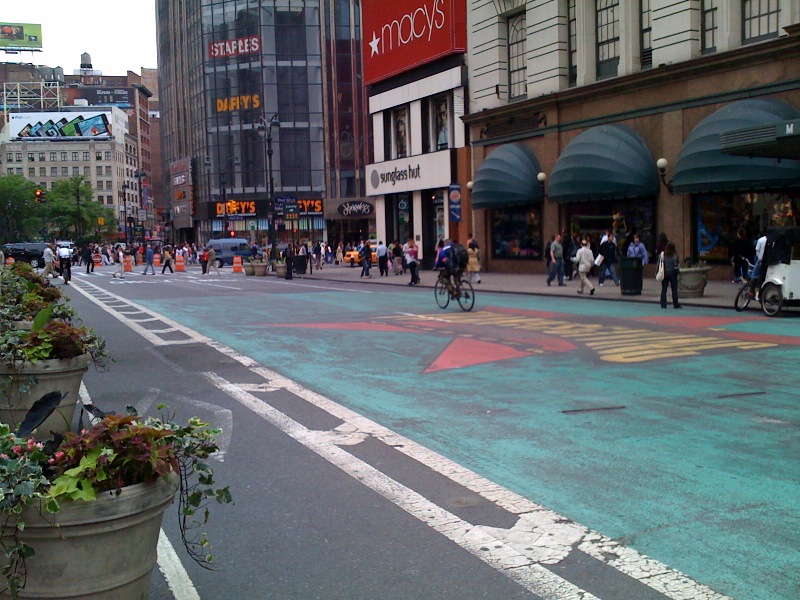 Closing the block to cars hasn’t given people much reason to occupy the street—but, as a traffic experiment, it may give the DOT the leverage it needs to turn this stretch of Broadway into a permanent pedestrian plaza.

Fair enough. What exists outside of Macy’s right now is tantamount to institutionalized jaywalking. But the simple fact that it exists at all is remarkable. I never thought I’d see the city’s vehicular aorta tampered with. Personally, I’m hoping that the temporary intervention succeeds and in December, when it is up for review, becomes a permanent feature of the landscape. And then I’m hoping for a few café tables.