Inside the Acropolis Museum

Our writer gets an exclusive tour of Bernard Tschumi’s long-awaited new museum.

After a nearly decade-long odyssey fraught with epic travails (including more than 100 lawsuits), the new Acropolis Museum finally opens to the public this Sunday. The imperious scale of the relatively austere concrete-and-glass building, designed by the Swiss architect Bernard Tschumi, reflects that of the Parthenon, which regards it from the rock of the Acropolis above. Although the museum’s shape was determined largely by the demanding constraints of the site—sandwiched between the Acropolis hill and a dense urban neighborhood, it has ancient excavations underneath, apartment blocks on one side, and 19th-century historical buildings on the other—the building succeeds thanks to its ghostlike neoclassical elements and miraculous transparency. Inside, massive columns evoke the grandiosity of a temple, while the airy, luminous exhibit halls breathe mesmerizing life into the freestanding statuary.

Last Sunday, I was lucky enough to get a tour of the museum from its president, Dimitrios Pandermalis, and the Greek minister of culture, Antonis Samaras. In the following excerpts from our talk, Pandermalis and Samaras discuss the museum’s design, its collection, and their hopes for the return of the Parthenon marbles. 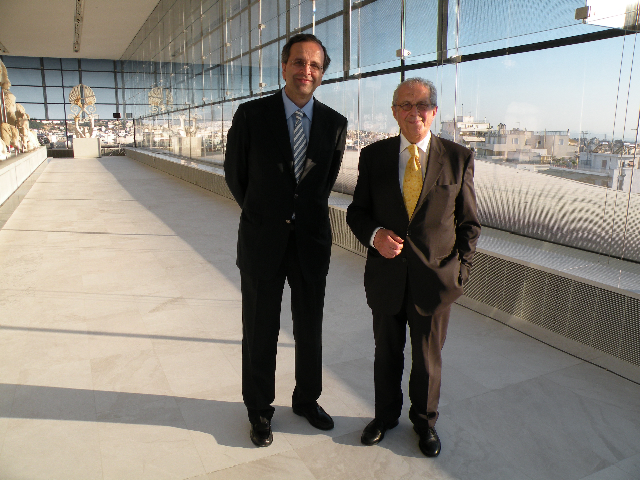 Dimitrios Pandermalis (right) begins the tour, graciously answering my questions as we tromp through the nearly empty museum.

Have you been involved in the project from the beginning?

Yes, I have been in charge of this project since 2000. They had failed three times to make the museum, and I started with the fourth competition. Before that, I was a professor of classical archaeology at the University of Thessaloniki, and I did a major excavation at the foothills of Mount Olympus.

I started with the international architectural competition, and construction was supposed to start in the year 2004. We had some problems with people who said it was not possible to construct a museum above the excavations. Finally we got the decision from the state courts to continue the work, so the building was constructed from 2005 to 2007. In 2008 we transported the exhibits from the museum on the rock of the Acropolis. 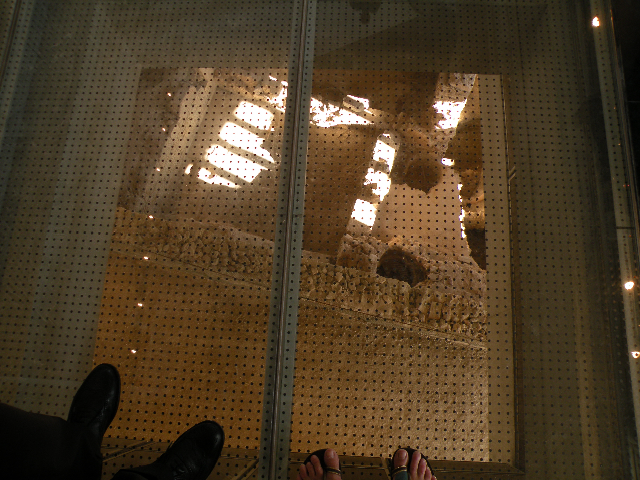 So the solution to the excavations was a glass floor that goes from transparent to opaque. What exactly is underneath?

Yes, because for some people it is a little irritating and scary. But you can walk on the opaque sides if you want. [Underneath] there are houses, workshops, and baths from the classical period of the fourth century BC to the seventh century AD. 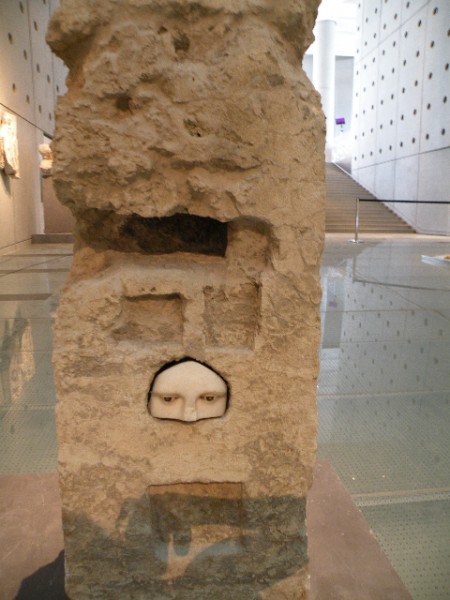 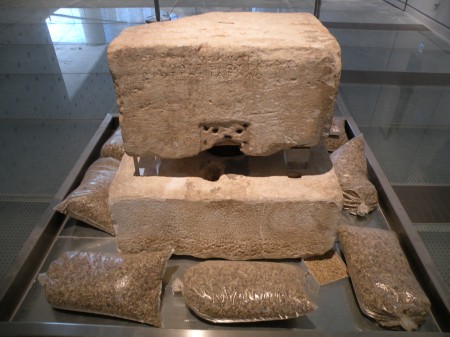 What are we looking at here?

[The item on the left] is from the sanctuary of Asclepius, fourth century BC—an excellent piece. This [the item on the right] is also interesting: for the goddess Aphrodite, they have to throw in a silver coin, which goes into the locked the chamber underneath, and the priests took it. It was an offering for the goddess for blessing their marriage. 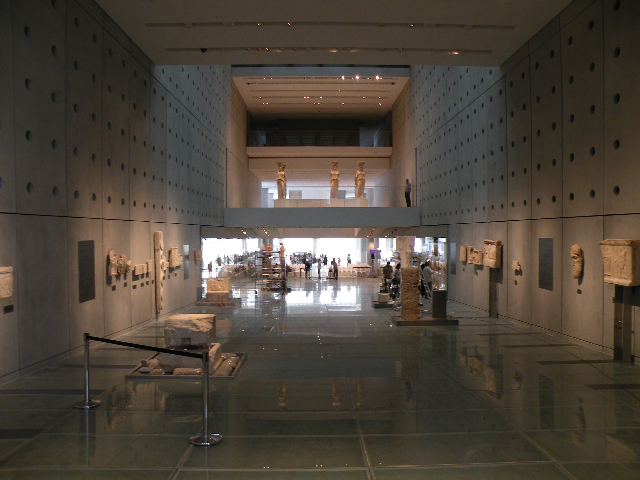 What is important in this museum is also that you can see from one end to the other, so there is interior transparency. You see here [on the balcony] the famous caryatids, which they used like columns for the porticoes of the temples. 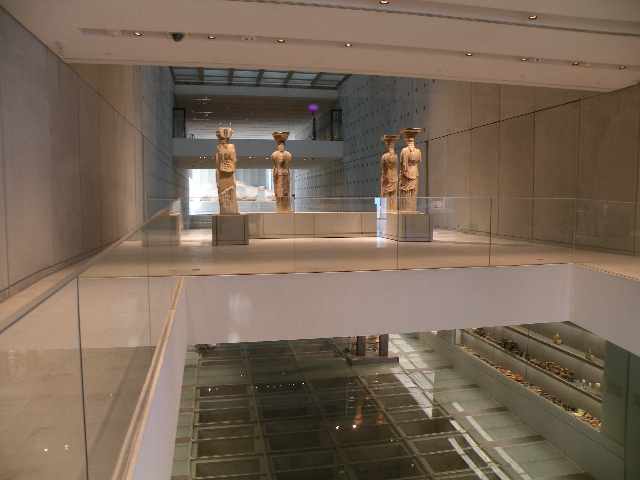 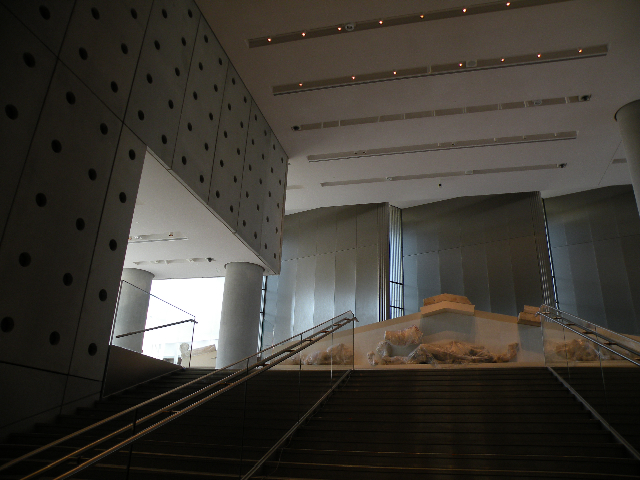 At the top of the stairs is a representation of the pediment of a temple, which was 150 years older than the Parthenon. 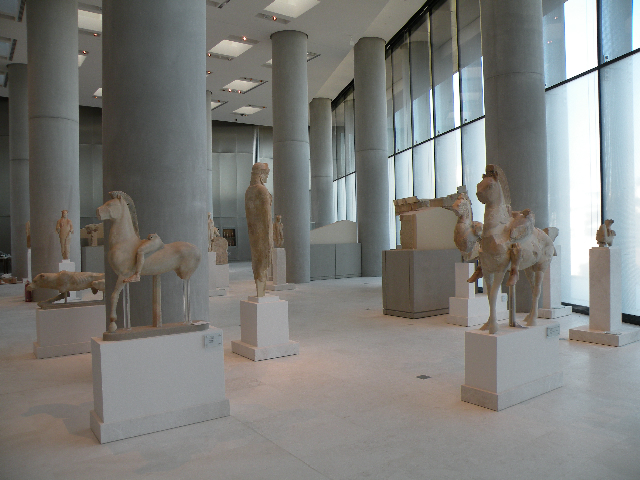 In this hall are statues, offerings, and dedications from the sixth century BC. At the moment we have the electric light on for experimentation, but we don’t need it. We have only a few freestanding showcases because we like to present the statues in the space without backgrounds. For the first time, you can go around them and see how beautiful they are from the back. And we have the richest collection of statues with painting on them in this collection. 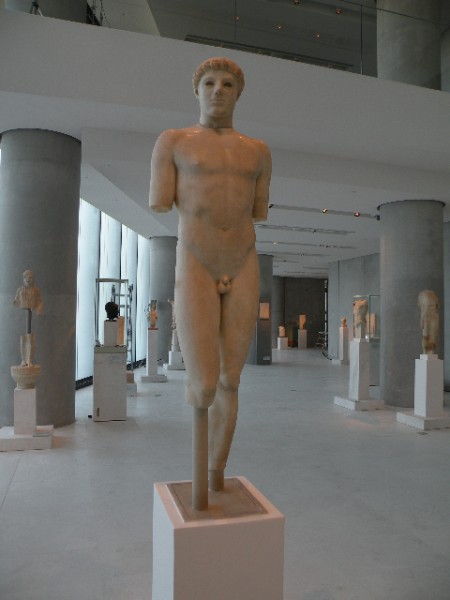 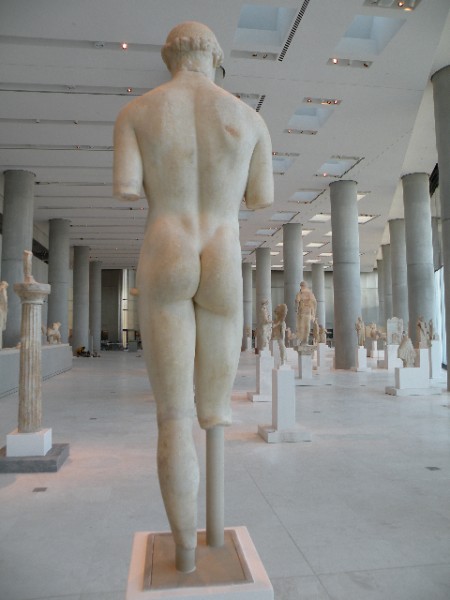 It feels like they are going to come alive—if you came here at night in the moonlight!

That’s true—they would start to walk. Here is a group of horses and horsemen. They were the statues of the nobles in Athens, very fine pieces; the surfaces are very fine and differentiated.

What we wanted is to give the idea of an ancient sanctuary, how it was, so there are many statues, mainly females, horses, a dog, and some male figures on the pediments. So it is one century of highlights of ancient Greek art. 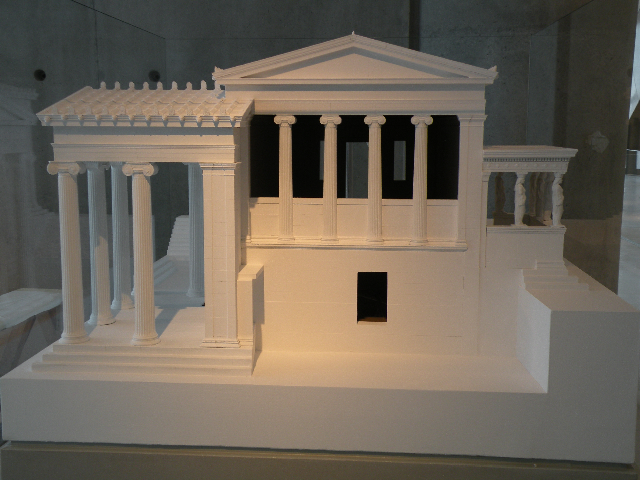 To make clear to the visitor every department of sculpture in combination with their original buildings, we have models. You see here in this case the temple with the caryatids in situ, which are used as support for the roof [at the right side of the model]. 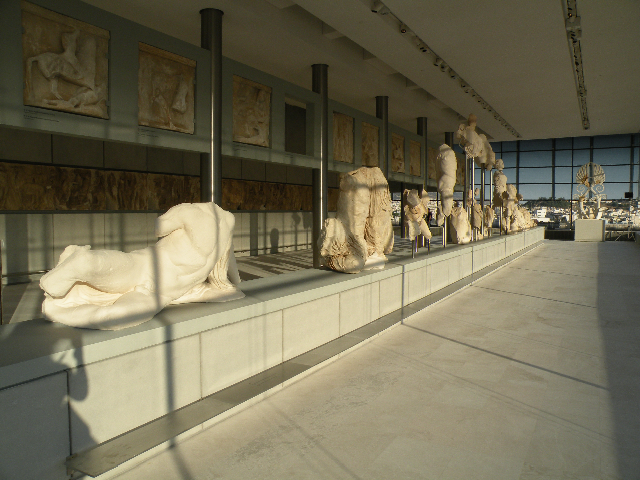 On the top floor, the Parthenon frieze is arranged on the walls, with the original slabs alternating with white plasters of the missing ones.

Our target was to give to the visitor an idea of how was the decoration of this temple. So here is the original frieze, the mantelpiece, and the pediment. If you stand here, you have an idea of the decoration of our temple. It is unique, presented in the same scale—this is the reason for the big museum. It’s really the whole temple, all of this. 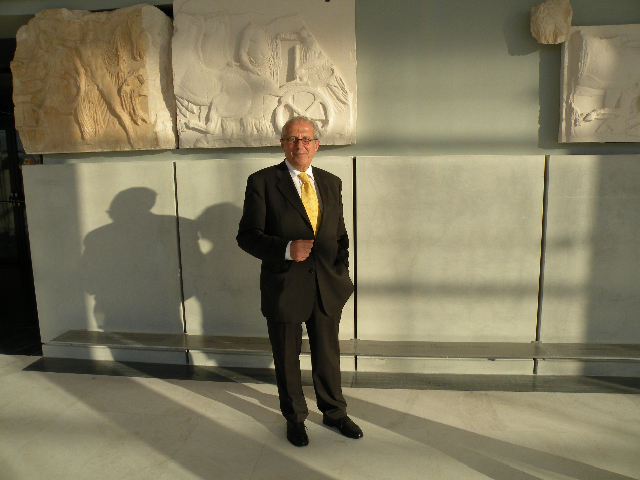 These are the marbles. [The tan sections are the originals; the white plaster sections are replicas of the marbles held at the British Museum.] You see with this horse, the rear legs are in London, and the front legs are here in Athens. It is split in half.

Speaking of which: What do you think are the chances of getting the marbles back?

Let’s see. I think the new museum will create a new dynamic—a pressure. We expect a new period of talks because now we have another basis for discussion. They will come.

Antonis Samaras, the Greek minister of culture, joins in.

What do you think about the building and its huge scale?

It’s not big at all: the scale is analogous to the Acropolis itself. It’s proportionate in the center. If you go around the frieze, for example, it’s 160 meters, just like the Acropolis, and the columns are 17. You have the same analogies, which is necessary to show something so you can see where it used to stand. And it could not have been done if the museum was smaller. There is so much to be seen here, in a modern way, which does not push you around. So I think this is something that is unprecedented.

What do you think about the issue of the return of the marbles?

First of all, what [we want is to] have an open, civilized discussion, and then see what can be done under certain conditions that are not as incredibly inelastic as the ones they put. They said, “We cannot bring you back those parts of the frieze as long as you do not recognize they are ours.” They want us to recognize that it is their property, so it would be as if we were to sanctify what Lord Elgin did 207 years ago. No Greek member of government can ever do that. And then they said we could have them for three months—you cannot even open the cartons. One has to be very correct and serious when talking about these things. We have said openly that we would be ready to provide them with all of the antiquities they need ad continuum. So they can have their scholars, teachers, and students see new and different things.

This is different because this is the very soul of Greek classics and antiquity. This is where all Western philosophy, ideologies, drama, and literature and poetry stem from. This is why you have seen 25 different organizations for the return of the marbles exist in different parts of the world. It is unique—it is a descriptive narrative, you cannot just cut it. You cannot have a family picture with something missing. So I think there is going to be world pressure for its reunification. As I told someone, I think the writing is on the frieze. 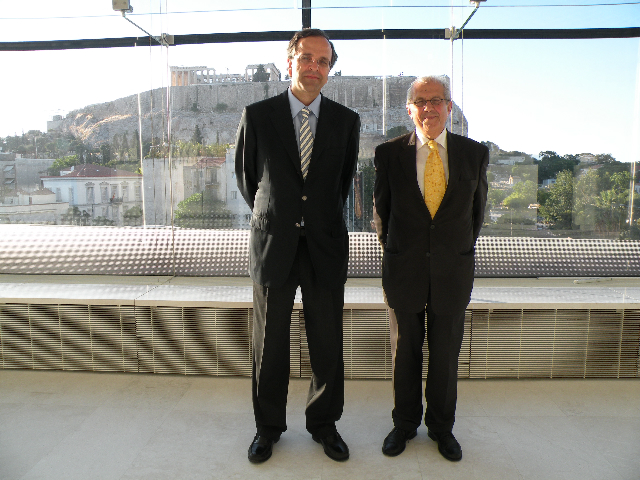