Despite Google Maps’ dominance, an MIT researcher continues to refine his own interactive mapping software.

A Cartagen map of Berlin, color-coded by the users who submitted map data. (Click to view a larger image.)

Scarcely a week goes by without an excited report on Google Maps: the breadth and depth of its coverage, its multiplying features, and all the innovative uses people are finding for it. But could the ubiquitous program be stunting the field of map design?

“Before Google Maps, designers thought much more broadly about what maps could do,” the MIT researcher Jeffrey Warren says. “Now, most mapping on the Web consists just of using Google Maps and sticking pins on it.” In the name of reclaiming some of that creativity, he’s created a software platform called Cartagen, the latest version of which debuted last week. It uses Google’s geographic data as a starting point, but lets people choose which features to include on their maps–streets, parks, churches, and so on–and how to visually represent those features, creating their maps from the ground up. Users can also add new data, which Cartagen can represent not just as points on the map but as outlines, polygons, overlapping shaded clouds–the possibilities are still expanding as Warren’s team brainstorms new potential uses for its creation.

Cartagen’s biggest departure from the Google Maps model is its interactivity. “One thing Google Maps is not good at doing is representing changing data sets,” Warren says. By contrast, Cartagen’s maps are updated instantly as people text in information about their environments. In one pilot version of the program, he and his team invited users to report sightings of urban wildlife, resulting in a real-time map of the concentrations and movements of New York’s birds, bats, and rats. A subsequent pilot took advantage of the annual Harvard-Yale football game to experiment with ways of mapping political conflicts. With the Yale and Harvard crowds staking out different areas in local bars and in the stadium on game weekend, Cartagen translated fans’ self-reported locations and times into fluctuating spheres of red Harvard territory and blue Yale territory. 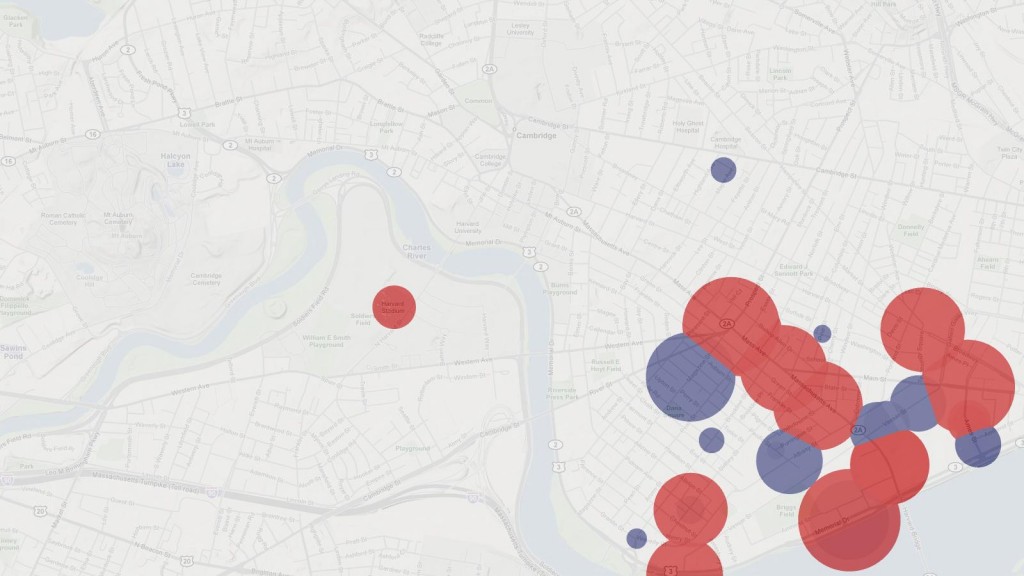 Top: A Cartagen map of Boston streets, color-coded according to the intensity of traffic. Bottom: A pilot-program map of Cambridge, Massachusetts, showing red Harvard and blue Yale territories. (Click the maps to view larger images.)

Crowdsourcing isn’t just a means to an end for the Cartagen team, Warren emphasizes. It’s an end in itself, a way of spurring people to actively engage with their environments, and a reminder of the inevitable subjectivity of map design. Even the most ostensibly objective maps are shaped by a series of judgments: what to include, what to exclude, what to highlight.

Warren is also also hoping that the development of Cartagen will have a positive influence on how the booming field of data mining evolves. “There are people who are paranoid that real-time mapping will be an invasion of privacy, and rightfully so,” he says. “You can’t just stick your head in the sand. But by taking an active role in developing these technologies, we can push them in a better direction–towards being a tool for individuals, and away from being a tool to increase power for corporations.”