Q&A: Making Expressive and Flexible Spaces for Healthcare and Education

As part of the Metropolis Think Tank series, Susan S. Szenasy arrived in the New York office of Perkins Eastman to discuss lessons learned from their projects. 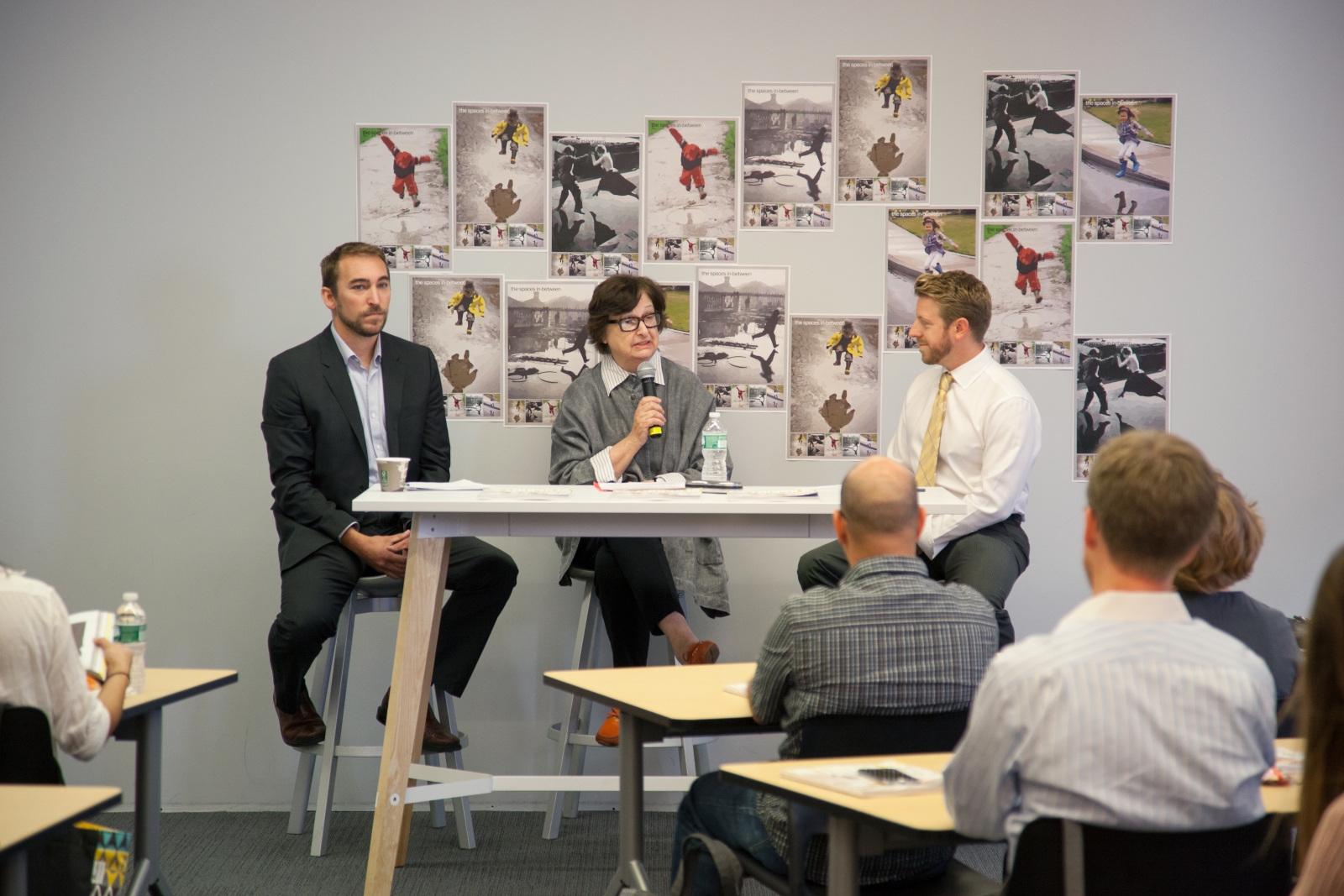 On September 24, 2015, Susan S. Szenasy, Metropolis publisher and editor in chief, arrived in the New York City office of Perkins Eastman as part of the Metropolis Think Tank series to discuss with the principals insights into making expressive and flexible healthcare and education spaces, as well as how cities might grow around these spaces. This ongoing series of conversations with a focus on human-centered design continues to take place in select architecture and design offices around the United States. What follows is an edited transcript of the conversation, prepared by Dora Vanette.

Square Footage Versus Intuitive Use of Space

Susan S. Szenasy (SSS), Metropolis: On a very superficial level, health-care design has been taking its cues from hospitality, while schools have been taking on the workplace. You are working to evaluate how a deep interest in the human experience needs to be behind everything you do. How do you approach this?

Evan Weremeychik (EW), principal, Perkins Eastman New York: First, I want to talk about some of the roadblocks we face, mainly that clients, who are paying for each square foot, are always looking for efficiency. What we want to do is create square footage that has flexibility and adaptability. We’re also up against the traditional mentality of what a space is and what it does, and of associating a space with a particular function. We’re trying to get clients to see that space can be created to serve multiple functions.

One way we get over those hurdles is to bring in the younger generation, which is moving into leadership positions much faster than some of the baby boomers did. We need to get them to understand that we’re designing a building for the long term, and it needs to serve their current and future needs as well as pay attention to the ideas and preconceptions of older generations. We push forward the concept that efficiency isn’t just about each square foot having a function, but being able to use the space in many different ways—for instance, carve out areas in corridors for impromptu meetings. This can free up conference rooms for meetings that need a formal environment. There’s a level of efficiency that’s hard to quantify in terms of dollars per square foot, but it’s about the experience of the space, its intuitive use. 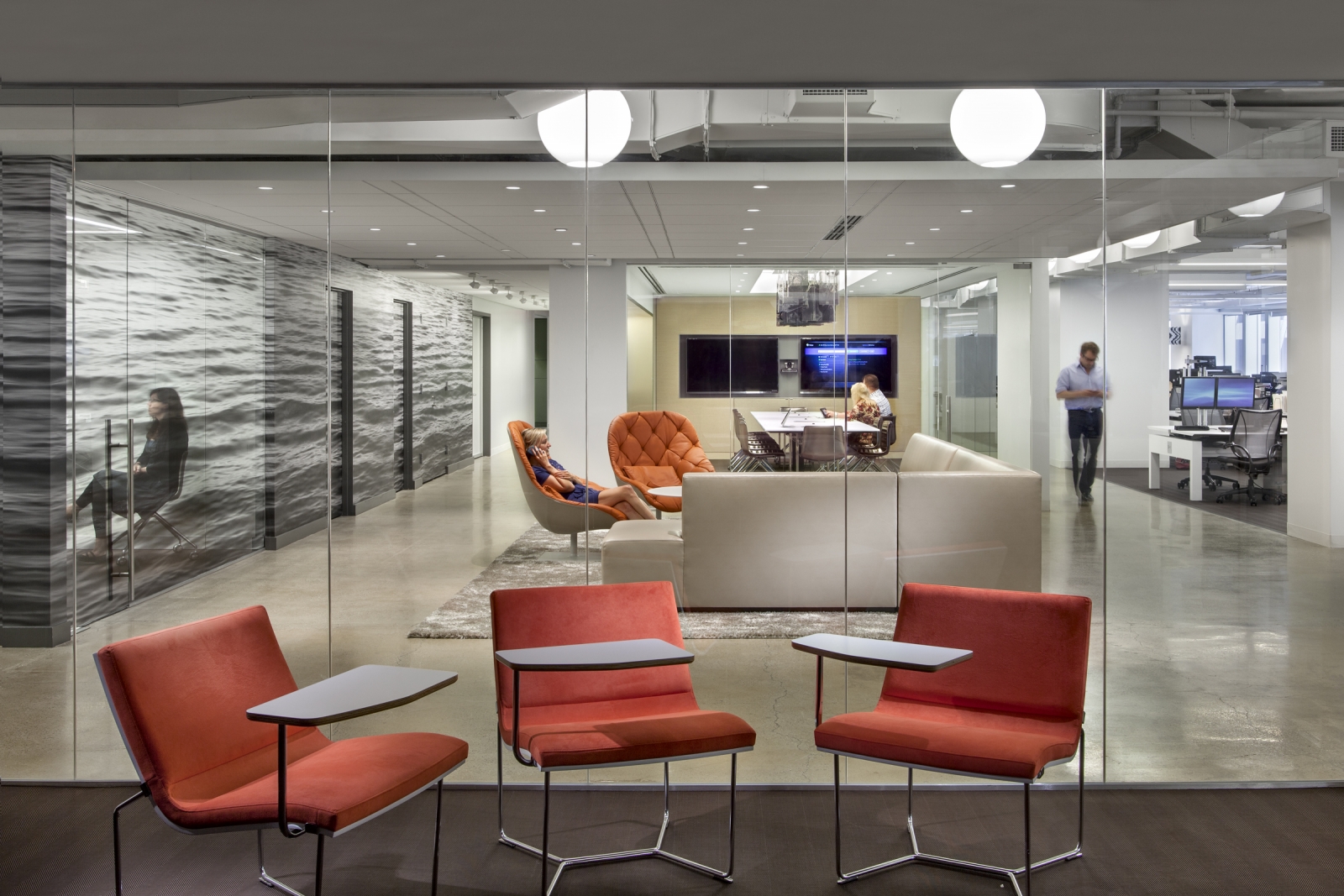 At the BBC Worldwide Americas headquarters in New York City, Perkins Eastman programmed and designed collaborative breakout space: semi-enclosed pods to provide some visual privacy between meeting groups, and lounge furniture to promote both formal and casual interactions.We don’t try to make our health-care institution lobbies look like hotel lobbies. What we try to do is focus on the human experience, how a space makes people feel and what we can do to make spaces more intuitive and comforting, to evoke positive rather than negative emotions that can be affiliated with certain spaces, such as those designated for health care.

SSS: How do you deal with issues that are essential to our human condition, such as natural light?

EW: For so long, we were forced to fit ourselves into the mold of our environments. We made people stay at work for 12 hours to get 12 hours of work out of them. The model now, whether it’s the workplace or the school or something else, is to try to think about the way humans actually work and design environments they would actually want to be in. Then they’ll be more satisfied and more productive.

Openness and materials play a large part as well. I had an opportunity to build an office two floors underground. It’s a huge challenge to make people unconscious of the fact that they’re so far underground. In some areas, we had really high ceilings, which was beneficial, but we also did a lot of glass partitioning. The material and the lighting played a huge role in setting the mood of the environment. And we actually put in a massive projection screen and a live webcam to Times Square, so people knew what the weather was like outside. I think those little technological or material touches play a role in making us comfortable. 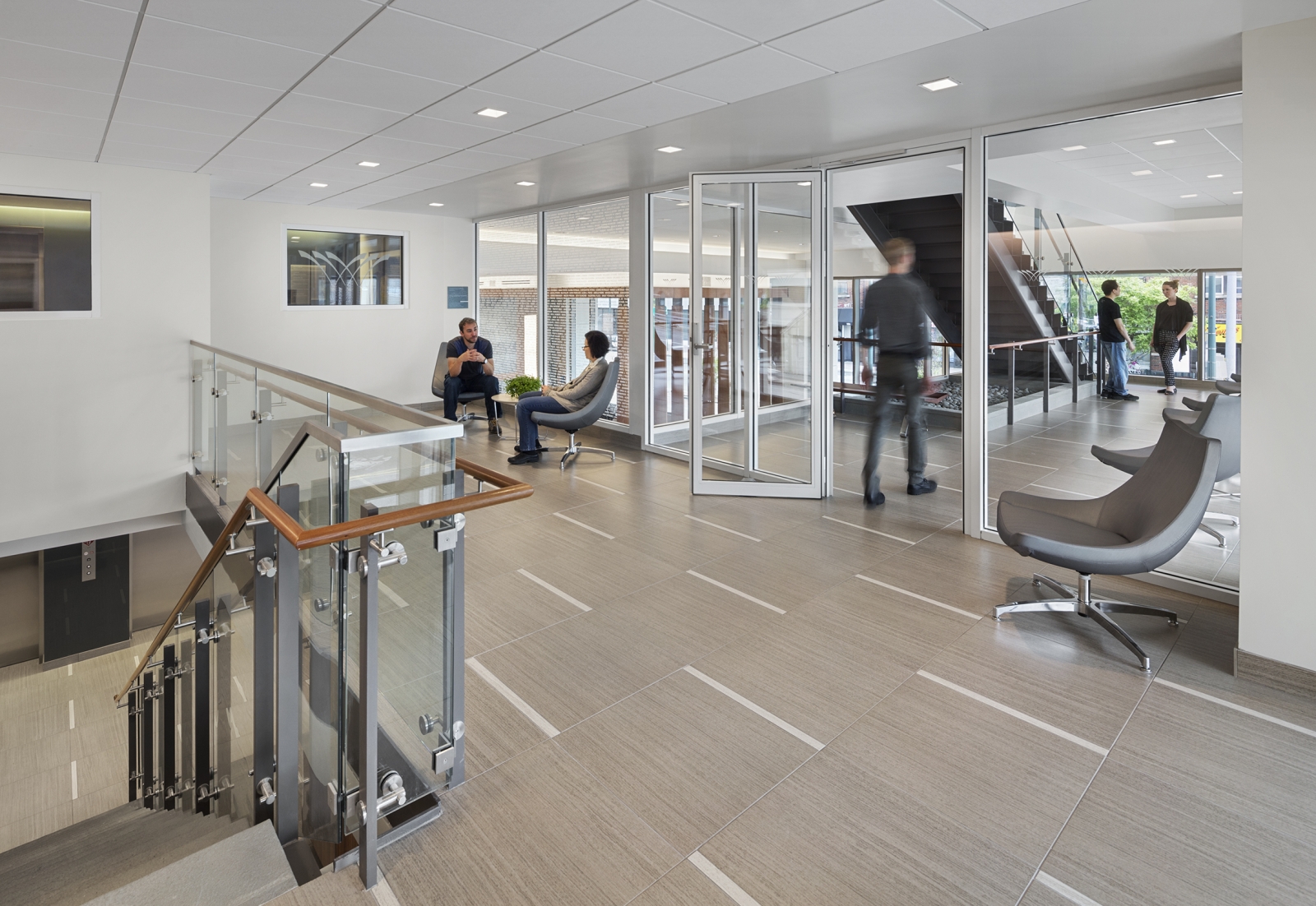 At the Research and Academic Center at Winthrop-University Hospital, the large open circulation stair, infused with small conversation zones, connects the ground floor education and community outreach functions with the upper floors while visibly promoting the interactive and health-oriented mission of this translational environment.

SSS: How do you approach your school clients? What kind of complexity are you confronted with when designing 21st-century schools?

David Levo (DL), principal, Perkins Eastman New York: Back in the 1970s, classrooms were designed around the idea that we didn’t want to have a lot of windows because we wanted students to focus. As it turned out, this complete lack of stimulus wasn’t good. Everybody daydreams, whether you’re in primary school or in the office. We need to be able to step out of the moment, look out the window, see something rewarding, and recharge.

Furniture companies have been doing a great job understanding some common issues too. We’ve had such a problem with ADHD and restless kids who fidget. But if we put a kid into a swivel chair or a chair on rollers, that little amount of caloric action is a tremendous help in getting kids to focus. This small detail is a huge change. It also requires more square footage in classrooms.

The other thing is technology. In all platforms, there is a need to create spaces that reflect the human condition in this digital age. Just think, 15 years from now, the generation entering college age will have been born after the iPhone.

Christine Schlendorf (CS), Principal and Director, Perkins Eastman New York: By the time they’re five years old, today’s children know how to use technology. We used to respond to this digitizing trend by saying, “No, no, those kids should be playing with blocks instead,” and, in fact, we still do. We’re still zoning kindergarten classrooms. But one of those zones is now connected to technology.

DL: When we think about how kids are developing, there’s a strong chance that 10 to 15 years from now, our traditional sense of space will have broken down. In the near future, students might be advancing less according to how many times they’ve been around the sun and more in terms of whether they’re really good at geometry, or not so great at chemistry.

EW: Lessons today can now happen at home, whether it’s a YouTube video or something else, and the activity that we used to think of as homework now happens in the classroom, with the teacher guiding each student at their own level of progress. I think technology and the way we’re educating our students is affecting the way we’re thinking about the environments we put around them.

DL: At the university level, too, classrooms are being designed around students and around a multigenerational faculty. There is a tremendous divergence in skill sets as you go from young faculty to faculty nearing retirement. The classrooms we’re designing have to be able to function in many ways; managing technology budgets is a big part of it. We’re finding that schools need fewer classrooms because so much learning is happening informally. We’re working with teachers to change pedagogy as well as understand developmental policies in institutions.

Getting back to this humanist idea, our society is having conversations about inequality and meritocracy, the divergence between the well-off and those who are coming from less fortunate backgrounds. This requires more responsibility from us, and design has an important role in this dialogue, particularly in how we understand the different kinds of challenges people are facing.

DL: We’re in the process of rethinking Rochester, Minnesota, as a city. Mayo Clinic is the economic driver and major employer of this midsize city; it can attract talent for a couple of years, but can’t keep it. So we’re setting a new focal point for the city. Discovery Square, for example, will be the focal point for Mayo’s expansion of its science and technology institutes, anchoring research buildings, hotels, green space, and new mixed-use development, all of which will bring in diversity of activity and create a spot where people can bump into each other. 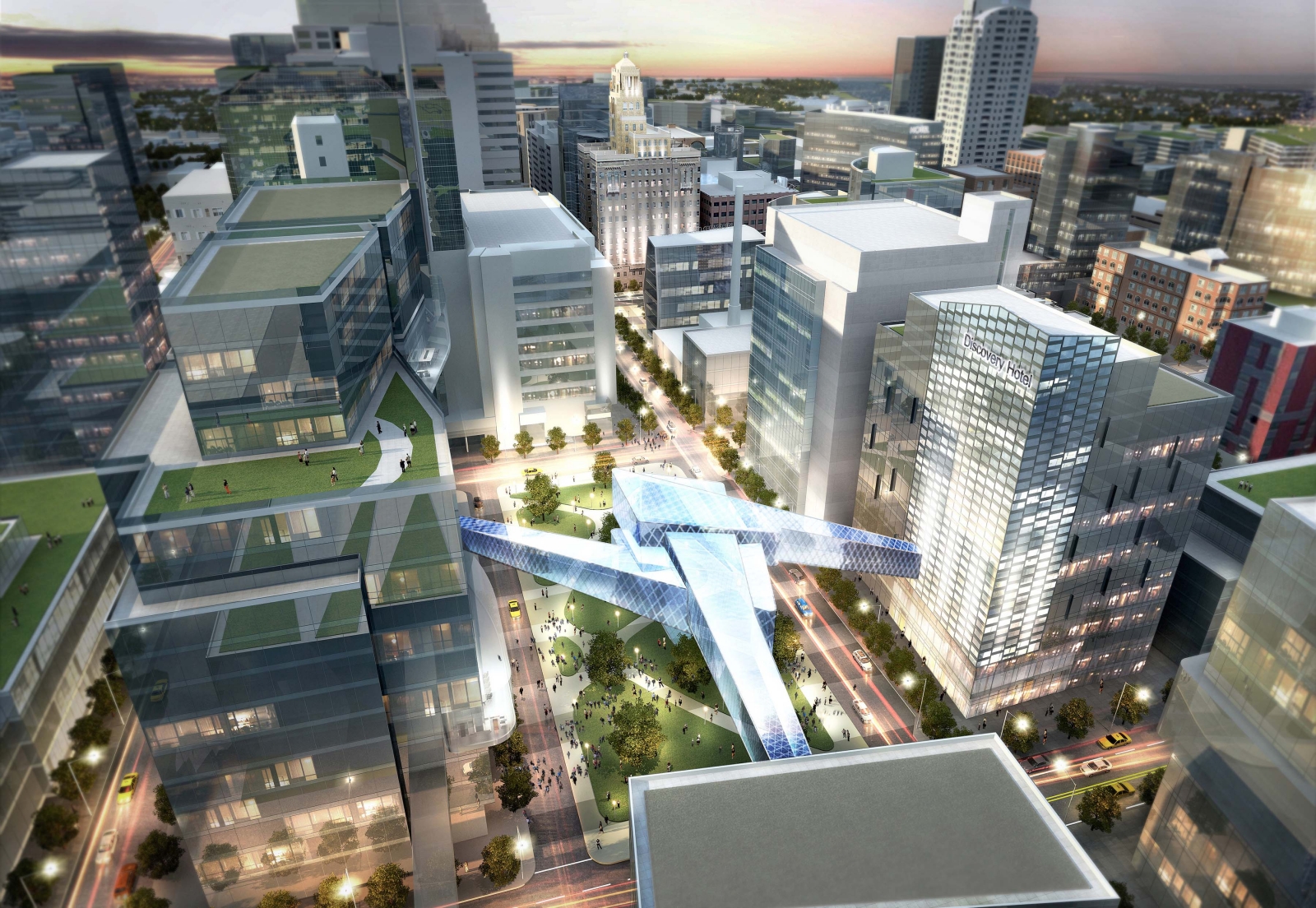 As the focal point of Perkins Eastman’s plan for Mayo Clinic in Rochester, Discovery Square is sited to take advantage of its proximity to downtown and to provide interconnected indoor and outdoor meeting places that function as centralized gathering spots for visitors, scientists, researchers, and the medical community to comingle and collaborate.

EW: This is a great example of architecture responding to reality instead of creating a reality. When you’re in a hospital, for instance, you want your family to visit, stay in a nearby hotel, and find interesting places to visit. In labs, the program has changed dramatically since 1990. Now we don’t do fixed casework and furniture. The amount of open lab bench space has decreased by two-thirds, and labs today have a lot more office space to accommodate number crunching. So we see a huge growth in office space and a shrinking of the lab areas. In addition, specialty supportive equipment, like for DNA sequencing, takes up a lot of space. We’ve learned that anything that once had to be fixed and solid, shouldn’t be. We try to think about openness, adaptability, and future use.

SSS: What you’re doing is human-centered design, making space for communities where people can understand their surroundings without an architect explaining what they’re experiencing.