For all 9/11’s iconoclasm and upheaval and upset, it has produced surprising little innovation in memorials.  A remarkable number and variety of memorials have been made in the ten years that have since passed.  They demonstrate the deep importance of memorials as part of our everyday landscape, and a renewed interest in the process of […]

For all 9/11’s iconoclasm and upheaval and upset, it has produced surprising little innovation in memorials.  A remarkable number and variety of memorials have been made in the ten years that have since passed.  They demonstrate the deep importance of memorials as part of our everyday landscape, and a renewed interest in the process of memorializing.  We have all been engaged by the thousands of popular memorials, and also by the emergence of the official memorials at the WTC site, in Shanksville, at the Pentagon.  This proliferation, instead of fueling innovative approaches, though, has reinforced the already divergent, pre-2001 memorial culture.

Sometime late in the 20th century, memorial strategies diverged.  The ephemeral, popular memorial, a radically contingent foil to old bronze-and-stone memorials, took on new prominence.  “Ephemeral memorial” seems like an oxymoron at first—memorials should be designed to endure, not fade away, right?  The are not only legitimate but stand as radical challenges to traditional memorial culture of bronze and stone.  Examples included the many self-made memorials created in the aftermath of 9/11, in parks, on walls, along sidewalks, pretty much anywhere in public space.

Add to these roadside memorials, ghost bikes, and other “leavings” at disaster sites or conventional memorials.  One of the labels applied to them—makeshift—captures their provisional, temporary nature as well as the urgency and hand-made qualities that leave them both admired and reviled.  The point of ephemeral memorials is immediacy and imageability, not materiality, formal excellence, and permanence.  They expand the notion of what counts as a legitimate memorial and suggest a broadening in the kinds of memorials accepted today as part of a larger landscape—a memorial infrastructure. They make the process of memorialization more immediate for more people.  People want to see their own hand; however fleeting, they want evidence of their own remembering and forgetting.

On the other hand is the official memorial—figurative statues, pedestals, columns or obelisks. Presenting supposedly consensus meanings about events of public importance, official memorials sometimes trade in the timeworn design language of stone and metal artworks set in conspicuous public spaces.  Just as important, official memorials rely on essential, universal symbols built for permanence—not only pillars of stone, but the use of water, as at the WTC tower footprints. 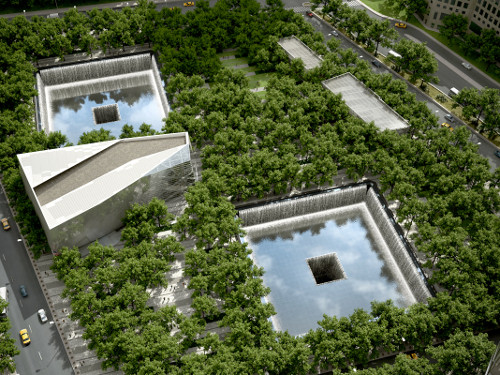 In neither case did 9/11 create these design strategies, nor even change them significantly.  (There have been exceptions, of course—the Towers of Light, the series of short biographies published in the daily New York Times, the scratches preserved in the pews of St. Paul’s Chapel, stand out deeply thoughtful and subtly innovative memorials.) The intensity of memorial making after 9/11 sharpened the divide between the ephemeral and popular, and the official and (more) permanent. Most memorials created in 9/11’s wake seem very familiar because they draw on established tropes—they owe their resonance to such familiarity.

Popular memorials have been around for quite a while—even the “makeshift” paper/flower/candle/teddybear sort that became a truly mass phenomenon by the late 1990s.  Official memorials envisioned by professional designers have a history stretching back centuries and seem to evolve conservatively, seldom dramatically.

It’s important not to interpret this divide as requiring a false choice.  What’s significant is that the cultural landscape of memorials encompasses both (all) kinds of memorials, representing by its diversity and changefulness a robust culture of marking time.  Some see the proliferation of memorials as a sign of weakness (the many self-made memorials left at tragedy sites are regarded as messy, hasty, undesigned, kneejerk reactions). Others, myself included, regard the variety and proliferation of memorials as a sign of strength and engagement (a robust culture dealing with a difficult history in appropriately cacophonous, chaotic ways). The open-endedness and deterioration of popular memorials reflects an honesty missing in the overwrought messages of official memorials.  The radical idea that memorials can fade just like our memories do—opposing the traditional idea of a memorial as something resistant to duration and decay—makes for an appropriately contentious display.

Even if the form of popular and official memorials is not so new, what has changed dramatically is the process of creating and interpreting memorials. The public visits and criticizes and talks about public memorials more than ever.  We also engage memorials far more as individuals—visiting them if not making them—without losing hold of the notion that memorials are meant to express and enforce collective notions of memory and cultural significance.

The result is that we think of memorialization as much as a social phenomenon and political arena, not strictly as an art form or scholarly arcana. Memorialization has become more gregarious, less dominated by a rarified, closed elite. In light of this more open process, the form and design of memorials (however innovative or traditional) are more likely to challenge us to think about larger issues—of meaning and remembrance, as well as political questions about who makes and decides about memorials, how are they received or interpreted, where are they placed, and how they should embrace or resist change.  To the extent that this opens up critical reflections on what the past means for us today, these are very positive developments.

In dramatic contrast to the immediacy of ephemeral, popular memorials, the new memorial at the World Trade Center site exemplifies an opposite and equally powerful pillar of our memorial culture—the appeal of “essential” elements like footprints and the gravity of stone and water features set in dramatic, specially designed public spaces.

In the aftermath of the World Trade Center attacks, the concerned public searched clumsily for some shared understanding of what to do next; some combination of rebuilding and memorialization, to be sure.  But among the thousands who were personally affected, professionally engaged, or otherwise genuinely concerned about the shape and meaning of downtown’s future, we shared few, specific notions about how to manage or mark this deeply significant urban landscape.  Proposed designs ranged from the absurd to the brilliant. They included megastructures, literal reconstructions, and every fashion of architectural innovation.  Perhaps the one shared, abiding idea about the memorial is that the footprints of the two main WTC towers should somehow be preserved as a memorial. (And secondarily, that water somehow should play in to the memorial experience.)  What is it about the footprints that makes them compelling almost universally, whereas we argue about nearly every other aspect of memorialization?

Footprints are akin to what the art historian George Kubler called “prime objects”—a basic means, or symbol, of human communication.  Like prime numbers, Kubler explained in his classic The Shape of Time, “Prime numbers have no divisors other than themselves and unity; prime objects likewise resist decomposition in being original entities.” The idea of footprints as universally meaningful forms flies in the face of current theories of history, memory, and cultural process, which point to the conclusion that universally-held cultural meanings—ideas or values shared by humans of any culture—are chimerical, lead us down the garden path, or worse, are repressive devices for imposing norms.  This is not to argue that the meaning of footprints is identical across cultures or individuals, but footprints are meaningful across different cultures and individual experiences.

Footprints are unmistakably authentic traces of something gone missing—our infant’s foot, since grown up; a hominid’s track made thousands of year’s ago, across an African grassland; or cave-wall pictographs outlining the shape of a human hand.  In the case of the WTC memorial the authentic traces have to be reconstructed—literally, they don’t exist any longer—but they satisfy us as authentic as long as they are re-mapped in situ. They retain a capacity to represent shared memories across cultures. They actually abide by another persuasive design theory—valuing layers of meaning, and the flux and changeability of history, as opposed to freezing one particular moment in time.  And, key to the urbanist concerns, footprints-as-memorial allows flexibility in reconfiguring the site. They create a scaffolding to build our individual and shared meanings of the site, without prescribing what the meaning should be.

So it’s no surprise that the tower footprints have provided some common ground.  As expressions of human presence and historical memory, footprints have a particular power and they are traditional memorials in the sense of their permanence and materiality.  Can they live alongside the highly situational expressions of public memorializing like ephemeral memorials?  This will be an ongoing tension.  Despite the obvious popularity and power of popular memorials as part of the public response to 9/11, official stewards have resisted their inclusion in “official” memorials.  Remember the signs on the fences around Ground Zero forbidding the leaving of any personal memorial? How this impulse will be accommodated in the new memorial will matter.

The hubris of official memorial designers should not be so great as to believe that every aspect of remembering at the site can or should be choreographed. To exclude informal memorials from the scene, risks over-editing the wonderful, sometimes bizarre or banal, genuine range of responses to tragedies.

Ephemeral memorials and footprints both mark our humanity directly–one via essential forms, the other via quick decay, disposability, and continual reappearance.  Both are honest aspirations marking the passage of time, expressing human feeling as material culture, though of diametrically opposite design strategy and via different social processes. Both are legitimate parts of our new memorial landscape, which does and should represent American culture and politics in all its contradictory, sometimes nonsensical, sometimes brilliant, often poignant splendor.

In the end, the new memorial landscape—and the ways in which it represents nothing new—marks the resilience commentators are fawning over these days.  While recent memorials may not represent deep, critical exploration of 9/11’s meaning—we have years to work on that—they are healthy signs of a more gregarious engagement with the past in public space.  And the ephemera and prime object memorials of our time reflect the vexing nature of memorials, which we require to both change with, and resist, time.