Public Forums to Save Coney Island

Developers are chomping at the bit as New York City moves closer to finalizing rezoning Coney Island. But before irreversible changes can occur in our funhouse district, the Municipal Art Society (MAS) is calling on citizens and experts to Imagine Coney, promoting the neighborhood’s “honky tonk discovery quality” lest the area become culturally bland in the name of progress.

The timing is urgent and MAS has mobilized to create a charette for Coney Island redevelopment with top thinkers on architecture, amusement design, and economics. Invested with the power of good design, forward thinking on development, and grassroots yearning to protect a one-of-a-kind historical core, the group hopes to leverage growth in the right direction.

They’ll be facing an uphill battle against development that would rather do things the easy way. It’s clear that money can be made on a standard residential and retail model. Capitalizing on experience and dream for the masses takes more faith, but the entertainment barons of old Coney Island proved time and again the impossible can be done. “Coney Island needs to bring out the New Yorkers and then the tourists will come” says MAS Senior Policy Analyst Jasper Goldman. In today’s world of unstable gas prices “people are doing the staycation. It’s a good time to reinvent urban entertainment.”

On October 27th MAS hosted a public briefing session to get the charette members up to speed. There’s a thrilling amount of information. A few highlights of the morning-long session included a presentation of the city’s rezoning plan, a refutation of that plan by Coney Island USA representative Dick Zigun, appeals from community activists not to forget that its not all fun and games since people in need of services actually live out there, an explanation from land-owner Taconic Investment that envisions best use through residential and retail development, some spiffy renderings of Grimshaw’s plan for a new modular band shell at Asser Levy Park, and an inspiring historical slide show of Coney Island’s majestic days of yore. 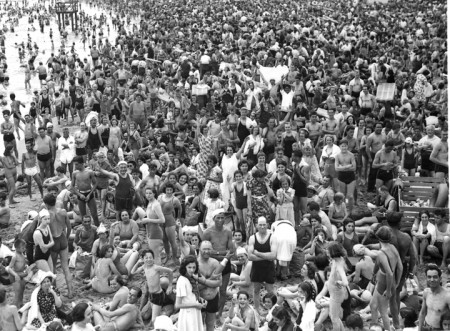 Coney Island is famous for its hordes of summer revelers through the ages.
(Photo: Charles Denson Archive)

If your head isn’t spinning yet, take a trip down and see for yourself. It’s not as you might remember. Things are always quieter there in the cooler months, and most recently Astroland has shut down for good-sold to a developer apparently named for the Norse god of thunder for $30 million. But it’s not completely over yet. Historic favorites like the Cyclone and the Wonder Wheel are landmarked and standing strong, and not-for-profit arts organization Coney Island USA has just opened the remodeled Freak Bar. 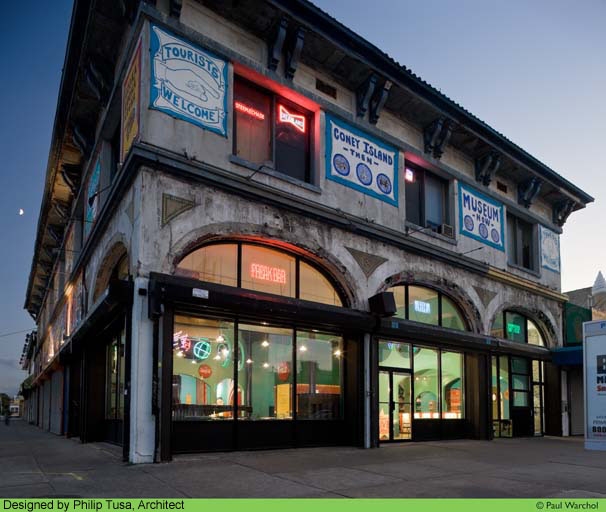 The Freak Bar in the Child’s Surf Avenue Restaurant historic building was recently remodeled by architect Philip Tusa. The bar aims to offer a year round destination at Coney Island and is the entry point for the Coney Island Museum upstairs.

Throw in your own two cents on keeping Coney Island in the hands of lovers and dreamers at one of MAS’s two public forums taking place on November 10 and November 12 or online at imagineconey.com. The design charette will take place November 13-14 with results announced November 17.