Q&A: A Brief History of Dutch Dikes and Polders

In developing ideas for the What’s Next issue, we had a rather logical thought. The subject was “Landscape/Climate Change”–and the thought? We need to talk to a Dutchmen about this, for fairly obvious reasons. So we contacted Jan H. de Jager, a civil engineer and an expert on dikes and dams, who in the course […]

In developing ideas for the What’s Next issue, we had a rather logical thought. The subject was “Landscape/Climate Change”–and the thought? We need to talk to a Dutchmen about this, for fairly obvious reasons. So we contacted Jan H. de Jager, a civil engineer and an expert on dikes and dams, who in the course of our conversation gave us a primer on the Dutch ways with water.
.

Tell us how the Dutch approach the problem of rising sea levels. They’ve been at this for thousands of years.

Our coast is very soft and sandy, with a number of major rivers crossing into the North Sea. The country was actually formed by these rivers over the last one or two hundred thousand years. It’s a country built on sediments, which were brought in by the Rhine River. A couple hundred thousand years ago we didn’t even exist. Our ancestors have dealt with sea level rises in the past. And they had only modest means, so what they did was build little platforms, plateaus, where they built up their farms and houses. So when sea water would rise, they would run to their earth plateau and sit out the high water.

When the country got more inhabited, and now I’m talking about two thousand years ago, these practices were still in use. About one thousand years ago the population increased to such an extent that the people felt that we had to organize things. The water boards were an early form of democracy. Our oldest water boards’ [jurisdictions] are over one thousand years old. They choose a chairman and a secretary. All the people living in a certain area had to contribute to the water board, whether in money or manual labor, or horses or cows to transport earth. And then we started to build dikes. Not the same sort of thing we consider a dike now. These were earth berms, which were extended over many kilometers to fend off possible high waters. The water boards evolved over the years. In the early days, there may have been one thousand water boards, in a country the size of Maryland. But up to sixty percent of the country is below the current mean sea level, which means most of the country is still being protected by dikes. The number of water boards has decreased. We now have less than one hundred, which is cheaper and easier to manage. People don’t supply the labor anymore. They just pay a bill every month. The inhabitants pay according to the size of land they own and the properties built on it.

That’s how they maintain the dikes?

Yes. And to maintain the water levels, because precipitation falls into these polders behind the dikes and we have to pump it out. We also have water seeping in from underneath the dikes that has to be pumped out. All those costs are borne by the water boards but paid for by the inhabitants of the area.

It’s a kind of property tax. On top of the water-board tax, we still have property tax. We now have a situation where the largest parts of our economy are located below sea level, so protecting that is quite important. As you may remember, we had a big flood in the early 1950s in the southern part of our delta. We had beautiful estuaries there, but that made parts of the countryside vulnerable to storms and high water. So in 1953 there was an unusual storm with the winds changing from southwest to northwest in twenty-four hours. The dikes broke, the land was inundated, and one thousand eight hundred and fifty people lost their lives. A couple of years later, we passed the Delta Law. It authorized the government to built storm-surge barriers and dams to block these estuaries. By 1958, we started to build all kinds of barriers. But during the 1970s, environmental thinking developed. People became concerned that blocking off these estuaries would kill the marine life behind them, which is true. Instead of building completely closed ones, we started to build storm-surge barriers which make it possible for the water to come in with high tide and go out with low. We maintain the marine life in those estuaries, but if a big storm develops, we close the gates and remain safe behind the dam. And we’ve taken that thinking further. The standard rule of our ministry of dikes and waterways is to protect our coast as much as possible in an environmentally sound way. We take sand from the deeper parts of the North Sea and put it front of our coastline, which protects us when the storm comes.

How does that work? Are you creating a sandbar?

Yes. Our coast is all sand dunes, like you have in certain parts of the Carolinas and some parts of Texas. Big waves form in deeper water. So when you lower the water depths just in front of the coastline, even if the sea level rises and the waves come in, the sandbar breaks the waves into smaller ones. Depending on the type of storm and the way the water is flowing, the sandbars will last one to ten years. If the sandbar has eroded too much, you pump sand again.

We have a big coastline in America. How should we protect our coastlines as sea levels rise?

The way we have started doing it: with our coastal maintenance work. We can continue doing that in the next ten years. During the next one hundred years, if the sea level rises some six meters or something like that, well, then, I think all is lost. I doubt if we can ever persuade people to pay for that. But my crystal ball can’t envision a six-meter sea level rise.

Let’s envision something more modest, like two or three meters.

I think two meters we can manage. We pump more sand and, in places that are most vulnerable and you cannot pump, you build hard structures like dikes or barriers. We have built storm-surge barriers to block the natural harbor entrance into Rotterdam. It used to be the biggest port in the world. It’s now the third largest, still a very big port. If the storm-surge barrier there became too low in fifty years’ time, we’d probably build a new one. But there is another problem with climate change, which attacks us from the back. We get heavier downpours. We get higher river discharges from the Rhine River. We get droughts in the summer. We have been increasing the river dikes because they’re necessary to protect the low-lying lands. But we’ve also been giving certain low-lying polders back to the river. Which means the river gets more room to store its water during high-water periods. 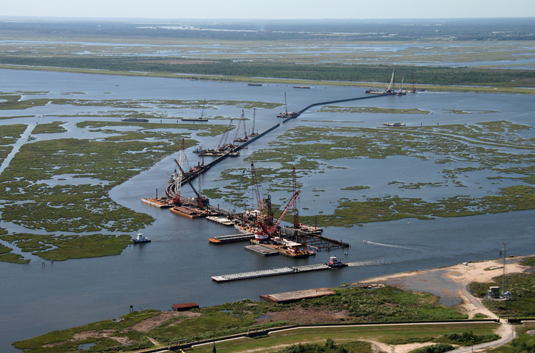 Do you think that’s inevitable? That we’re going to have to give some land back to the sea?

Yes. In Holland, we have been doing that, making cuts in the dunes and letting seawater enter in a safe way. But that was largely an environmental move, because we wanted to bring back certain plant species that had been lost for one hundred years. It’s not so much a safety concern as a matter of creating new brackish habitats. In certain places, you should give the land back to the sea. I was in New Orleans in January 2006 and saw some of the devastation. I think certain areas there you should give back to the sea, and other areas, if you want to stay there, you must protect.

That will probably be true of a lot of coastal cities, not just New Orleans.

We’ll need to develop a range of approaches to combat rising sea levels, including something we call ‘soft coastal engineering.’ Now I have a subscription to Engineering News Record, so I’m aware of the major construction projects being done in the U.S. One of the projects I’ve seen is the storm-surge barrier being built across the New Orleans Inner Harbor Navigation Canal. In my opinion, this is a completely wrong structure. It’s a vertical wall to stop the waves. That thing will collapse when you have another category-five hurricane.

How would you redesign that?

I would restore the marine marshes, the growth of trees, the barrier islands. That’s where your protection should be, not in these massive storm-surge barriers. Another thing I have seen in Louisiana is the devastation left behind by the oil companies. It is mind-boggling. They dig canals to get their rigs in and then they leave them and nature takes its destructive course, and a canal twenty-five meters wide develops into a canal one hundred meters wide.