Kuma in Mies van der Rohe’s Crown Hall, on the IIT campus in Chicago. Photo: Edward Lifson The 2010 Pritzker Architecture Prize was recently given to the Japanese duo who lead the firm SANAA. People in the know can think of several other Japanese architects who also deserve the prize. One who is not as […]

The 2010 Pritzker Architecture Prize was recently given to the Japanese duo who lead the firm SANAA. People in the know can think of several other Japanese architects who also deserve the prize. One who is not as well known in the United States is Kengo Kuma. Born in 1954, Kuma leads a Tokyo-based firm that has completed dozens of projects, including the Hiroshige Museum of Art, in Japan; the Great (Bamboo) Wall house, in Beijing; and the Opposite House hotel, also in Beijing. His feet are in traditional Japanese architecture with his mind looking through the 21st century.

Last week Kuma visited the Illinois Institute of Technology (IIT), in Chicago, to show his current work, which includes a concert hall in Besançon, France, and a contemporary art center in Marseilles. He’s also redeveloping the Gustave Eiffel–designed train station in Budapest and working in Naples and Granada. In the United States, his only commission is a house in Connecticut, but Kuma is on the shortlist for a medical center at Columbia University, in New York. At home he is updating a Kabuki theater and Tokyo’s central post office.

Kuma is known for exploring new materials and, at IIT, he showed images of his experiments with concrete embedded with glass fiber optics, walls of plastic filled with water, and plastic teahouses that inflate—“Ready to go in ten minutes, like ramen noodles!” he said. During his recent visit to Chicago, Kuma spoke with me in Mies van der Rohe’s IIT masterpiece, Crown Hall.

Many economists say that the twenty-first century will belong to Asia. How might that influence world architecture?

Bruno Taut said that Western architecture is about shape and form and Asian architecture is about relationships. The last two thousand years were driven by European cultures. I expect we’ll find new paradigms of space. Probably it will be very enjoyable! [Laughs] Chinese history is of cultural exchanges with their neighbors. This can happen again in the twenty-first century. China may be the center of the world, and they may fight with other cultures, but they will also collaborate with other cultures. That tension can move the world in interesting new directions. This will change architecture.

China changes fast and it’s complicated. What’s it like for you to work there?

I was always interested in Chinese culture because my father was a big fan of China. Growing up we had Chinese furniture, we ate Chinese food; as a kid I was already influenced by Chinese culture.

Historically, we Japanese were influenced very much by the Chinese, but we adapted their work and then they were influenced by Japan! I find my inspiration in the small differences.

In your lecture today at IIT you spoke of your work as, among other things, a process of looking for the essence of materials. You mentioned reinforced bamboo, travertine so thin you suspend it like a screen, Tyvek made to look like Japanese rice paper—even duck feathers inserted between glass for a wall! How can you find the essence of a new material every Monday morning?

New materials always stimulate me—and change my style. Fifty years ago, for architects consistency was a value. But in my time flexibility can be a value. Behind the flexibility, people like to see consistency. In my case I have it. My essence cannot be altered by changing time, changing technologies, or new materials. That’s the profundity of the creative process.

You know, I wanted to have a fan under the duck feathers in the wall to blow them, but it was impossible!

I bet you’ll keep trying. But what is the consistent aspect of your work?

Probably it came from the house in which I was born and grew up. It’s a very old Japanese house, from the nineteen-thirties. Most of my friends were living in very new houses. From the experience of that house I am connected with the tradition of old Japanese building. That is my base. The ‘mother of my design’ is always landscape. Architecture is a part of the landscape. It is not independent. That is our tradition; still it is a lesson for us. 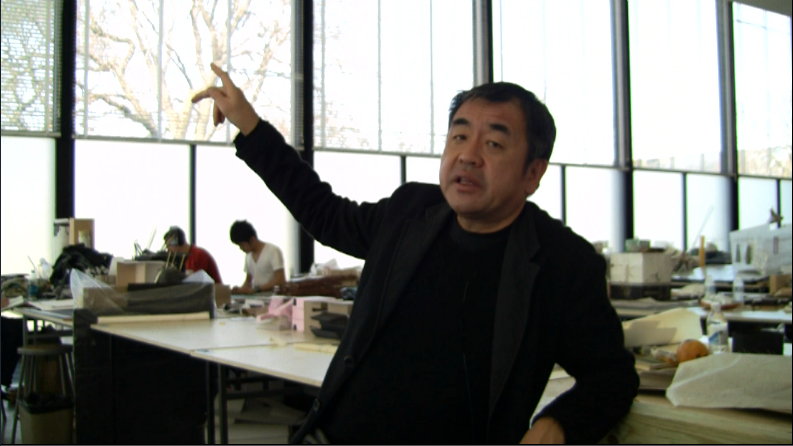 In Japan you try to teach ‘the essence of architecture’ to students. How do you do that?

I don’t speak with them without using models. Computer images are not enough. We always talk in front of the model, or in front of the mock-up, or in front of real three-dimensional items. If we’re facing that kind of a real thing, the conversation can be real. The conversation without those items cannot make anything. That is a rule of mine in the university. The discussion in front of the computer screen is not so fruitful I think. Because the image is just basically image. It is very limited, very thin. Even a small model is better than an image.

Speaking of real three-dimensional items: You know, Frank Lloyd Wright’s Robie House is just a few blocks away from here. You mentioned Wright so many times in your lecture today—you said he is your biggest influence—but you don’t have time to see Robie House because you’re so in demand you arrived this morning and you fly out of Chicago right after dinner! How frustrated are you that you can’t see it?

[Laughs] Yes, there are many buildings in this area by Frank Lloyd Wright! I can remember clearly my experience in Robie House and also his other works. It’s okay not to see them, because in my memory the buildings still strongly exist.

Your museums are extraordinary in the ways they calm the visitor and help us shed the chaos of daily life. They relate beautifully to their sites and to the art they contain. What do you think will be the role of the museum in the twenty-first century?

In the twentieth century different aspects of our lives were separated, but in the twenty-first century many aspects of city life can be merged together. The museum can be the center of life in the city, like a public living room! The museum of the twentieth century was basically an isolated box. I try to make very comfortable, very soft, and quiet spaces. That kind of softness is needed in the museum of the twenty-first century. My policy is to bring in natural light and nature, even if I use new materials. I combine nature and artwork so the border between nature and art can be very ambiguous. Traditionally, in Japanese houses, the landscape, artwork, and architecture borders are very ambiguous. We didn’t frame artwork. Framing art is an invention of Western culture.

The approach to your museums—when you leave the city, before you enter the museum—is transformative.

What does ‘sustainability’ mean to you?

In Japan, historically we did sustainable design because of the limited land, poor energy supplies, and every resource was limited. But that kind of bad condition was the mother of real creation of Japanese culture. And today we do the same things as before. I think sustainability is not an end. We should use it though, because sustainability can be the mother of good design.