Q&A: Thomas Heatherwick on His “Seed Cathedral” in Shanghai

Photos: Edward Lifson Great world’s fairs traditionally leave one main, indelible image in the public’s consciousness.  In 1893, Chicago gave us civic monuments around a reflecting pool, out of which sprang the golden statue of the Republic. The Eiffel Tower soared above the 1899 Paris fair; it was the tallest man-made structure at the time. […]

Great world’s fairs traditionally leave one main, indelible image in the public’s consciousness.  In 1893, Chicago gave us civic monuments around a reflecting pool, out of which sprang the golden statue of the Republic. The Eiffel Tower soared above the 1899 Paris fair; it was the tallest man-made structure at the time. Buckminster Fuller’s geodesic dome at Montreal’s Expo ‘67 enveloped a brave new world. This year, Shanghai presents the biggest World Expo ever, with more than 200 pavilions. But the most unforgettable building is not the largest. (That would be the red inverted pyramid representing China. It’s grand and imperial, but retreaded modernism without great detail.) The most indelible experience of architecture at this fair is at one of the smallest pavilions—the one from the United Kingdom, designed by London’s Heatherwick Studio.

After walking great distances in the dreadful heat and humidity of the Shanghai summer; after being bombarded with flashing lights and LED monitors and music and hundreds of thousands of people from all over China waiting three, four, up to nine hours to visit the most popular pavilions; just when you’re so beat you think you cannot absorb another thing—there it is. The sculptural structure is like a giant sea urchin, or a porcupine, or a squashed exploding star. Its protruding rods seem to carry energy from inside this alien thing. Other pavilions claim to take visitors into the future, but this one actually delivers. Or is this crazy moon-crawler taking us back to a primordial past?

Recently, I spoke to Thomas Heatherwick about his design, his message to the Chinese people, and the purpose of world’s fairs in the 21st century.

Tell me about the project brief—what did the British government want from its pavilion?

We were very conscious of the context in which it was going to sit—the world’s largest-ever Expo. But the brief from the government asked for a building that showed that the U.K. is a good place to live and work, has good governance, and is multicultural and diverse and sustainable. So you’re going slightly numb reading that brief, because you know that that’s exactly the same brief that every other designer of every other pavilion has been given. And the British government added,  ‘And get voted one of the top ten pavilions!’ We felt that if we just did a cheesy advert for Britain, with clichés, we would not achieve that goal. The only way we would be noticed is by being slightly oblique.

We argued very strongly to the British government that instead of trying to say everything about Britain, we needed to try to say one thing well. The Expo theme, ‘Better City, Better Life,’ sounds catchy, sounds maybe too cute? But in a way it’s very serious. What’s the future of cities? What more serious question is there? We felt that we must respond to that. And something that the United Kingdom did pioneer is the integration of nature into cities. The world’s greenest city of its size in the world is actually London. The sheer quantity of parks, private gardens, public squares, private squares—and then we found that the world’s first botanical institution was in the U.K. And arguably one of the first public parks in modern times was in Britain.

So how did that idea about green cities lead to this design?

We tried to find something that would symbolize nature in the city as a starting point for the design. And we found that the Royal Botanical Gardens at Kew have a project to collect and preserve twenty-five percent of all the world’s plant species. We found that many people knew of this in Britain, but no one had actually seen it. The seeds aren’t there to see! We’re used to thinking that seeds are insignificant. So we felt that there’s a symbolic role that the seed could play, having to do with potential. And so we made one simple move. We trapped sixty thousand seeds in the ends of optical tubes that are seven and half meters long. 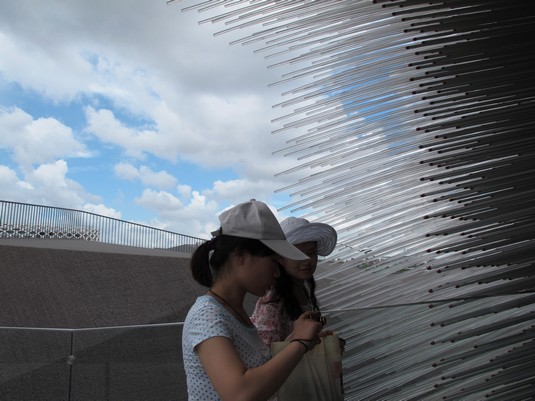 What messages does your pavilion send to the Chinese visitors?

One message is that Britain is more than ‘bobbies’ and Big Ben. It’s a magnet for creative people. Many of the most brilliant have chosen to locate in Britain and London in particular. It’s just amazing what’s there. And so the pavilion is there to reflect that and try to change what people think a pavilion might be.

So many of the pavilions here are razzle-dazzle—they wow you. And so many of the towers booming in Chinese cities also flash lights and change colors and so forth. Is your pavilion a statement of resistance to that trend in place-making?

At this Expo, in a sea of stimulation, we thought that calmness would actually be the thing that would refresh you and that you might be the most thirsty for.

Then is your ‘Seed Cathedral’ a place of contemplation in which a Chinese visitor could regain their self and remember who they are, in this society speeding ahead at breakneck speed?

We don’t want to preach or patronize. We wanted a place you could interpret in many ways. You might find it technically interesting, or decorative in some way, or anything else. We give it no obvious interpretation.

We called it the ‘Seed Cathedral.’ I fought for that name. ‘Cathedral’ is not meant to imply any religious connotation. It is to evoke an architectural quality of space which is grand.  Maybe grandiose even. 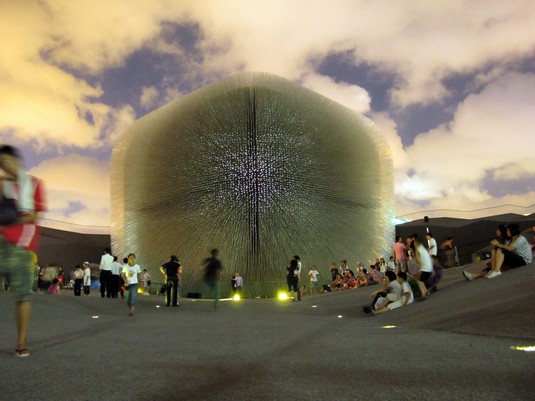 The great Gothic cathedrals with pointed arches are based on trees leaning together. You take it even farther back—to the seed.

And the daylight coming through the tubes and the seeds is slightly like stained glass. It’s quite nice. I didn’t know that that would happen! But we were deliberately playing with the contrast between grandiosity and insignificance, bundling these things together. In a way, the power of the potential in those sixty thousand seeds is mind-blowingly massive. And you’re standing in the middle of the most bio-diverse point you could possibly stand in, in Shanghai! Everything is there, and yet there’s a kind of absence, it’s totally calm. We have even had people say, ‘Where is it? There’s nothing here!’

Have you been to the U.S. pavilion?

What do you think of it?

I know potential Chinese clients have come to you since this pavilion opened, and Her Majesty’s Consul General in Shanghai says Chinese visa applications to the U.K. are up significantly. Did the U.S. miss an opportunity here to show great American design to the seventy million people, mostly Chinese, expected to attend this fair?

I see this as a party—for countries! What’s a party for? It doesn’t have fully defined outcomes. But we know that it’s enriching, breaks routine, and broadens life. It’s an excuse to do something that would otherwise not happen. So I think it’s important that countries take that approach with themselves as well. I think people admire courage. Push forward—don’t be a caricature of your country.

In that context—it’s not just that it’s nice to patronize architecture. It’s essential to focus on progress. The public are hungry for the world to keep moving! And culture to keep shifting! Our job as designers is to change people’s perceptions.

You have said, ‘Architecture can make the world a better place.’ How does your Seed Cathedral do that? 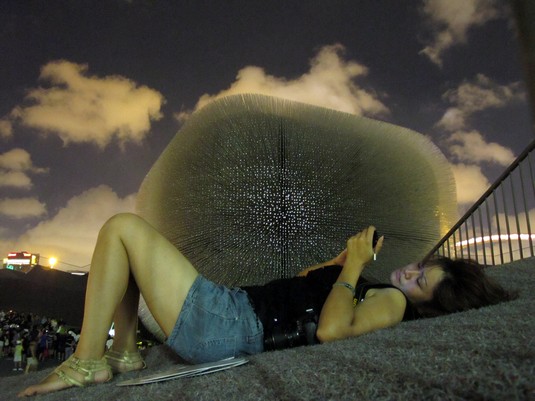 Related: For more on Thomas Heatherwick, read our 2007 profile “The Nexus of Art and Invention.” For more by Edward Lifson, an architecture critic based in Chicago, visit Hello Beautiful!
.