The Los Angeles County Museum of Art (LACMA) continues to sprawl. This week America’s most eclectic and oddest collection of art museum buildings opened a rather elegant new pavilion. The Italian architect Renzo Piano designed it and it holds about an acre of art. LACMA asked Piano to give its campus a more unified sense […]

The Los Angeles County Museum of Art (LACMA) continues to sprawl. This week America’s most eclectic and oddest collection of art museum buildings opened a rather elegant new pavilion. The Italian architect Renzo Piano designed it and it holds about an acre of art. LACMA asked Piano to give its campus a more unified sense of place, but when his first work opened on the grounds, the Broad Contemporary Art Museum opened in 2008, many people were less than thrilled.  This new, large, one-story, $54 million dollar Lynda and Stewart Resnick Pavilion, complements BCAM; its angled white fins on the roof diffuse sunlight and direct it through skylights into the spacious pavilion, to wash over a grey concrete floor. Renzo Piano spoke (on several occasions) with Edward Lifson; the following is edited from those conversations.

Edward Lifson: Michael Govan, the Director and CEO of LACMA, says there’s something “emotionally charged” about one-room buildings: when we walk into them, we feel oriented and we feel the great breadth of their space. He mentions the Pantheon, the Hagia Sophia, and Ronchamp–and says that’s what he wanted here. Do you see it like that? Why are you laughing, Renzo?

Renzo Piano: Oh, Michael! I like him because he is a visionary person. Yes, he wanted the purity of no stairs, no escalator, just space and light for art. I think that this building in reality is, well, it’s what he wanted: a tool, a tool to show art. Mainly visual art, but it’s a flexible space with a capacity to transform. You can play music in here, you can have dance or theater, or film. It’s what he needed in LACMA–this flexibility. To be able to show the treasures of the collection, but at the same time to explore other worlds. For example, before this officially opened, they placed a Walter De Maria in here, by itself (“The 2000 Sculpture,” 1992). It is so large, it’s rarely shown, because it’s difficult to find a place for it. I must say, it looked beautiful. 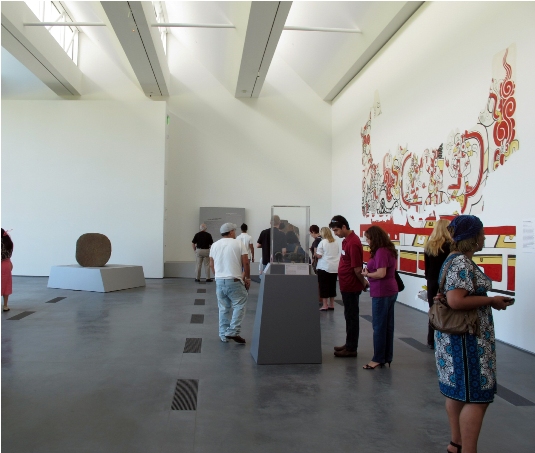 LIFSON: Yes, as it gently scattered the light and reflected it back up and all around. The lighting system works so well for sculpture. But here, for the three inaugural exhibitions–one on fashion, one showing some of Lynda and Stewart Resnick’s collection of pre-20th century paintings and sculptures, and one on ancient Olmec art–we see three lighting conditions. They’ve darkenedmuch of the building and the skylights with scrims. Actually, at BCAM, the top floor skylights are usually covered with scrims when paintings are shown and also in Chicago at your Modern Wing of the Art Institute, they usually close the scrims too. So why bother with all this glass and the fancy skylight system?

PIANO: No, I think it is open much of the time. And I like to give the possibility, the flexibility. It’s a tolerant space. You can do many things in it. We can learn from that. In here now, yes you see walls for the three shows. All the shows have some natural light, and the center, over the Olmec sculptures, is very light. Every day you come here it will look different. 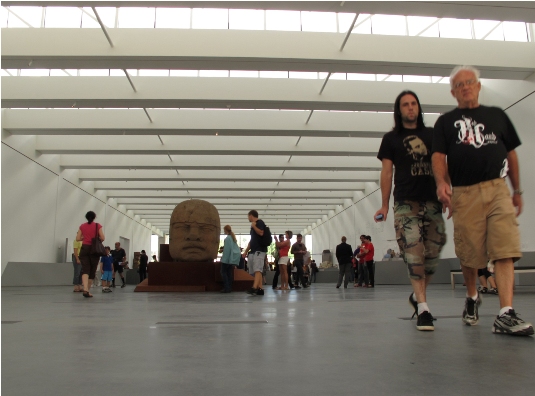 LIFSON: Yes, LACMA built interior walls to separate each of the three opening exhibitions. The galleries are long and narrow.  I kind of miss the openness it has as one space!

PIANO: As I said, it is flexible, it is a tool, it can be one open space, but it might be too large for that some of the time. But you may use it as you want.

LIFSON: You know, you walk in here, especially when it was empty, and the first thing you say is, this architecture is lovely. And the second thing you might say is, boy, this reminds me of Dia:Beacon. [As the director of the Dia Art Foundation, Michael Govan transformed a 1929 Nabisco box-printing factory in Beacon, New York into a well-received museum, which opened in 2003.] I remember coming back to L.A. one time after seeing Beacon on a perfect summer’s day and telling Michael Govan how extraordinary it was. He joked with me that sometimes he misses Dia:Beacon so much that he asked you to build him one here!

PIANO (smiling): Michael made Dia:Beacon and he can never recover! No, I mean “recover” in the good sense of the word! He never recovered because he was so happy about what he did there. He had such a success with Dia:Beacon that he needed one with him here in Los Angeles. [California artist] Bob Irwin worked at Dia:Beacon too, and Michael brought him again to LACMA to do the landscaping, with the palm trees. Bob loves his trees. I’ve never seen two such little boys so happy playing together! We make the north wall facing the park all glass so you can see Bob’s trees. [Robert Irwin’s Palm Garden includes many sizes, shapes and species of palms around Piano’s museum. Some palms are potted in Cor-ten steel  “pots,” some are not.]

I like working with Bob Irwin because I put order and he puts disorder. It’s a nice relationship. In art, it’s a funny relationship between order and disorder. It’s a constant fight between rules and freedom. And also freedom and memory. When they come together it can be exciting, and I think they do here. When you look at the Resnick, it’s quite evident that it’s a combination of classic but it’s also what the great critic who spent time in L.A.–Reyner Banham–called the “well-tempered environment.” 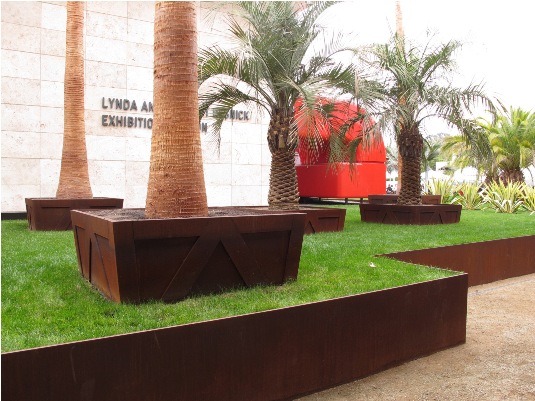 LIFSON:  Inside here, this place feels very calm; it’s amazing how in the middle of Los Angeles you create a sense of place and of calm.

PIANO: We thought a lot about sound. You know, in this space – just listen [Piano claps his large hands loudly – and pauses to listen]: you have 5 or 6 seconds reverberation time. You could play an organ in this room! 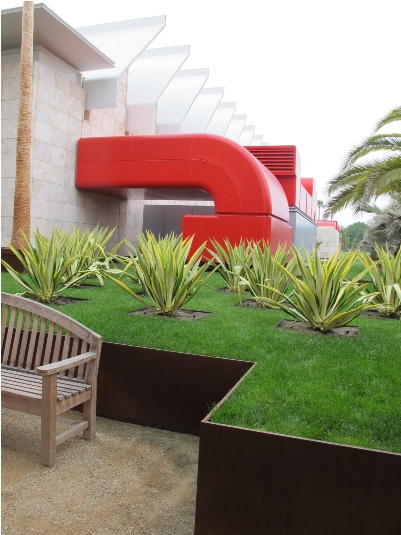 LIFSON: What’s with all the bright red you use at LACMA, Renzo?  The mechanicals are exposed, celebrated, as at your Pompidou Center, and are bright red!

PIANO: (His face lights up and he gets more animated) Red became a kind of pleasure, being in Los Angeles and looking at the beauty of color. Look at the blue of the sky, and look at the green of the trees that Bob Irwin is planting, and the way they play together. It’s about enjoyment, it’s about joy, the joy of Los Angeles! And the bright red all together unifies my work on this campus. On the Resnick Pavilion, it’s the color of the “breathing machine” [the ventilation system] and on the Broad, it’s the color of the elevator and the escalator. And I love to express those functions, I’ve been doing it at least since the Pompidou Center.

LIFSON: You’re criticized for repeating yourself in your work.

PIANO: Of course we repeat; we repeat what we like! It’s not because we are lazy people; it’s not because we want to repeat ourselves. But as an architect, you rely on your own experience. It’s like a writer or a painter or a filmmaker.

LIFSON: Even people who deeply admire your work criticized your first building at LACMA, the Broad Contemporary Art Museum. Do you see this as a chance to make up for that, or improve on it?

PIANO: I think so, I think so. (Piano gets a big smile.) But I never saw this job at LACMA as just creating one building. I always saw this as creating a number of buildings coming together, to create a place for people. The museum wants to be the town square they say L.A. doesn’t have. So when you see BCAM alone you might think it’s a bit massive, a bit simple. But when you see BCAM connected the way it is now with the Resnick Pavilion, and then you start to see the piazza we are designing with a restaurant and a café – they will open soon – and then we will connect all this to LACMA West [the former Robinson-May department store that LACMA will renovate into offices and galleries and where a planned subway line will have a stop with direct access to the museum], then you understand that the real challenge here is to put together all those things. Don’t look at BCAM in isolation, it looks much better as part of the ensemble!

LIFSON: Ah the ensemble and the piazza. As you often say, you’re Italian: “there’s very little you can do about it!”

LIFSON: One last thing: I saw Frank Gehry not long ago and he had finally seen the Modern Wing of the Art Institute of Chicago that you designed, which directly faces his band shell in Millennium Park. He said of your building, “I like the galleries; Renzo’s getting better!” What do you say to him?