The small heart of oyster-tecture is already beating along the coast of the Atlantic and Gulf of Mexico. Though embryonic, it could become a full-fledged infrastructure in a matter of years. For that to happen, practical aspects of current oyster restoration methods need to integrate a larger view for its future. The majority of oyster […]

The small heart of oyster-tecture is already beating along the coast of the Atlantic and Gulf of Mexico. Though embryonic, it could become a full-fledged infrastructure in a matter of years. For that to happen, practical aspects of current oyster restoration methods need to integrate a larger view for its future.

The majority of oyster projects are quite tiny, measuring in the single digits of acres – and even that’s a stretch. Most reefs are no more than a few feet wide by a few feet long. That doesn’t reduce their positive impact. Little is the new big when it comes to oyster-tecture. Larger projects do exist in places like the Chesapeake Bay and off the coasts of Louisiana and Texas. However, they are still a fraction of the size of historic oyster range in the same locations. In fact, if you combine all the projects throughout the eastern coastal states, you don’t have the biological framework necessary for natural restoration. That means that without people actively restoring wild populations, only farmed oysters would endure.

For nature to take over, we have to rebuild the metapopulation of the Crassostrea Virginica – something the current culture of oyster-tecture does not structurally support. Metapopulations (essentially, a population of populations) are a critical mechanism for the evolutionary and genetic survival of any species. Such a population of populations allows both individuals and groups of an organism to be healthy and thrive. Before oysters were overharvested, over-polluted, and their habitats over-developed there was a universe of separate areas that contained millions of individual oysters that interacted along a marine highway of oysteranic (not sure if that’s a word) reproductive interdependence.

Oysters in the warm waters of Winyah and Long Bay (in South Carolina) interacted with those in the expansive marshlands of eastern North Carolina, and in turn, they mingled with those in the rushing tidal rivers of the Chesapeake Bay and Maryland estuaries, and so on into the bays of the south shore of Long Island and the tidal basin forming Long Island Sound, through the coastal plains of Connecticut, and then those Yankee sliders frolicked (in an oyster kind of way) with the populations in Cape Cod and so on and so further into Maine, Prince Edward Island, and Nova Scotia until their habitat dissolved into the icy ocean of northern Canada. This web of invertebrates celebrated each spring with a continental-scale orgy making the Atlantic a soup of oyster-ganismic juice full of the spat formulating the next generation of shellfish.

Places like New York Harbor, Chesapeake Bay, Cape Cod, Winyah Bay, Long Bay, and northern Florida served as nexuses for the genetic interstate of crustacean love that laced together all the other reefs. Each habitat functioned independently while benefiting from the wellbeing of the totality of all the others–that is the essence of metapopulations and the reason they are so important. Variations in water temperatures, salinity levels, food sources and quantities, water speed, velocity and depth along with seasonal changes in rainfall, erosion and other factors produced a variety of specimen such as Blue Point, Quonset, Canada Cup, and Salt Pond that are enjoyed by eager shuckers everywhere today. But the oceanic orgy of these bivalve mollusks has been dampened due to the attenuation in their numbers throughout their historic range. Since human intervention is the only ecologically viable and societally valuable way to re-grow a metapopulation, you would assume that advocates, scientists, designers, volunteers, and leaders of restoration projects would embrace this methodology in their work. But that isn’t the current condition of the oyster-tecture community culture.

The Culture of Oyster-tecture

First of all, oyster-tecture is quite young. Most programs are 5 to 6 years old at most.   This new technique combines conservation biology, marine biology, urban design, city planning, and storm water management with water quality improvement, fishery replenishment, shore protection, and carbon sequestration as a living infrastructure. It is coupling two very different professions: science and design.

Science thrives on study that begets new questions that need new study. Design is deadline-driven. Analysis, research, and evaluation are needed – but must occur within a finite timeline before decisions have to be made and projects envisioned, executed, and completed. Mistakes are inherent with design and opportunities are always missed. It’s part of practicing. The tension propels designers, architects, and others to continue to work harder and harder to more completely encompass the fullness of opportunities in new projects. Neither is better or worse. Both are, in essence, looking for answers. Science searches for empirical results, while design seeks more subjective conclusions.

Academic institutions and non-profits manage the bulk of oyster restoration projects. Virtually all projects are funded to deal with a local/regional issue as well as to better understand the many factors acting upon the reefs and how oysters are dealing with these factors. For example, biologists at Rutgers University in New Jersey are studying the effects of heavy metals on oyster reproductive organs in rivers such as the Raritan and Hackensack. Also, they are evaluating the presence and persistence of Blue Claw Crab predation as a factor of how pollution softens oysters’ shells. Researchers from Baruch/CUNY are working to determine how and if oysters influence the denitrification of sediment in estuarine habitats, and if wild or aquaculture oysters are more prone to reducing nitrogen in these aquatic habitats. This type of research is vital for generating a scientific basis for oyster restoration and learning what needs to happen to resolve localized problems. But it can become distracted by homegrown affairs instead of a vision for large-scale restoration of a metapopulation.

Similarly, oyster-tecture projects coming out of the design community depict big ideas that look great in exhibitions, but lack any true understanding of the science or practicality of oyster restoration. Most of these ideations are also very localized with a focus solely on a specific city and tend to disregard the need for a larger effort that covers the entire historic range.

The way in which oyster projects are funded compounds the problem of excessive focus on local complexities. Oysters are but one of many areas of study within the field of marine biology, making the competition fierce for money. Plus, living sciences are by nature concerned with interactions of localized conditions, and funders usually don’t give to projects that can’t show a track record of progress. Scientific progress presents best when extreme attention is given to a limited number of variables centered on the details of a local area. Add to that the fact that oyster-tecture is a very young field–what you get is a recipe for fighting for small amounts of money to do small projects.

Along with funding challenges are the concerns of regulatory agencies. They do not like the idea of big oyster reefs forming naturally or being created by people in populated locales where contamination of the oysters is highly likely. Why? Poaching. Oysters from highly polluted waters could enter the food supply and make people get sick or worse.  The only way to safeguard against poaching would be to have security 24/7. This is something not typically paid for by grants and it’s not an expense municipalities are ready to shoulder. Tiny projects don’t cause any real danger if poached, so regulations exert their power to maintain size downward.

The community itself is key. With so many challenges coming from funding, regulations, academia, design, volunteers, little time is left to network with other projects. The framework for oyster-tecture has yet to form. At present there is no working list of all oyster projects in the United States—having one would allow people from different projects to communicate and collaborate. What is happening in Florida to restore oysters is fairly unknown to those doing the same work in Mississippi or Louisiana or Georgia.  Oyster advocates in South Carolina aren’t talking with their counterparts in North Carolina, and southeastern projects are isolated from projects in New Jersey, New York, and New Hampshire. There is no Facebook-like site for people, agencies, and institutions working to reestablish oysters to network online, no message board or fan pages to post updates of projects, and no real community of people to learn from each other. The isolating effects from the lack of communication makes for only more focus on small, localized projects–thereby missing the chance to envision a continental-scale restarting of a metapopulation. Until this is resolved, it will be difficult to work toward a truly infrastructural-based oyster-tecture. 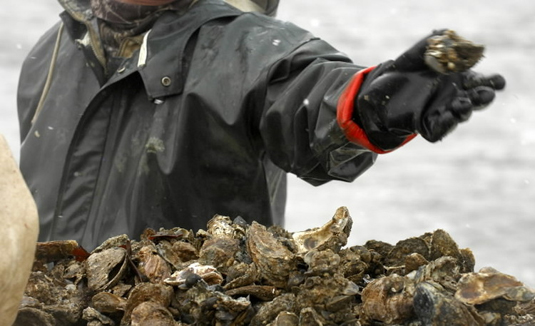 Yet, the small heart is beating. And small is better than no heart at all. This isn’t the first time a group of disconnected do-gooders were working for the betterment of society and the Earth. The green building industry was in a similar place before the US Green Building Council and LEED quantified and qualified what green buildings should, or at least could be. The same is true for conservation biologists prior to 1985 when the Society of Conservation Biology was formed to advance the science and practice of conserving Earth’s biological diversity. Moreover, there is the reality that small projects can become much bigger too. This is something I have witnessed from a front-row seat over the last five years. In the next post, I’ll outline a practical guide for growing small projects into something big.