Costa Rica, known for its biodiversity, national parks, and thriving eco-tourism, has a severe municipal solid waste management (MSWM) problem that threatens the health of local communities, destroying a fragile ecosystem whose well-being is of critical to those who live and visit there, as well as to the planet. Starting in 2009 when I visited […]

Costa Rica, known for its biodiversity, national parks, and thriving eco-tourism, has a severe municipal solid waste management (MSWM) problem that threatens the health of local communities, destroying a fragile ecosystem whose well-being is of critical to those who live and visit there, as well as to the planet.

Starting in 2009 when I visited the village of Nosara for a research project that focused on the biomimetic potential of the dry tropical forest ecosystem in Northwestern Costa Rica, I’ve been hoping to develop a design-build project.  I wanted this project to have a positive impact on the local community as well as involve my students from New York.

sLAB Costa Rica is that project. The design-build initiative of the School of Architecture and Design at the New York Institute of Technology (NYIT) is lead by my studio, Holler Architecture. Based on our research last fall we developed designs for a communal recycling center in Nosara, Costa Rica– to be built by my students over this coming summer. To aid in their expenses for housing and in making a documentary by Ayana de Vos the students set up a Kickstarter campaign to raise $24,000 by May 21.

After meeting with local community leaders I understood the severity of the waste management problem as well as the importance of having a communal recycling and education center. I knew that such a building would be a wonderful design problem for architecture students; that it would force them to become “recycling experts” along the way. It’s also a building that has the potential to educate and inspire the community about environmental stewardship, which is probably the most important contribution to any community designers can make.

To bring in many different ideas, I organized an NYIT-wide design competition for the project last November, as part of the sLAB (student-led architecture build) community service initiative at NYIT architecture school. A group of nine winners, partially selected through a public voting process on the project’s Facebook page, was sent to Costa Rica this January,  to present their initial design ideas to the local community, and to solicit their feedback. We visited two existing recycling centers in San Jose, documented the project site, and reviewed our designs with a local architect. Since then the students have been finalizing the design and the construction drawings which are almost complete.

There is tremendous momentum and support for the initiative in the local community. The land to build has been donated by the local Civic Association, local construction professionals are offering their services pro-bono, and funding is available to begin construction, with more fundraising for construction materials currently underway. The project is ready to be built this summer and the students are eager and willing to donate their time and skills to help with construction. 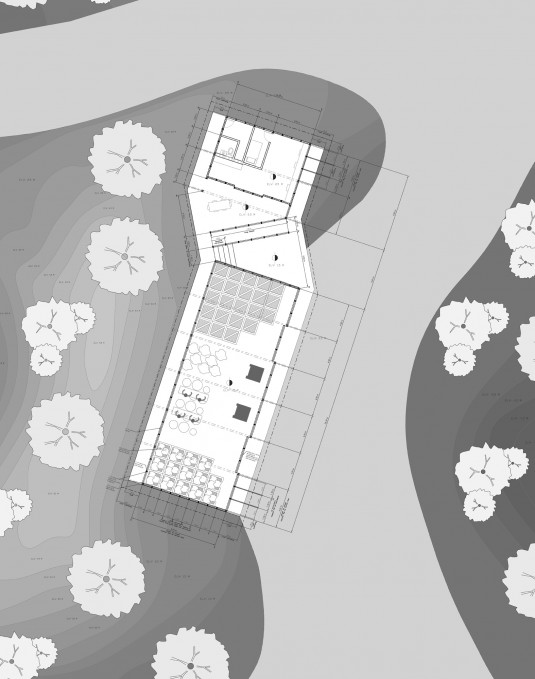 The final design is decidedly modern, but inspired by local passive tropical design strategies. An elongated building form, consisting of three zones (a sorting facility, an open lobby, and support spaces) under a common roof is placed horizontally along the existing slope of the site, minimizing excavation, and impact to the site. An open entry lobby with a wall made out of up-cycled aluminum cans, and a landscaped seating area with views into the recycling area will enable the community to engage with and become knowledgeable in the process of recycling. 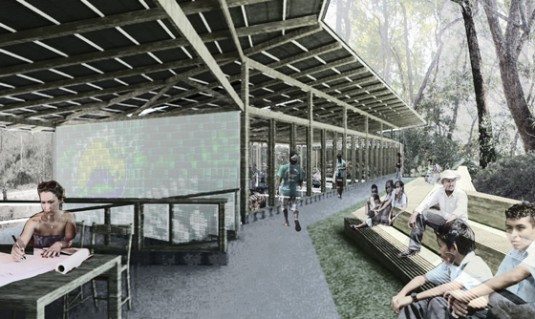 The building’s narrow plan is oriented to maximize passive cooling through cross ventilation. The roof geometry is optimized to capture prevailing breezes but protect building from the Papagayos, seasonal gale-force winds. The high ceilings and reflective roofing materials will further reduce heat buildup. The building’s structure will be made from local pochote sustainably grown on the project site. Salvaged materials will be used whenever possible for the walls and roof. During the wet season, rainwater will be collected on the large roof, and stored in cisterns, for 100% of the facility’s water needs. 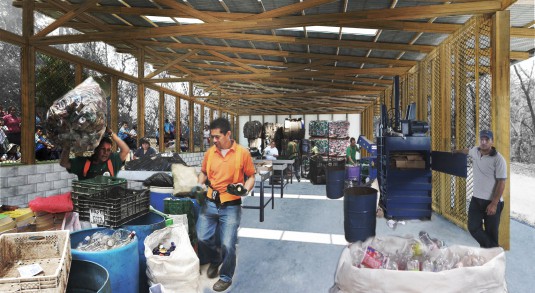 Your help is curcial to making the Nosara project a reality this summer. It’s an important story that needs to be told. You can help us help the community of Nosara, by making a pledge and sharing this project with anyone who might be interested in supporting it. We’ve reached our initial goal but our fundraising efforts continue, with a new goal to reach $24,000 by Monday, May 21. The additional money will be used to support student travel, ground transportation, expensive specialty film equipment needed to shoot during the rainy season. Best of all, one third of the funds raised above the initial goal will go to the local community as a cash donation to purchase construction materials for the project.

Tobias Holler,AIA, LEED AP, is an assistant professor of architecture at the New York Institute of Technology where he teaches environmental design and technology. A registered architect in Germany and New York, he is also the principal of HOLLER architecture, an independent design practice in Brooklyn, New York. In his research and design practice he is interested in the relationship between architecture, urbanism, landscape, and technology with an emphasis on using environmental performance as a generator for architectural form. HOLLER architecture is one of seven firms chosen for NPNY 2012 (New Practices New York) through the AIA New York, an award that recognizes and promotes innovative and emerging architecture firms within the city.