Last week, the Seattle-based architecture firm Mithun announced that it will be a consultant on both the State Center Complex in Baltimore, Maryland, and the Great River Park Project in St. Paul, Minnesota. As large-scale exercises in urban redesign, the two projects couldn’t possibly be more different, so Mithun’s multidisciplinary researchers and designers will definitely have their work cut out for them.

The State Center is a vital transit hub at the heart of Baltimore. When it was built in the 1960s, it replaced a vibrant urban neighborhood with a 28-acre, single-use campus of government office buildings.  Last year, the State Center began work on a 15-year, $1.5 billion project to undo that damage and re-invent itself. Mithun has been named as one of the design firms who will help integrate the State Center into the urban fabric, creating a mixed-use community through public-private partnerships. The proposed plan will introduce housing, retail, and parks while relocating the government offices currently occupying the complex. The transit hub will now also be a sustainable, walkable neighborhood, in keeping with the principles of New Urbanism. 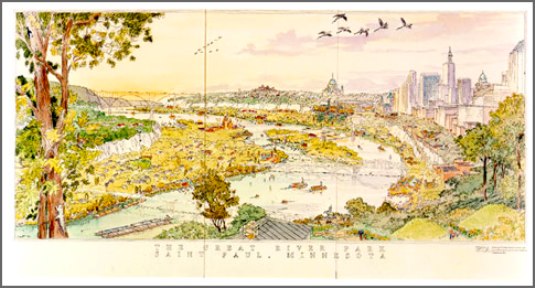 The Great River Park Project, on the other hand, is concerned not with the center of the city but its periphery. St. Paul owes its existence to trade on the Mississippi, but the city has always been disengaged from its waterfront, perhaps because of the stone bluffs that separate it from the river. City officials have dreamed of connecting the city to the river since the 1980s. But the turning point was probably in 1992, when the city hired the architect Benjamin Thompson to conduct a study on the subject. Thompson produced a single watercolor image (above), coining the phrase “Great River Park Project,” which he explained as “a park in the city, a city in a park.” 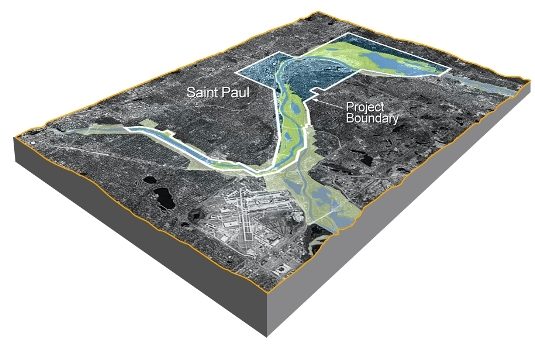 The project now stretches along the entire 17-mile river valley, but Thompson’s idea of an urban-natural continuum still resonates in Mithun’s role. Within the master plans created by the urban planning firm Wenk Associates, Mithun will determine what architectural interventions can be made in this area, and how the impact on energy, water use, and the ecosystem of the Mississippi river can be minimized.  More importantly, the firm will also spearhead community outreach. St. Paul is now a multicultural city, and Mithun will work with various cultural and ethnic groups to see what they really care about, and how the plans for the park can truly come to represent the interests of the city’s people.

It is the communities who will determine the ultimate success of both initiatives. Baltimore’s citizens must re-possess a built landscape; in St Paul they must re-connect to a natural ecosystem. The very scale of such undertakings is daunting. We will be keeping an eye on how these projects develop—for if Mithun and their associates manage to pull it off, we might just be looking at new landmarks in sustainable urban design.