My old neighborhood—the Yorkville section of the Upper East Side—is under siege. Work on theSecond Avenue Subway—an increasing annoyance for the past four years—has now morphed into a full-blown urban nightmare. Once the liveliest pedestrian thoroughfare in the neighborhood, Second Avenue, from 96th Street all the way down to 63th Street, is a massive construction site, an […]

My old neighborhood—the Yorkville section of the Upper East Side—is under siege. Work on theSecond Avenue Subway—an increasing annoyance for the past four years—has now morphed into a full-blown urban nightmare. Once the liveliest pedestrian thoroughfare in the neighborhood, Second Avenue, from 96th Street all the way down to 63th Street, is a massive construction site, an active, excavated, fenced-off trench, with bulldozers and trucks and cranes, interrupted every ten blocks or so by huge steel service structures that loom eye-to-eye with the second and third floor apartments lining the boulevard.

All of this activity is occurring on the east side of the street, with disastrous and almost certainly fatal consequences for most of the businesses unfortunate enough to be located there. Many have already closed. And the stores and restaurants lucky enough to survive are facing four or five more years of this insanity. (Maybe more, given the nature of these projects.)

Intellectually I understand that completing the Second Avenue subway, more than five decades late, is at least on paper a Good Thing for the City. An investment in its future. (Never mind that this is just Phase 1 and will only connect to the F-train on 63rd Street. Never mind that at this rate, the entire line—all the way to down to Hanover Square—should be finished in about two hundred years.) Still, what passes for progress these days looks pretty grim. 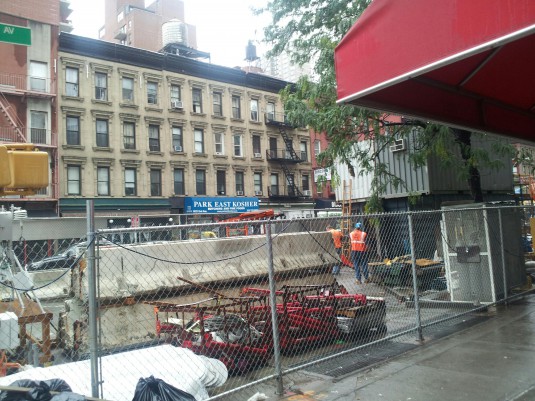 Things are especially gloomy on 86th Street and Second Avenue, for years the spiritual crossroads of the neighborhood, now an unholy mess, and eventually home to a bustling subway stop. Prior to World War II, Yorkville was a working class German enclave. Beer halls, restaurants, and social clubs (a few of them with pro-Nazi leanings) lined East 86th Street, the neighborhood’s unofficial Main Street. You were as likely to hear German spoken here as English. When the Third Avenue El came down in 1954 (a move pushed by real estate developers, who argued that once the Second Avenue subway was completed the El would be redundant…cynical laughter is permitted here), the neighborhood began its decades-long transformation. The Yorkville that I knew was in a state of constant change. The pace of it ebbed and flowed, depending on the economy, but the end result was always the same: new and big prevailed.

For three decades, I watched as virtually all traces of Yorkville disappeared. What emerged in its place was an Upper East Side, stripped of small-scale urbanism and charm. Today there’s not much left from the old neighborhood. Two remnants of the past are now trapped on the east side of Second Avenue, between 85th and 86th Streets, a sliver of sidewalk dividing them from the blue boards, the heavy equipment, the Jersey barriers, the insane clamor.

Schaller & Weber —the self-proclaimed “award winning maker and purveyor of authentic German-style meats and charcuterie”—celebrates its 75th anniversary this year. (Happy anniversary from your friends at the MTA!) A couple of doors down is the Heidelberg Restaurant, a German eaterie serving up bratwurst and beer since 1936, with a beer garden in back and a time capsule-like décor that screams “1951!” so loud it makes you want to cry. For years—as the neighborhood changed, as their customers presumably moved away or died—those two stalwarts somehow survived. They were, in a sense, neighborhood miracles, urban oddities. Exactly the kinds of places that have been erased from Manhattan for the better part of twenty years. Six decades of gentrification couldn’t kill the Heidelberg or Schaller & Weber, but four or five or six more years of subway construction might.

About two years ago, a group of Second Avenue merchants petitioned the MTA for  relief. Even though the authority had already doled out fairly generous compensation to residents who had been forced to move, the storeowners were turned down. The MTA argued that stores constantly come and go—how could they determine which ones were truly victims of the Second Avenue subway?

Why couldn’t a tiny portion of the $5-billion construction budget be set-aside for storeowners with longtime roots in the neighborhood? As it stands now, when the subway is finally up and running (whenever that is), the merchants who made the biggest sacrifices to see it happen won’t be around the reap the benefits. Not fair. And not particularly good for the soul of the city. Meanwhile: keep these neighborhood landmarks alive! Fight through the construction. Buy some German sausages at Schaller & Weber, or stop in for a beer at the Heidelberg. The baseball game is always on.