The speakers at last week’s AIA-organized conference presented big ideas for sustainable cities, but they glossed over some sticky issues.

A map of the 11 emerging mega-regions in North America. Image: courtesy the Regional Plan Association

“A badly-conceived pudding… indigestible and tasteless” was Lewis Mumford’s scathing review of America’s first regional plan in 1929. He castigated the plan’s authors for accepting projected urbanization as a given rather than warning against its dangers. In trying to be pragmatic, he argued, they had given up the high ground too easily.

That debate was still alive and kicking as of last Wednesday at Sustainable Urbanization in the Information Age, a conference at the United Nations Headquarters organized by the American Institute of Architects. The blunt-spoken Australian politico Peter Woods was a modern-day Mumford, scoffing at the very idea of sustainable urbanization. “You may come up with a few interventions that look good,” he said—but, in his opinion, you’d just be rearranging the deck chairs on the Titanic. To actually keep that ship from sinking, we have to rein in urbanization itself.

But other speakers defended the benefits of cities and insisted that we can accommodate new growth—as long as we think big. They tossed around potential new guiding visions for planning, like the models for zero-carbon towns that are being tested out across the UK and Australia. And New York’s chief urban designer, Alex Washburn, made an eloquent case that green networks are replacing architecture as the expression of civic virtue in our cities. 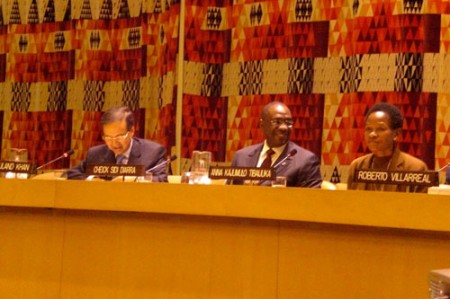 A snapshot of the UN conference

“Thinking big” wasn’t just an idiom, either; some speakers meant it quite literally. Urbanization is forming mega-regions that link metropolitan areas and often span state borders, necessitating a larger-scale approach to planning. The European Union realized this years ago and has been remodeling the infrastructure in what they call their “blue banana:” a corridor curving across Western Europe that represents a small fraction of the continent’s surface area, but 40 percent of its population (and 60 percent of its GDP).

The United States is only just beginning to think in these terms. Our country has 11 mega-regions, five of which spill over into Mexico and Canada, according to Regional Plan Association (RPA) president Bob Yaro. Each between about 600 and 900 miles long, they’re too large for cars and too small for planes, and in need of some other transportation backbone (which the RPA hopes will be high-speed rail).

But in its zeal to find inspiring new visions, the conference glossed over the stickiest issues. Many speakers urged economic and social sustainability in addition to environmental, taking for granted that the three goals are aligned. While there are some lucky concordances—e.g., green building can yield long-term cost-savings—it’s not obvious that those are the norm rather than the exception. And this kind of synergy is especially doubtful in developing countries (which were noticeably under-represented in the conference). Looking at the millions who are precariously balanced on the brink of ruin, it becomes harder to argue for any short-term sacrifices in the name of longer-term sustainability.

To be sure, these aren’t questions with easy answers. But as for the idea that we won’t have to make any trade-offs between economic, social, and environmental goals—that pudding might need some more time in the oven, because it still tastes a little half-baked.