Metropolis Think Tank visits Gensler and their consultants in San Francisco to discuss the role of irreverence and play in shaping a new educational landscape.

Throughout 2015, Metropolis’s publisher and editor in chief Susan S. Szenasy visited leading architecture and design firms across the country as part of the Metropolis Think Tank series of discussions on key issues surrounding human-centered design. On February 19, 2015, she talked to designers and principals of the San Francisco architecture, design, and consulting firm Gensler and their consultants about new approaches to education, technology, community building, and the role of irreverence and play in shaping a new educational landscape. What follows is an edited transcript of the conversation.

THE ROLE OF PLAY

Ashley Marsh, Design Strategist, Gensler (AM): We think about adults being incredibly serious, but in reality kids are the most serious creatures we know. They’re okay with taking risks, with innovating, with being gutsy in the way that they approach their life, and we lose that sort of serious play side as we grow.

When you’re a kindergartener play is how you learn, it’s the way you experience life. By the time you get to 4th grade, play is a time of day: it’s recess. By the time you’re in 8th grade play becomes an object, like a video game console that you’re interacting with. By the time you’re a senior the idea of play is completely lost. This is because we’re pressured to be productive citizens who have to make money to succeed.  In order to do that, we can’t play anymore.

Susan S. Szenasy (SSS):  And children need play. If you nail down the desks and use a factory mode of educating, you’re going to fail because children need to be mobile, they need to assemble, disassemble, work alone, and work together. All of that requires a very fluid design that allows them the freedom to do this kind of learning.

CHANGES IN THE EDUCATIONAL LANDSCAPE

Nate Goore, MKThink (NG): As a consumer of education I can now put the pressure on the providers to compete with each other, and they have to compete in very novel and innovative ways—based on price and other types of offerings. This has really created a lot of opportunities for innovation in curricular goals, in the way programs are created and in the physical environment that the kids are exposed to. As parents we have a lot of choices for how we want our kids’ educational experience to feel to them.

We have worked with the University of Phoenix on experimenting with the right balance of in-person experience combined with online programs. With a lot of the early programs, which were purely online, you could study from home and didn’t have to commute. But they were difficult to sustain for an extended period of time because real life would get in the way. If there was anything conflicting with the program, it wasn’t difficult to make the choice to not continue the education program. Physical classes provide a place for people to go to learn in person but also to help establish bonds between fellow students. Students then feel responsibility and they get through the rough spots by prioritizing the education higher because of their commitment to each other and the professor.

SSS: How is the instruction changing? What is different about today’s instruction as opposed to even five years ago? How do you integrate design and business and get the very best out of the creative people in the program?

Nathan Shedroff, California College of the Arts (NS): At a mechanical level there’s the need to be multimodal and multi-spectral—different people learn in different ways and we can’t rely on teaching in one way anymore. Education shouldn’t be all about someone standing in front of a classroom of 30, 60, or 100 people looking at them, that just doesn’t work anymore. Pedagogy is changing around more collaboration. But we need to teach people how to be creative in a collaborative space together in order to be successful, and that doesn’t come automatically. I think one of the failures of design schools is that we’re thrown on team projects and are expected to learn how to work together–that’s not collaboration, those are just group projects. There’s a big difference between group projects and team projects. You don’t become a team member unless you have some communication or collaboration skills. 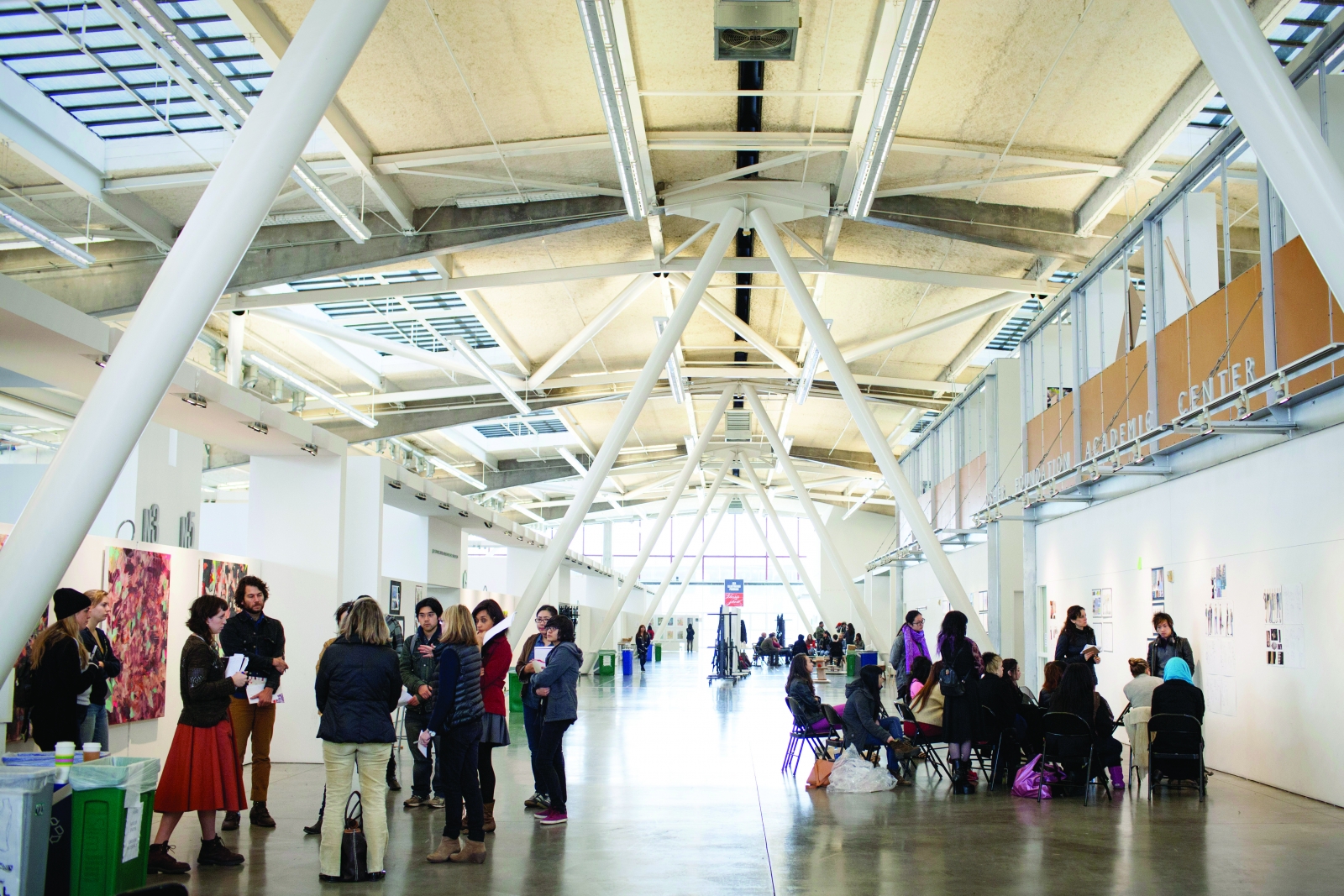 California College of the Arts makes use of the multimodal and multi-spectral spaces necessary to promote collaboration and adapt to changing pedagogy.

A CALL FOR IRREVERENCE IN EDUCATION

And that really comes down to a couple of things, there’s first of all context: What’s the social context in which you’re learning? The second is history. If you look at the great experiment of public education, it’s one that comes out of the Scottish educational master plan during the Industrial Revolution. We had to build a set of skills which enabled us to work and communicate in the factories. We are now confronting a much more diverse world; one which has much bigger, hairier problems, and we need to be able to ask ourselves: “Is this history of education the appropriate history and can we reconfigure it in some form?” And then we need to think about outcomes. What are you getting from this expensive educational context?

SSS: How do we become brave, irreverent and get something done so that our world gets better?

LK: I think it’s about establishing an educational construct which is much more diverse and inclusive. It’s a system that captures the wit, the irreverence, and the questioning and prioritizes it. That’s how we create solutions. The second part of this is lifelong learning.

Randy Howder, LEED AP ID+C, Principal, Technology Practice Area Leader, Gensler (RH): One of our clients comes from a small town in Italy and the design inspiration behind their entire work place is around the idea of the Italian town square where, he told us, everybody knew what everyone was doing and everyone learned from each other. At the same time, everyone had their own roles within the town and they celebrated their differences while they were all part of something together. For another client, Facebook, we’re designing a Learning Resource Center, which is essentially teaching people how to be part of a society, and that society is their campus and their population of employees. Employees need to learn how to share information with each other. So they’re teaching those kinds of things, which is more about teaching togetherness, while the Italian client I spoke of celebrates those differences. So those are the two extremes and they have different spatial implications, as you might imagine.

SSS: There is a reevaluation of the human being in every context. As we exit the age of rationalism, we’re saying: “We’re emotional and we’re rational beings. We’re complex. We’re really interesting creatures who need a lot more than what we’ve given ourselves in the 20th century.”

We are biophilic creatures who relate to the natural world and have an innate love and understanding of nature’s processes, whether we know it scientifically or not, we instinctively feel it, so our buildings really need to reflect that too. How do you see buildings of today and nature working together?

NS: If you look at the way we talk about our interior environments, you realize that our terminology is borrowed from city design—the piazza, the town square, the avenue—it’s all city nomenclature, which is a nomenclature of how we build culture and how we build community. Biophilia is one part of this picture, building is another, and starting to think of architecture as a platform rather than an object is a part of this too. So architecture becomes malleable to the community that inhabits it and becomes much more deeply connected with the environment.

What we need is courage.

We are burrowing into heritage; we are burrowing into safety when we should be doing exactly the opposite. We need to courageously go into the future and not be afraid of differences, new things, of doing things differently. But I’m not sure we’re there yet.

SSS: What’s really great for us in the design world is that we have the example of Walter Gropius crawling out of the foxhole and creating the modern world after World War I. We have that precedent. Look at what he was able to do in an impoverished world when you couldn’t buy a hairpin for 10 million francs. It was an insane world that they were part of and they created a new world. 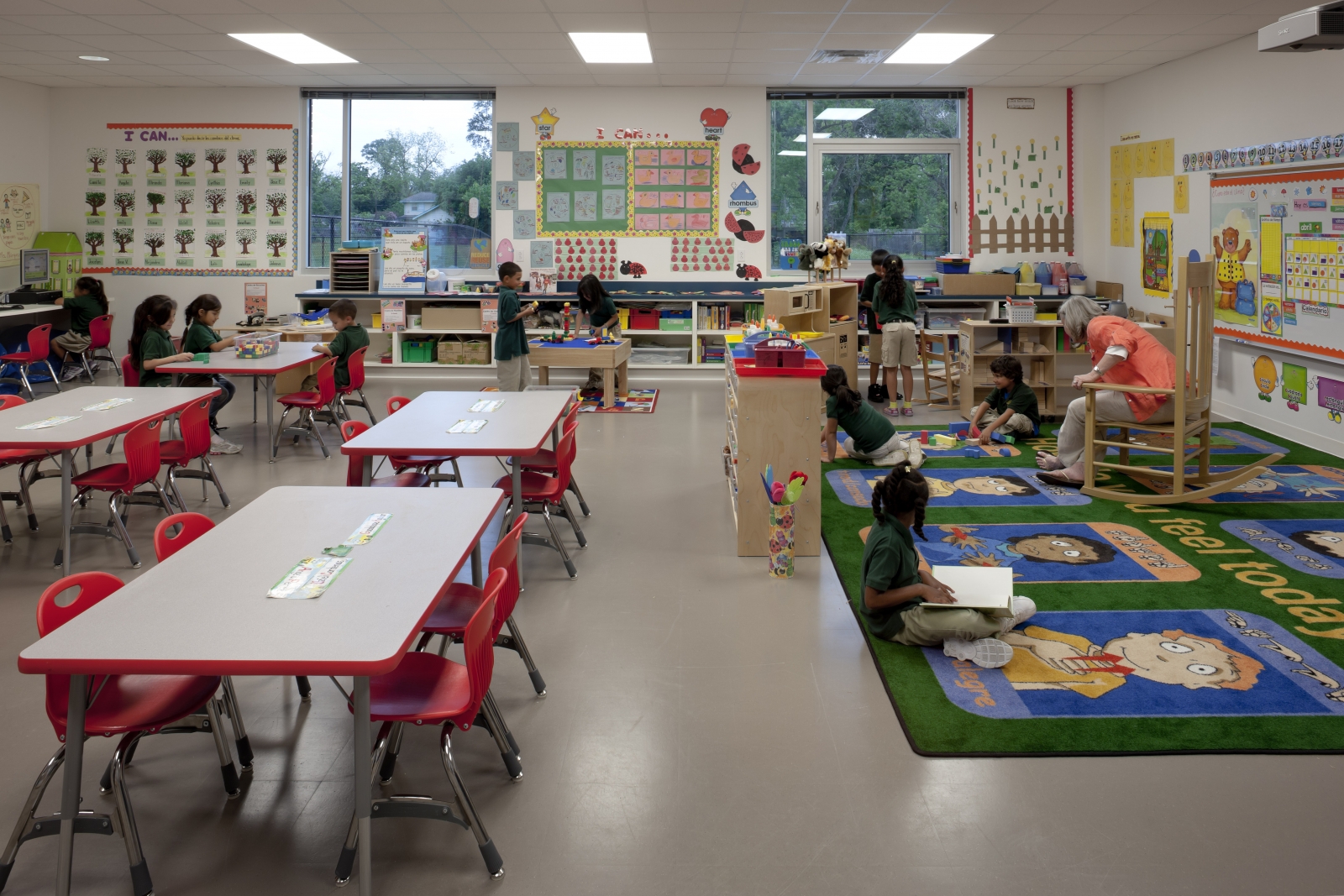 The James Berry Elementary school in Houston, Texas was designed by Gensler with the themes discussed here, of collaboration and the importance of play, in mind. The building wraps around an interior courtyard that serves as an outdoor classroom and provides each grade level with its own “learning pod” – an open teaching area that facilitates group learning.

NS: Public schools and traditional education are often driven by fear of failure and what we really need to imbue is an expectation of success. And that comes from play, irreverence, courage, and the ability to create a partnership and the ability to communicate. But, ultimately, there’s a fundamental ideological shift that needs to occur and it starts pre-K. If they have an expectation of success then we will succeed. If they’re burdened with the fear of failure there’s no way they, and we, will succeed and we’ll resort to fundamentalism and extremism and all of the other “isms” that are labeled as protective or defensive strategies.

Melissa Mizell, Design Director, Principal, Gensler (MM): At the same time we have tech companies who understand the cluster of genius that a city enables and that density drives innovation. They have chosen San Francisco as their hub and they want their employees to embrace the community. So I think we’re seeing the shifts, it’s starting to happen and we’re working with people to do that.

SSS: That is a really important point, because we just heard that we need goals and courage. Tech companies have both. They are the examples for all of us to learn from, because they have goals. They have ideas. They have cultures of innovation. What is your assessment of the possibilities here, in San Francisco, the tech capital of the world and one of the most beautiful cities in the world?

We live on an island, and we all know it. We would love for the rest of the country and the rest of the world to be more like us, but then who wouldn’t want more people to be like them? But we’re making it happen and at the end of the day we are reinventing and re-questioning everything, whether that’s education or business or design or government. We’re willing to try and we’re willing to fail. Failure isn’t as catastrophic as it is in other places in the world. We’re willing to pick ourselves up and invest in someone else’s idea and go forward.