I’ve always had an obsession with abandoned buildings. Maybe that’s because they speak to the nature of change in society, and always seems to be bursting with potential. They are often reincarnated as business parks, apartments, galleries, but these transformations are mere shadows of what the buildings were once. Bustling centers of industry, of innovation […]

I’ve always had an obsession with abandoned buildings. Maybe that’s because they speak to the nature of change in society, and always seems to be bursting with potential. They are often reincarnated as business parks, apartments, galleries, but these transformations are mere shadows of what the buildings were once. Bustling centers of industry, of innovation and commerce, they’ve been left to the winds of time. There are too many places in the U.S. where post-industrial abandonment is a common occurrence. The structures lie barren and overgrown like monuments of a past civilization; reminding us of what we were capable of once and what they can become in the future.

In the sleepy little Connecticut town where I grew up, there is such a structure: a sleeping giant void of care, yet bursting with potential. An abandoned piano factory, called Piano Works, was the main producer of piano keys and ivory products on the East Coast. And so, naturally, the factory came first and the town was rightfully named Ivoryton. Take a drive through this small settlement and you will see the traditional mono-cellular format of a factory town, with the Piano Works at the nucleus.

It is this archetype that speaks to the future potential of the factory and the town itself. Ivoryton could be a center for a different type of production: Food.

Located on 18 acres of land, the 204,920 square foot industrial space is primed for some sort of evolution. There have been artists, woodworkers, architects, etc. all moving in and out of this brick bombshell, but nothing ever holds on. With its population of 2,800 and complete lack of entertainment, Ivoryton is not the powerhouse it was in the past. But what if it were to become a prototype for 21st century town: one that could feed itself in addition to providing local jobs? 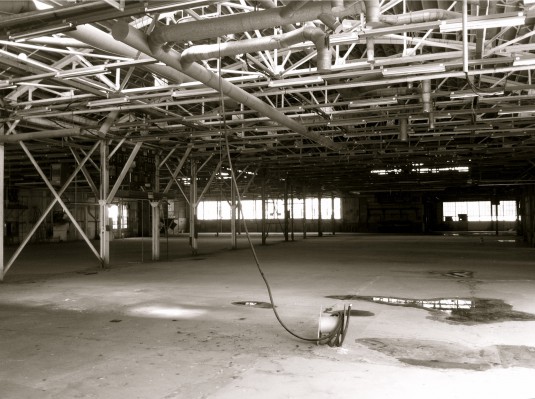 The Piano Works is an interesting example of a “stagnant structure”. The coming and going of different businesses and landlords has left the building with a working utilities and infrastructure. Complete with a water tower, running water and lights, it has all the elements for a revamp. With these components in mind, the factory could be retrofitted to be a large indoor growing nursery for Ivoryton and the surrounding area.

This retrofit would not be cheap, but it would be a terrific model for the future town. The building would become a new agricultural powerhouse; producing high-caloric-value edibles using aeroponics, and distributing them to the public for a better value than traditional agribusinesses offer. Farmers could use their seed to grow for profit in the off-season, as well as use the space for food storage. The food could then be distributed to the local population as well as supply small businesses in the area.

Food production is among the most significant challenges we face as we proceed into the future. We know that our current agricultural practices are unsustainable and detrimental to the future this country. We know that we will need to find the most efficient way to transition from this old agro model to a new one. Small post-industrial towns like Ivoryton would be a good place to begin. If this model of Agro-Town could be duplicated in other places, I believe it could save money, create local jobs, and greatly benefit public health.

Matthew Kihm is an industrial design graduate from the Rhode Island School of Design, where he also read science, and took collaborative classes at the Massachusetts Institute of Technology (MIT). This, he says, gave him an understanding of design from a scientific standpoint. His goal is to use this dual interest to not merely create products but also improve America’s infrastructure.