The Yale Building Project, Week 7: Not Quite Summer

One student-builder’s notes after a month on site 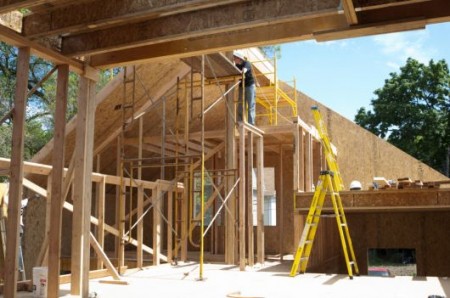 Left: The interior of the house at the start of the week. Right: Installing SIPs on the roof, on one of the few sunny days of the month. Photos: courtesy the Vlock First Year Building Project

Some notes after a month on site:

I’m on the Thursday–Saturday afternoon crew. We were scheduled to work twelve days over the first four weeks of construction. We’ve been rained out for two, had one off for a school function, and skipped one because we were ahead of schedule and out of things to do. Plus I missed a day for my brother’s college graduation and another to visit my girlfriend. The Monday–Wednesday crews pretend to resent us.

I want to work more. I should work some doubles to make up for the shifts I’ve missed, but at this point I’m not sure if it will happen. When we are not on site we are in school, and if not in school we are trying desperately to make good use of our meager free time: pursuing independent projects, working out the details of the house, watching basketball.

We are in week five of construction, with two more to go. I’m much more confident with power tools than I used to be, despite almost losing the tips of a couple of fingers to the circular saw this afternoon. My father keeps telling me to buy a hammer with a wooden shaft. They vibrate less than the metal ones. I keep telling him that the school provides us with hammers. They have rubber handles.

I had such romantic notions of construction this summer. I would get a tan. I would do something physical after eight months in front of a computer. There would be new relationships and funny stories and barbecues and trips to the beach. This is the season I remember so vividly from high school and from college: milking every moment outside between classes, swimming pools, parties in backyards, watching playoff hockey on a stifling night. I think we all felt that these two months of manual labor would provide the great catharsis in our endless first year. 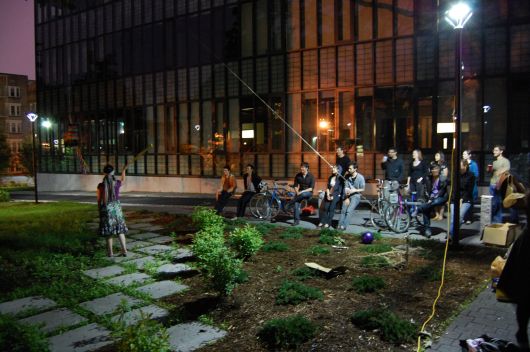 Halfway through every week, a different project crew throws a class-wide barbecue as a way for us to all get together. This week’s crew outdid all the others by providing, among other treats, a piñata.

It rains in New Haven. Perhaps it’s a bad year, but I’ve never experienced such a miserable May and June. We have our weekly class barbecues and they are cold and damp. My girlfriend and I went to Atlantic City on a whim when I skipped work last weekend. It’s the only time that I’ve been to the beach this summer.

At first I regretted not being on a morning shift, not having a routine that got me up at six and outside in the light with the dew and the quiet. But I was only on site twice in the past two weeks. Morning or not, there is no routine of long days of construction, working in the sun. We’ve spent more time in the sub-basement of the architecture building in our concurrent digital-media class.

Today we finally got the boom box working. We listened to Critical Beatdown—I haven’t listened to that album since I left college. I found out that Guns N’ Roses covered “Knockin’ on Heaven’s Door.” I attempted to do some pull-ups and failed. I balanced on a ladder on two planks over the stairwell. I nailed in studs and ripped them out again. I sent an errant piece of plywood spinning off the second floor just past someone’s head below. I stapled Tyvec: “The Miracle of Science.” 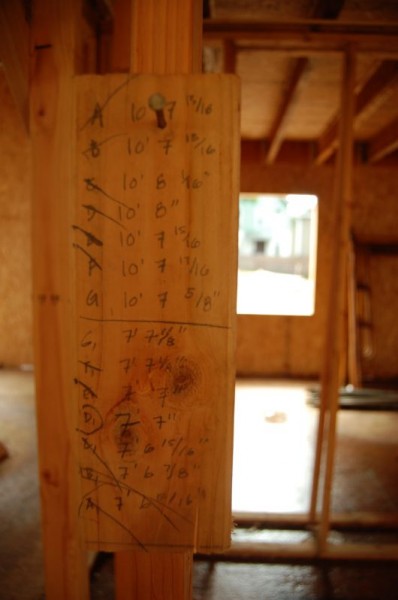 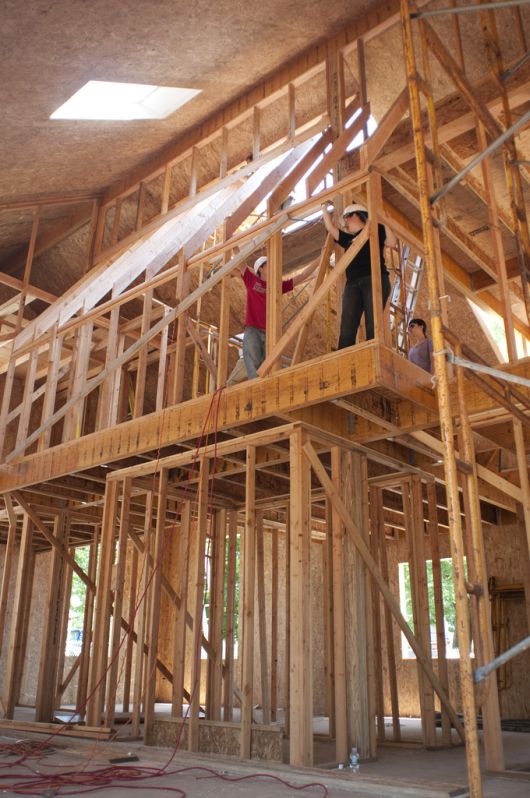 Left: Our makeshift dimensioning system as we conintue to work out design and construction details on site. Right: The interior of the owner’s living space at the end of the week. We’re already set for insulation, electricity, and plumbing, which should begin next week.

I used to work at a baseball camp not far from the house I grew up in. When not pitching to the kids, or trotting them around to lunch and the pool, all of the counselors would sit on the porch of the little pavilion we operated out of, listening to the radio and insulting each other. I stopped playing serious baseball when I was younger and the job was my first real exposure to the culture of the dugout, the handshakes and the incessant chatter.

It was cloudy today, and wet, but for the first time construction felt almost like that.
The Vlock First Year Building Project is partnering with Common Ground, a national supportive-housing developer, and the Connecticut Veterans Administration to build affordable, fully-accessible housing for female veterans. Check back next Monday for the eighth installment of the students’ weekly blog for Metropolis.