Turning MoMA on Its Head

Has the museum looked in the mirror lately?

The MoMA Design Store’s fall catalogue hit my mailbox this afternoon, and, as usual, it’s got a lot of great new stuff to drool over. There’s a rubber-encased Seiko alarm clock that’s quietly enthralling, and a ribbed-aluminum side table that manages to evoke corrugated cardboard without looking cheap (or channeling Shigeru Ban). And Mark Sanders’s foldable Strida bicycle makes a lovely cover model, decked out in MoMA-exclusive safety orange. But there’s something amiss here. Dear reader, please turn to page 31.

There you’ll find what is, by now, an old favorite—Muji’s New York in a Bag, a set of wooden-block toys depicting some of the city’s most famous landmarks: Lady Liberty stretching out her tiny right arm, the Guggenheim in a neat spiral, the Chrysler looking cute as an Art Deco button. And, look! It’s the original 1939 MoMA building itself, designed by Philip L. Goodwin and Edward Durell Stone. Only . . . it’s upside down. 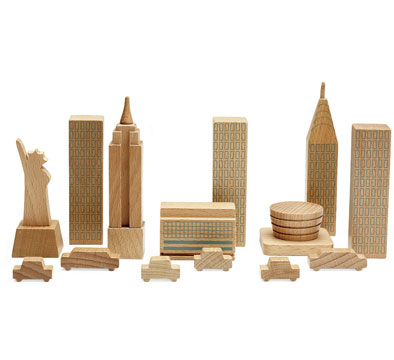 To be fair, I noticed a whole lot of publications making the same mistake last fall amid the frenzy over Muji’s first stateside store. (New York Times, I’m looking at you.) And it’s probably worth mentioning that, two years ago, when we ran a short piece on the just-released toys, only a sharp-eyed editor and a bit of last-minute Photoshopping saved us from a similarly embarrassing mishap.

Still, you’d figure that someone at the museum might have noticed that, you know, its iconic International Style headquarters had been turned on its head, the lovely circular cut-outs hugging the curb and the set-back entryway inelegantly splayed in the air. What would Stone—probably rolling over in his grave after the facade surgery his little-loved Lollipop Building received at the hands of Brad Cloepfil—make of this latest humiliation? Perhaps not much. “In this age of standardization,” he once said, “Americans need more than ever to cultivate the open mind.” Open mind, huh? Fair enough. I propose a sideways reworking of Manhattan’s Trump World Tower as a land bridge across the East River to Brooklyn. Now I can finally start walking to work.