Christopher Janney’s installation in a walkway at Miami Airport. As Miami prepares to throw a big party for art lovers and design fans to the creative extravaganza that’s Art Basel Miami Beach and DesignMiami, visitors can expect to have memorable aesthetic experiences just by paying close attention to the city’s very public buildings. These projects, […]

Christopher Janney’s installation in a walkway at Miami Airport.

As Miami prepares to throw a big party for art lovers and design fans to the creative extravaganza that’s Art Basel Miami Beach and DesignMiami, visitors can expect to have memorable aesthetic experiences just by paying close attention to the city’s very public buildings. These projects, as Mies famously advocated, integrate art into architecture. 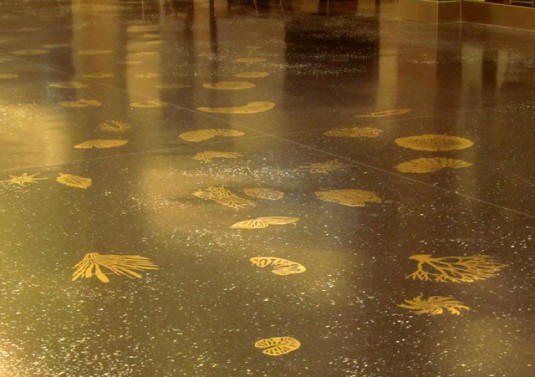 The show starts at Miami International Airport (known for its top quality art program). Michelle Oka Doner’s amazing terrazzo floor, inlaid with bronze fossil like ocean flora, makes the long walk to ground transportation enticing. The water theme continues at the next terminal, where your eyes dive into “Waterspace” , a photo mural and oversized photos installation by artist Petra Liebl-Osborne that turns the usually sedate airport walls into an under-water world. ” Initiatives like this one are very important and needed – they give people that normally might not venture into a museum or gallery a chance to connect with  art”  says Petra. 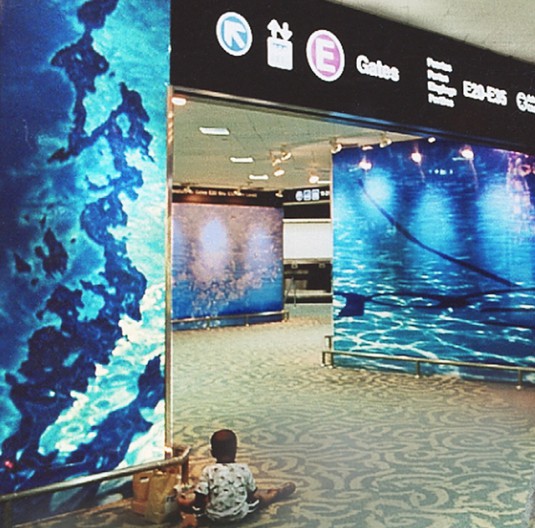 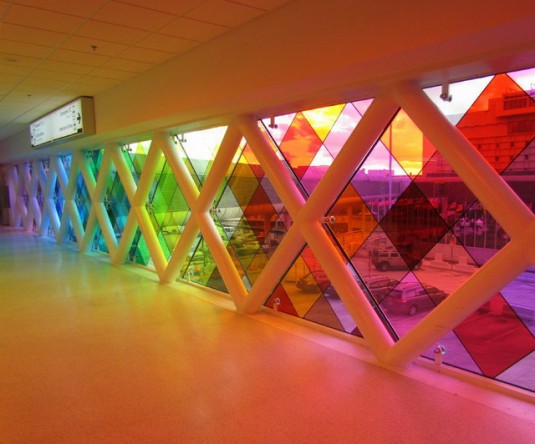 At the walkway leading to the tram station to the car rental center, Christopher Janney’s “Harmonic Convergence” combines sound and light and color for a multi-sensorial experience. Janney replaced the building’s existing glass panels with a rainbow of colored glass, laid according to the X-bracing of the walkway’s structure. An audio system adds the “sonic portrait” element that sends out a symphony of birds, thunderstorms, and other sounds native to the region, with a video sensor determining the density and composition of the tunes in sync with visitors’ movements. So that the color-rich effect would not be lost at night, standard fluorescent tubes were replaced with computer-controlled LEDs. The result is a burst of luminosity in a setting of an otherwise uninviting, brutalist, gray concrete building. 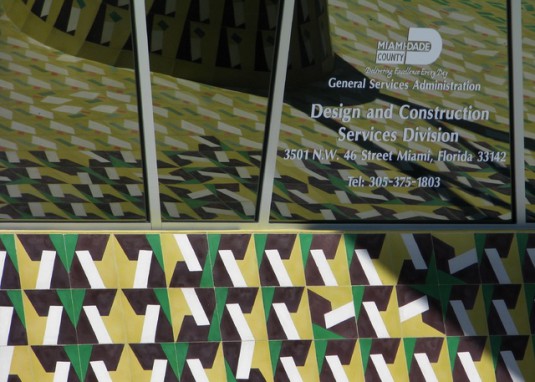 A few miles from the runway, artist Michelle Weinberg orchestrated another seamless connection of art and architecture. Hers was the winning proposal of an Art in Public Places call for the new Miami-Dade GSA building. As the title indicates, “Shadow Canopy” is inspired by architecture. “I didn’t want to just plop something foreign onto the design. The idea was to make it blend with it,” says Michelle. Known for her use of patterns and colorful geometry, she created a Cuban tile mosaic that covers the loggia of the building’s main entrance. The dynamic composition perfectly integrates with the buildings angularity, with an added “Escheresque” effect provided by the mirrored, angled glass facade. 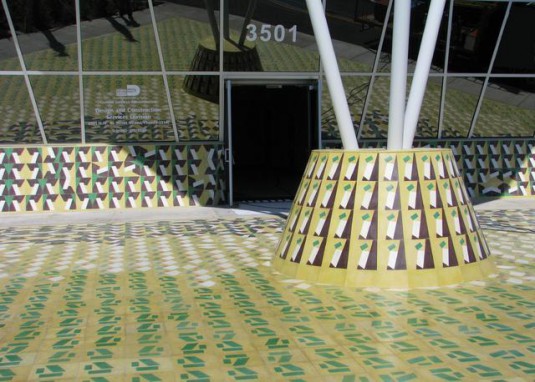 Ready to check in to your room? Well, if you’re staying at the Sagamore Hotel in South Beach, going up to your suite provides another chance to “enter” the art. The Sagamore has established itself as “The Art Hotel,” permanently displaying selections from “The Cricket Taplin Collection” which features international artists as well as some of Miami’s best. But this did not suffice for curator and owner Taplin. 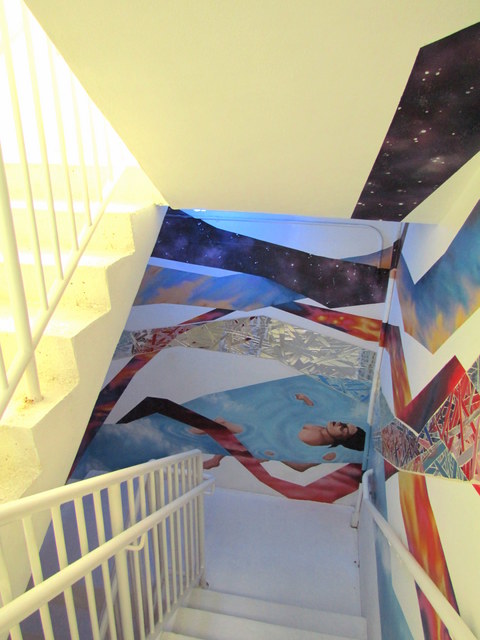 When she noticed that guests would rather use the grey, sterile stairs than wait for the elevator, she saw an opportunity to expand the collection.  And so “The Stairwell Project” was created, in conjunction with the New World School of the  Arts. Together with Maggie Cuesta, the Dean of Visual Arts, they selected six top students to paint the hotel’s staircases. These creations swirl up the six floors, each in its own style, each flight becoming a surprising entry into another world.

The project was so successful that a new set of stairs was assigned; the second round is called “TimeScapes,” scheduled to be unveiled at this year’s Art Basel.  An unusual collaboration of graffiti artist Jeffrey Noble and mosaic artist Sebastian Duncan-Portondo, the composition has a most interesting mix of a painterly quality combined with the detailing of mosaic. “These steps lead to the spa so the theme speaks of water and time,” Cricket told me. “As guests ascend to their treatments, the murals offer them visions of inspired relaxation.” This climb up the stairs feels as if you’re blissfully floating on the ocean just a few yards away. 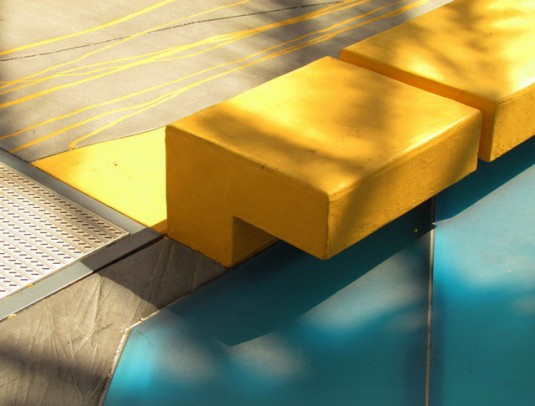 Further away, taking a break from Miami’s Basel intensity and heading up North to Fort Lauderdale, at the Museum of Art, we visit the work of architect Margi Nothard of Glavovic Studio who used a request for creating a temporary design to make a statement of how intricately connected to art her architectural ideas are. What started as a temporary access stairway to a blockbuster show, ended up becoming part of a permanent assemblage of architectural elements that redefined and enhanced the museum’s connection to the street and city fabric. To her sculptural steel and stainless steel mesh stairs, she recently added a handicap ramp that draws its inspiration from the Florida natural setting. An architect who observes nature through contemporary eyes, Nothard has designed a ramp reminiscent of the subtle balance of textures and layers found in the Everglades, where water is but an entryway to a complex ecosystem. Poured concrete  (painted, sandblasted, brushed, and sawgrass imprinted) was combined with photo-imprinted ecoresin panels and a polycarbonate blue light box, in a seductive composition that is its own “environment” while smoothly tying in with the stairs, giving the previously inconspicuous museum entrance a renewed sense of purpose. 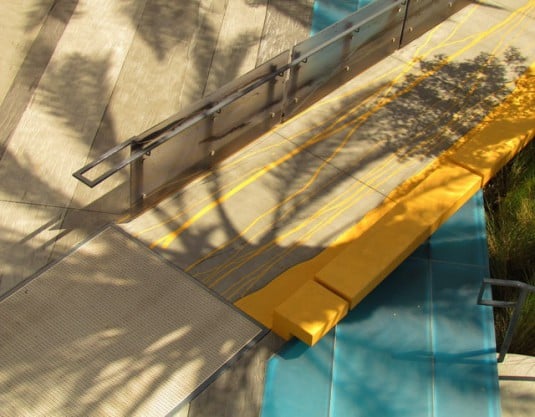 With many practical and technical considerations, architecture can easily slip into a solution-oriented practice. But as these projects show, when it engages with the endless creative opportunities that are available, architecture reaches people in ways that can have a more lasting effect, going beyond its basic utilitarian purpose.

All photos by Paul Clemence.