Which is the Salt?

Don Norman talks about his new book and the need for human-centered, sociable design.

Don Norman at the 2008 Design Research Conference in Chicago.

Last Saturday, Don Norman stood in front of a packed auditorium at the Museum of Contemporary Art in Chicago and pointed to a large screen behind him. Looming over his head was a photo of two silver vessels on a table. You couldn’t tell what was inside each object, but you had a bird’s eye view of their lids. One had several holes, the other had just one. Norman asked the crowd, “Which is the salt?”

Norman, an acclaimed author on design and co-director of the MMM program at Northwestern University, was in Chicago for the annual Design Research Conference hosted by IIT Institue of Design. The event gathered a number of speakers from around the world to talk about issues in design research from a broad spectrum of disciplines. Over the course of the two day event audiences heard about innovative technologies and human-centered processes in product development, the needs and desires of the emerging Latino market, the future direction of office furniture design, and the ongoing debate over waterfall versus agile development in software.

Norman capped off the conference with a forty minute lecture outlining the idea behind his yet-to-be-titled book due out from Doubleday later this year. After several books about product design (The Design of Everyday Things, Emotional Design, The Design of Future Things), Norman is now focusing his attention on what he calls sociable design and he used those salt and pepper shakers as an example.

The group, as Norman suspected, was split down the middle about which one held the salt. “Those of you who think it is on the left, why?” he asked about the one with more holes.

An audience member shouted out, “Because I like salt!”

“You know what? It doesn’t matter what you think. What matters is what the person who filled them thinks,” Norman said. “I consider this unsociable design. There are basically no clues to help you. You know what most of us do when faced with this? We take it and sprinkle a little in our hand and we experiment. There are design solutions obviously. It doesn’t always work, of course. I once encountered an Italian restaurant that used big shakers that were glass and some of them were sugar and some of them were cheese and guess what? I put the cheese in my coffee.”

Apply this idea to our broader world and you begin to see the relevance of what Norman calls social signifiers: those things that give us a clue as to how to behave in a particular setting. Norman is a skilled observer capable of seeing things we take for granted and extrapolating a bigger picture from that context. Simple observations of human behavior, he says, can help foster better sociable design. 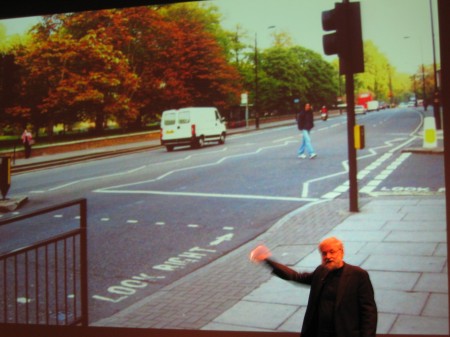 A streetscape in England: What do all of these lines and squiggles mean? And in spite of all the attempts to control pedestrian and vehicular traffic, Norman points to the guy jaywalking.

He dedicated an entire chapter in the new book to the psychology of lines, analyzing ways to improve service design. He also raises the concept of desire lines as a valuable indicator of social behavior. Desire lines are those paths that appear as a result of human footfall and can often articulate the need for something else: 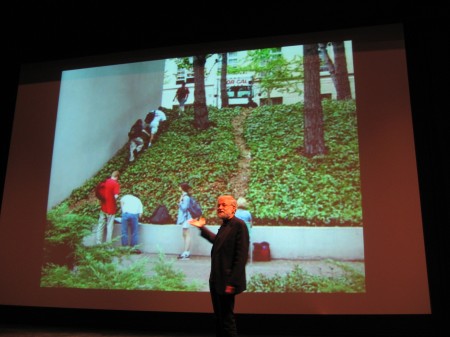 Desire lines forming on a college campus. Norman asks, “Why don’t they put a staircase there?”

After having a chat with Norman about his research and later hearing his talk, I took a walk down Michigan Avenue to see Millennium Park. I couldn’t stop thinking about sociable design. 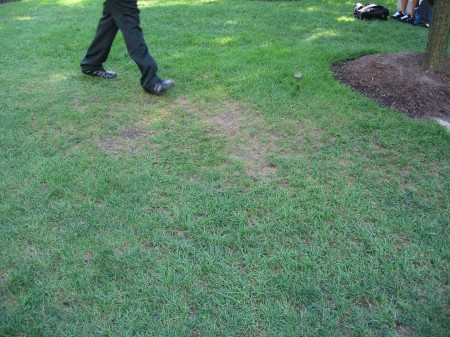 Just inside the park, I saw desire lines beginning to form. 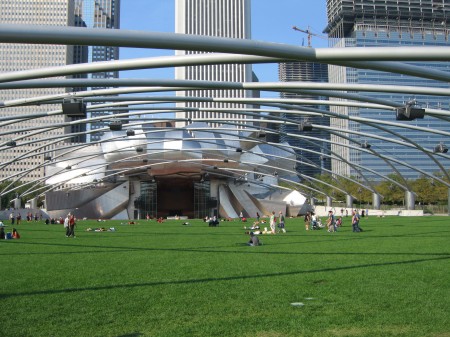 At Frank Gehry’s Jay Pritzker Pavilion I noticed the way the trellis cast a weave of thin shadows on the grass below. 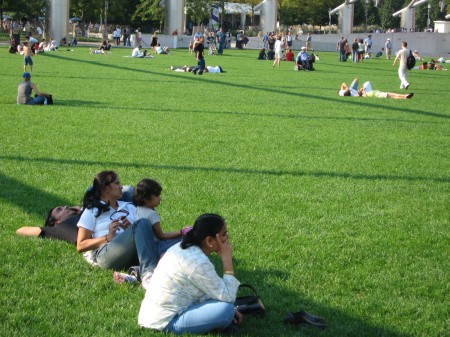 It was a hot day and some people organized themselves linearly to take advantage of those narrow shadows. 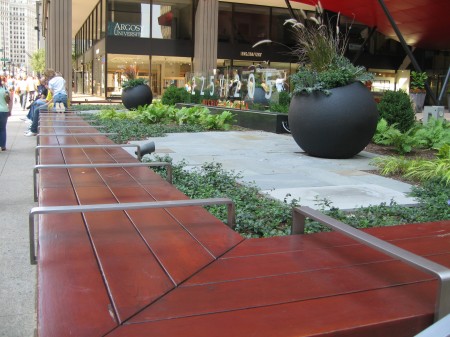 Walking back down Michigan Avenue I spot this: landscaping edged by seating. Right after I snapped this shot, a harried-looking family with several kids dumped their bags and took a break. Now that’s sociable design.