Design educators and practitioners routinely assert, with remarkable assurance, that design thinking strategies can deliver the “game-changing” ideas needed to address the critical problems of our times. Frequently, it seems, we fall in love with the promise(s) of these ideas – and the god-like power their creation conveys – and are less committed to following […]

Design educators and practitioners routinely assert, with remarkable assurance, that design thinking strategies can deliver the “game-changing” ideas needed to address the critical problems of our times. Frequently, it seems, we fall in love with the promise(s) of these ideas – and the god-like power their creation conveys – and are less committed to following through with the same degree of passion.

In an effort to provide a ‘proof of the pudding is in the eating’ model of design education and practice, first year students in Oregon College of Art and Craft and Pacific Northwest College of Art’s joint MFA in Applied Craft and Design begin the program with a pre-semester, intense 10 days to learn about collaboration and design-build. This helps them to get to know each other and it teaches them to work together, on designing and building a project for an actual client. With an emphasis on civic engagement, the projects for the program are selected for their potential to benefit an organization or group of people who do not have access to designers or cannot afford to pay for their services.

While there is a growing interest among designers in humanitarian work, many current projects tend to be located in distant countries whose cultures and contexts are often unfamiliar to them. In some case designers are drawn to foreign projects for their exotic appeal and for the opportunity to jump on the global networking bandwagon.

But complex issues like disaster relief, rapid urbanization, and healthcare are critical and demand big ideas, and need design-build approaches that stay close to home and work with the human and material resources at hand. These projects may help us understand and effectively address extraordinarily difficult problems.

This year AC+D students, led by visiting artists, Butch Anthony and Jack Sanders, addressed the often hidden problem of juvenile crime and rehabilitation. They designed and built the first phase of a literacy center in Portland’s Donald E. Long Juvenile Detention Center. Less than 4 miles from the AC+D studio, the facility holds 12 to 18 year old boys and girls, incarcerated for one day to two years, for crimes ranging from probation violation to murder. PNCA faculty members Barry Sanders and Arvie Smith paved the way for the project through their work teaching classes to Long Center detainees. 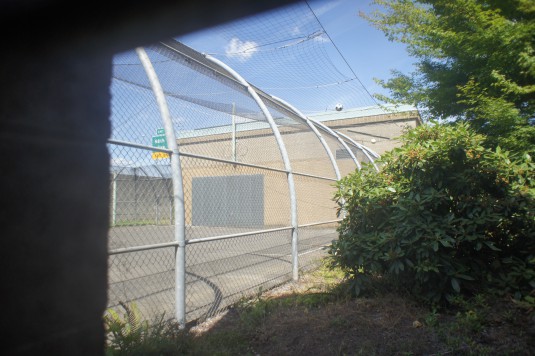 In July, after discussing the possibility of design-build at the Long Center with Barry—who suggested the project and played a vital role throughout – we met with Multnomah County Education Service District Supervisor Kevin Hunking.  He showed us the existing “library”, a 12 x 18 foot windowless room of concrete block walls, lined with particle board bookcases holding stacks of Japanese manga style action-adventure paperbacks. Long Center detainees typically have a few minutes a week to skim the shelves and borrow a book.

Kevin then showed us the space he hoped we would transform into a learning center, a 4,000 sq. ft., 16-cell detention unit, unoccupied due to budget cuts. Upon entering the unit, we were immediately confronted with a dismal façade of 16 cell doors.

Our meeting with Kevin made several things clear. It would be a new and unusual challenge for everyone involved to work at the Long Center. Each time we visited, we, as well as our tools, had to pass security and follow specified behavioral protocol regarding such things as which side of the corridors to walk along, refraining from eye contact with detainees, or looking into rooms along corridors. 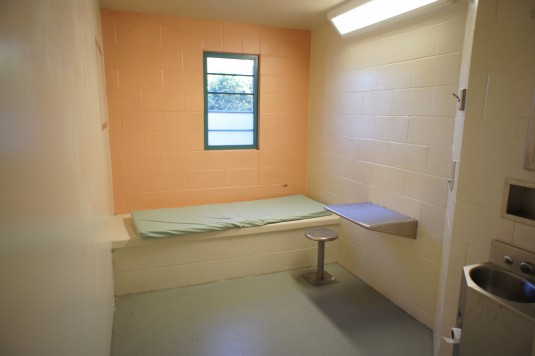 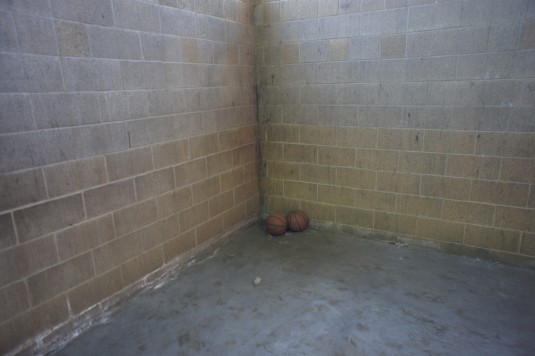 Clearly, we needed to consider space and materials in new – and sobering – ways. Detainees were adept at making weapons of common classroom supplies such as pens, paper clips, spiral notebooks, and DVDs. We could not use screws that could be unscrewed, or color schemes that might be associated with a specific gang. We had to avoid creating blind spots as prescribed by the Prison Rape Elimination Act, or incorporating elements such as games with moveable pieces that detainees might use to send messages to each other.

The nature of the project meant we really had to deliver. In framing our unique responsibility to these clients, Barry addresses the issue of trust: “Most of these incarcerated kids—something like 97% nationally—have been sexually abused, which means they don’t trust anyone. One of the challenges for us at the (Long) Center is to rekindle a trust in those young people, so you cannot disappoint them or give up on them. If you say you’re going to do something, you must do it.”

Given this emphasis on the necessity for following through as well as the unique conditions of designing and building in the context of the juvenile justice system, we recognized this overwhelming project as an opportunity to make a difference.

We asked our MFA students to dream big, and then build their design for a literacy center for a juvenile detention center—in 10 days! We decided to pair unlimited imagination with pragmatic requirements to see if we could help the students realize the fantastic, while making the everyday something to aspire to. Our strategy for this dual directive was that one (the fantastic) would be a safeguard against the potential limitation or weakness of the other (pragmatism). Keep in mind that these were students with a wide range of backgrounds in art, craft, and design as well as various levels of skills. We were looking for a synthesis across disciplines. 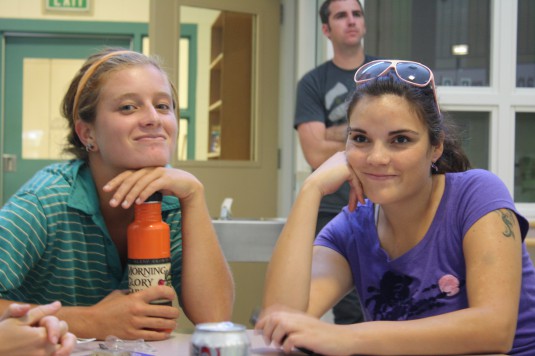 Following the principle of ‘the more specific, the more universal’, our design-build project stressed specificity in developing an understanding a complex and wide-ranging problem. And what could be more complex than the potential for rehabilitating the incarcerated? Working closely with them, their environment, being mindful of our resources–and knowing that we fully intend to make the project happen–-we prioritized the project’s identity and our accountability over other values commonly associated with global problem-solving, such as scalability and innovation.

As design thinking strategies are increasingly used to solve, or at least alleviate, critical societal problems, we may want to rethink the design-build process. We need to develop a direct and deep understanding of systems that help define the problems we’re hoping to solve, for the sake of those who would be affected by our solutions.

Today’s design students and professionals are adept at generating compelling and inventive images that depict solutions to serious, multi-faceted problems. Frequently, however, designers’ responses lack a thorough foresight of the potential impact of innovation, in much the same way that the critical problems we face can be seen as partial consequences of past innovations.

While the ability to imagine what does not yet exist is valuable, there appears to be a plethora of “game-changing” ideas that seem to show an addiction to “innovation”, rather than improving our present and future state. It is almost as if the representation of a transformative idea is our primary design goal. I have, in fact, observed this while teaching design on the rapidly transforming Arabian Gulf: Once a project was conceived and rendered in 3D animation, it was basically considered to be real.

Designers who help us see ourselves behaving well and feeling good in healthy and supportive environments provide a map for achieving positive change. There is a danger, however, that design strategies that invest in the power of suggestion may be mere wishful thinking, and are generally as effective as fad diets.

When we invest in community-based design-build efforts and see these through to their successful completion, we understand the potential of robust and diverse solutions and their rewards. Creative discoveries occur when making things is easily integrated into a project, potentially providing distinctive character and improved function.

An intense, collaborative approach assembles the expertise of all involved, as well as develops relationships that lead to commitment and follow-through. The on-the-ground, present-centered, and tangible nature of the process also offers an opportunity to appreciate what design can do, by those otherwise indifferent to design.

Design-build can be exceptionally rewarding. Here’s how visiting artist Butch Anthony describes his experience: “I have to admit I was a little concerned going into the project. I thought ‘Oh Lord, I might get stabbed working in this place… working with inmates’. And I did get stabbed. I got stabbed right in the heart by how nice the four young boys we met there were. I was also moved by how hardworking the students from Oregon College of Art and Craft and the Pacific Northwest College of Art were. They really put all they had into the project even though they had limited resources and short time to build a creative library for the inmates.”

Everyone involved in this project has expressed a similar sense of appreciation for the work of our students—and the gravity of the incarcerated youths’ situation. We have discussed a potential second phase of the literacy center at Donald E. Long, as well as other opportunities to improve the rehabilitation process through design. This project has shown us that design can truly make a difference—especially to designers who participate making their abstract ideas real.

For a more detailed description of the project, please look here.

If you’d like to read more about the project, you can read the following first person accounts: by first year AC+D students Meghan Morris, Kyla Mucci, and Coren Rau and Professor Barry Sanders.

JP Reuer is an architect and Chair of the MFA in Applied Craft and Design, a program collaboratively developed and offered jointly by Oregon College of Art and Craft and Pacific Northwest College of Art. Follow JP on Twitter at @jumpyreuer.