Artist Dannielle Tegeder Tailors Her Solo Exhibit to the Museum Itself

The new Wellin Museum of Art brings the artist, Dannielle Tegeder together with the architects, Machado & Silvetti

It’s not unusual for artists to be inspired by architecture. Less common is for an artist to be inspired by the infrastructure of a building. But that’s the case with Dannielle Tegeder, a painter whose work is informed by the intricate system of steam fitting (the mechanical parts of a building, like insulation, piping, heating, and cooling). Coming from a family of steamfitters, Tegeder is fascinated by the infrastructure’s graphic. “I grew up immersed in construction sites and seeing large scale plumbing, and heating systems installed. I have always been interested in that,” she told me recently when we met to talk about her first solo museum show at the Wellin Museum of Art in Clinton, New York. “It ultimately led to my long term fascination with cities – systems upon systems – visible ones, such as subway routes, traffic, streets, pedestrian routes, and also invisible ones such as air waves and cell phone signals.” 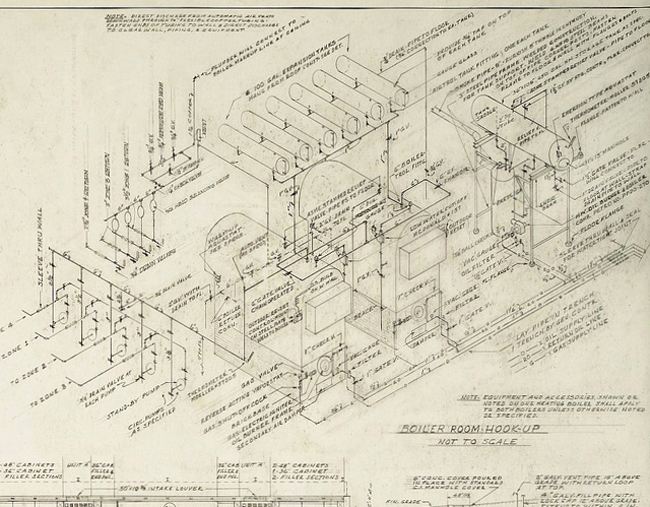 Her inspired connection to the inner workings of buildings, presented Tegeder an opportunity when Tracy Adler, curator and director of the recently opened Wellin, selected her works for the first solo show of that institution. Having met Tegeder a dozen or so years ago, and knowing how her work dialogues with architecture, Adler felt that it would be a great fit  for the Machado & Silvetti-designed museum’s first single artist exhibit.  When I asked Adler to comment on selecting Tegeder’s work, she said, “Her art has a deep relationship to architecture, it’s not just inspired by it, but also responds to it. So I saw this as a wonderful opportunity to do something that would take that dialogue to another level. As a first step, I asked Danielle to visit the building while it was still under construction.” 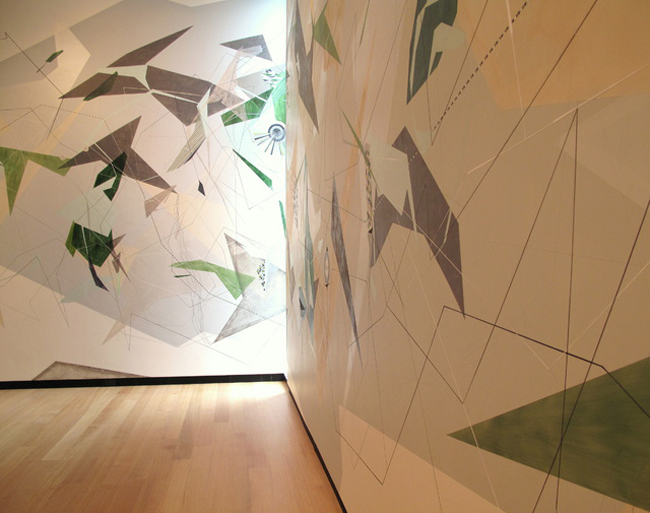 Wall drawing with light pouring in through corner window

And so she did, a few months before the building was completed. “The structure was up but I was still able to see the pipes, wires, ducts and all those systems that would end up being invisible for most but that I knew was right there, creating the context where my show was going to be. I was seeing the inner body of the wall I would be drawing on and that certainly played in the overall feel of the show,” the artist remembered her visit. 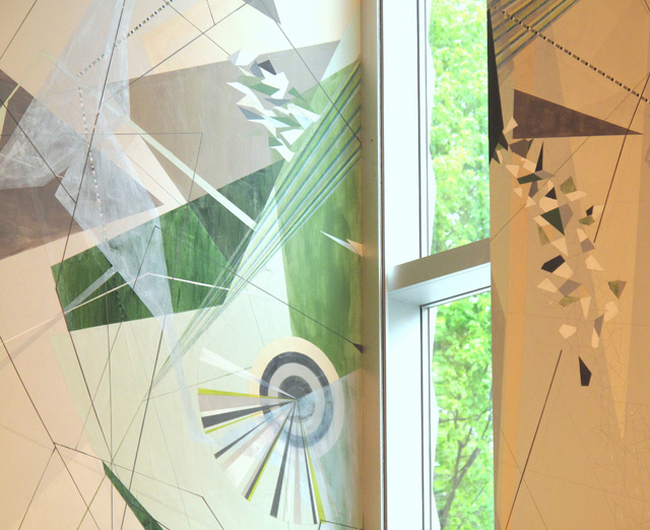 The wall drawing Tegeder is referring to, called “Ondam” (followed by an 60-plus-word subtitle), covers all three walls of a whole niche of the main museum gallery space.  At one of the corners, a vertical slit cuts through the entire height of the wall, almost as if de-materializing the actual corner edge. “That window slit is significant of the room’s architecture, it marks where the sprawling space connects – even if a for a brief interval – with the outside. I wanted the drawing to participate on that interaction as well.” So Tegeder took a cue from the tree branches that can be seen through that window (and that would be green by the time the show was installed) and incorporated the leafy flora into the palette of the drawing. The effect it’s quite amazing – though of different textures and origins, the common palette brings the outdoors inside more than any design could have envisioned. 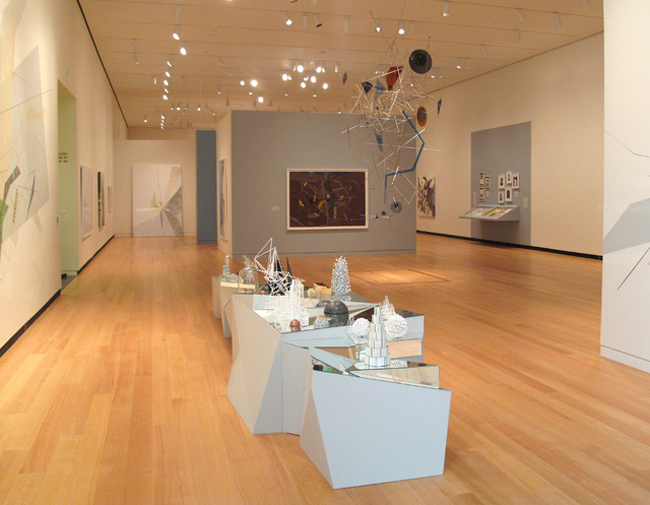 The building itself has an intimate scale, designed to house the eclectic collection of Hamilton College, a private liberal arts institution, and give it a platform for the museum’s progressive multidisciplinary approach. The architecture consciously aims at exposing the usually hidden aspects of a museum and thus makes its collection and exhibits more approachable to its audience. With that in mind Machado & Silvetti turned the collection’s storage into a highly visible feature: a 27 feet high hall is surrounded by state of the art glass cases from top to bottom, along the space’s full length. The exquisitely detailed cases (manufactured by Milan-based Goppion) though functional in character, create a new “system” within the overall flow of the building, opening into the Object Study Gallery, where students can request items for a closer look and more personal research experience. 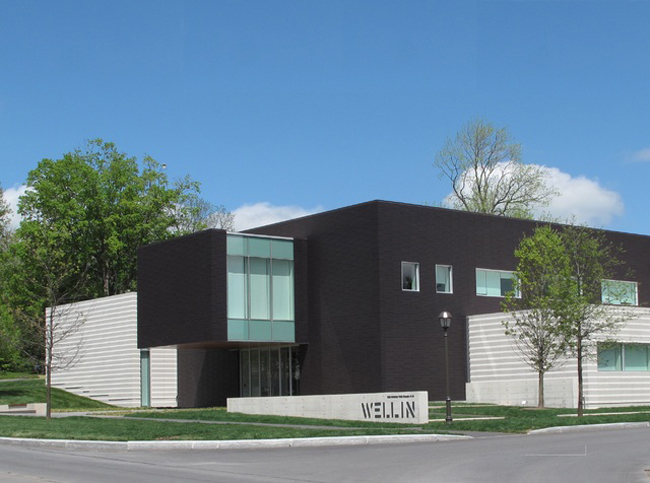 When Rodolfo Machado visited the museum in May, Tegeder had just finished installing the exhibit: the wall drawings were completed, the conceptual city model “Death Rock City” were assembled, and the “Aftermath of Soft Machine” mobile was hanging in all its dynamic excitement. Upon seeing Tegeder’s “systems” fully assembled, Machado had this to say, ”The exhibition is so well tailored to the building, just as the building is tailored to its users. I happen to find the work to be very beautiful, but what matters most to me is how it relates to our work: how the tangential light coming from one of the gallery’s windows acts on the immense wall drawing, how the exterior projections on the folded walls act on the animation, how this surface receives and manages to give us yet one more reading [a different one] of the art work itself.” An architect known for focusing on the goals of his client’s program, Machado then added, “It was a brilliant curatorial choice, with such splendid work on display: the museum’s mission is being accomplished, and we are delighted with it.” 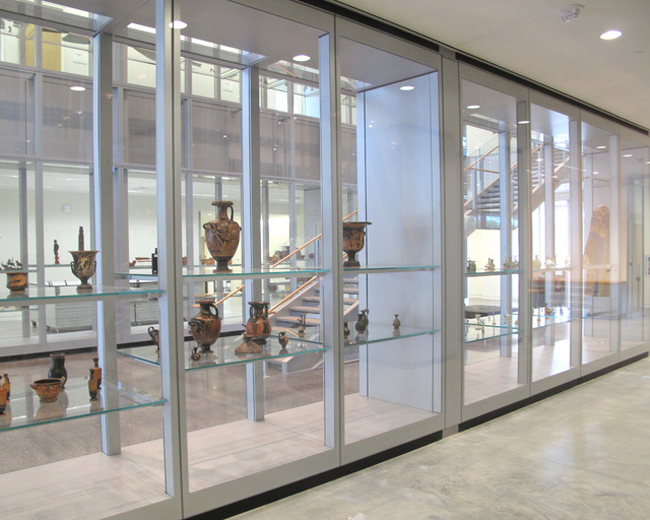 The exhibit is a multi-media feast, featuring a digitally created sound library, animation, and some of Tegeder’s early work. It all combines to encapsulate notions of architecture while commenting on it and how we relate to living within the urban scenario it defines. The artist’s and the architects’ systems interact with each other. “I like taking invisible systems and making them visible,” said Tegeder at her talk on opening day at the Wellin. Shortly thereafter she remarked on how sad that eventually the labor-intensive 40-foot site-specific wall drawing was going be painted over. Then a member of the audience reminded her that when that happens, the work would become a new system on those walls – her art coming full circle to become one with the veiled layering that inspires it. 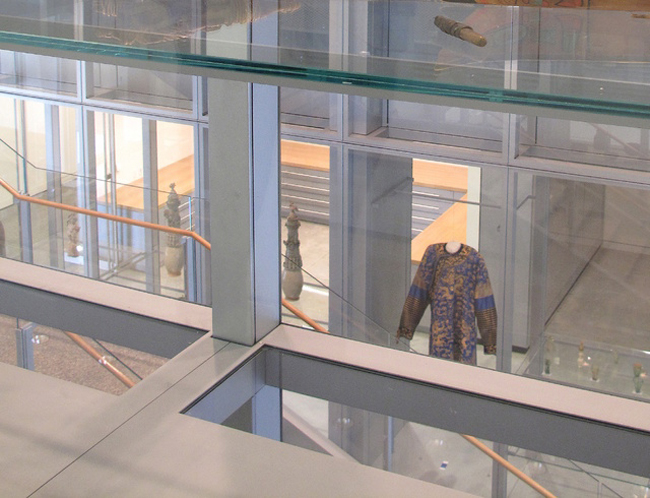 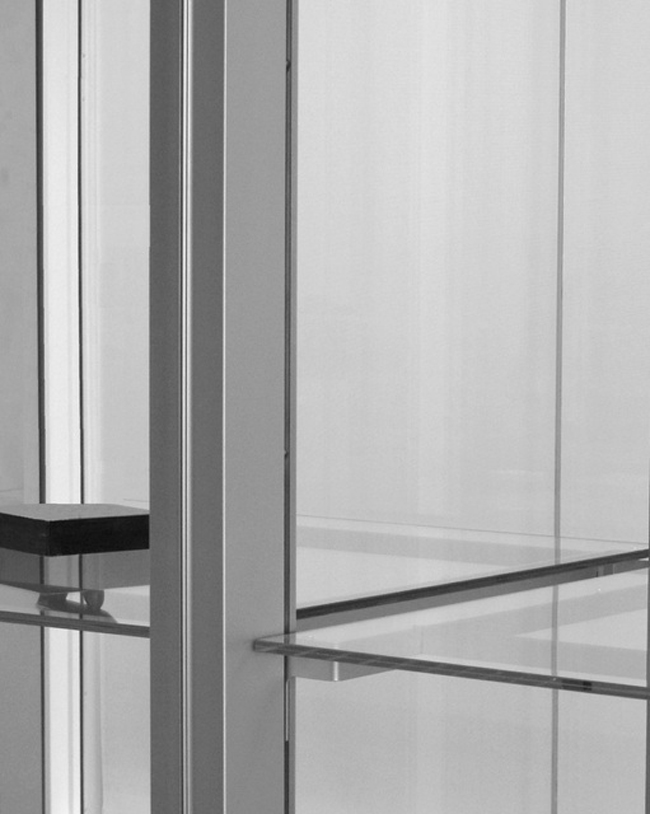 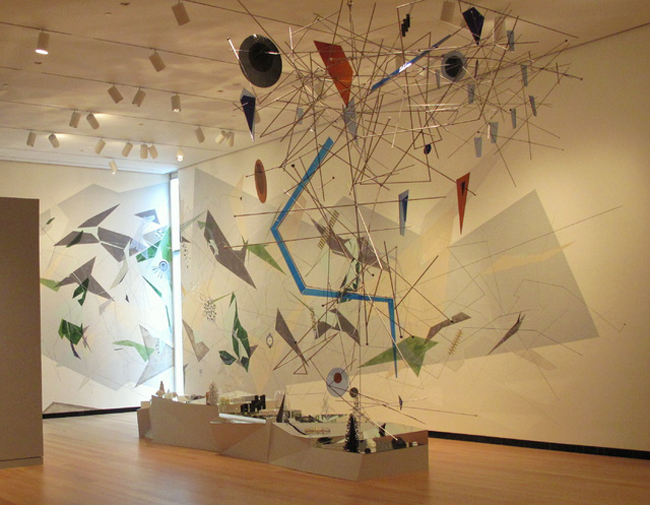 Overall view of main room , with model and hanging mobile 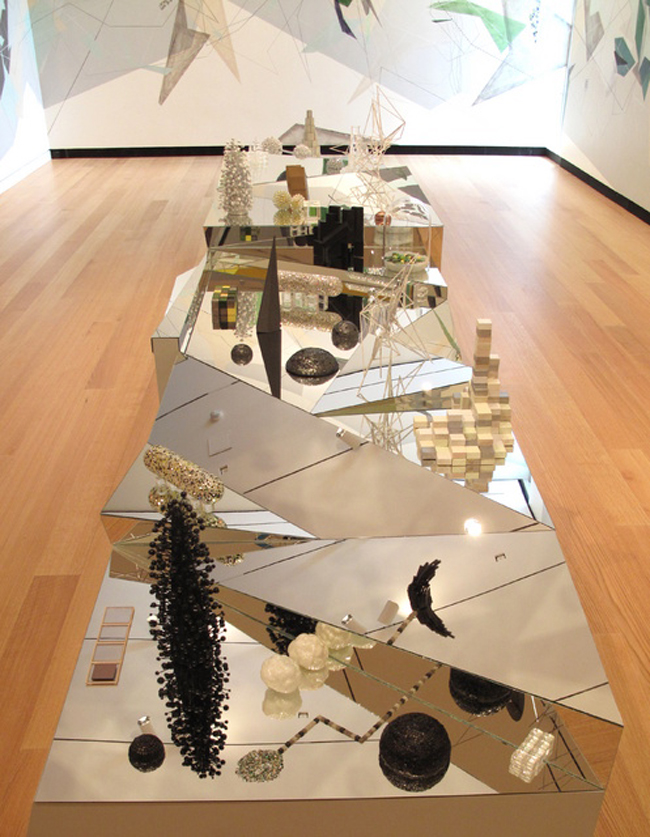 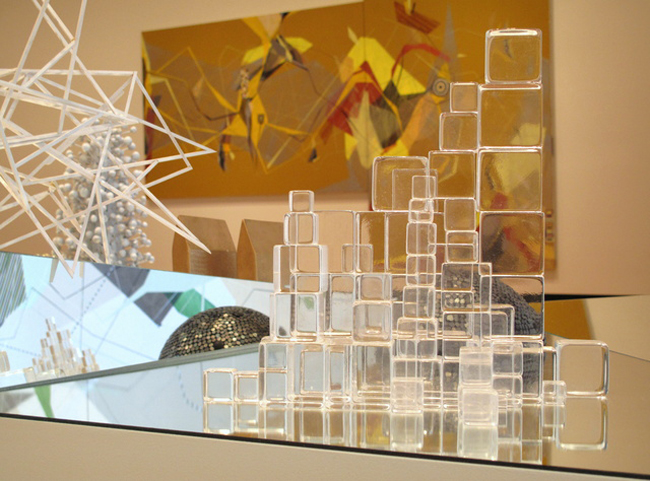 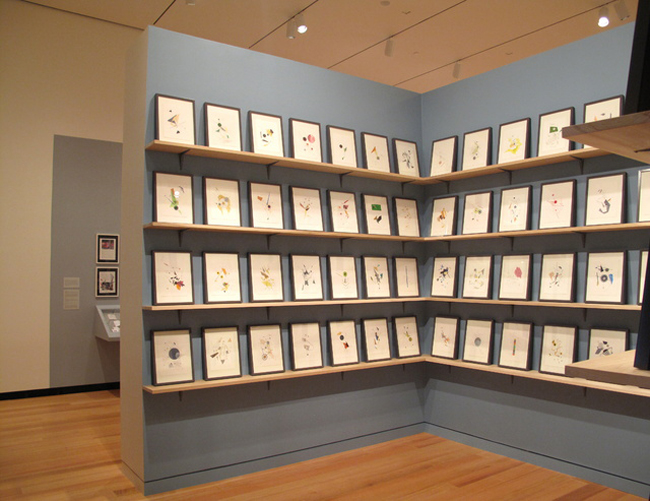 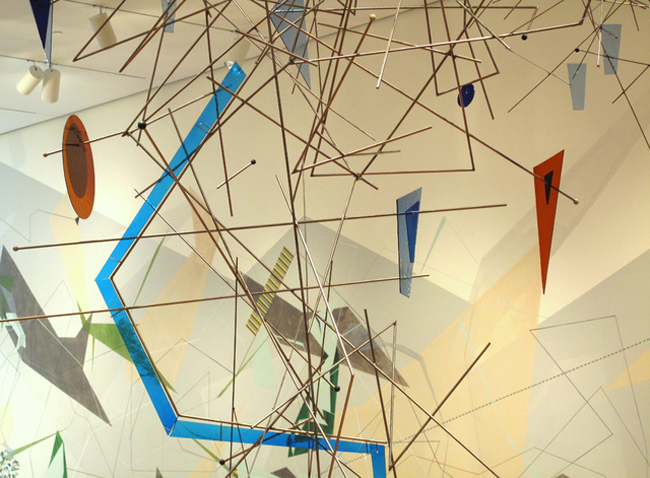 DannielleExtendedHQ from Metropolis Magazine on Vimeo.

Through July 28th at: