Behind the Scenes at Salone Satellite

It had been five minutes and still I could hardly breathe. The Alps were right there, outside the airplane’s windows and they were spectacular. When I finally resumed breathing—the turbulence also played a role in my bated breath—it occurred to me that here we were, three Americans setting siege upon Italy in hopes of staking […]

By: Bradley Bowers and Alejandro Figueredo

It had been five minutes and still I could hardly breathe. The Alps were right there, outside the airplane’s windows and they were spectacular. When I finally resumed breathing—the turbulence also played a role in my bated breath—it occurred to me that here we were, three Americans setting siege upon Italy in hopes of staking some claim in the Mecca of Design. And like Hannibal, the African General, before us who crossed these same mountains, we hoped our journey would prove fruitful.

The pace of Milan is Southern, to say the least. People move fastest when they’re trying to make it to the head of the queue to place an order for lunch or espresso. Ladies walk their dogs—often times neglecting to scoop the poop—at a leisurely pace, even the wind seems to turn corners with care. It was Milan for certain, but it felt like home, after being gone for a while.

Upon arriving we dropped our luggage at our hotel in the Navigli District, a quaint little area with a hip/underground vibe, and with no time to rest, descended into the Milan metro. Everything shined with an awe-striking glow; reality hadn’t quite set in: We were really on our way to stake our claim as bona-fide Designers, at the Salone Satelllite. 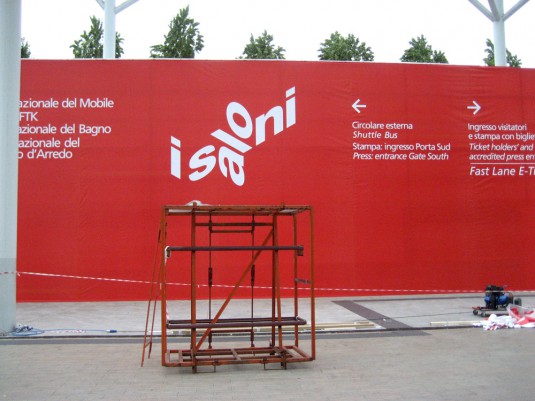 When we finally arrived at the Fiera Milano we would find that the true wonder of the Satellite is behind the scenes. We had to unload our crates, arrange our space, and polish the details, and because of this our studio was granted access to all areas associated with the Salone. 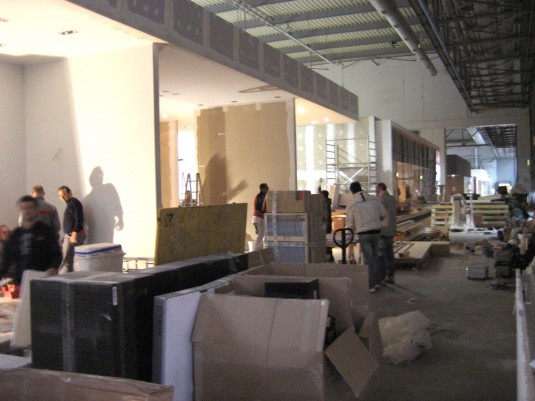 This was the magic of the event, seeing how the nuts and bolts of this behemoth of commerce work. It was the proverbial “pulling back of the curtain,” only this time we weren’t in Oz, but Milan and behind this curtain sits Marva Griffin, a woman who can only be described as regal and memorable.  She founded the Satellite 15 years ago and has run it ever since. Because of her, millions of people, every year, are treated to a show that is like no other.

There were workers and carpenters, baristas and security guards, designers and contractors scurrying this way and that way working tirelessly to make sure that this show would be more awesome than the last. I was worried that this was too much to ask. How could all of this be finished in three days? 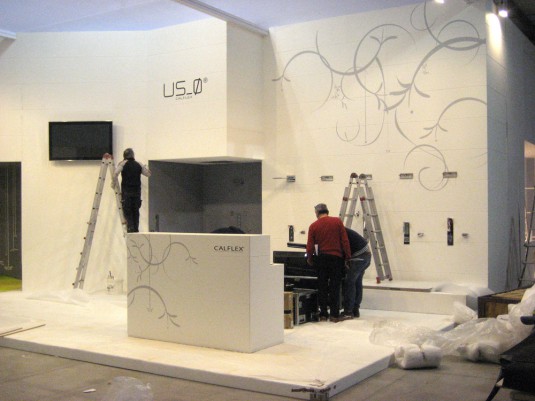 But Marva Griffin would stand assured: Three days to wrap up the preparation for the world’s largest furniture exposition was more than enough time. She was right.  Spaces were literally being erected one atop the other. Products were being shipped from all around the globe, needing to arrive at just the precise moment in order to make it to their destination as scheduled. The margin for error was so small that a 10-minute delay with a shipping truck would mean two days’ of lost work. 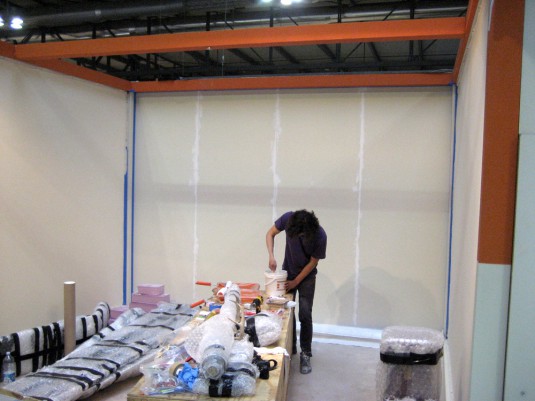 So we went to work. Any of expectation’s glow that remained on us was quickly dulled by the labor required to put on the show. Alejandro had to figure out the mounting system for his lamps, Gira and Ligna. Matt, the third member of PLZ DNT TCH, was debating the mounting system for his piece, Ante, while I filled in wherever help was needed—none of my work required any structural setup. And all around us our neighbors followed suit. But it wasn’t always cupcakes and lollipops: There was a designer from China, three booths down from us, whose crate was stuck in customs. He, of course, wouldn’t find this out until after he’d constructed his entire space and peeled back the last piece of his studio nametag: Utopia Design/Peng Wang. The irony was not lost on me.

Even amidst the delayed arrival of shipping crates, misrepresented booth colors—we designed our space expecting a Ferrari red, only to arrive and at a booth trimmed in Tangerine—disgruntled Salone officials and the usual chaos associated with large scale performances like this one, one thing made it all worthwhile: We were showing at the Salone Satellite.

Within the first few days we received visits from manufacturers, trend analysts, and retailers, private patrons and designers. Some of them loved the contemporary nature of my piece, Shell—the infamous fiberglass creation. Some loved the delicate nature of Alejandro’s lamp, Gira. Some loved the tongue-in-cheek concept behind Matt’s pieces named, Ante. We would spark relationships with Abitare magazine; Poliform would ask about collaboration; Organoid, a start-up out of Germany, wanted to embark on some new product concepts. A Japanese television crew would shoot a segment about the Shell, in our booth. And Mr. Giulio Capellini himself would come to our booth, intrigued and interested in moving forward with our studio.

All of the arguments, all of the hard-edged drama and the sleepless nights became small stuff. We were in Milan. This is what it was all for, this is why we endured and persevered. By the time the Salone would begin to slow down we would have accumulated boutiques for representation, architects who want to collaborate, designers that wanted to buy, patrons that thought we were crazy but in a good way. But most importantly we, as young designers, would become more confident in our ability to be relevant and worthy.

For all the Satellite’s wonder and amazement, it was not alone in helping shape our view of how fantastic the world can be if you just step outside your door and invite yourself to wander and get lost—which the crooked and meandering streets of Milan are perfect for.

On one of our expeditions, weary from trekking for a few hours—only to realize we’d just walked a few blocks—we stopped into a small pizza shop, at 14 Corso San Gottardo, named MiPi. It looked interesting from the sidewalk and it was a pizzeria and we were hungry, so in we went. Rusty with Italian and uncertain of how this whole ordering food in Milan-thing worked, we started in broken phrases: …excuse…una pizza…no cheese…si si si…any drinks, then finally a young curly haired man, whom we would come to know as Valerio, the owner/manager, would break into perfectly accented English. This was a relief but also a challenge; we wanted to be able to be truly in Italy, language and all. So we would come to MiPi everyday and try our hand at ordering only in Italian.

But I wonder as I write this, why did we choose MiPi? Why did we come back? Why do we like Valerio so much? One answer: Design. Valerio and his crew are all designers. The space within MiPi is rustic and contemporary—iPads are fastened to old barn doors—without seeming constricted. This is what can change the world, young minds with fresh ideas; this is why we all bonded with Valerio, because he was like us–young, excited, and crazy enough to follow through with his ideas! We wish Valerio and MiPi all the best, and their Classic Calzone truly is remarkable! We would find these types of people sprinkled here and there.

There was FUGU, a small design group from France that would become our Salone Buddies. Marita Franceson, our immediate neighbor made the long days better, with her hot pink feather boas and her sneaky photo-shoots. By the end of the Satellite we would have formed our Design Family, people that we never knew existed and bonds that we know will never break. The future of the World and the future of Design rest in the hands of the group; problems can no longer be solved in solitude. Solitary thinking creates one-dimensional solutions and humanity can no longer afford such flawed approaches. 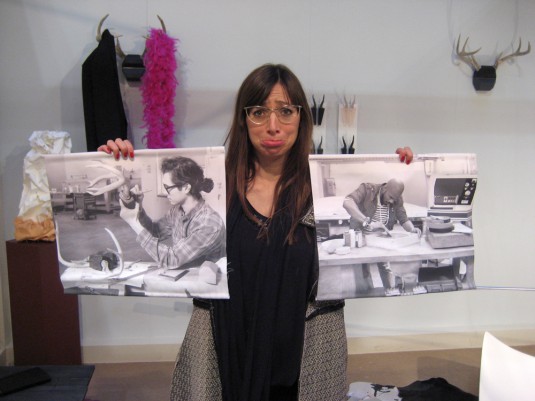 When we finally return to Savannah—I am sitting in the airport on my way to Amsterdam then Savannah—we have a lot of work to do. We have to meet orders from patrons and retailers. We have to send out press kits, and follow up with trend analysts and bloggers, but most of all do everything that we can to stay hungry, foolish, and determined. Everyday of this amazing trip has made me glad.

Before leaving Savannah I was talking with Mrs. Wilson, a bus driver in Savannah, telling her that I was leaving for Milan, and that I hoped to bring her some good news back.

Bradley Bowers is a designer who likes to say, “I am glad that the world offers itself with no bias and with open arms. Every object is a souvenir of some journey, some bygone experience.”

Alejandro Figueredo was born in Caracas, Venezuela. He started his design career at the Polytechnic University of Puerto Rico, studying architecture; he went on to continue his studies in industrial design at the Savannah College of Art and Design.