Photo: Benoit Pailley, courtesy the New Museum.Rem Koolhaas has a knack for coining words, a skill evident in the name of his and his architecture firm OMA’s current show at New York City’s New Museum:  “Cronocaos”. Catchy and primitive at once, the title drops the “h” from “chronos” and “chaos” respectively.  It’s a classic Koolhaasian […]

Rem Koolhaas has a knack for coining words, a skill evident in the name of his and his architecture firm OMA’s current show at New York City’s New Museum:  “Cronocaos”. Catchy and primitive at once, the title drops the “h” from “chronos” and “chaos” respectively.  It’s a classic Koolhaasian move, visually and viscerally dramatizing the notion of a world confused about the relation of past to present and what this means for architecture—particularly for preservation.  “Architects—we who change the world—have been oblivious or hostile to the manifestations of preservation,” Koolhaas writes.  The result, he argues, is that an already large and ever-increasing part of the globe displays the same bad sort of preservation:  commoditized, sanitized, and individualized.  In turn, buildings and the life they sustain suffer, even as “preservation does not quite know what to do with its new empire.”

Enter Koolhaas, who purports to stand outside this empire.  He takes aim at the preservation industry and its use of history, leading us on a tour of ideas that ultimately promotes the work of OMA instead.  Preservation done right is thus what Koolhaas claims to offer, and a “‘unified field’ theory” is where he says preservation should begin.  But as viewers wend their way through “Cronocaos” they are apt to find a manner of gallery prospectus that raises as many questions as it answers.  Whether Koolhaas operates apart from preservation’s “new empire” remains open to debate. 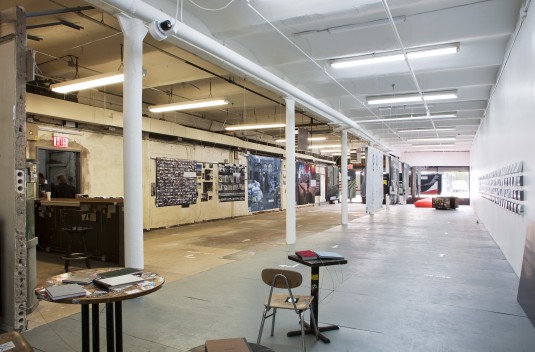 Originally commissioned for the 2010 Venice Architecture Biennale, “Cronocaos” has been installed in the former first-floor space of the Da Roma Restaurant Equipment company at 231 Bowery, adjacent to the New Museum proper (it runs through June 5).  Half of the gallery space has been “‘preserved’ as it was while inhabited by the restaurant supply store” (reports the exhibit’s website), while the other half has been “minimally renovated,” an arrangement meant to represent the broader dialectic of preservation and change to which Koolhaas draws our attention once we step inside.  The presentation itself largely resembles that of an extended poster session, as sequentially numbered visuals hang before our eyes in an assortment of guises.  We encounter forty or so maps, charts, photographs, and other reproductions on which are printed all kinds of facts and figures, quotations, and observations from Koolhaas himself.  There is at times a frenzy of information, though no amount of assembled data seems sufficient to resolving the tensions at play.

The problem has only a little to do with the oddity of gathering and then showing disembodied objects in an exhibition that criticizes preservation for essentially doing the same.  We may find pews, one from the Bowery Mission and the other from CBGB, on opposite ends of this space, but we can agree not to dwell on any hypothetical trajectory between the sacred and the secular, nor to wonder at the choice to slap a “Cronocaos” sticker onto that original object of punk rock opposition, the CBGB pew, presumably for the sole purposes of this show. 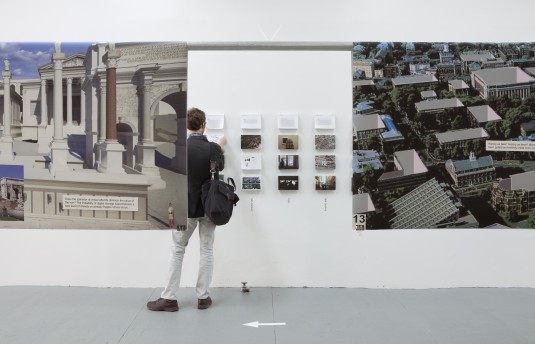 The bigger problem here is conceptual, starting with the lack of a definition for “preservation” itself.   On the one hand, for example, we learn that “Preservation’s continuing emphasis on the exceptional—that which deserves preservation—creates its own distortion.  The exceptional becomes the norm.  There are no plans for preserving the mediocre, the generic.”  Yet, on the other hand, we are instructed that “an average example of a type of building” qualifies as “Insignificant Universal Junk” (IUJ), a play on UNESCO’s idea of sites of “Outstanding Universal Value” (OUV), and that it thereby belongs to a class of “artifacts that ought to disappear, to make room for new development.”

Still elsewhere “development” is exactly what bothers Koolhaas, proceeding hand in hand with “preservation” and requiring intervention.  The historical timing of this critique is curious, for precisely as a growing part of the non-Western world seeks its own path to “development” through the making and marketing of “heritage”—a point the show documents—Koolhaas issues his injunction.  Likewise the previous work of OMA is in need of some finessing.  Consider the firm’s Prada Epicenter in Soho, New York, a project that Koolhaas acknowledges might be seen as “Part of the Problem.”  His response is basically that OMA’s design “introduc[es] new typologies to the exclusive boutique:  public space, gallery, and performance space. … The store thus becomes a venue for film screenings, performances, and lectures – a hybrid space redolent of the improvisation and unpredictability that once characterized the neighborhood.”  The “Inventory of Objects” posted near the entrance to the exhibit puts it another way in its abbreviated style:  “The transformation of a former museum space into a luxury fashion store capable of cultural programming.”  All of which sounds appealing, yet an online check of the Prada website discloses only two New York events held in 2008 and another two filed in the “Archive” for the year before.  What would Koolhaas the utopian make of this?

To be sure, “Cronocaos” is perceptive, provocative, entertaining.  Amidst recent pressures to tear down  varied examples of historic modern architecture, Koolhaas is especially persuasive about the “global rage to eliminate the evidence of the post-World War II period of architecture as a social project,” and if one is willing to do some additional research, the exhibit can be made to elicit unexpected thematic connections, like that between Yellowstone and Harvard—the former designated a “biosphere reserve” by UNESCO’s Man and Biosphere (MAB) Programme in 1976, the latter home to its own Office for Sustainability created in 2008.

But there is in the end something almost mythical about the way that Koolhaas writes.  We are nearing “a climax of preservation,” and “tendencies” are “propelling us into a period of CRONOCAOS.”  What this means specifically in 2011 is left to us, the viewers, to surmise.  No doubt preservation presently demands our attention for any number of critical reasons, the attempt to minimize the enormous embodied energy of our buildings for the future being just one.  Yet the style of “Cronocaos” is rather more that of the sweeping view, even the retrospect, like that offered by Koolhaas in his Delirious New York over thirty years ago.  At that time, the postmodernism debates were just beginning to make their way to this side of the Atlantic, gathering force for the next two decades before  receding into the past.  However dated those debates may now seem, it is hard to avoid the conclusion that we did indeed enter some significant posterior age, one encompassing preservation too, outside of which even Rem Koolhaas and his associates cannot stand.

James Kessenides, PhD, is a New York-based writer and independent scholar at work on a book called Before Hollywood:  A Prehistory of Los Angeles.

Cronocaos is on view at the New Museum, New York, until June 5.