District Hall is the first building of its kind: a civic center at the heart of an innovation hub. 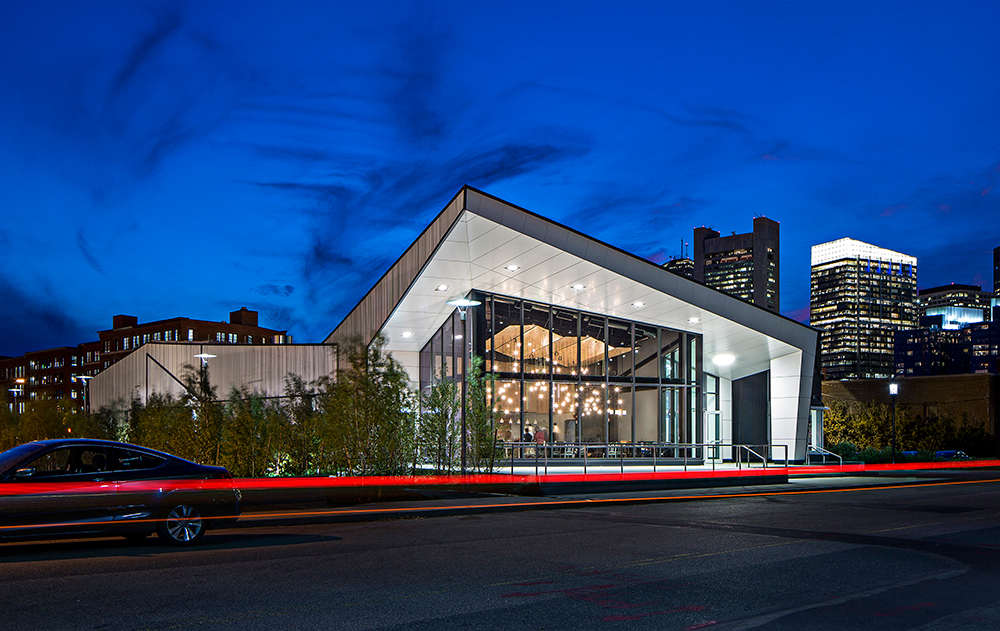 Few buildings hit their targets as swiftly—or as satisfactorily—as Boston’s District Hall has. Techies and budding entrepreneurs were sketching ﬂow charts on the space’s write-able walls days after it opened last October. Venture capitalists and construction workers were swapping battle stories at Gather and Brew, District Hall’s restaurant and café. “This building was created to help foster the identity of the community that is emerging here on the waterfront,” says David Hacin, whose ﬁrm, Hacin + Associates, designed the building and its restaurants.

Financed and built by Boston Global Investors (BGI) in partnership with Morgan Stanley, District Hall is intended to anchor Seaport Square, a 23-acre development along the South Boston waterfront—the city’s newest and most dynamic urban offshoot. Over the past decade, the once-decrepit collage of ﬁshing piers and parking lots has welcomed numerous corporate tenants: banks, hotels, and upscale restaurants, along with the Institute of Contemporary Art and the city’s new convention center. 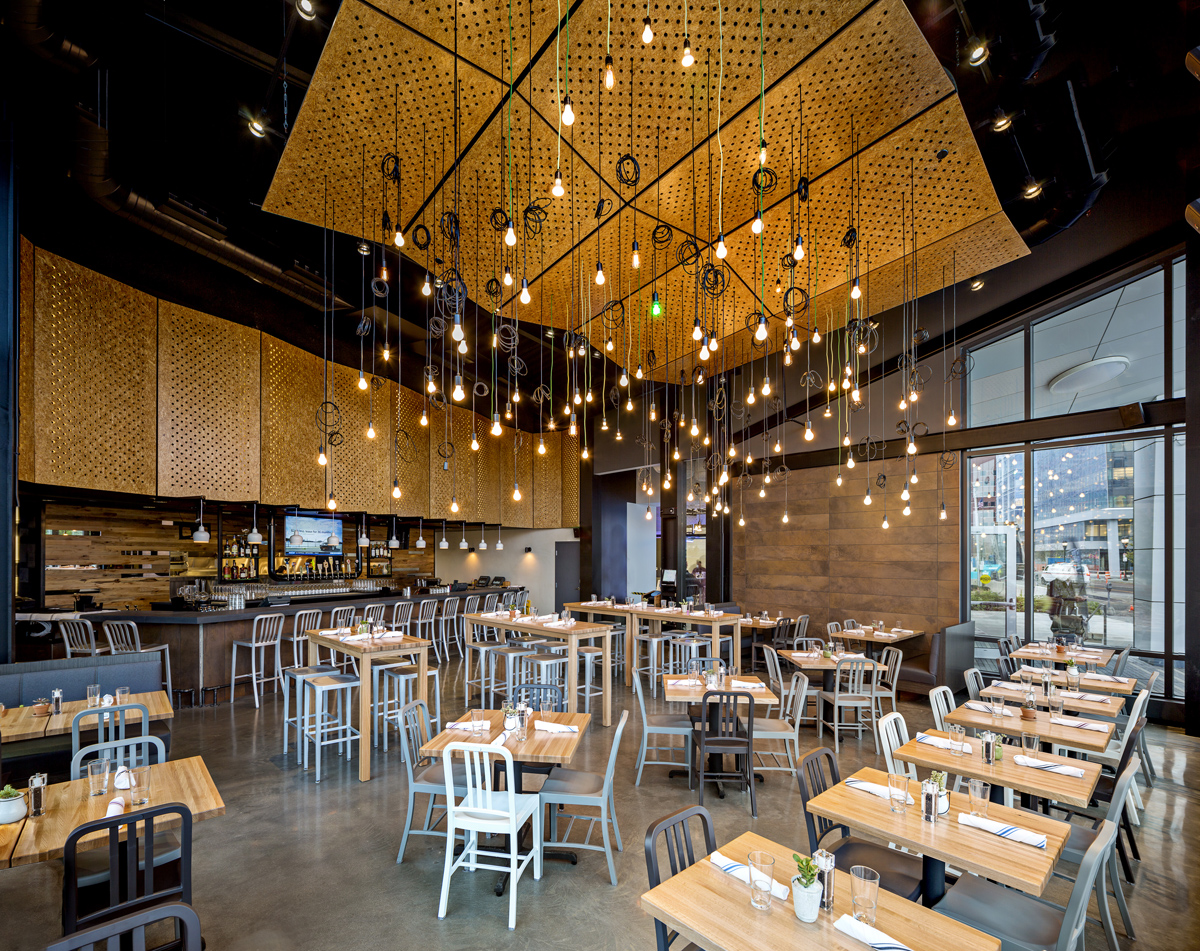 Still, despite, or perhaps because of, the frenetic construction, the area lacked a distinct identity. In 2010, Mayor Thomas Menino redubbed it “The Innovation District” in the hopes of enticing tech ﬁrms to settle there. The announcement was met with some skepticism until Vertex Pharmaceuticals announced its plans to relocate its entire Cambridge workforce to Menino’s newly branded 100-acre colony by mid-2014. More migrations followed. When BGI was awarded its parcel, part of the prescribed remediation included a civic space—an urban laboratory where innovators could meet informally to exchange ideas. “The city of Boston was asking for a building whose use and outcome weren’t entirely clear,” Hacin says. “I think it was a very courageous thing to do.” 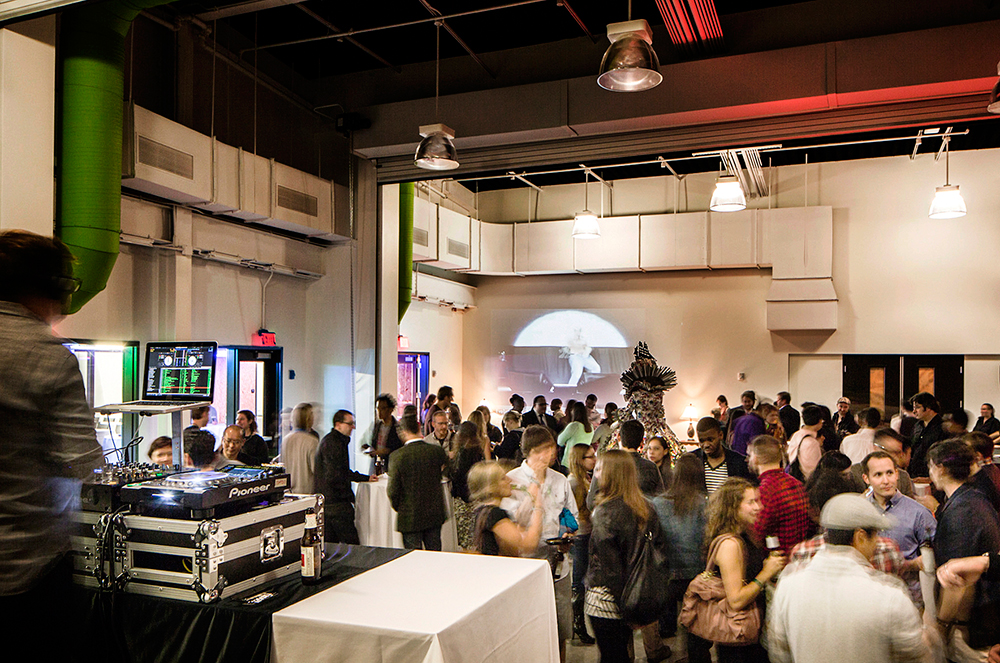 Equally popular for its restaurant, visible in the building’s facade (top), and for its function rooms (above), District Hall is fast becoming the core of Boston’s Innovation District.

District Hall is 12,000 square feet of public space—a corridor leading from a waterfront park to a (soon-to-be-built) subway entrance. Aesthetically, the single-story angular shell evokes the warehouses and rail yards that once deﬁned the area. Its main volume, an atrium-like hall, houses a dozen broad tables and writeable wall surfaces. There is a 250-seat meeting room, easily divided into thirds. Across a walkway colored by a Philips Color Kinetics light installation stand three function rooms that can host meetings or be ﬁtted out for pop-up retail. “We had many different partners during the course of this project,” Hacin adds. “As a result, we needed to keep the building open to a range of potential uses.”

Best known for carving contemporary residences and ofﬁces out of historical buildings, the Swiss-born Hacin welcomed the opportunity to design a freestanding building in a rapidly evolving neighborhood. “I love history,” he admits. “But for once it was great to be making our own context.” 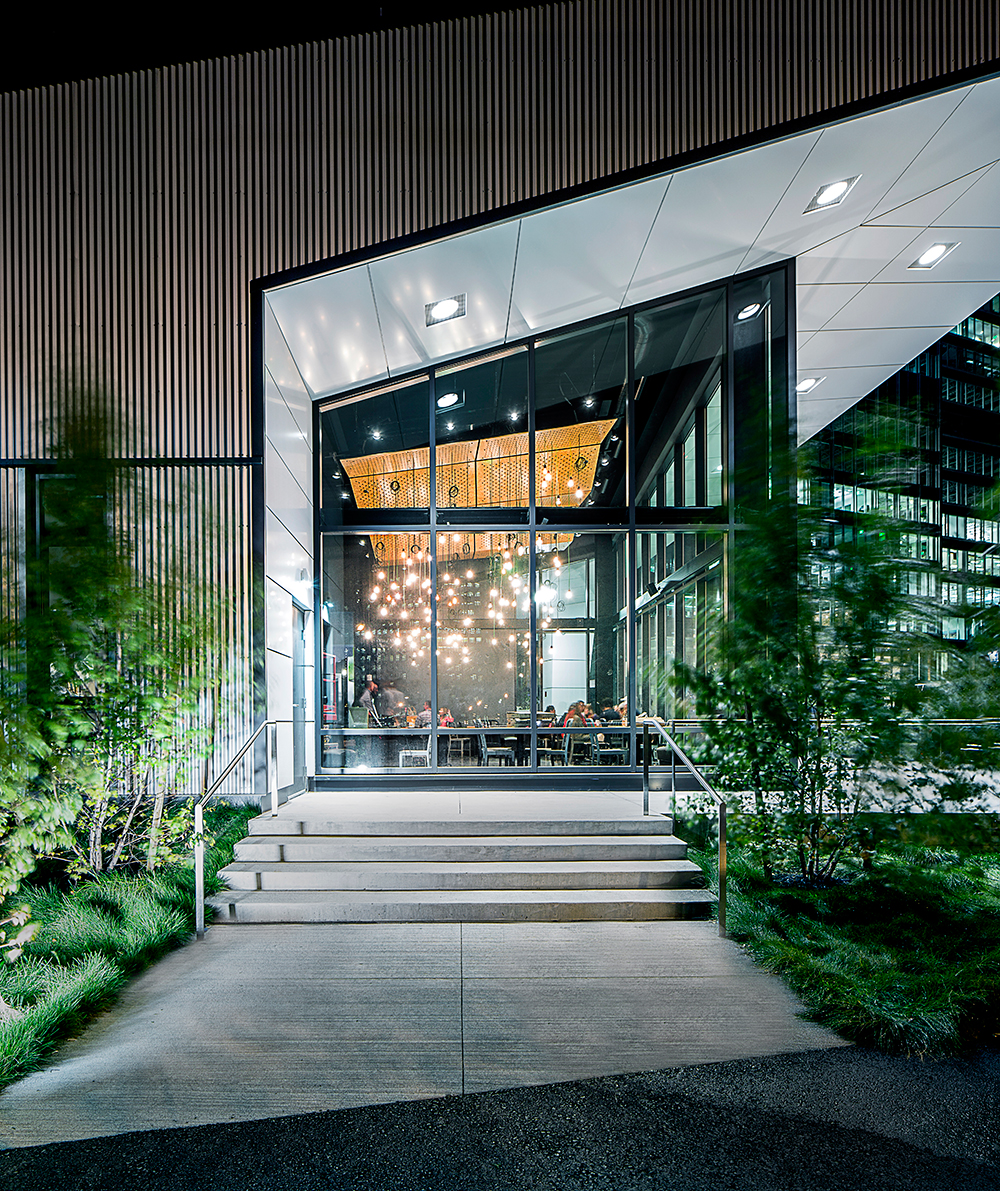 Boston’s Innovation District needed a public building to bring the tech community together. David Hacin’s solution has great spaces for working and socializing, such as the bright and bustling restaurant Gather.