Superbowl might attract North America’s largest TV audience, but the biggest sporting event is still World Cup Soccer. Like the Olympics, they happen only every four years, and involve massive logistics. What does this mean to the hosting countries? There’s no time to waste in getting the venues ready. This is just what’s happening in Brazil, the country hosting the 2014 World Cup. An exhibit in New York,  “Brazil + 2014: Sustainable Stadiums,” shows that Brazilians are hard at work to build spectacular buildings that are also sustainable. Brazil and soccer are inextricably linked. The country can boast of being the home to legendary players and winning an unparalleled five championships. Now it will, once more, try to make history by making 2014 the greenest, most sustainable World Cup ever. To that end, the architects of the stadiums are putting forth their best creative efforts to make their buildings as functional and iconic as they will be eco-friendly. 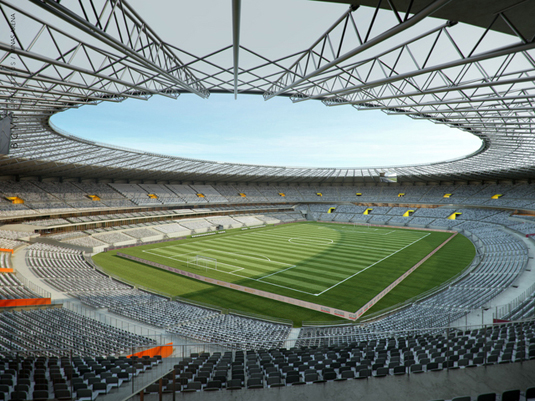 Scattered throughout the country, in 12 cities, the stadiums are a mixture of new structures and comprehensive renovations of existing ones. One thing connects them all: the push to make sustainability taken to its highest standard, from traffic logistics to the smart use of water. All strive to deliver buildings that are in keeping with the country’s strong architecture heritage. Incidentally, among the well-known projects in the show, the Mineirao Stadium, is a renovation of a stadium adjacent to Oscar Niemeyer’s  early seminal project, the Pampulha Complex in the city of Belo Horizonte. 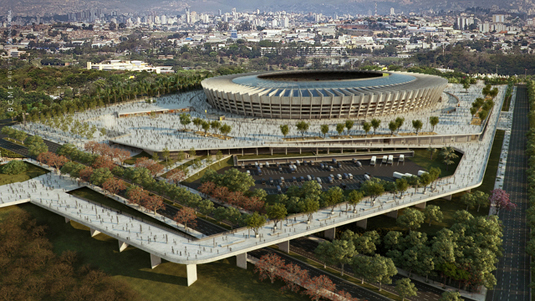 The Mineirao, as it’s known, is a Brutalist structure designed in 1945 by Eduardo Mendes Guimaraes. The building is now protected as a historic landmark, thus its main shell cannot be altered. How, then, to make the massive concrete structure useful beyond the sporting events? 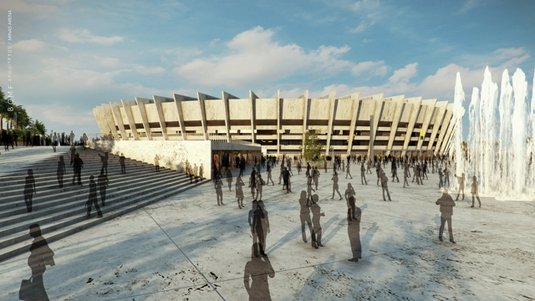 BCMF Arquitetos, the firm chosen for the project, has plenty of experience in sports architecture, having designed five venues for the 2007 PanAmerican Games in Brazil; the firm is also responsible for the master plan for the 2016 Rio de Janeiro Olympics. “It was a challenge to add over two million square feet of usable area to a building protected by landmark status,” Bruno Campos, principal of BCMF, told me. The concept was to turn the area that surrounds the Mineirao into a plaza, and use the underground space for shops, restaurants, and even a soccer museum. These amenities will be accessible both from the stadium and the street, giving the Mineirao an extended use, making the stadium part of the neighborhood’s daily life, as it will provide much needed services to the mostly a residential area. Adding to the sustainability of the venue, 7,000 solar panels will generate half of the building’s power needs and a reservoir of close to 1.6 million gallons will collect rainwater for reuse. Another highlight in the show is the brand new Arena Pernambuco. Located just outside Recife, among the most beautiful and under the radar cities of Northeast Brazil, this new stadium is designed and built for the World Cup. Like the Mineirao, it will also feature many non-sporting amenities and it’s expected to become a magnet for the surrounding neighborhood. Its designers, Fernandes Arquitetos Associados, are also designing other stadiums. They’re placing the bleachers in close proximity to the field, thus giving viewers the kind of intimate feel not usually found in similar venues. The exterior shell will be covered in the same fluorine based plastic material (ethylene tetrafluoroethylene, also known as EFTE) that gave the soft, cushiony look to Herzog & de Meuron’s Allianz Arena in Munich. But this arena will use a more sophisticated LED lighting system to produce dynamic color schemes. On the sustainable side, the arena will feature mostly natural ventilation and illumination, solar panels, rainwater re-use, and treated sewage disposal, and will conform to the sustainable standards set up by FIFA’s (Federation International of Football Association, the ruling soccer entity) Green Goal, introduced in 2005. Green Goal aims to monitor and reduce the environmental impact of the association’s activities and events. 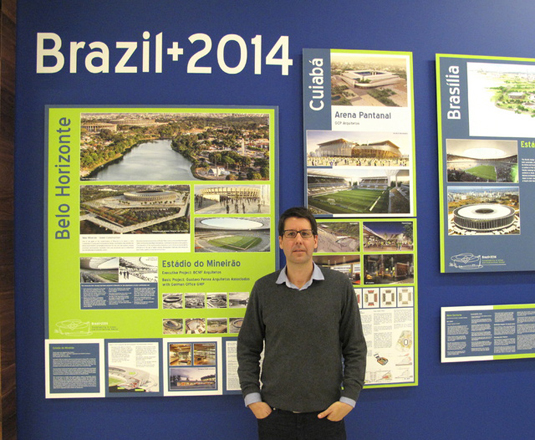 The show was organized and curated by Brazilian architect and promoter Denise Hochbaum as a follow-up to the successful symposium, “Brazil+2014 World Cup Architectural Summit,” held at the Center of Architecture in New York City in November 2010. “It is a remarkable moment in Brazilian history and makes for a very unique World Cup,” Hochbaum told me when I visited the exhibit last week. “The 12 arenas represented in the exhibit show the importance with which our whole country –states and cities–is devoting all its efforts and energy to make this a very special World Cup,” she added. 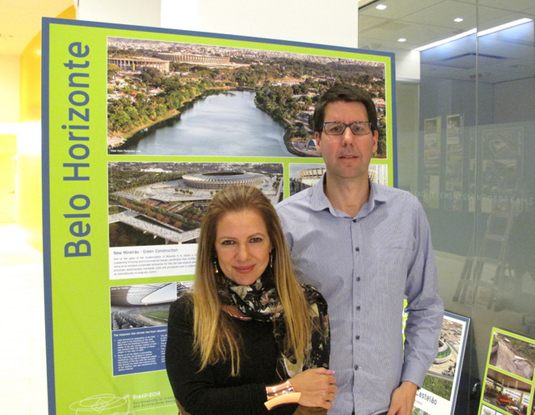 What excites Hochbaum the most in all these projects?  She says it’s the specific solutions found to resolve each venue: “There was intensive research behind the designs, with substantial innovations developed specifically to fit each site’s challenges.” Indeed, the exhibit shows that Brazilians are combining their famous resourcefulness and creativity with their special sense of architectural space, thereby creating structures that will leave a lasting legacy long after the last goal is scored. 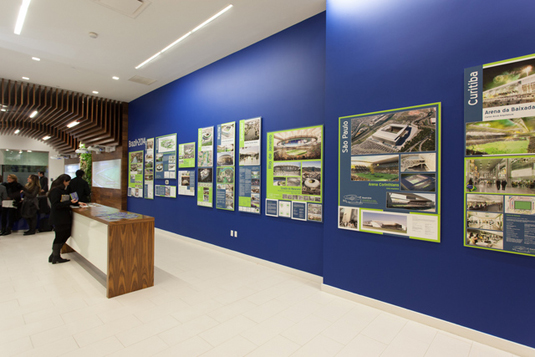 The exhibit, supported by the Ministry of Foreign Affairs/General Consulate of Brazil in New York is at the lounge of the Banco do Brasil branch in New York City until February 16th. Banco do Brasil, 11 w 42nd st, New York, New York, Monday through Friday, 9 am – 6 pm, and Saturday, 10 am – 5 pm. 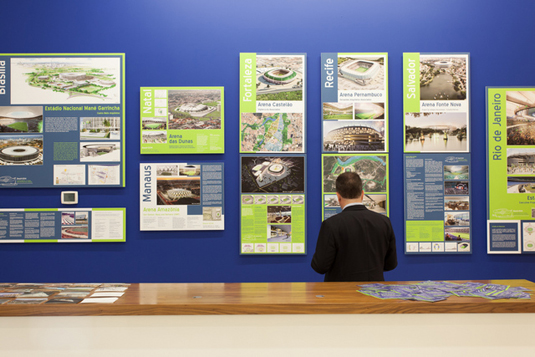