Why would someone pay to work round the clock for three straight days, toiling in makeshift workspaces on temporary installations? Thirty-two people enlisted to do just that in this year’s Common Boston Common Build. Some were drawn by the thrill of competition. Others came out of a desire to connect and contribute to community.  But […]

Why would someone pay to work round the clock for three straight days, toiling in makeshift workspaces on temporary installations? Thirty-two people enlisted to do just that in this year’s Common Boston Common Build. Some were drawn by the thrill of competition. Others came out of a desire to connect and contribute to community.  But CBCB offers competitors an opportunity beyond mere sweat and skill: the chance for anyone to be a “designer.” 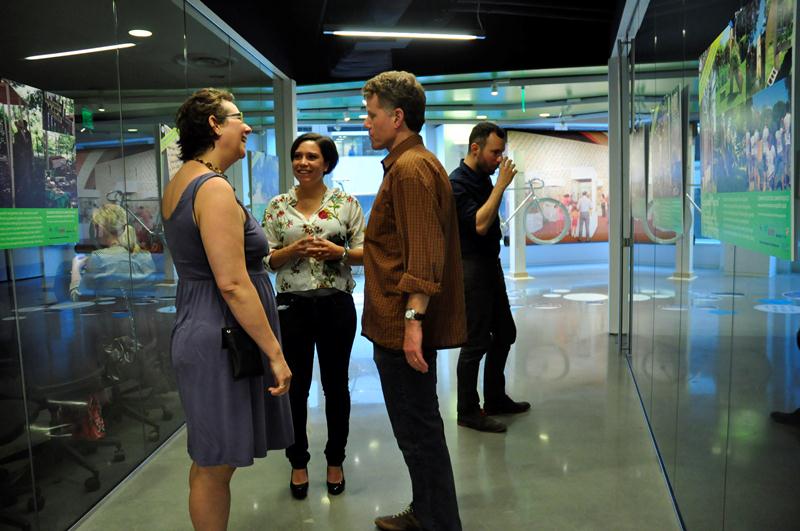 People of all backgrounds and experience levels participate in the competition, with results that showcase dynamic partnerships drawing on multiple disciplines. This year’s “Neighbors” team included graphic designers, engineers, carpenters, and aspiring business school students. Their project, a series of iconic V-shaped structures, vied for first place. Brian Jaffe, a new admit to MITs Sloan School of Business, joined the team on his first weekend in Boston; at the CBCB Awards Ceremony, he confessed that his second weekend in the city couldn’t possibly measure up. 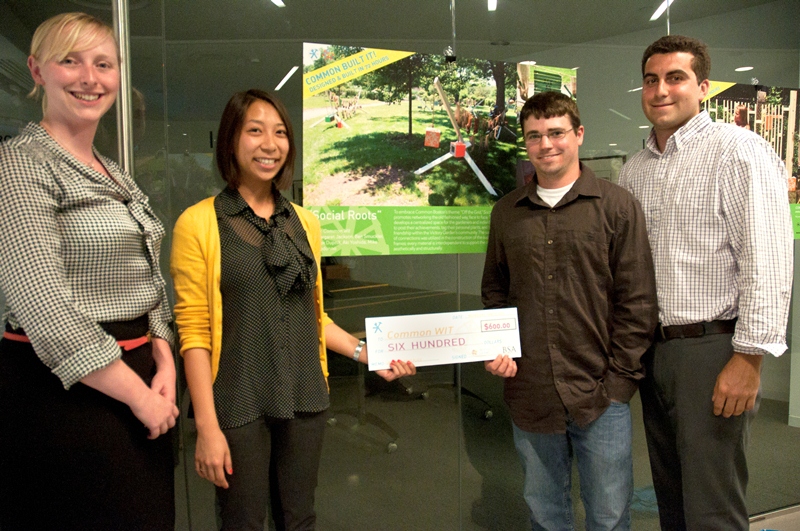 The first place Common WIT team with its winnings

At CBCB, the competition isn’t about drawings; the works are realized in short time, in a variety of materials and methods and forms.  “CBCB gives you a chance to break away from the daily routine,” says Laura Herbert, a 2011 participant and longtime organizer for Common Build. “It gives you a chance to get your hands dirty.” The contest also gives teams a chance to witness the impact of their work. Completed projects sited at the main entrance to the  Fenway Victory Gardens drew visitors in, just as they were designed to do. One juror remarked that he might not even have found the site without them.  CBCB also requires participants to stretch. Some projects may end up a little rough—first and welcome attempts at bringing an original idea to life. “My favorite part of the weekend was the hands-on work,” says Aki Yoshida, a member of the First Place team Common WIT. “Seeing something that was just in our heads come together in front of us.” 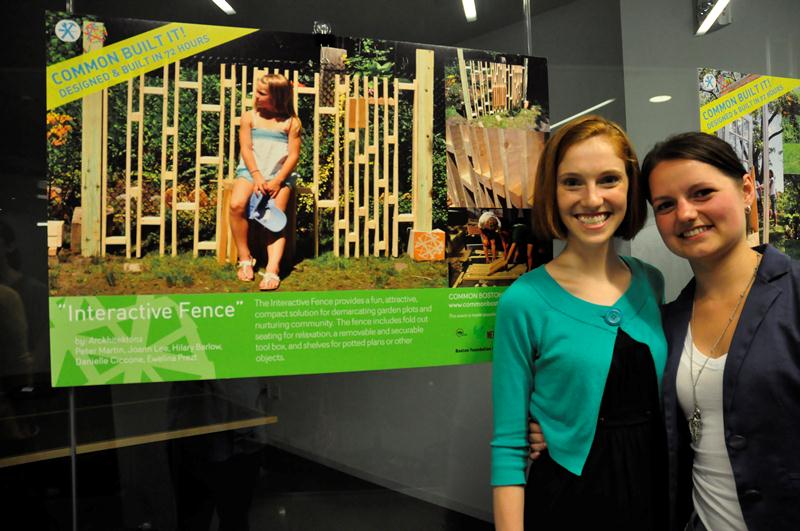 In addition to the accelerated design-build experience, CBCB requires active and immediate community engagement. All of this year’s teams spent significant time with the Fenway’s gardeners, gleaning information, opinions, and ideas. “We learned how to cut roses and grow sunflower seeds from the gardeners,” says Margaret Jackson, team captain of Common WIT. “It was a very pleasant surprise to see how invested this community was in our work.” The community investment was visible in the team’s first place “Social Roots” project, a real life social media space where gardeners could exchange ideas, seedlings, or simply socialize—activities that the existing spaces did not foster. 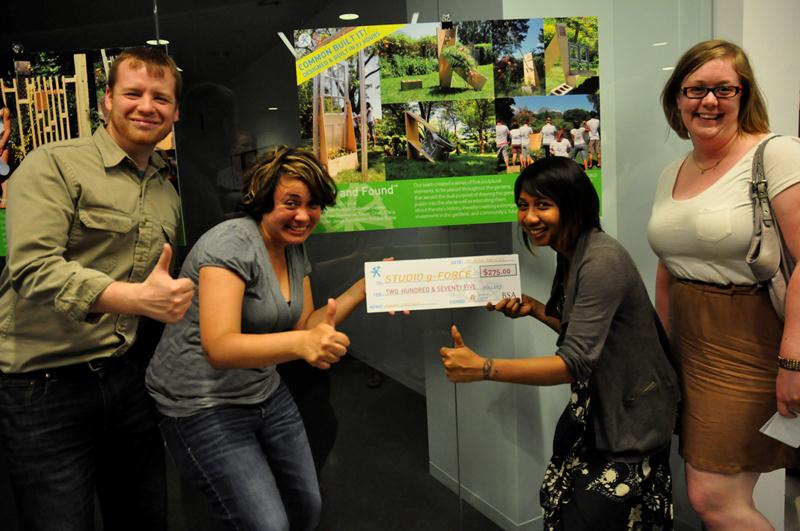 Enthusiastic Studio G-Force in front of their thirde place work: “Lost and Found”

Inspired by the happy outcomes, many jurors joked about forming a team for next year’s competition; they too wanted a chance to have a direct and positive impact on a community—an opportunity not always offered to designers. “This competition highlights the need to involve designers at the very outset of a project,” says juror Peter Kuttner, President of Cambridge Seven Associates.  “Our creativity and perception can be a powerful community tool.” 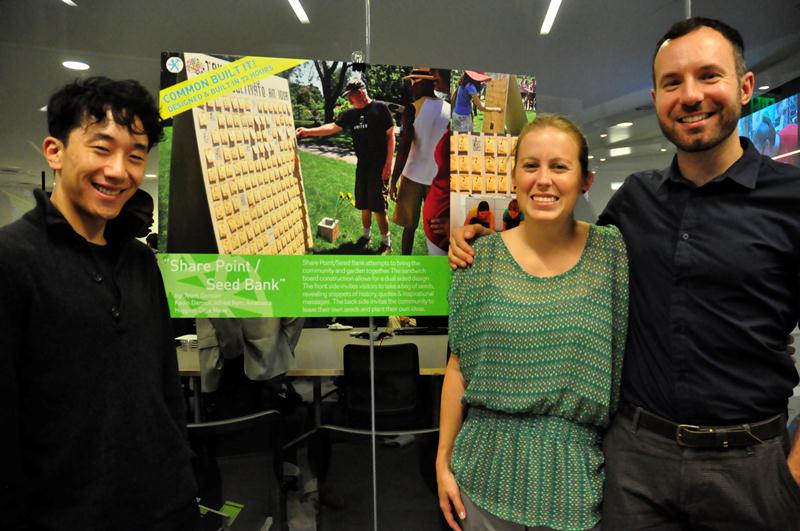 No one walks away from CBCB with a stash of cash; prizes are modest, but the rewards are plenty—insightful designs realized under duress with great skill, and a richness of ideas exchanged. But will the effect endure after the CBCB installations are dismantled at the conclusion of the Common Boston festival? It will if the FVG community retains the lessons, and continues to advocate for a permanent change within their park. All six of this year’s teams brought their “A” game to the competition, with projects ranging from the poetic to the pragmatic. We congratulate our team this year (as well as honor CBCB Alumni) for fulfilling the mission of the competition: to show how innovative solutions can alter the way we interact with the built environment, even when these solutions are realized in 72 hours. 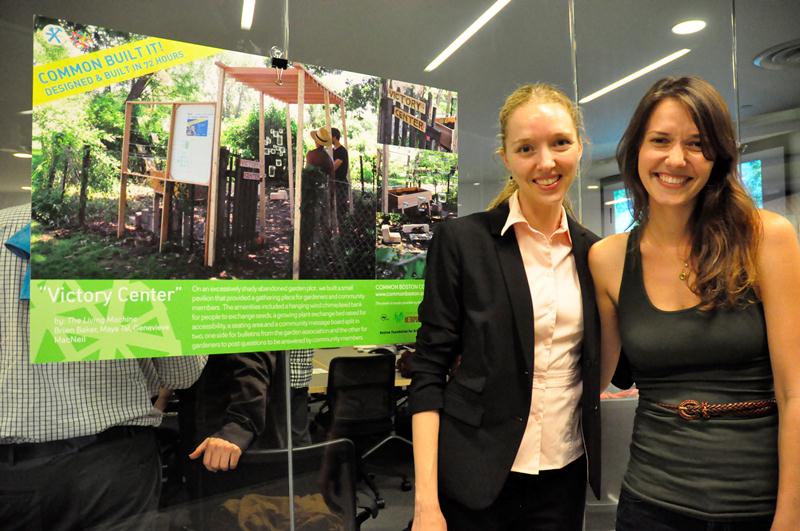 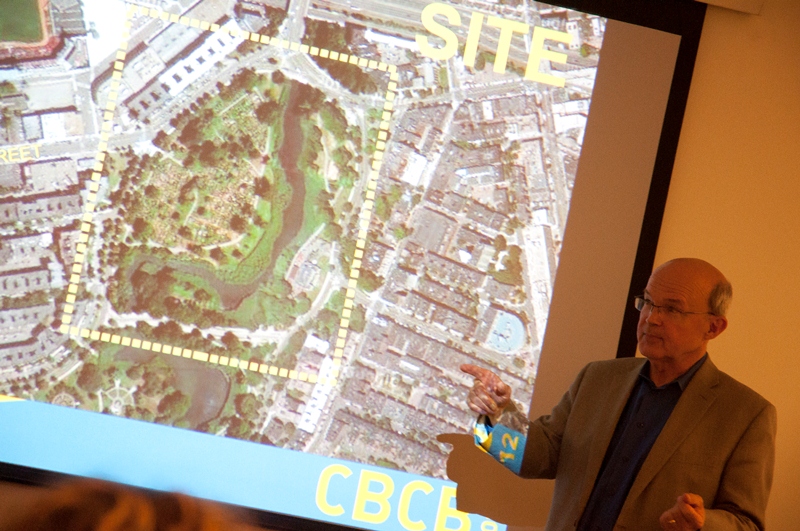 Valerie Fontana Shulman acted as 2012 CBCB Planning Director and has been involved with the Common Boston since 2009. She is an Intern Architect at Carr Lynch and Sandell, Inc. in Cambridge, Massachusetts.