Designing and Building a Pavilion: VIII

Painted sheets ready for assemblyAssembling the wall and roof panels is the most important production phase and the critical test of our design and methodology. It is also labor intensive and logistically complex.We knew that the internal organization of the Art and Architecture Building could not support the assembly and transport of our largest panels, […]

Assembling the wall and roof panels is the most important production phase and the critical test of our design and methodology. It is also labor intensive and logistically complex.

We knew that the internal organization of the Art and Architecture Building could not support the assembly and transport of our largest panels, so we commandeered the newer loading dock area of the adjacent Loria Center, the stairwells, and the building’s utility yard for assembly work and temporary storage. Staging and sorting parts for assembly is located in the Rudolph Hall sub-basement service corridor. The components of each panel are sequenced, starting with the first panels needed on site. 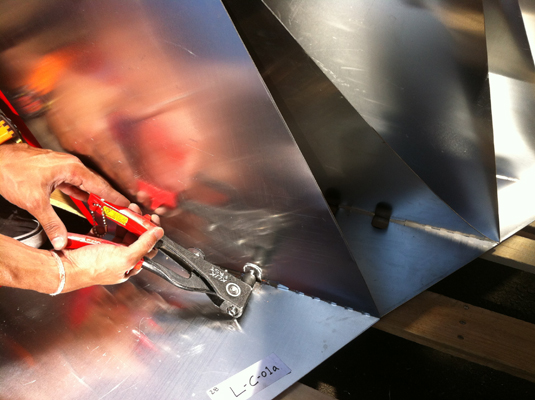 Starting with a base plate, each successive layer of “corrugation” is folded and slotted into place. Horizontal plates with slots and corrugated plates with corresponding tabs are then fitted and stacked in sequence. As the panel rises in height, the end tabs of the horizontal plates and corrugation plates are slotted through two vertical side plates and secured into place. Because the alignments of each element are so precisely manufactured and configured, the resulting wall panel assumes its intended geometry with relative ease. Similarly, roof panels are assembled as a bottom plate, an internal layer of corrugation, and a top plate, and secured with tabs and slots. 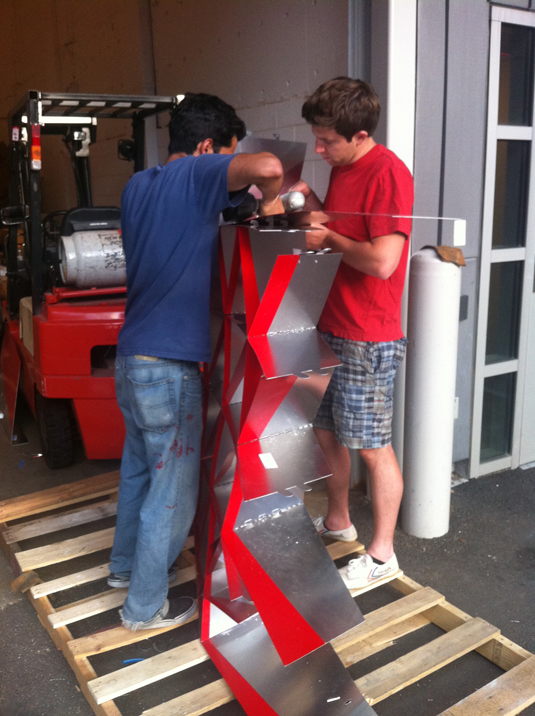 Assembly of the first wall panel confirmed that mechanical fastening of all tabs was necessary to maintain the rigidity of the 12-foot vertical panels against deflection. In certain situations, structural and aesthetic concerns necessitated additional fastening and bracing. This was accomplished through a system of custom pill-shaped tabs that would add robustness at critical intersections and corners. The insertion of doubled-up aluminum plate at strategic locations countered potential areas of deformation. Nearly all mechanical fastening is achieved with metal rivets, all of which required manual drilling and alignment of rivet holes. 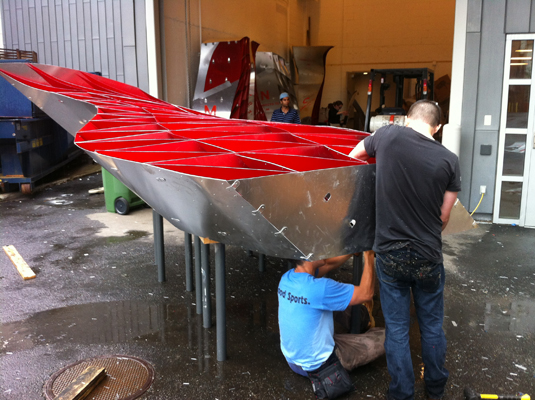 It was rare when we discovered a damaged, misaligned, or improperly painted brick. The part’s identity is located within our database, cataloged, and then re-cut and painted to best fit the actual assembly. The ability to edit and manufacture custom parts on demand to resolve unanticipated conditions is therefore critical for our production work and for the aesthetic value of the project. We are able to make adjustments as needed. 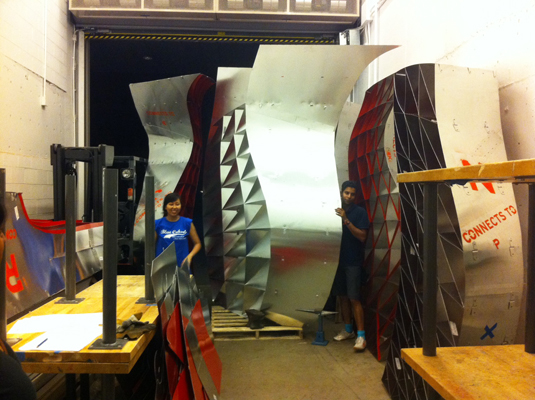 The scale and sequence of our operation permits the assembly of up to six completed wall panels in a single day. As panels and roof elements are completed, they are numbered, packed on a truck, and shipped to the New Haven Green or to the Yale Drama Department’s workshops for temporary storage. Curious passersby, including Yale students, staff, faculty, and our neighbors are intrigued to see that the parts are now at full scale. 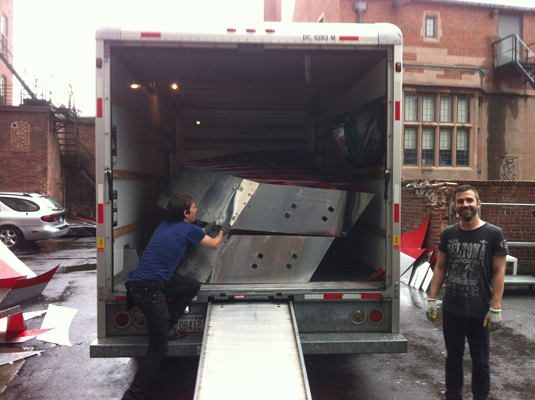 On the way to the site

Eric Zahn is a recent graduate of the M-Arch II program at Yale where he was awarded the Hilder Family Scholarship. Prior to attending graduate school, Eric worked in the Baltimore office of Ayers Saint Gross Architects and Planners. He received his B-Arch from Syracuse University in 2008, where he was awarded a Dean’s Thesis Citation and a Chancellor’s Award for Civic Engagement.