The Edible Schoolyard, Where Students Farm, Cook, And Learn

The Edible Schoolyard project brings farming and cooking into the classroom. 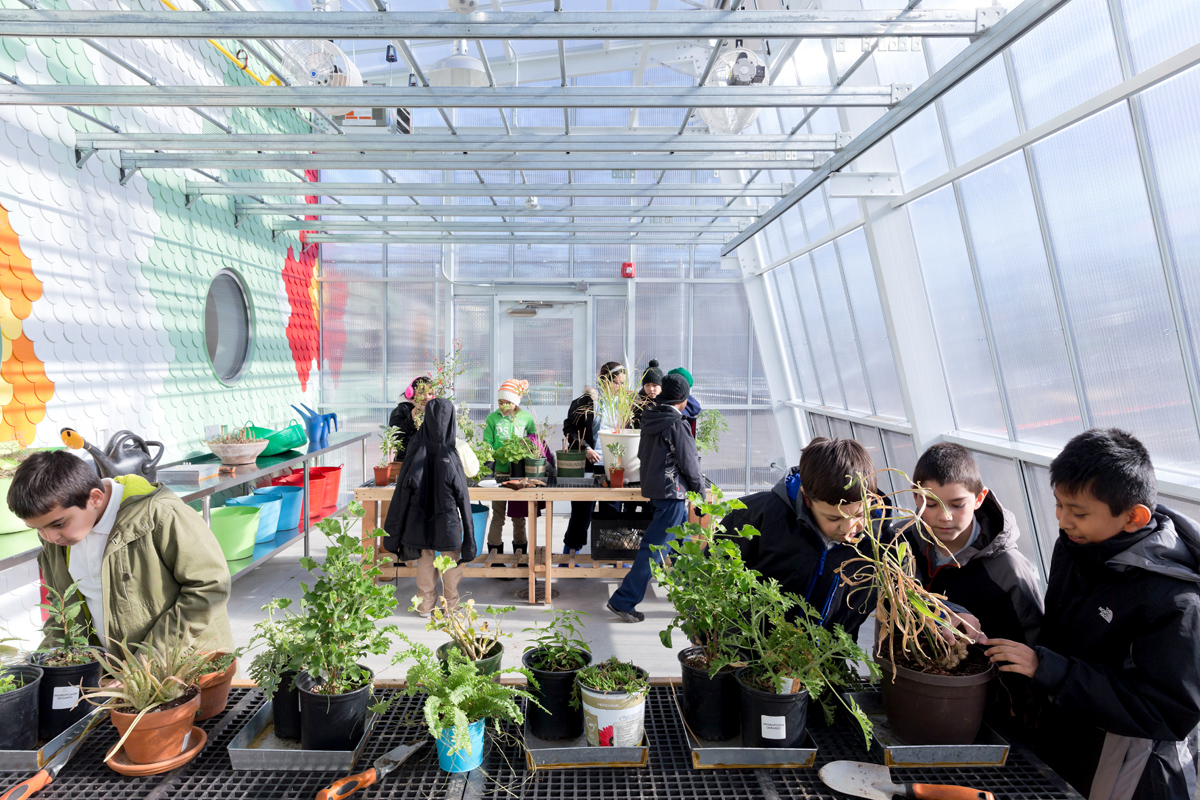 A class in progress in the first section of the project—a 763-square-foot greenhouse where kids learn how their food grows.

When I was a kid, I always dreamed of a water fountain that dispensed fruit punch instead of water. Food is often at the heart of the exaggerated idealism of childhood, and it plays a starring role in the new building and gardens at P.S. 216 in Gravesend, Brooklyn, by New York’s Work Architecture Company (WORKac). While the building is a relatively simple structure, designed to house a horticulture and culinary arts classroom, the architecture brings the program alive, making this more than your average shed.

Edible Schoolyard NYC partners with public schools to integrate organic gardening and cooking skills into the curriculum. WORKac was brought in after its successful 2008 “Public Farm 1” project for the MoMA PS1 Young Architects Program. “Even though it is at a domestic scale, the building has institutional ambitions,” WORKac’s Dan Wood says. “We really wanted to express larger ideas about food.”

At P.S. 216, students will attend the new classroom much like they would take a physical education or music class in a special facility. The project contains a full kitchen, where up to 32 students learn to make what they eat, using produce they have grown in the attached greenhouse and half-acre outdoor garden. WORKac brought in more than 1,000 cubic yards of organic soil from upstate New York to turn an existing parking lot into a garden, which produced 2,000 pounds of produce last year. 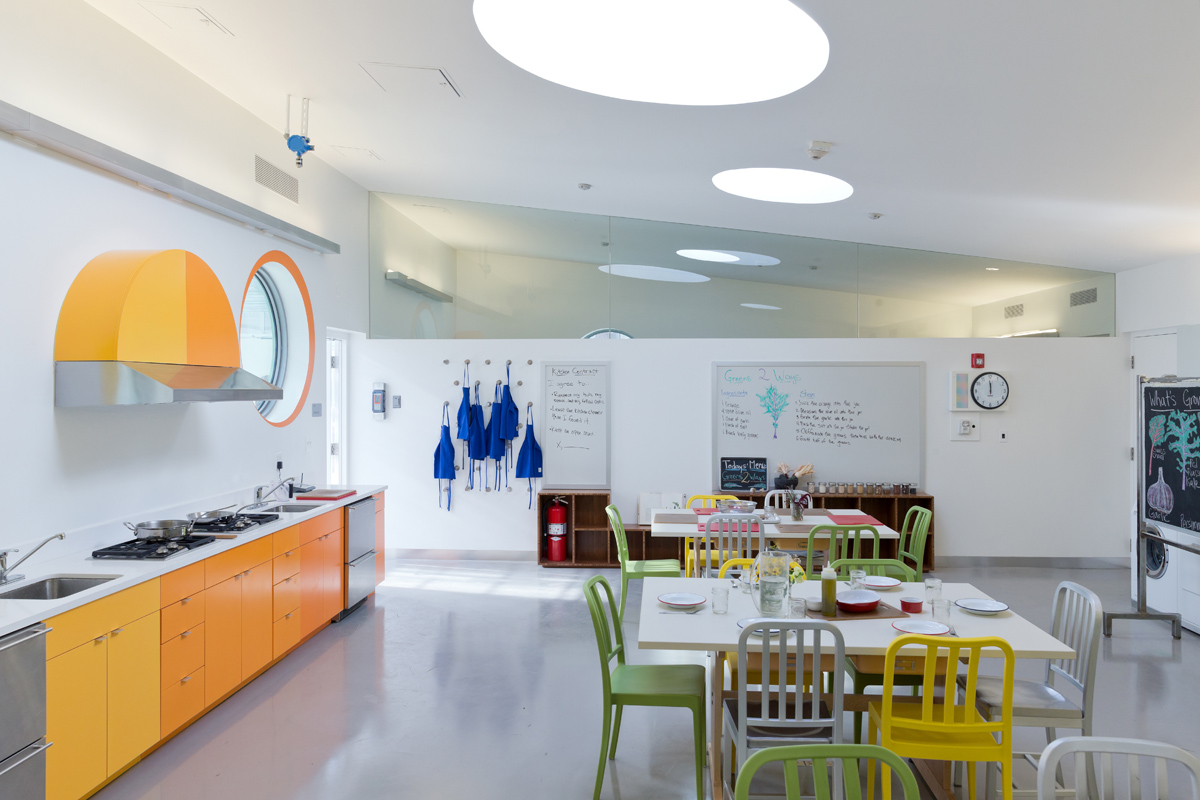 The second portion of the Edible Schoolyard project is a full-fledged kitchen area where children cook and eat their food.

The building does not stint on high-end features. The kitchen is fully equipped, including three full-size fridges and a waste-recycling station. In the greenhouse, students are treated to a four-season growing area and heated classroom space, growing tables, and a workstation with a sink, tabletop, and compost bins. A bright blue “systems wall” at the rear end of the kitchen houses all the building and site systems, including a toolshed, restroom, and a 1,550-gallon cistern that harvests rainwater to irrigate the gardens. 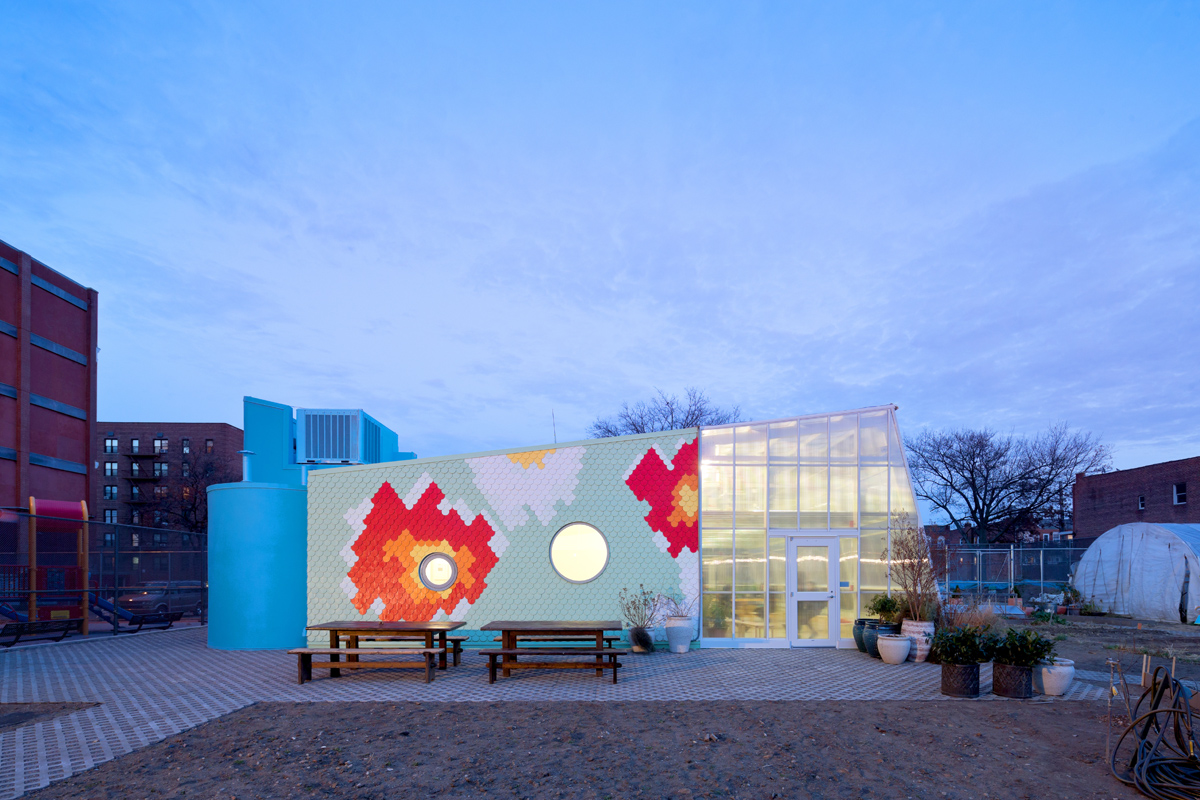 The third component is a blue systems wall (visible on the left end of the building), which has a rain-harvesting cistern to irrigate the gardens.

The structure illustrates the two components of the educational experience. The classroom is a solid volume, with the greenhouse sloping into it. Porthole windows allow students to see into the greenhouse from the kitchen, while a pattern on the walls—made up of closely laid cementitious shingles that read as pixels—can be glimpsed from outside through the high-performance polycarbonate, and continue on the external walls. This being a good souped-up shed, its pixelated patterns are an explicit reference to Robert Venturi and Denise Scott Brown’s work—they resemble the giant ﬂowers on the facade of the Best Catalog showroom.

The building extends the curriculum by helping teach the students about the processes of sustainability. For instance, a window into the cistern from the toolshed allows them to see the process of rainwater collection. “Almost everything is expressed,” the architect Amale Andraos says. “We were trying to be playful, but abstract at the same time.”